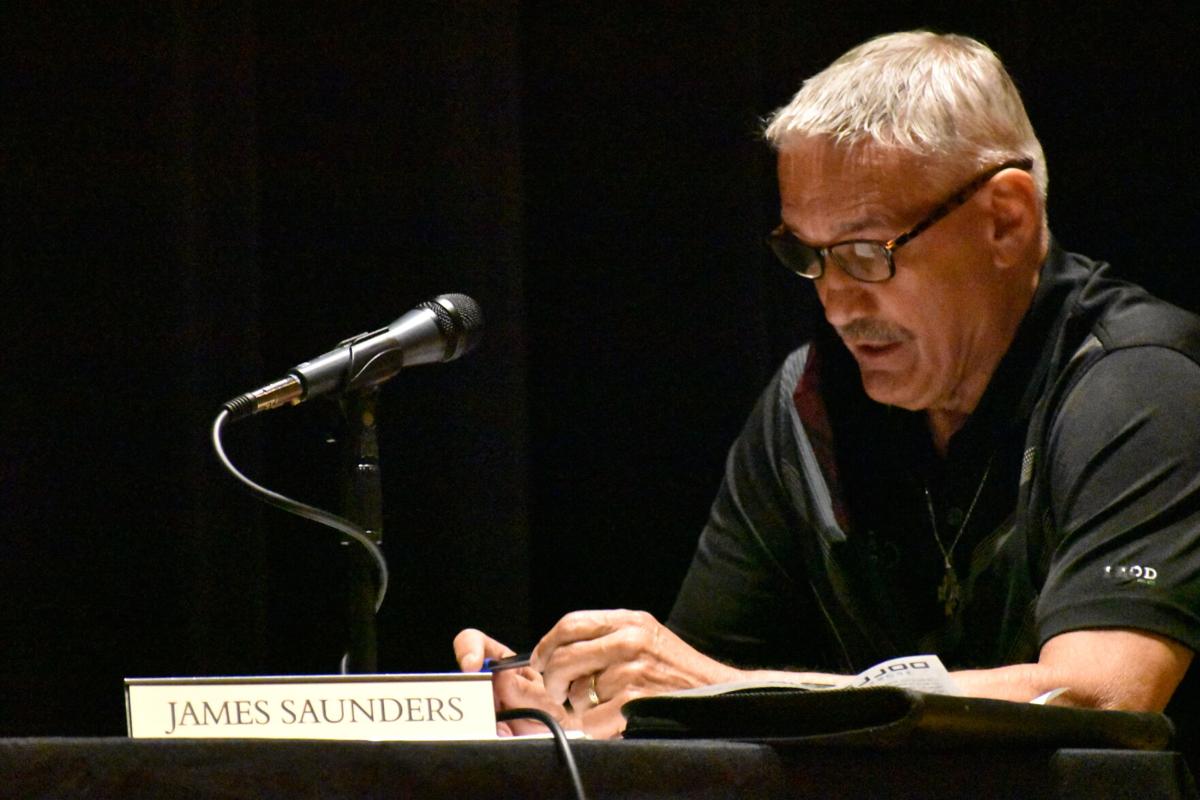 Marion County School Board Member James Saunders voices opposition to superintendent candidate Donna Hage who was approved on a 3-2 vote. 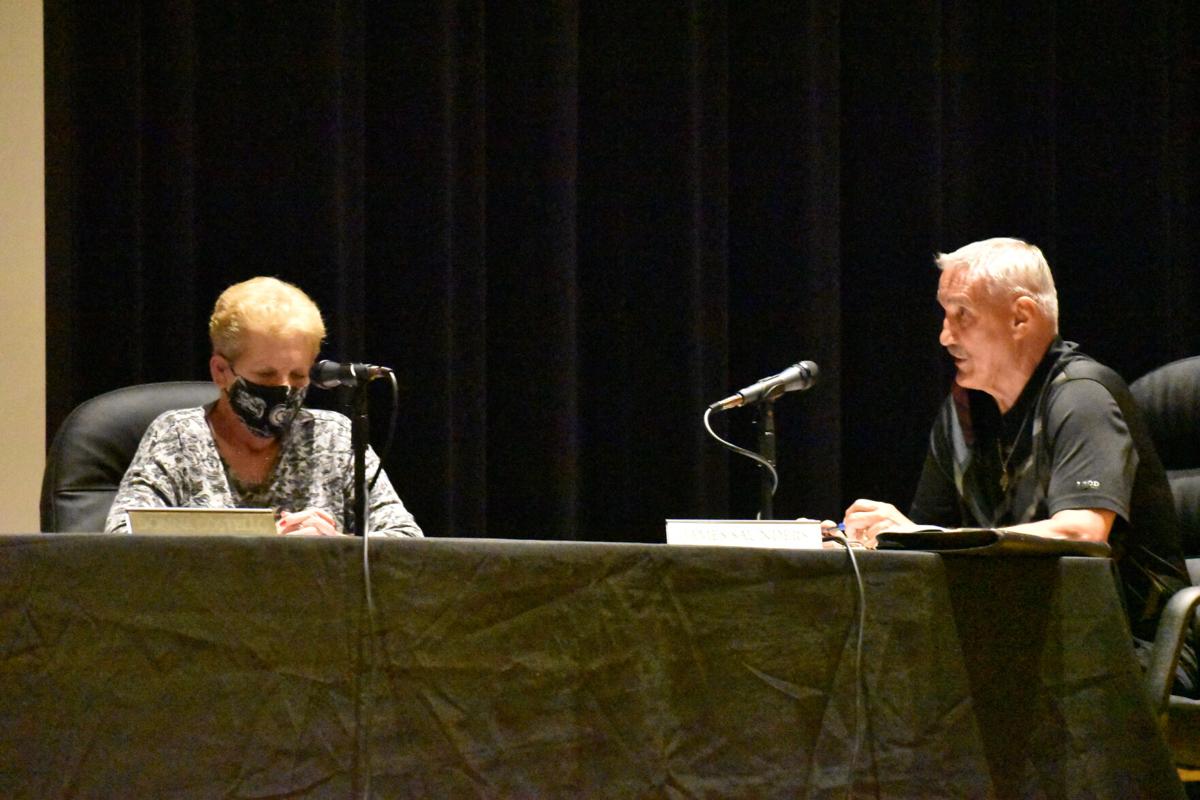 Marion County School Board Vice President Donna Costello, left and board member James Saunders, had a heated exchange Monday night after Saunders' said the process of selecting a new school superintendent was rigged. 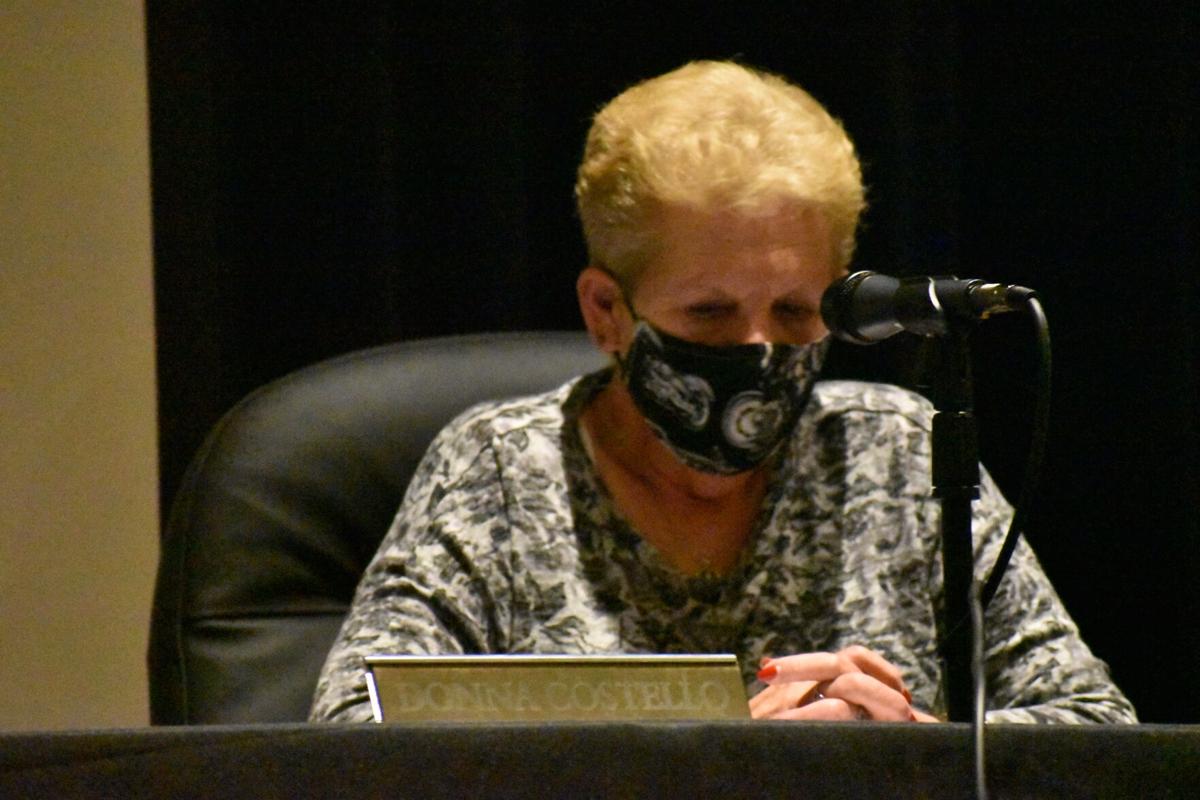 Donna Costello, vice president of the Marion County Board of Education, giving her thoughts about the superintendent candidate at Monday's meeting.

Marion County School Board Member James Saunders voices opposition to superintendent candidate Donna Hage who was approved on a 3-2 vote.

Marion County School Board Vice President Donna Costello, left and board member James Saunders, had a heated exchange Monday night after Saunders' said the process of selecting a new school superintendent was rigged.

Donna Costello, vice president of the Marion County Board of Education, giving her thoughts about the superintendent candidate at Monday's meeting.

FAIRMONT — In a split vote, the Marion County Board of Education has chosen Donna Hage to be the county’s next school superintendent.

There was much tension among the board members as a motion for the vote was put forward by Dragich. Once Thomas opened the table to comments from the board members, Saunders didn’t hold back his opinions.

“I pledged to the citizens of Marion County that I would hire the best candidate for the job,” Saunders said. “I personally believe we are not recommending the best.”

“This person will be directly leading some of the best principals in the state,” Saunders said. “I apologize to those principals that they will be working with a person that has never had their job.”

Saunders went on and said that Hage is not having her current position in Harrison County renewed.

In the middle of Saunders’ remarks, Costello made a motion to “call the question,” a motion which ends debate and brings the topic to a vote.

Saunders claimed Costello’s motion was baseless, as these were statements and not a debate, he went on to say, “You guys have already rigged this thing.”

A patch of chaos broke out between Costello and Saunders where the two continued talking over each other.

“Do not accuse me of rigging anything,” Costello said.

“Well I do, I accuse you,” Saunders said.

Thomas called to board back in order, suggesting an executive session. Saunders denied, saying this is on the agenda. He continued with his comments, questioning why Hage said she’s always wanted to work in Marion County but this is the first application he’s seen from Hage.

Pellegrin agreed with Saunders saying Hage was not the right choice. Both men indicated they would have rather recommended Chad Norman, a Marion County native, who is currently acting as an assistant superintendent for Marion County Schools.

Though they were the most outspoken, the naysayers at Monday’s meeting were in the minority.

“I make decisions based on what I think is in the best interest of the students and the employees and what is in my heart,” Costello said, defending her yea vote.

Saunders was quick to quip, “I don’t believe you, but go ahead.”

Despite his nay vote, Pellegrin said he will work with Hage to the best of his abilities, despite not considering her the best fit for the position.

“I know how the vote is going to go tonight,” Pellegrin said. “I will, after the vote tonight, respect [Hage] and work with her.”

Dragich said that while Hage may not have the experience some on the board were looking for, her skill set is, in his opinion, exactly what Marion County needs.

“[Hage] is very well versed in curriculum and I think this is what we need right now in the school system,” Dragich said.

After each member of the board spoke their piece on the subject, Thomas, spoke before calling for a vote.

“I believe that we are arriving at the absolute best decision we can in moving Marion County forward,” Thomas said.

Hage released a statement in the event she was selected for the position.

“I’m excited to hit the ground running and visit the classrooms, schools and worksites throughout the county,” Hage said in her statement. “This is a pivotal time in education, and I’m energized by what I see in Marion County and what we can all work together to build.”

Having served in her current position since July 2006, Hage holds a bachelor of science in English Language Arts Teacher Education from West Virginia University. She taught English in Taylor County Schools for 10 years after getting her bachelor’s degree. In 1998, she completed a master’s degree in special education from WVU and a doctor of education in curriculum and instruction in 2016 from Marshall University.

She will replace Superintendent Randy Farley who retires June 30.

Patsy Colisino, Jr., 64, of Farmington, passed away on Friday, September 24,2021 at Ruby Memorial Hospital in Morgantown. He was born April 9,1957 in Fairmont, a son of the late Patsy Colisino, Sr. and Margaret L. Markley Colisino. Patsy graduated from Fairmont State in the nursing program. …