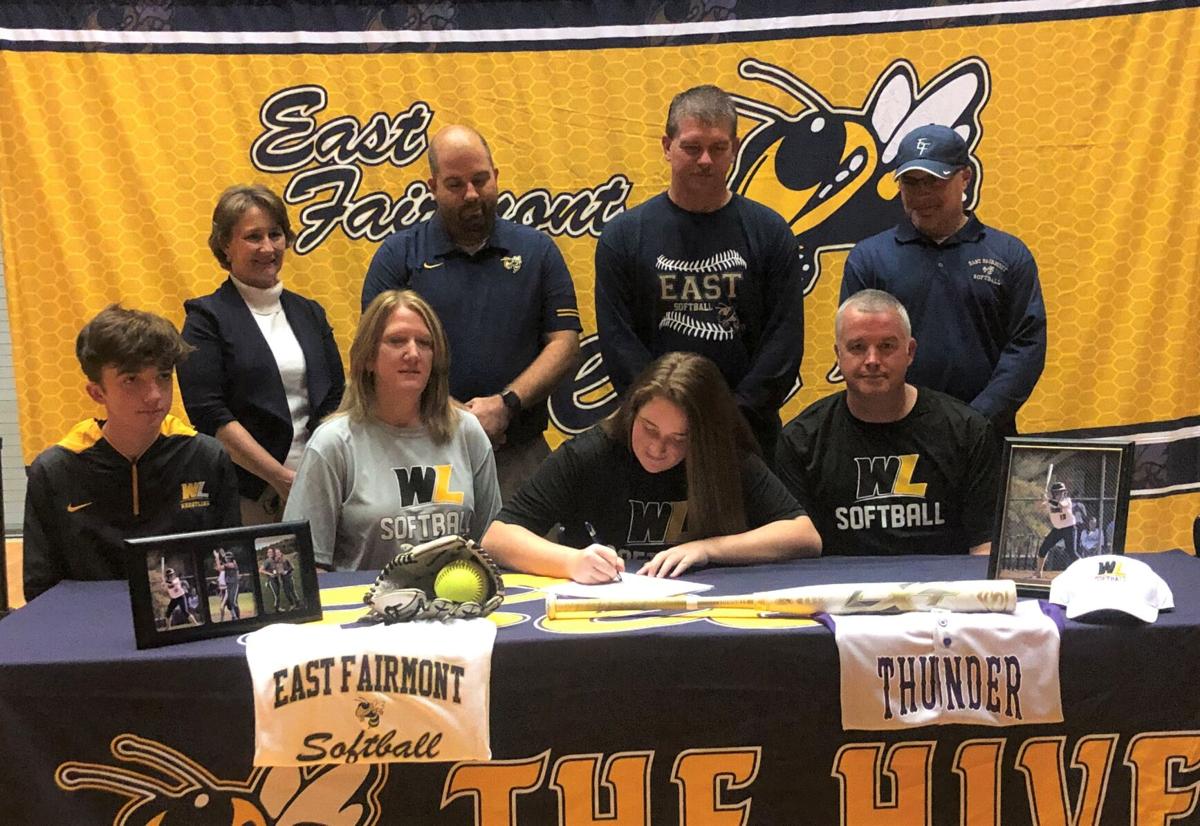 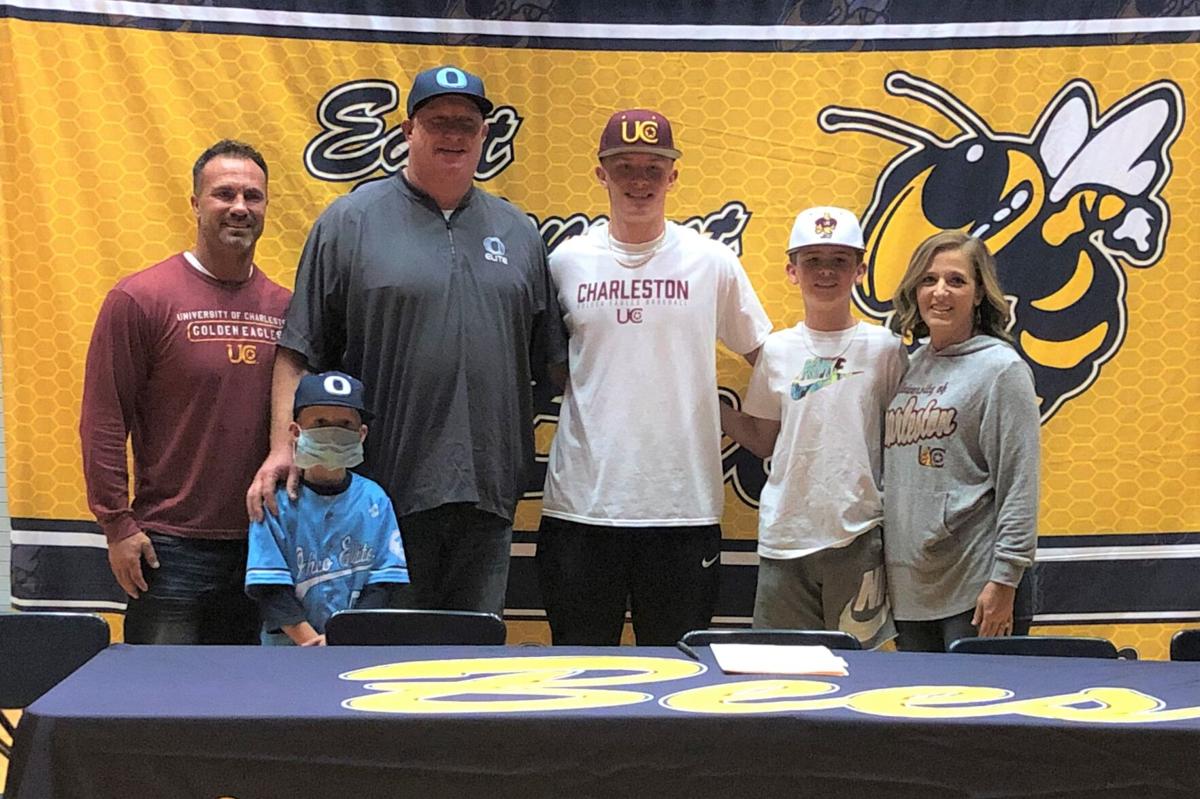 East Fairmont’s Cole Peschl, center, signed his National Letter of Intent to continue his baseball career in college at the University of Charleston. 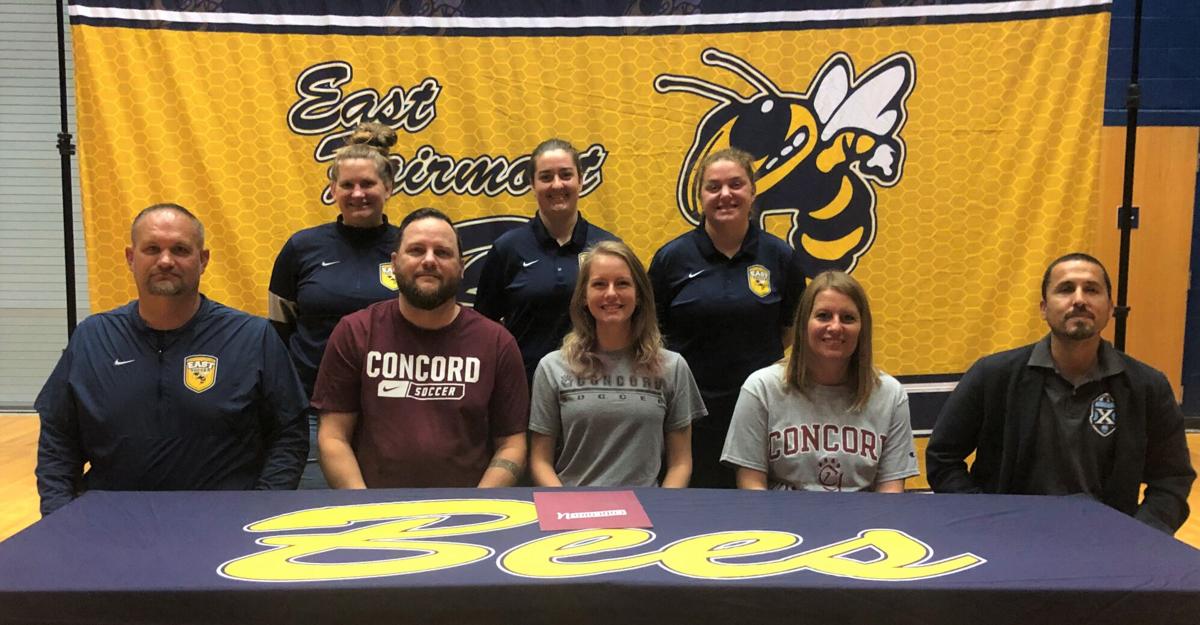 East Fairmont’s Cole Peschl, center, signed his National Letter of Intent to continue his baseball career in college at the University of Charleston.

PLEASANT VALLEY — Whether it’s the next step in a lifelong dream or simply an opportunity too good to pass up, East Fairmont seniors Kierra Bartholow, Lilly Miller and Cole Peschl signed their respective National Letters of Intent on Wednesday to continue their athletic careers at the college level.

Bartholow will be heading to West Liberty University, where she’ll continue what has been an excellent softball career at East Fairmont. Miller is moving on to Concord University to prolong her days of playing soccer after an impressive four-year run with the Lady Bees. And Peschl is prepared to make the jump to college baseball at the University of Charleston as he heads into the final season of his high school tenure at East Fairmont.

Bartholow, who will enter her senior season with the Lady Bees this spring, has played just two high school seasons of softball with EFHS, but her early success in her freshman and sophomore seasons combined with her travel ball career to this point has been enough to lead her into the college ranks.

“Once I decided I wanted to play softball in college, I reached out to a few colleges around here that I was interested in, and West Liberty was one of the first ones to get back to me,” Bartholow said. “I went up and visited and I really enjoyed the campus a lot, and I really liked the girls and the coaches. Just the whole atmosphere up there was really family-orientated.”

Throughout high school, Bartholow has proven herself to be a dynamic infielder and potent hitter, both with the Bees and her travel team. She has shifted between playing shortstop and third base in the field — something she said will likely continue at West Liberty — and she’s routinely hit around the top of the order. In her two seasons at East Fairmont, Bartholow hit .356 as a freshman and then .425 as a sophomore while tallying 40 total RBIs over that two-year period.

Bartholow and the Lady Bees’ 2020 spring season was cancelled due to the coronavirus pandemic, putting a potential damper on her recruiting, but she made up for the loss by excelling on the travel circuit, including in fall ball this autumn. All the while, she’s also maintained the grind with individual workouts to stay sharp in areas of hitting and throwing, she said.

Bartholow said she is still deciding between two potential areas of study in college in addition to her athletic career, and she said WLU’s programs in both was yet another major factor that led her to committing to the Hilltoppers.

“They have two programs that I’m really interested in and so I’m actually torn between the two right now,” she said.

Miller, meanwhile, is prepared to head to Concord to play soccer collegiately after just wrapping up her senior season on the pitch with East Fairmont, one in which she saw a brilliant career end on a personal high note with multiple postseason honors.

“I feel like it was a pretty successful four years,” Miller said of her career with the Lady Bees. “I feel like I’ve grown a lot since freshman year and really worked on technique and developing as a player from freshman year to now. I didn’t really make it a priority to make sure I went to college for soccer, I wanted to put education first, so to still be able to go for soccer is really nice considering I’ve been playing for so many years.”

Miller, who was a senior captain for East Fairmont at defensive center midfielder this season, was one of the Bees’ team pillars this fall. She was recently named to the West Virginia High School Soccer Coaches Association all-state second team and all-region first team for her performance this season. Miller, who scored five goals and recorded seven assists, was a linchpin in the midfield for EFHS connecting its defense and offense, and because of her big leg, she also took the majority of the team’s free kicks.

“It was a really fun four years,” Miller said of her time with the Lady Bees. “I cherish all the memories. I’ll miss it.”

Miller will now move on to Concord, where she said she plans to study health sciences in addition to her athletic endeavors.

Finally, Peschl signed with the University of Charleston to take his baseball talents to the state’s capitol as the next step in what he said he hopes is just the beginning of his post-high school career on the diamond.

“It’s always been a dream of mine to play college baseball and hopefully play pro baseball after this,” Peschl said. “This is just the first step.”

In his two seasons at East Fairmont as a freshman and sophomore, Peschl has already showcased a big-time level arm on the mound as a pitcher, but it’s what he’s been able to do on the travel circuit that’s really made him into a coveted pitching prospect at the college ranks.

Like every other baseball player in the state, Peschl saw his junior season at East Fairmont this past spring wiped out because of the coronavirus pandemic, but he was still able to put his strides as a pitcher on display during the club season with Ohio Elite. Peschl said Charleston’s interest actually stemmed from a game he pitched at a travel tournament in Atlanta, where he was dealing.

“I ended up throwing a really good game and (Charleston) Coach (Robbie) Britt called me after and talked to me,” said Peschl, who plans to study either sports business or another business-related field at UC. “Then a couple of months later I went down for a visit, and I loved everything about the school — I loved the family feeling there, the team, all the coaches and the campus.”

Before Peschl joins the Golden Eagles, however, he’ll get one last go round with the Bees as a senior this spring, pending the ongoing COVID-19 pandemic. In his most recent with East Fairmont, Peschl was fabulous on the mound, posting a 1.94 ERA and a strikeout rate of 8.3 per seven innings as a sophomore.

“After signing (to play in college), I’ve really been thinking about everything that has happened in high school and just remembering everything,” Peschl said. “I can’t wait for this next season — it should be a fun one if we can have it.”