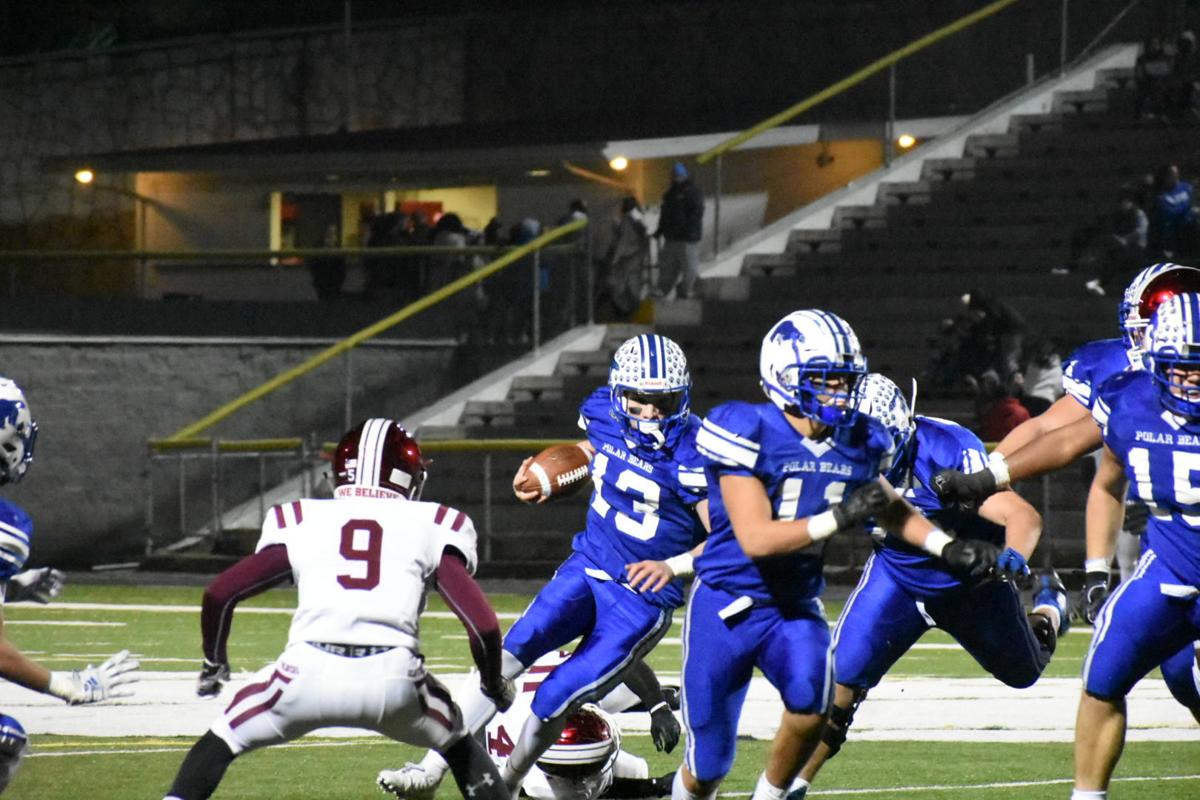 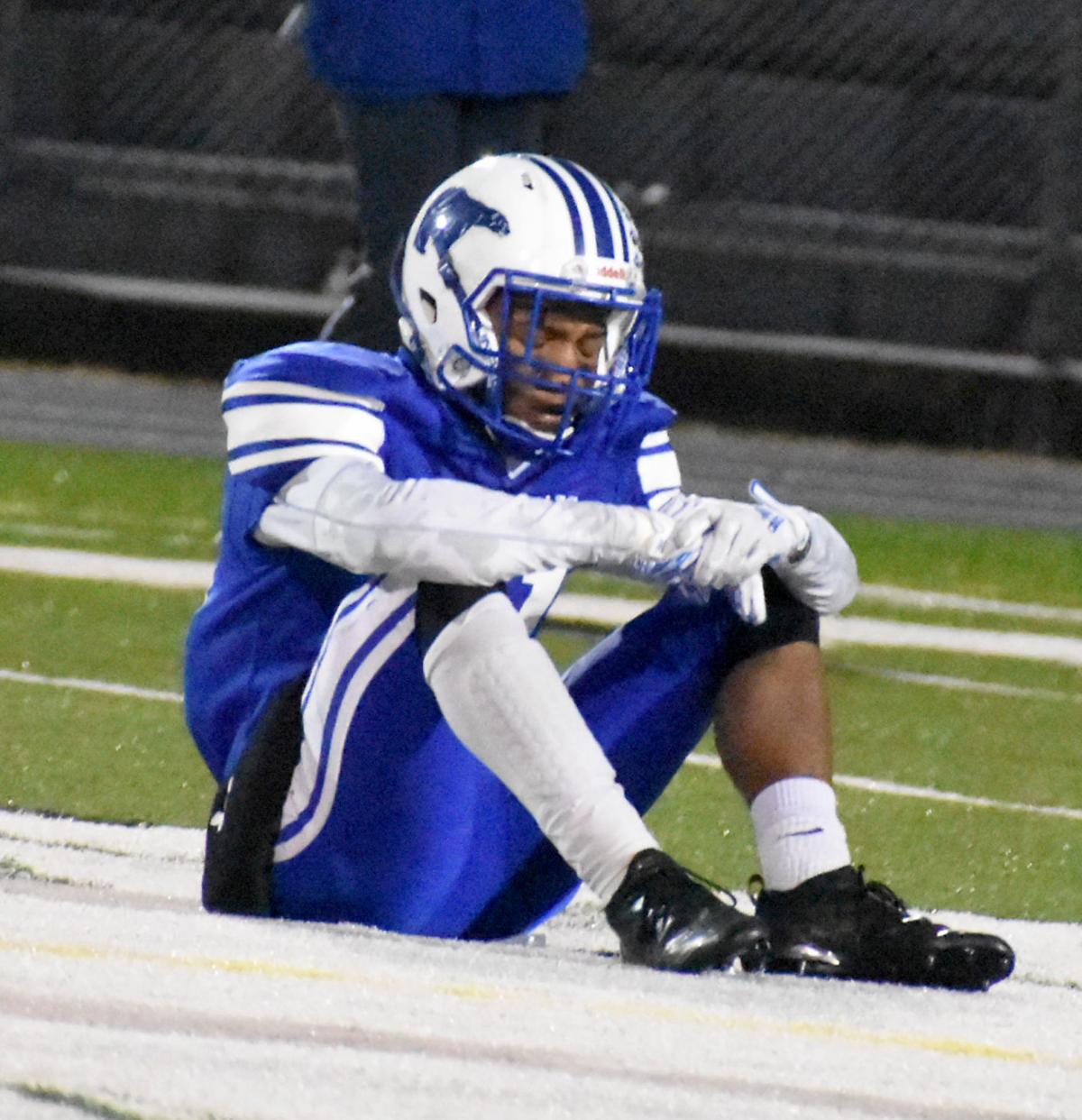 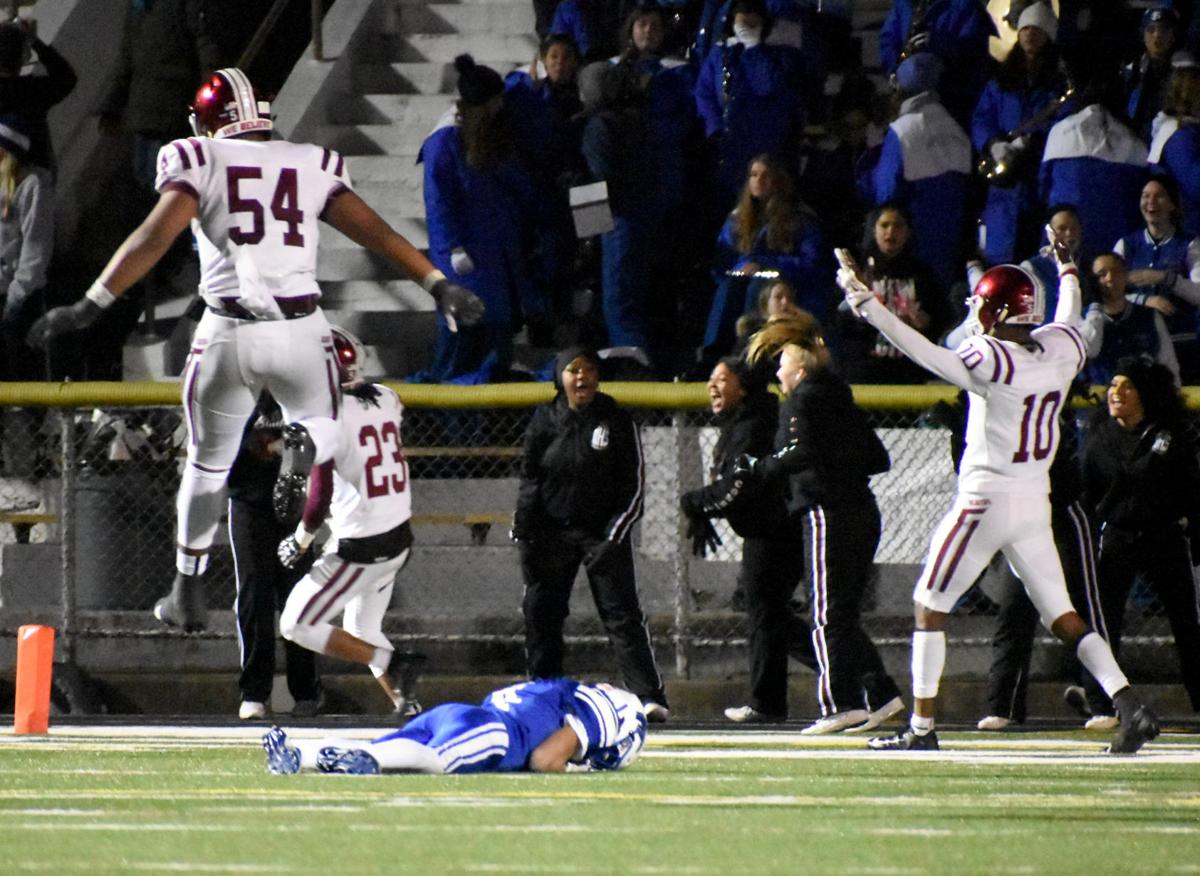 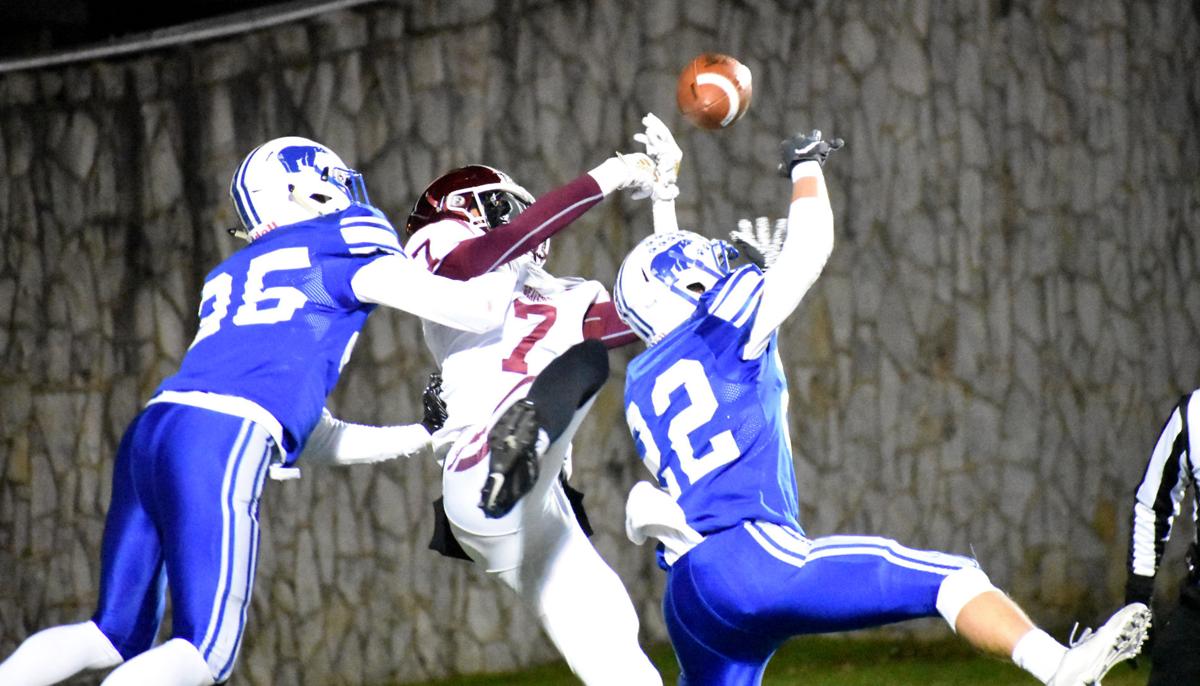 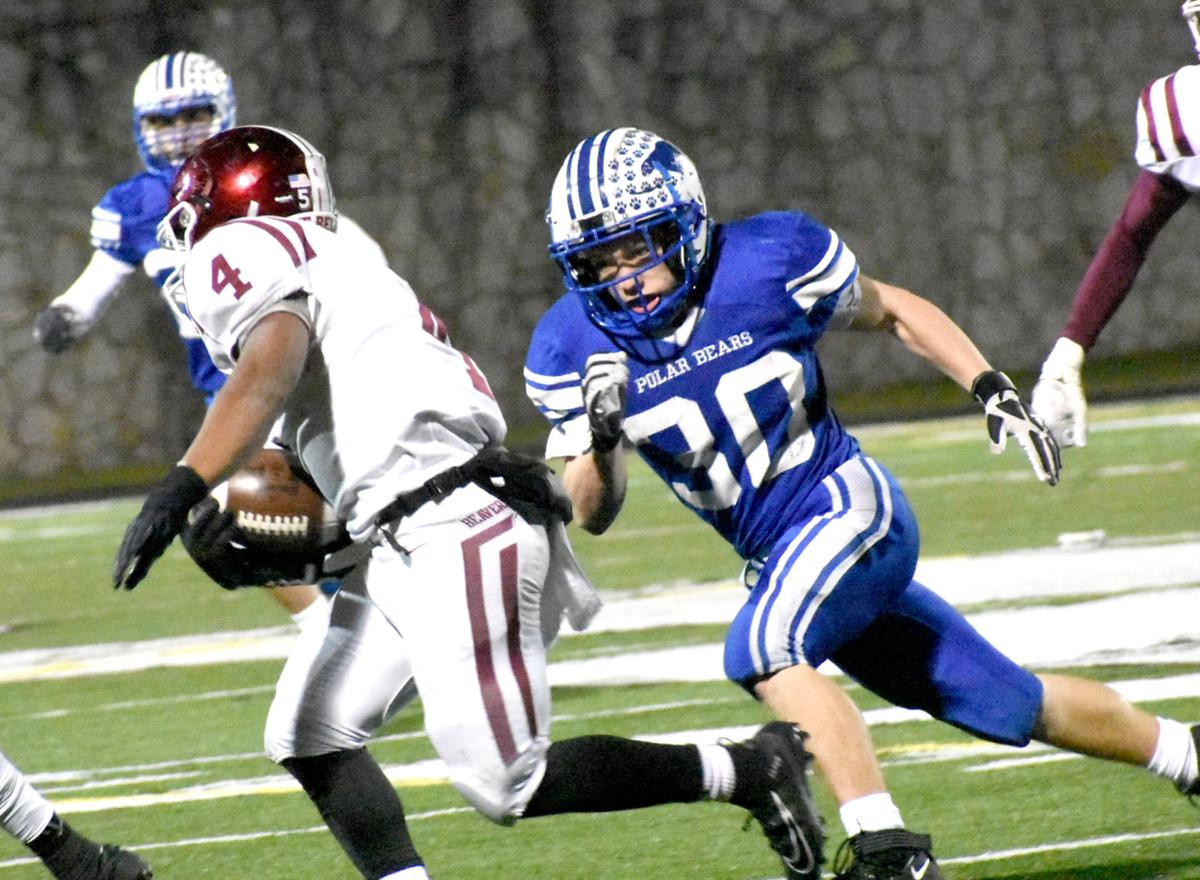 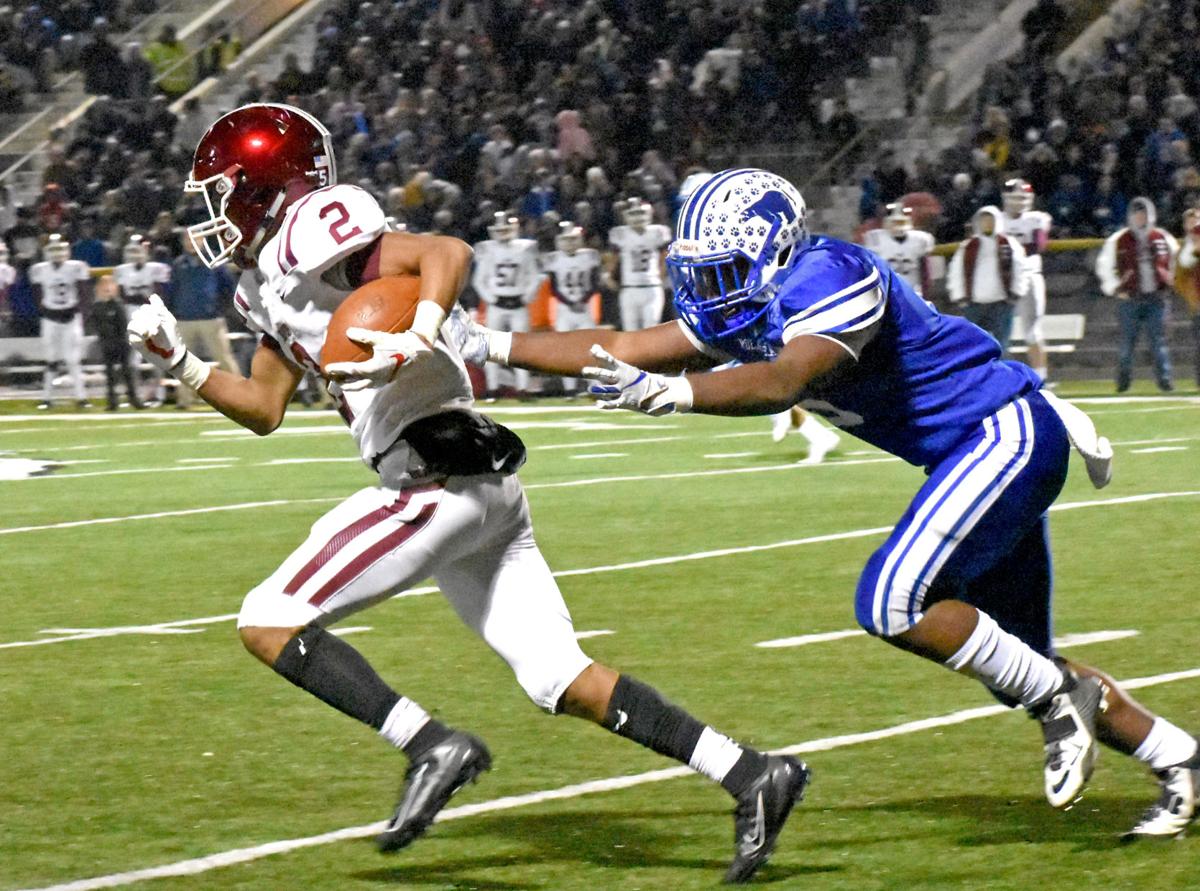 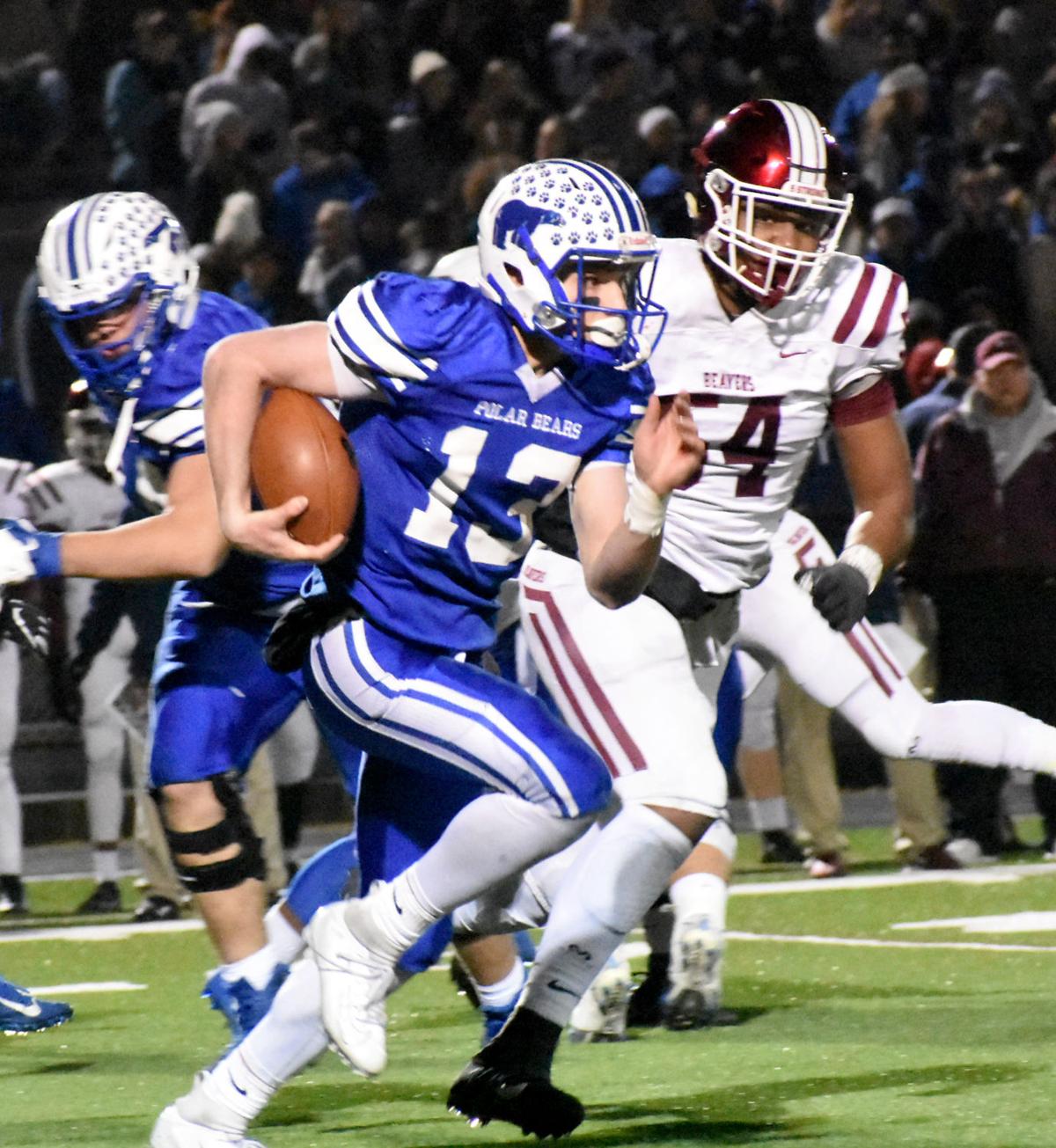 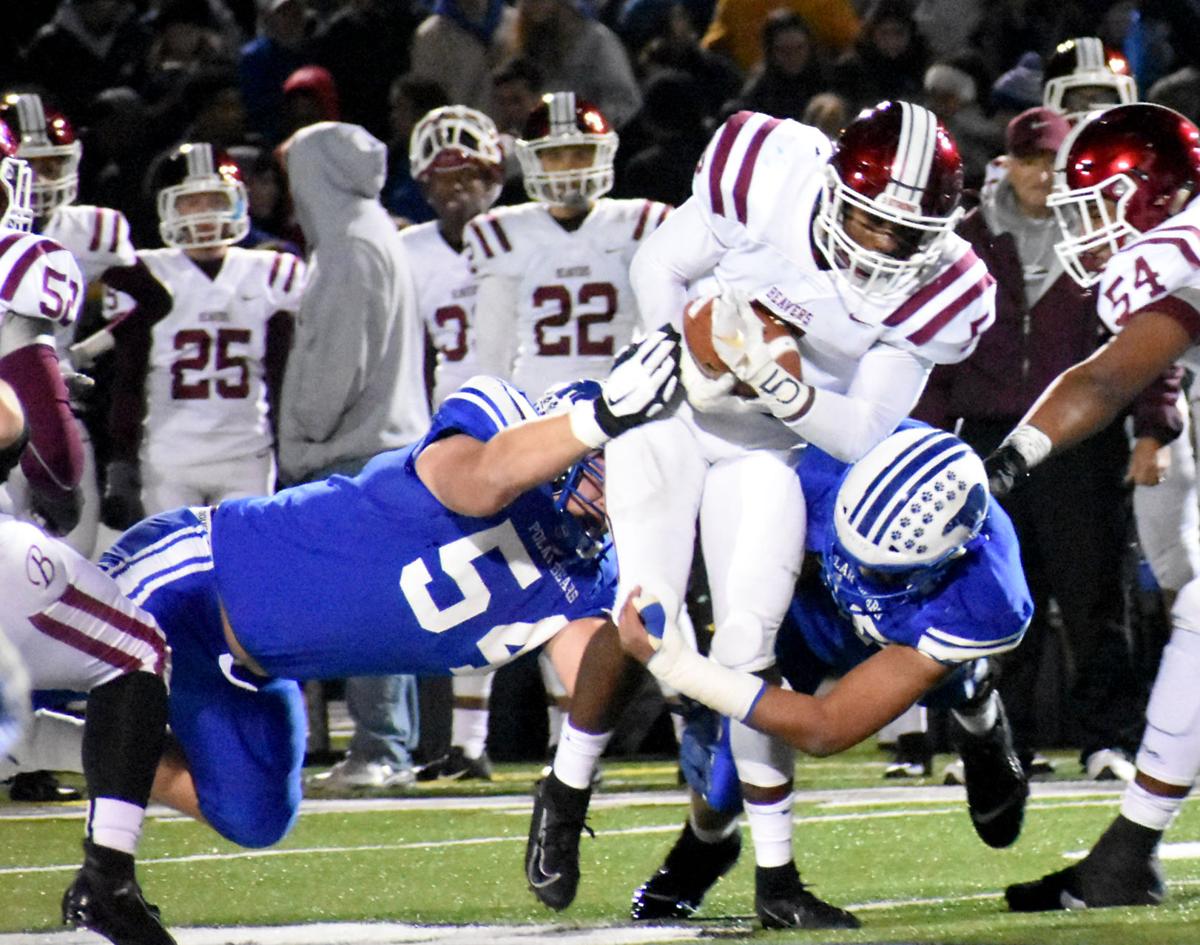 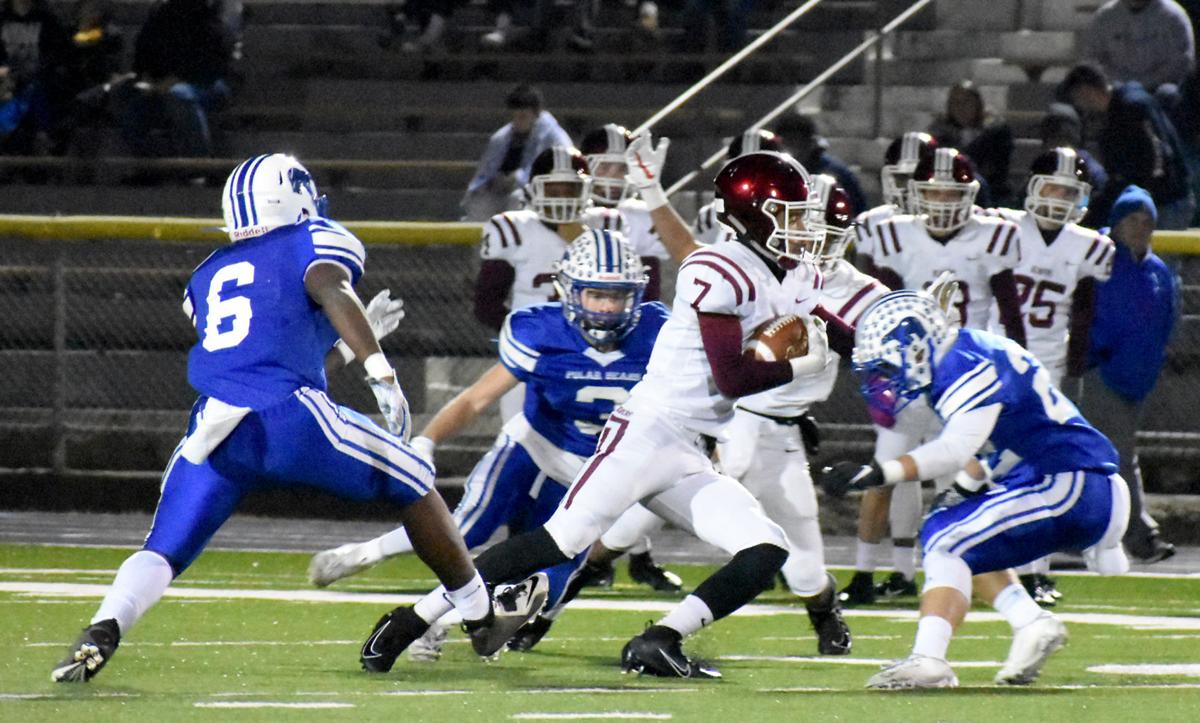 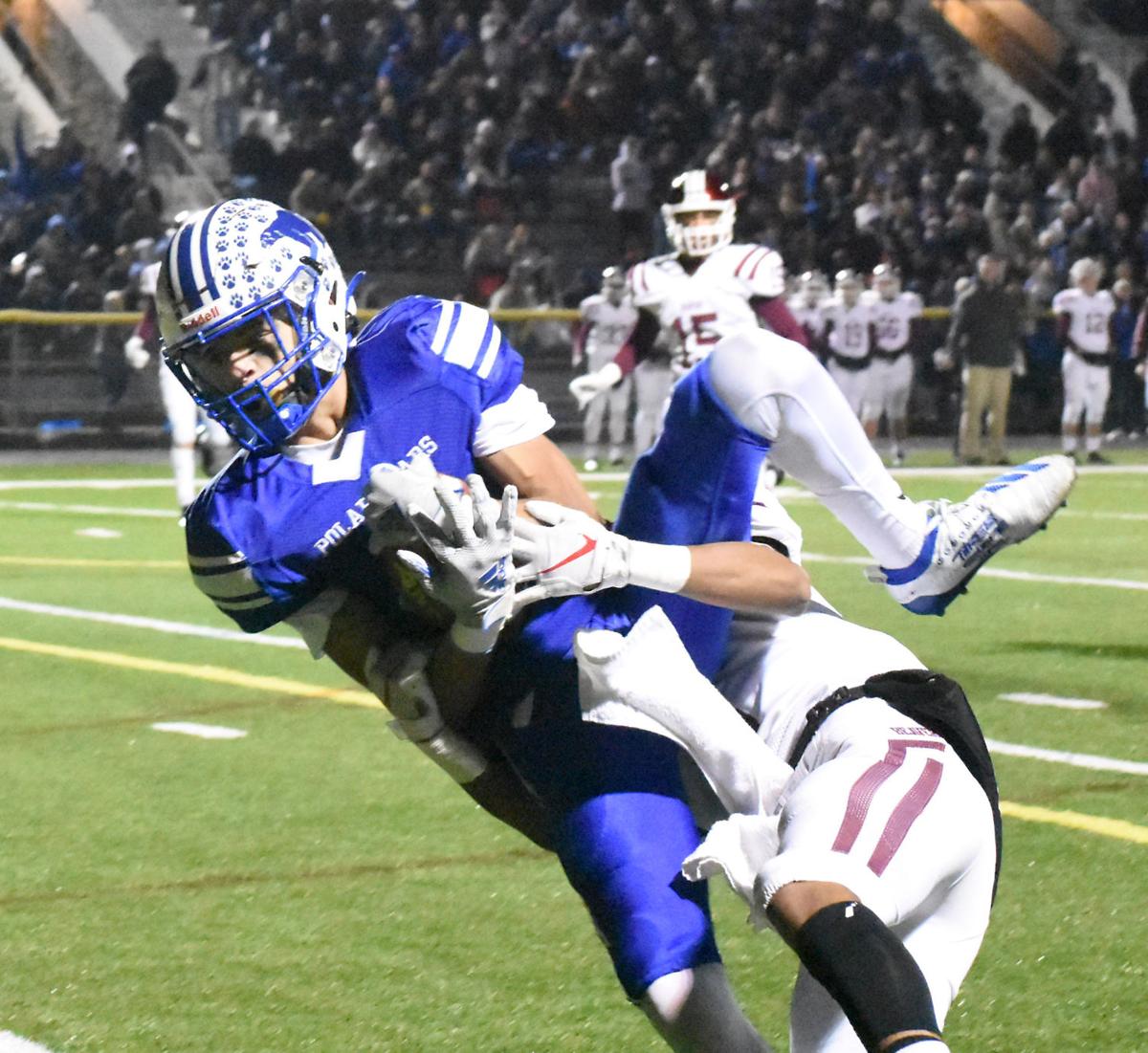 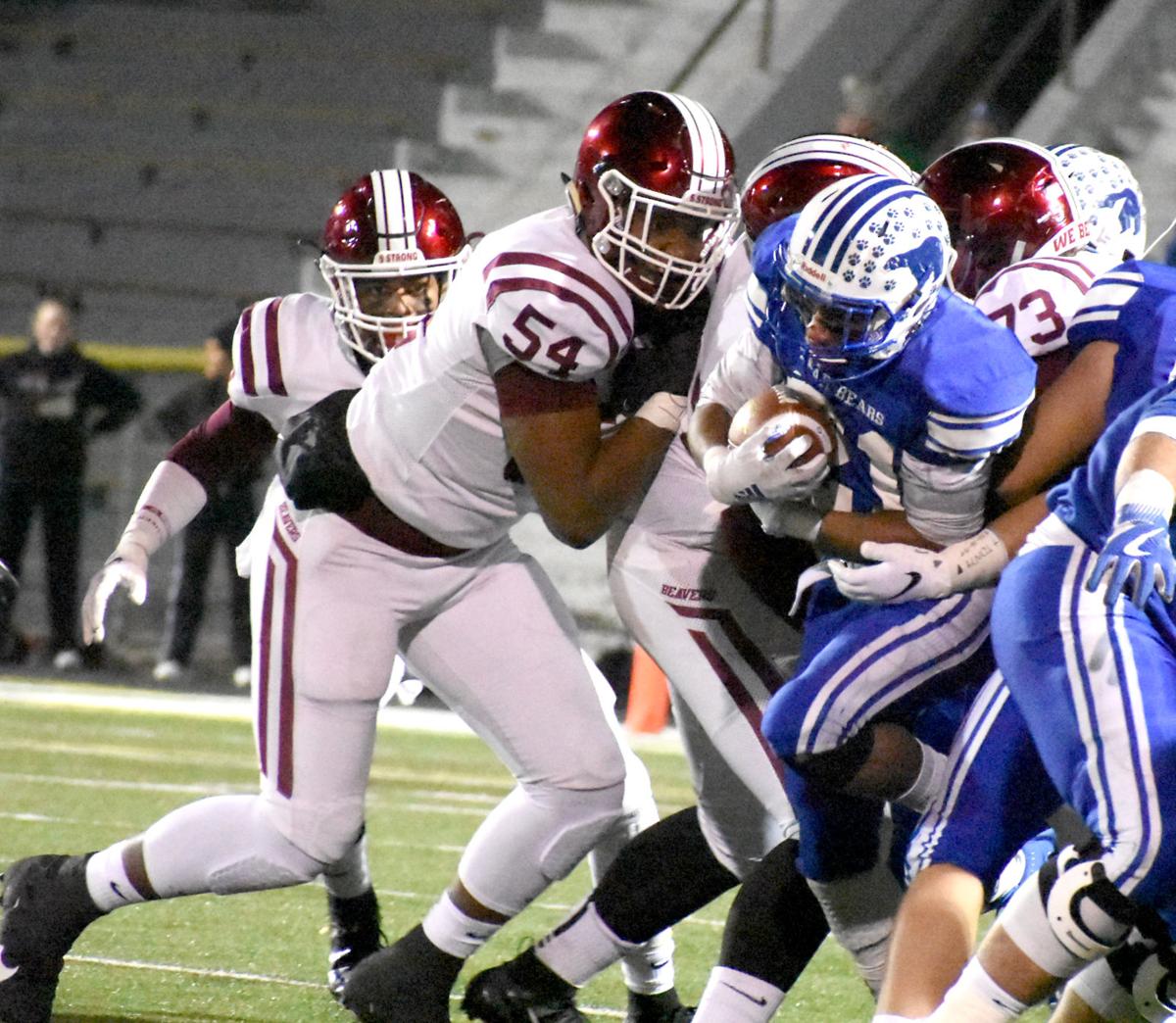 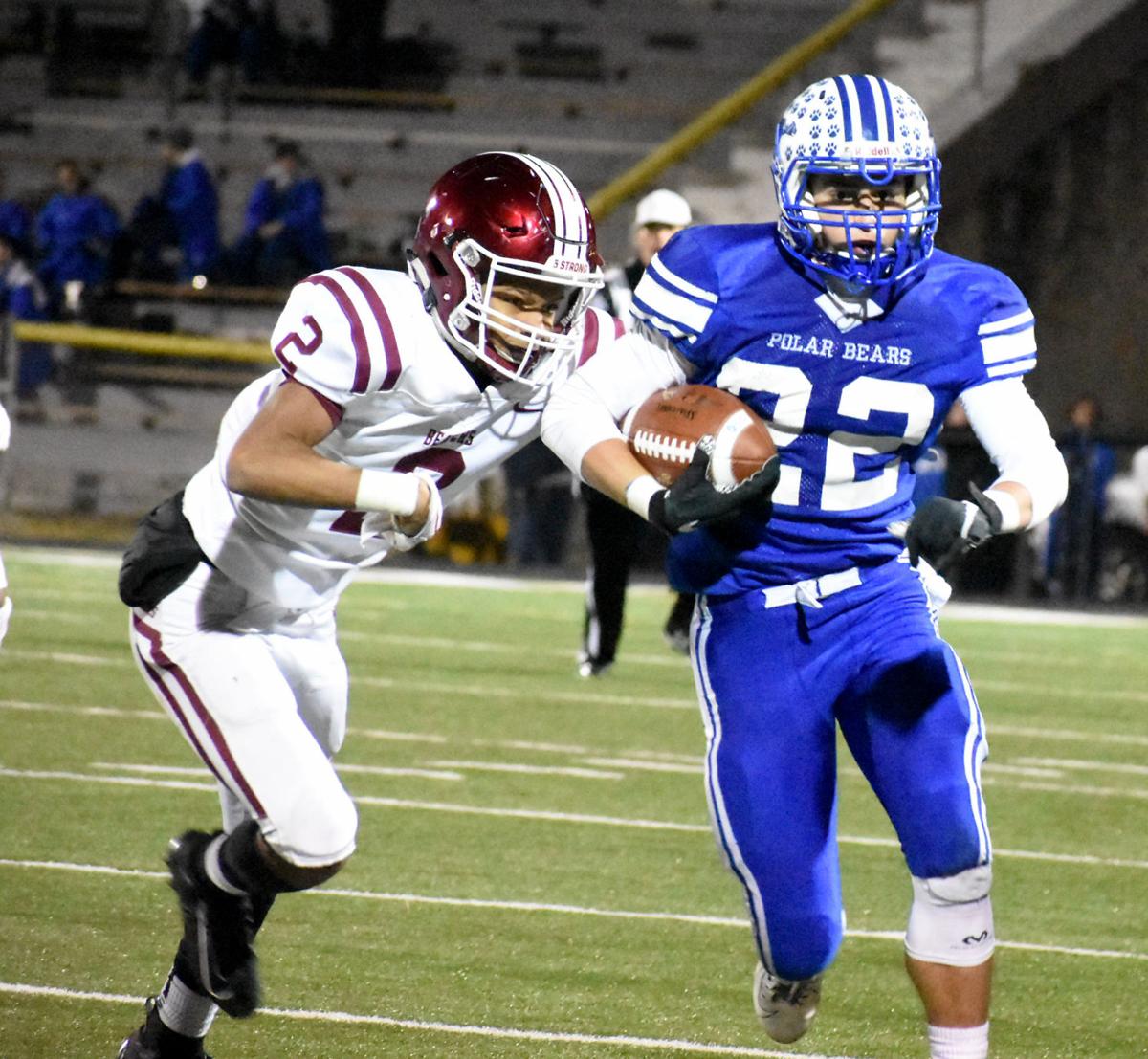 FAIRMONT — With Fairmont Senior on the precipice of a historic fourth-consecutive appearance in the Class AA state championship game, it was the No. 1 Polar Bears’ fiercest foe over the course of their record-breaking run who ultimately spoiled their party on 12th Street in Friday’s state semifinal.

Bluefield, which split back-to-back state title game meetings with FSHS the past two seasons, marched into East-West Stadium and triumphed on Friday in a 40-24 gut-check victory to avenge its 2018 state championship game loss to the Polar Bears and book a third straight trip to Wheeling Island Stadium.

The No. 4-seeded Beavers, who snapped Fairmont Senior’s 26-game win streak with the victory, will play the winner of today’s other semifinal between No. 6 Oak Glen and No. 2 Bridgeport in the Class AA state championship on Dec. 6.

“I’m so proud of them,” said Bluefield head coach Fred Simon, who will go for his sixth career state championship in 34 years as the Beavers’ head coach next Friday. “To come in here and win, we knew how tough it was going to be and I’m very proud of our players to be able to pull that off. We’re fortunate, we’re happy and we’re humble.”

“Our guys fought the whole game. We were one bounce away from an opportunity to get back in the game and make something happen, but we never got that break,” said Fairmont Senior coach Nick Bartic, whose Polar Bears suffered their first home loss since a 17-14 loss to Bridgeport in Week 9 of 2016. “They did a good job of having a game plan and they executed well. They made the plays, and, ultimately, we didn’t.”

Fairmont Senior outgained Bluefield 436-328 for the game, but a combination of ace special teams play and a plus-3 turnover margin evened out and then overtook the game for the Beavers. Well that coupled with star running back/linebacker JJ Davis and a nuclear set of Beavers playmakers who also had the attitude and fight in grimy trench warfare against a vicious Fairmont Senior front.

Davis ripped off 151 yards and a touchdown on 28 carries, while also nabbing a game-changing interception midway through the second quarter, as Bluefield’s offense ticked off five touchdown drives over a six-series span to pull the Beavers ahead 34-17 with 11 minutes to go in the fourth quarter. Along with Davis’ 151 rush yards, Bluefield quarterback Carson Deeb went 12-of-17 for 171 yards and four TDs with zero turnovers, while Brandon Wiley and Jahiem House each hauled in a pair of TD grabs.

“They do a good job of keeping you off balance with how they run the ball to the edge, use their bubble screen game, and throw it up to House,” said Bartic. “So when you’re trying to take something away, you get into a cat-and-mouse game and we didn’t get enough stops.”

Junior linebacker Shawn Mitchell was the standout on the Bluefield defense, as he gobbled up three sacks, a tackle for loss, and a pick six on the final play of regulation while spending the bulk of the night spying Fairmont Senior Kennedy Award candidate quarterback Gage Michael.

“That little guy, I call him ‘Mongoose’ because he attacks cobras and everything else,” Simon said of Mitchell. “He’s only 5-foot-4, about 160 pounds, but he’s all over the field. He’s what makes football such a great sport. He plays with everything you could want a player to play with.”

Michael led Fairmont Senior’s attack, with the junior quarterback rushing for 173 yards and a TD on 33 attempts, while also going 16-of-24 passing for 227 yards with a pair of TDs and a pair of interceptions. Michael, who was still dealing with a lingering ankle injury, was also sacked four times and lost a fumble, all with Fairmont Senior in comeback mode down multiple scores in the fourth quarter.

“It’s just guts,” Bartic said of Michael. “It shows how tough he is; he’s not 100 percent, but he sucked it up and was battling. It’s one of the gutsiest performances.”

Michael’s gritty effort got the Polar Bears out to an early 7-0 lead as he directed a seven-play, 65-yard march on the game’s opening series, which included a 4th-and-1 conversion on a QB keeper by Michael in his own territory and a 37-yard hook-up to wideout Kayson Nealy who elevated to snag the pass over a Bluefield defender. Nealy posted a game-high seven receptions for 127 yards and a TD for the Polar Bears.

Bluefield sliced the FSHS lead to 7-6 early in the second quarter on a 14-yard TD pass to House as the Beavers ticked off an 11-play, 69-yard drive that was aided by three Fairmont Senior penalties, including a drive-extending pass interference on third down.

The Polar Bears steadily stitched together a 10-plus-play drive in response, but with FSHS at the Bluefield 11 yard line, Davis made — or was gifted rather — the play that most will label as the game’s swing point. He dropped into underneath zone coverage, went undetected by Michael, and plucked an interception that was thrown right to him.

“He’s a game-changer. We’re fortunate to have him,” Simon said of Davis. “They get a touchdown there and we’re hurting. You got to make big plays in games like this and we did.”

Bluefield, which had scoring drives of 69, 85, 68, 26 and 74 yards on the night, flipped the pendulum the other way with its score on the ensuing series. The touchdown drive was fueled by a pair of third down sweeps to Davis off the right side that went for 29 and 27 yards, respectively, with the second ending in a house call to give the Beavers a 13-7 lead they would never relinquish.

A busted coverage by the Polar Bears on Bluefield’s very next offensive play let Wiley loose down the sideline and Deeb took full advantage with a 68-yard TD strike to balloon the margin to 20-7 with just over a minute till the half. Michael saved face a bit for Fairmont Senior with a peppering of quick-hitting keepers in the two-minute drill that yielded a 32-yard field goal from Frankie Smith to cut the deficit to 20-10 at the break.

Both offenses went three-and-out on their opening second-half drives, but Fairmont Senior’s defense — which was led by eight tackles from Nate Kowalski, six tackles by Malachi West, and five stops by Zach Frazier, all with a tackle for loss apiece — couldn’t sustain against the multiple layers and options of Bluefield’s attack.

“They have so many matchup problems,” said Bartic of Bluefield. “The guys they have, the athleticism....you can’t really simulate that. And they do a good of exploiting those mismatches.”

“We’ve been able to do it all year,” Simon said of the team’s multi-dimensional elements. “When people are getting on JJ, we can throw it with Carson, who’s done a nice job of hitting multiple receivers. I think our receivers have caught almost like 35 catches apiece, so it’s not like you can pick one out and say, ‘This is the man you got to stop.’”

Even with Frazier — who spent the night splintering Bluefield double teams with multiple efforts en route to constant penetration — hurrying Deeb on several occasions, Bluefield’s passing game couldn’t be curtailed. Wiley was the game breaker as he caught 68-yard and 26-yard TD grabs, House was the 1-on-1 mismatch, hauling in both of his scores after re-calibrating on balls in the air against FSHS defensive backs, and Juwaun Green and Jacorian Green were the go-to targets on the bubble screens, combining for 50 yards on seven receptions.

Wiley’s second TD, which made it 27-10, was answered by a 10-play, 80-yard drive by the Polar Bears that capped off with a 12-yard pass from Michael to Camden Longwell to keep Fairmont Senior alive.

But on Bluefield’s next series, Fairmont Senior absorbed a gut punch too many. First, Bluefield converted a 4th-and-6 by a razor blade, and then the Beavers got a first down inside the 10 when they recovered their own fumble for an 8-yard gain. It culminated in a 17-yard jump ball touchdown to House to make it a three-score game with just 11 minutes to play, thus essentially eroding away the Polar Bears’ shot at a fourth straight championship game appearance and repeat title bid.

“They’re going to leave as the most decorated senior class,” Bartic said of FSHS’s fourth-year players, “and what they’ve meant to our program in terms of getting us to the level we’re at, they’re going to be a group that is gonna be talked about for a long time around here.”