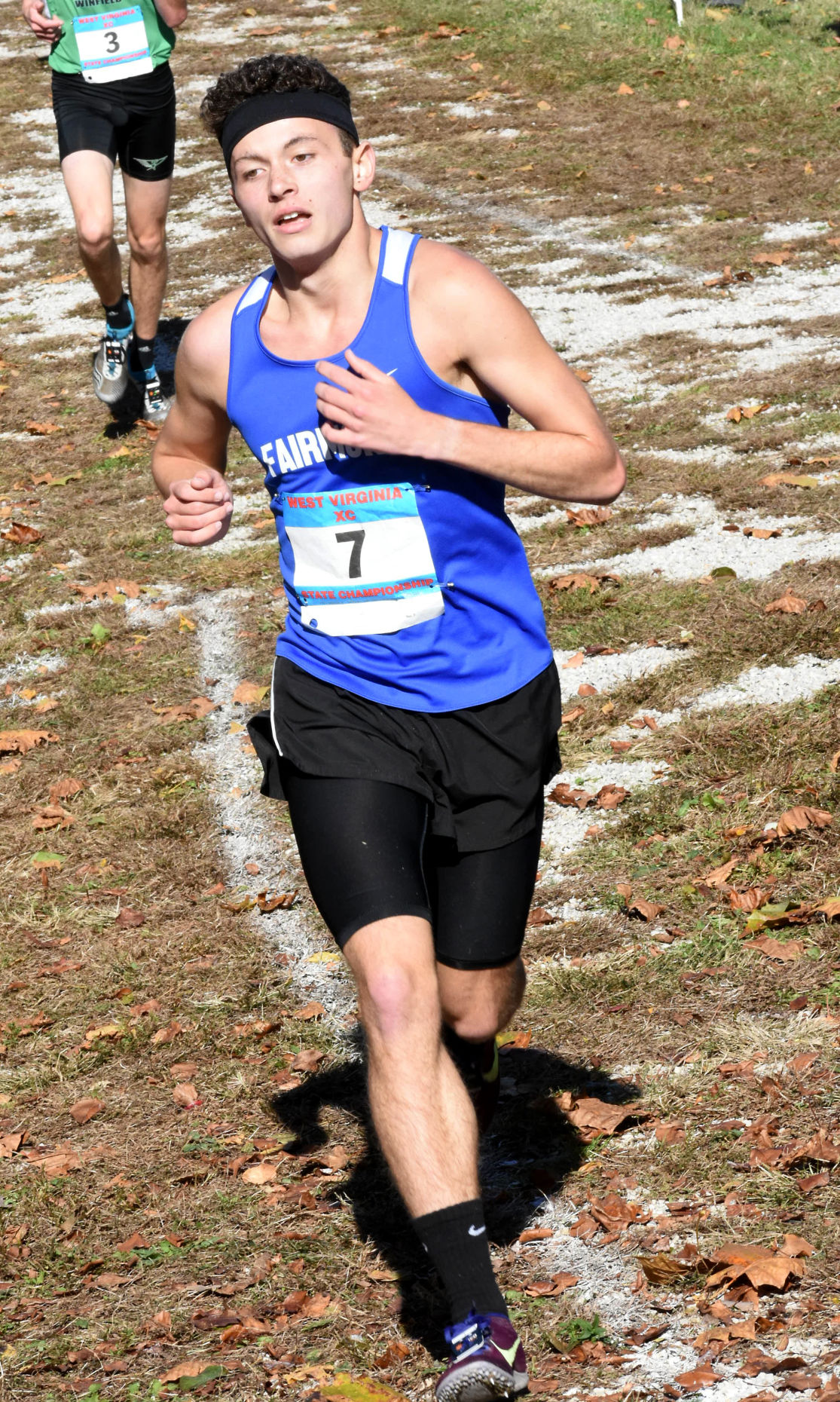 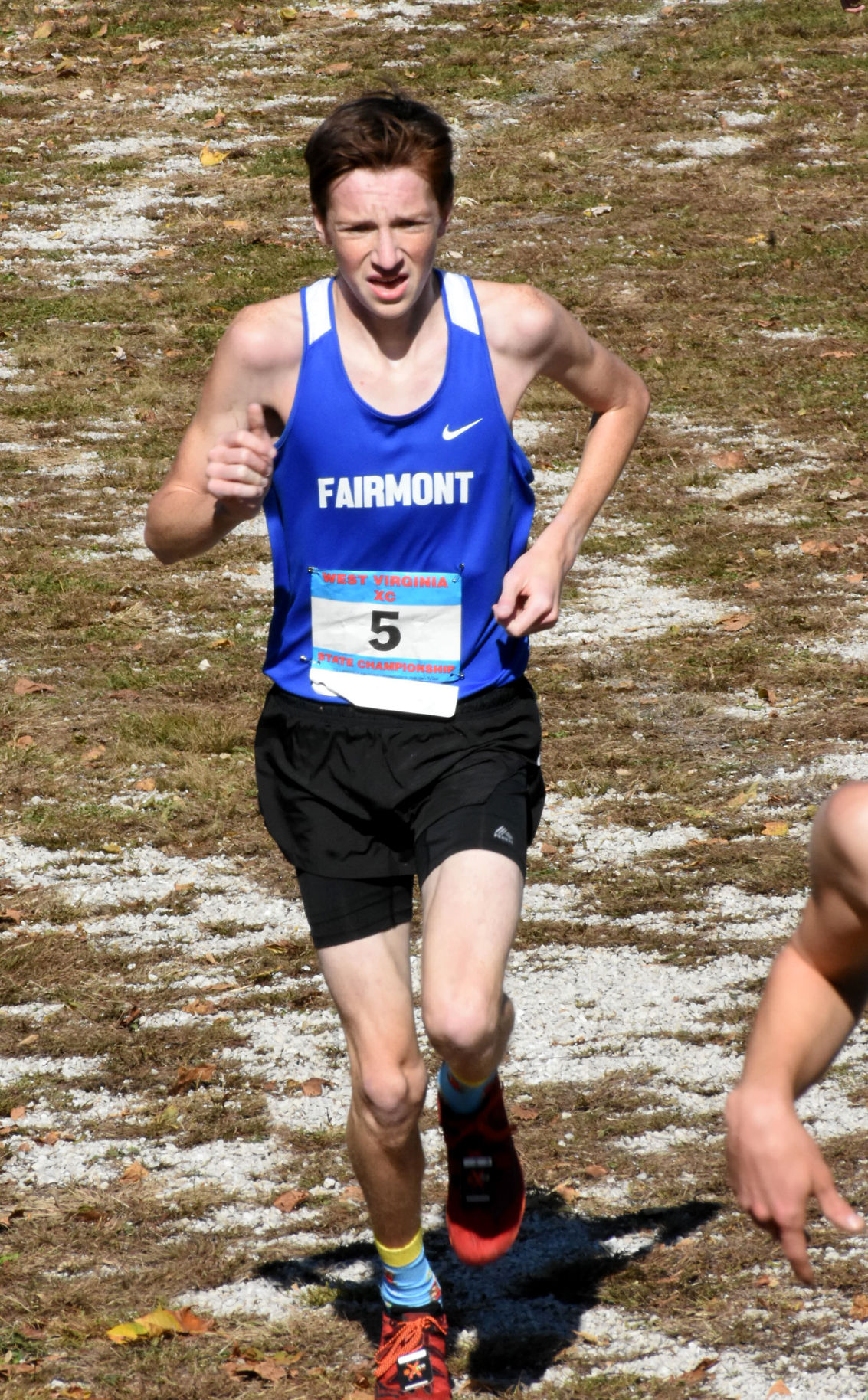 FAIRMONT — Two years ago, they edged Winfield in the ultimate nail-biter for their first championship of the current era. Last year, they defeated Bridgeport in a battle of record-setting titans for a repeat title. Heading into this season, as they eye the state’s sixth ever three-peat in boys’ cross country, the most formidable foe is probably Frankfort.

Over the past few seasons, Fairmont Senior High’s cross country team has overcome rivals and held off adversaries time and again for landmark victories and historic titles, but as the Polar Bears have ascended from Class AA state runners-up in 2017 to its pursuit of a third-consecutive Class AA state championship this fall, their biggest challenger has always stayed the same: Themselves.

“We’re always trying to beat ourselves. I think we’re more motivated to beat each other and beat our past selves than we are necessarily the competition,” said FSHS head coach Dayton McVicker, whose Polar Bears are going for the state’s first three-peat regardless of class since Ravenswood won nine straight Class AA/A championships from 2000-08. “We’re already kind of putting the pieces together where we think we can be better again this year.”

On first assessment, the idea — as McVicker’s and FSHS’s runners’ aspirations almost do — that the Polar Bears’ can strive even higher sounds ludicrous, brash at best and delusional at worst. The program is coming off back-to-back state titles. Last year’s team set the Class AA state meet record for the fastest ever finish (a time of 16:55 per runner). They’ve lost the Class AA/A individual state champion Ethan Kincell to graduation as well as Alex Morris, their No. 5 runner from last season.

Yet, scan the roster, check this summer’s workout times, start comparing all the numbers, and it, somehow, does start to seem plausible.

“I like it whenever people think about us losing seniors because we still have a lot of guys out here who are healthy and strong,” said rising senior Tyler Hayes. “I really don’t think much has changed. Honestly, I think we’ve gotten better.”

Hayes and fellow rising senior Logan Zuchelli are the team’s two pillars, the strongholds who have legitimized the goals to level up yet again. Both are coming off all-state performances at last year’s state meet where Zuchelli impressed finishing 4th overall and Hayes, even in what he’s quick to deem a disappointing race for him, finished 8th overall. Both runners — whose trajectories have interestingly unfolded almost in sync on a broad scale — enter the season with legitimate aspirations to be the Class AA/A individual state champion. When taking into account graduations and Bridgeport’s jump to Class AAA, only Doddridge County’s Carter Lipscomb finished ahead of Zuchelli among returning runners at the 2019 state meet, while Lipscomb, Zuchelli and Frankfort’s Garrett Ferguson were the only returnees to best Hayes.

“I ended the season a lot better than I expected, and from there, I realized I’d come into this season ranked pretty high and have a shot to contend for the individual title,” Zuchelli said, “so right away after states, I just started training for the next year.”

“I pretty much kind of had the opposite effect there. I got on the podium, but that wasn’t my goal last year, I wanted to be Top 5,” Hayes said. “Getting eighth place really left a bad taste in my mouth and that’s all I’ve been thinking about since it happened.”

Throughout first individual training and now the past three-plus weeks of team training, Hayes has been on a rampage. He blitzed to a time of 15:50 in the team’s 5K time trial on the track last Friday, according to McVicker, a mark on par with Lipsocmb’s lifetime personal best.

Zuchelli was right around his time at last year’s state meet (16:26.39) in the track time trial last Friday, although he admitted he had hit a bit of a wall not long beforehand during the final weeks of individual training.

“I was struggling there running on my own,” Zuchelli said. “Everybody was running by themselves,” McVicker said, “so everyone had to be really individualistic with their training and individually motivated, which they were, but it started to take a toll on them. I’m so happy we got to start practicing when we did because everybody seemed to be splitting at the seams a little bit.”

Hayes and Zuchelli are the team’s rocks all the way around as grizzled, accomplished veterans and unquestioned team leaders, but the Polar Bears’ outlook stems from a roster-wide phenomenon of better times and maniacal training, McVicker said. Currently, five of Fairmont Senior’s seven runners are logging over 55 miles per week, McVicker said, more than any runner ever has for a consistent basis in his training program. And the team’s top three runners in Hayes, Zuchelli and rising junior Jasper Brown, who finished 16th overall at state last season, have been exceeding 60 miles a week for the past 12 weeks. The mileage is borderline re-calibrating McVicker’s training regimen.

“We’re doing the same workouts we always do, it’s just everybody is doing them quicker,” McVicker said. “It’s really just a matter of them getting fitter and running them faster.

“That’s just a testament to these guys — they’re so motivated.”

The progression from the full roster of Hayes, Zuchelli, Brown, rising senior Elijah Hannig and the trio of rising sophomores Devon Lemon, Griffin Thomas and Tyler Morris has pushed the team’s sights beyond simply the program’s first ever three-peat. They’re even looking past their state meet record mark of a 16:55 team average they set last season. This season, according to McVicker, the goal is to register a time in the state’s all-time Top 10 since the state meet has been at Cabell Midland High. Last season’s team average of 16:55 was 18th in Cabell Midland state meet history among all three classes. The 10th-best time ever is 16:40, McVicker said.

“Pretty much as soon as we won it last year, we were ready to three-peat,” Hayes said. “That’s at the top of our list, but it’s not just that, it’s becoming better as a team average.

“We want this to be the best team we’ve ever had.”

Hayes, Zuchelli and Brown are vying to top the combined 1-4-8 finish of the team’s Top 3 last season following an offseason in which Brown has really discovered a high end consistency, McVicker said, and the team’s fourth and fifth spots — looking potentially shaky based off last season’s results — have been sured up. Hannig is back to the best version of himself, McVicker said, after he fought through sickness toward the latter half of last season (he was about neck and neck with Brown’s times beforehand), and the sophomore trio has really come on, especially Lemon.

“I’m pretty sure he was our slowest runner in every race last year — he never broke 20 minutes,” said McVicker of Lemon. “He busted his butt so hard this winter.” In the 5K track trial last week, Lemon clocked an 18:14, almost two full minutes better than the 20:10 mark he posted last season.

“They know what is expected out of them. We don’t have to tell them,” Hayes said of the team’s depth guys. “And...they want to be good.”

“I’m pretty sure the newer guys kind of know that. They know that what we’ve done is something they’re going to have to do — they have to keep working, keep running during the offseason,” Zuchelli said.