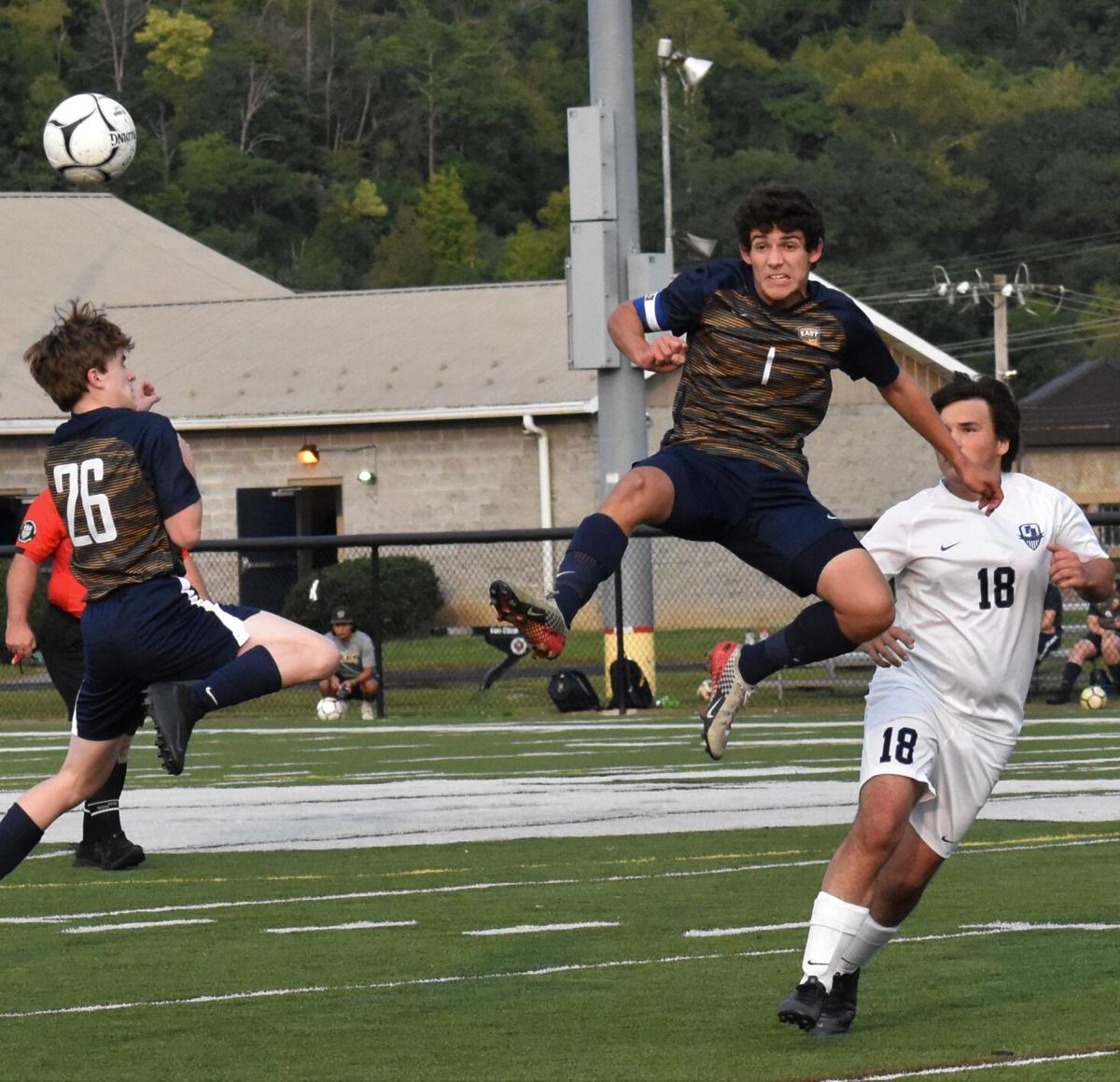 East Fairmont's Lance Cerullo (1) plays a ball out of the air in front of Fairmont Senior's Gage Carlson (18). 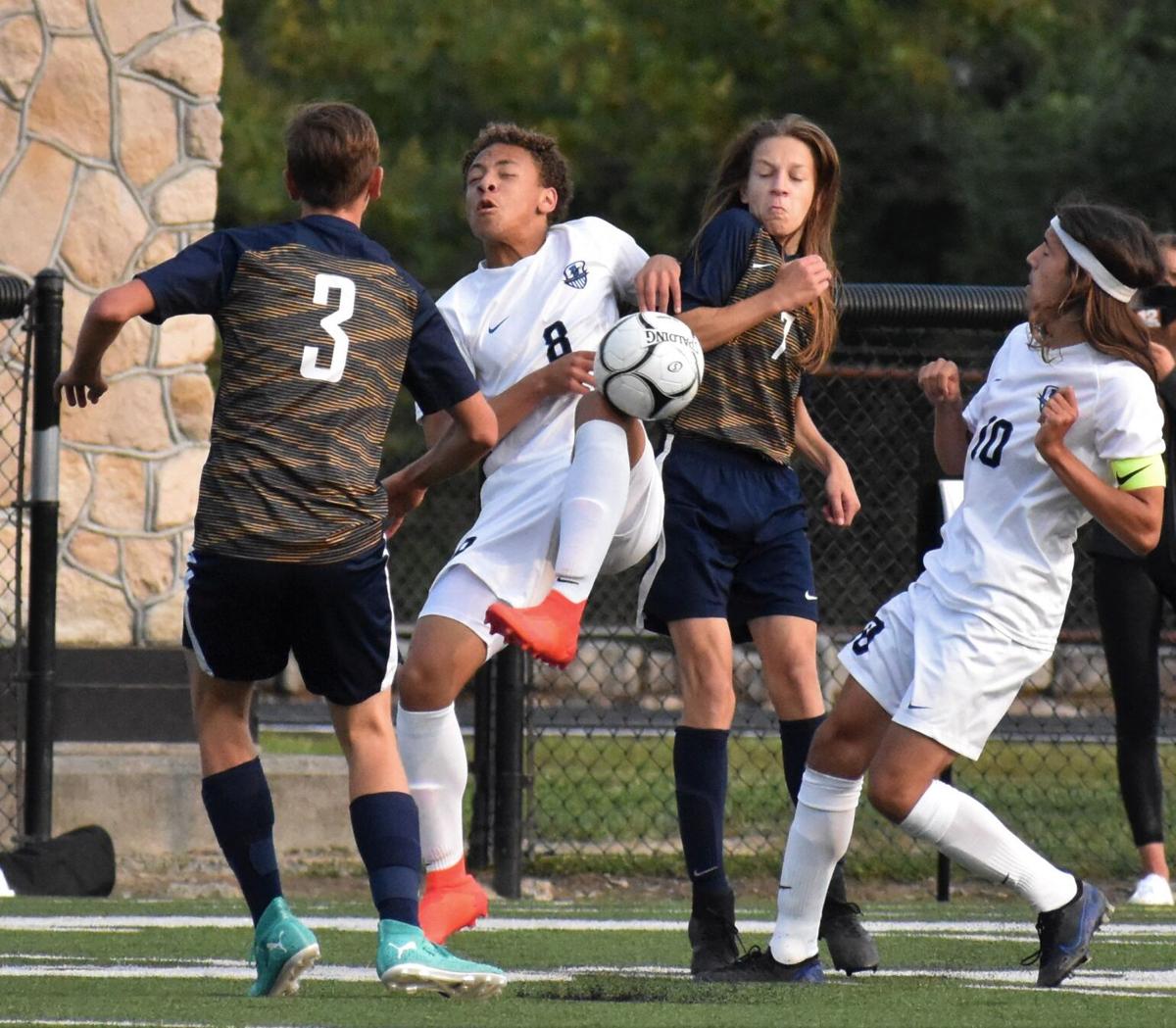 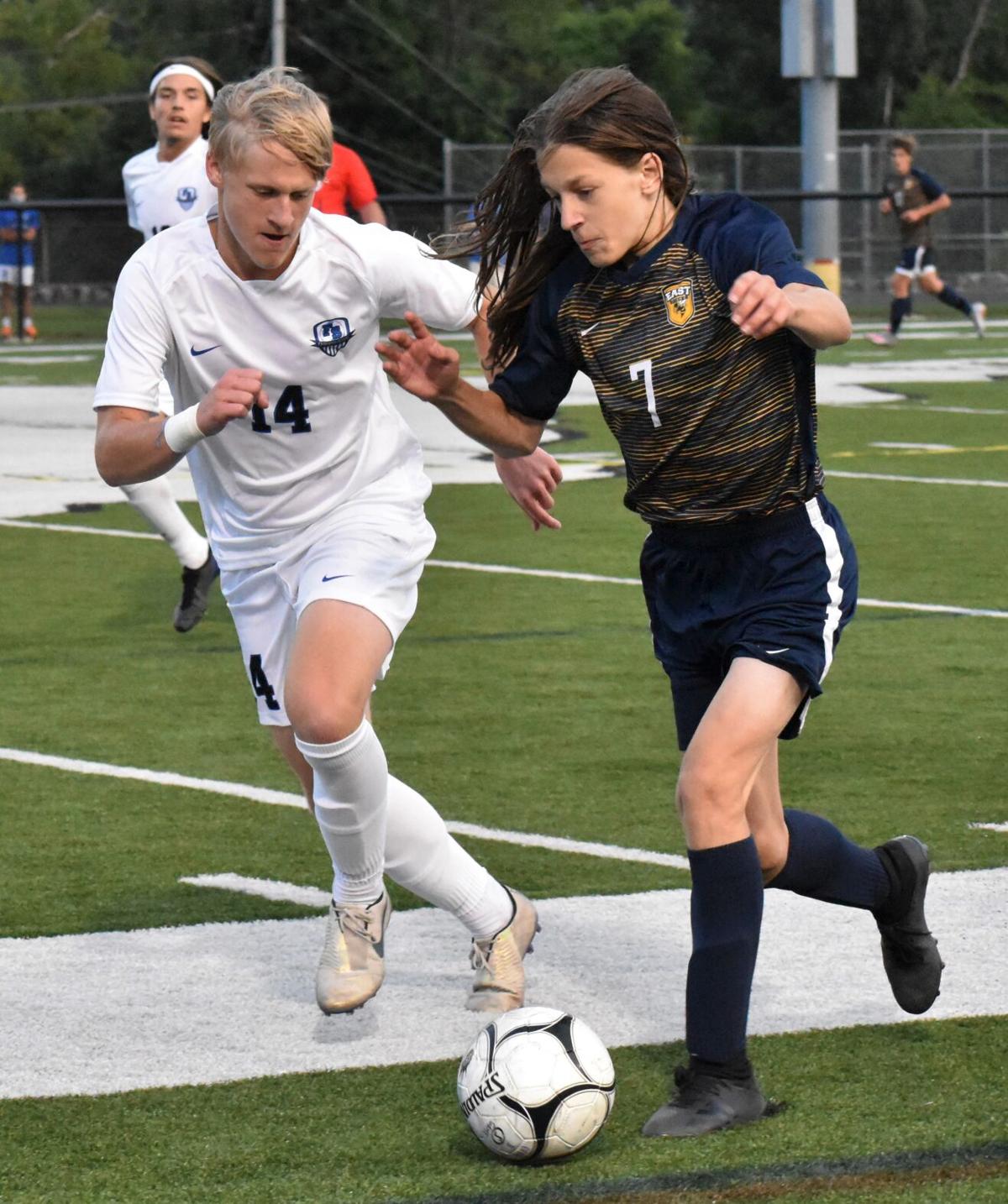 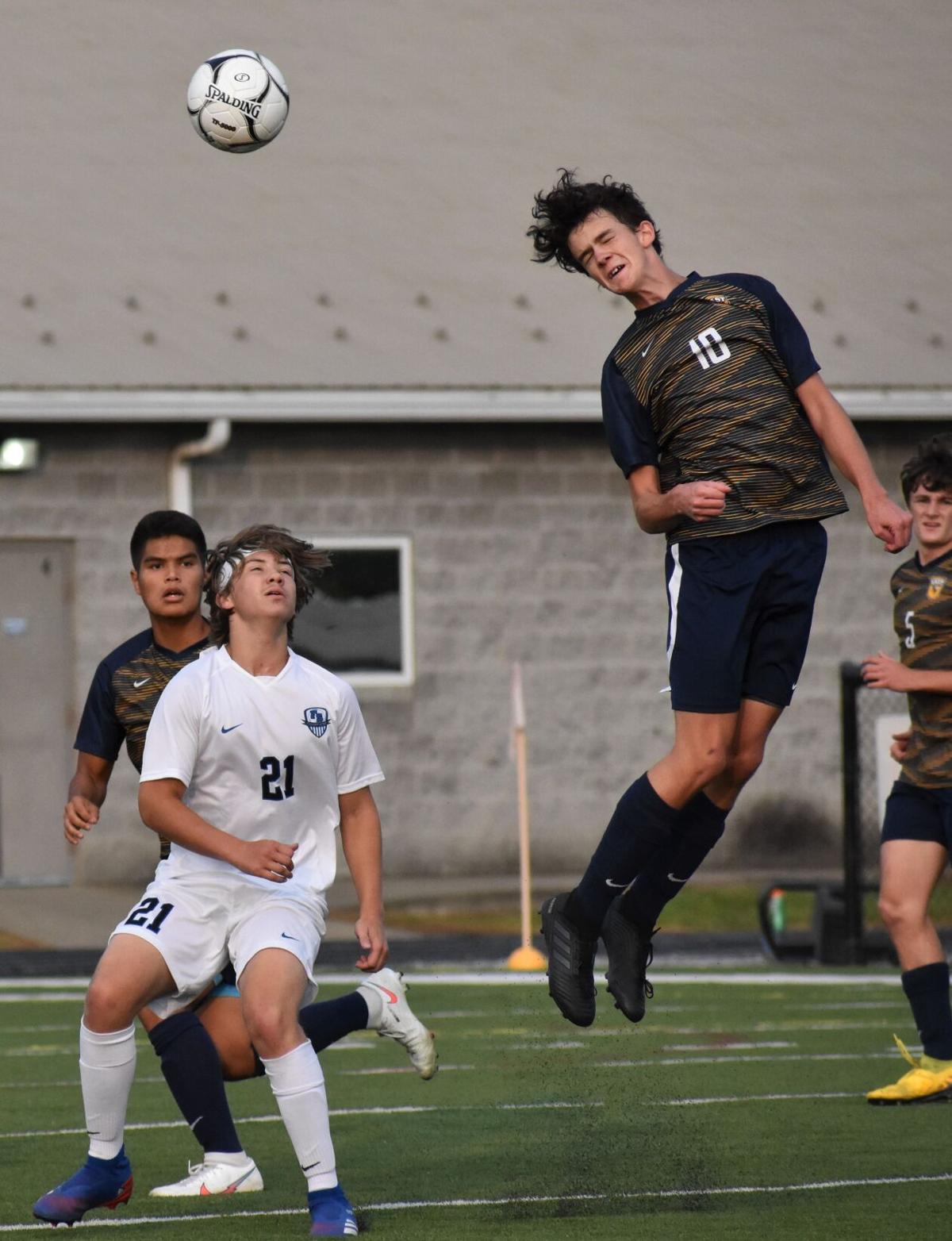 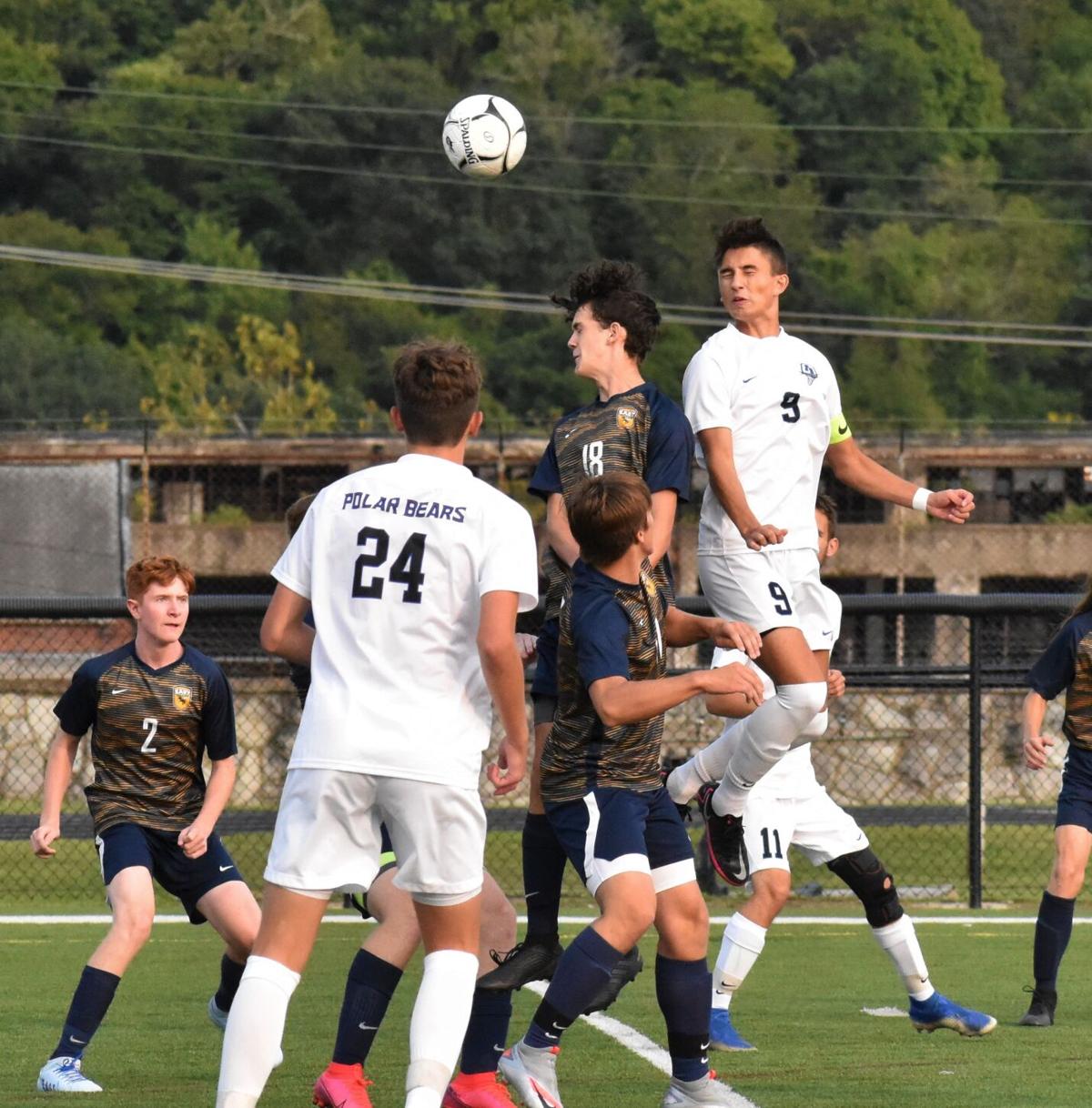 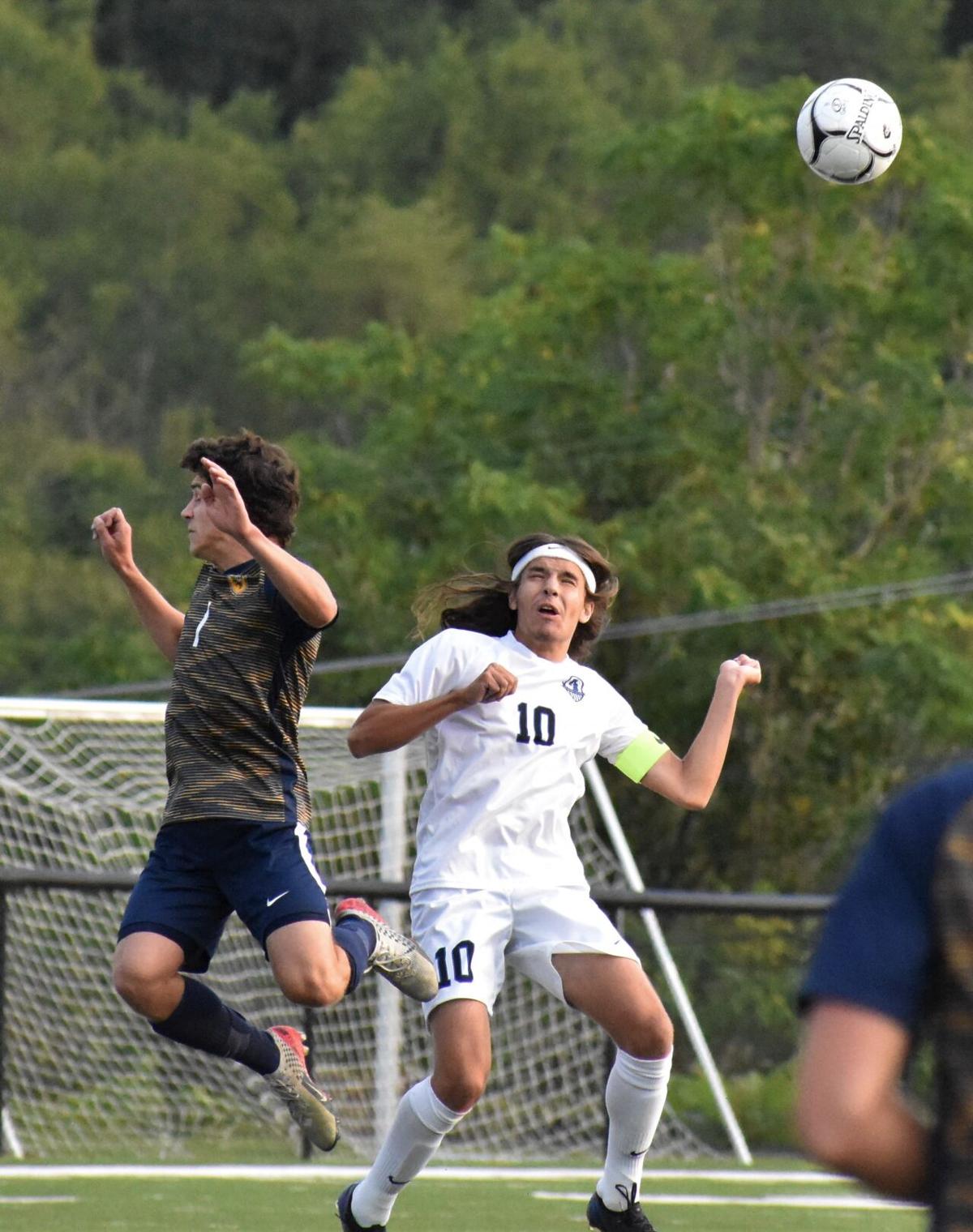 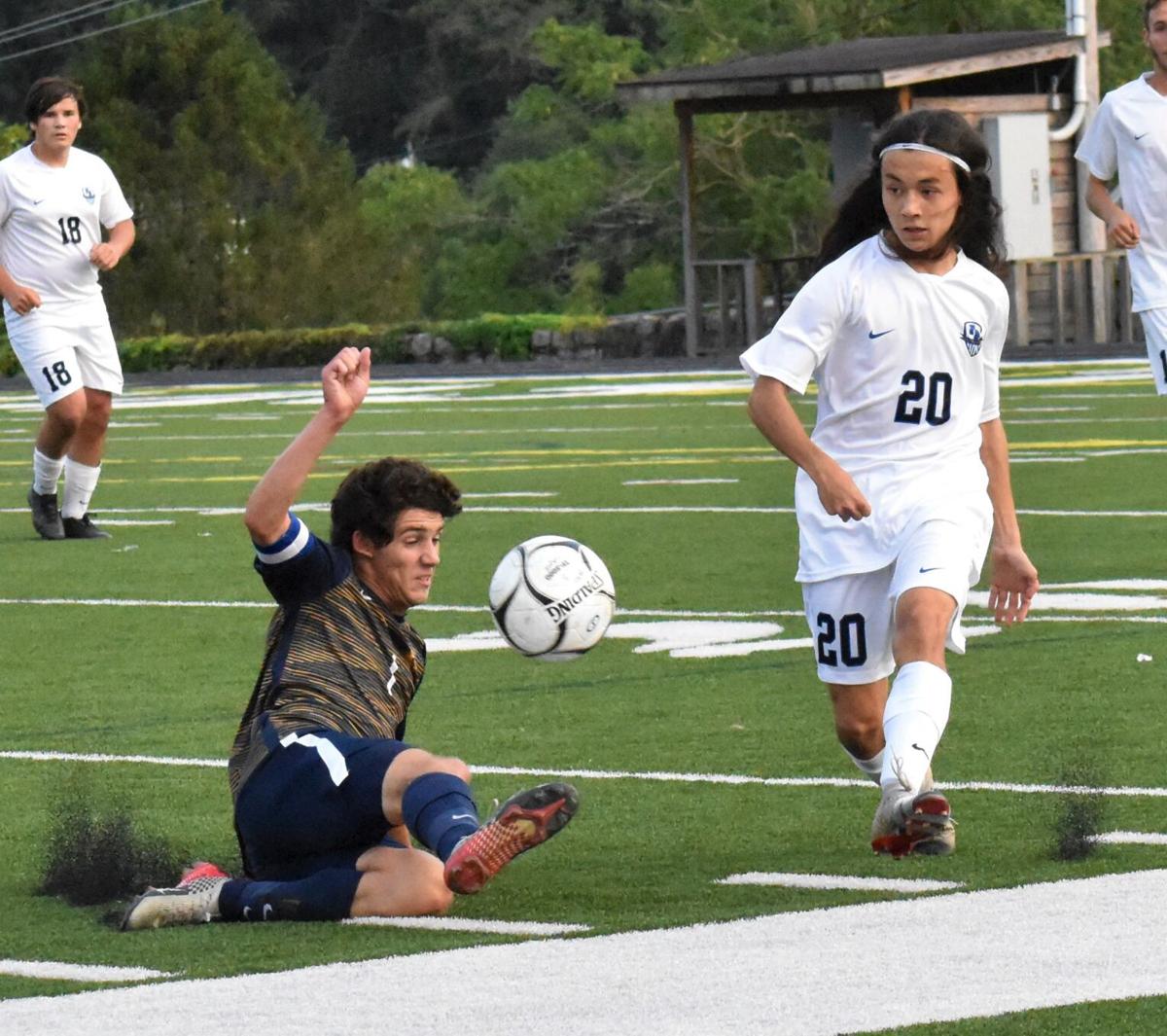 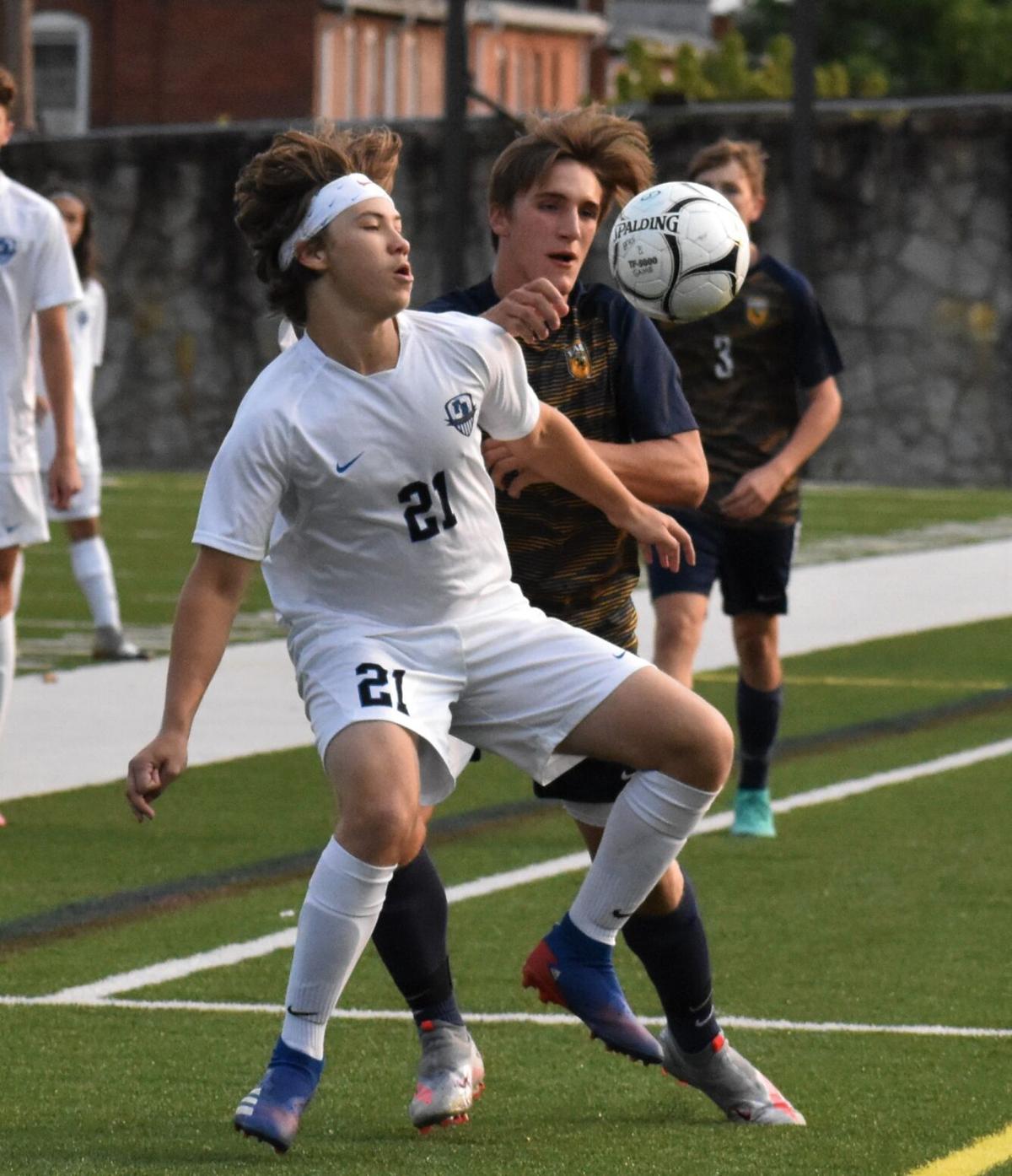 East Fairmont's Lance Cerullo (1) plays a ball out of the air in front of Fairmont Senior's Gage Carlson (18).

FAIRMONT — A crosstown rivalry, one full of history and stoked in recent years by a run of classic games, hit the field again for its latest installment on Tuesday as East vs. West took center-stage in the Friendly City at East-West Stadium.

Fairmont Senior, however, upended the drama of this year's regular season meeting with East Fairmont, as the Polar Bears made good on their status as favorites without many hiccups and took it to the Bees for a 6-2 victory.

"Honestly, we were trying to rebound from a tough Saturday," said Fairmont Senior coach Darrin Paul, whose Polar Bears (5-1) were handed a 4-1 loss on the road to Scott over the weekend. "We didn't play well Saturday and missing Isaac (Branch) in the back we've been struggling defensively to kind of get our game on."

"This was a huge comeback game for us," echoed star FSHS senior midfielder Jonas Branch, "because we played really bad against Scott -- we didn't have Isaac of course and we faced adversity that game. So (today) we had to come out and we had to come out strong."

While Branch, fellow star Bubby Towns, burgeoning sophomore talents Nate Flower and Kaelen Armstrong, and the Polar Bears' endless array of energetic sidekicks in Ashton Cecil, Ro Jones and Denzel Duvert eventually got the team's offense rolling on Tuesday, it was the team's defensive structure that entered the matchup under the microscope. Without their all-state star and natural leader in Isaac Branch and with East Fairmont all-state scoring dynamo Lance Cerullo on the prowl, the FSHS backline was treading on shaky ground.

Carlson took up Branch's usual starting spot at center back in FSHS's backline unit alongside Cale Beatty, Carson Mundell and Isaac Yoneda and absolutely proved his merit with a tremendous showing, according to Paul.

"Gage played phenomenal. I started him Saturday at outside back, but I moved him to his natural position (today) at center back, which he plays for the JV team, and I thought he played outstanding," Paul said. "He marked up when he needed to mark up, he cleared when he needed to clear, and he played to feet.

"He was the best player on our team tonight."

"I was just trying to do my part on the team and trying to make a name for myself out on the field," Carlson said. "(As a unit) we kept talking the whole time, shifted when we needed to, and stayed together with a tight bond."

Carlson and the Fairmont Senior defense blanked East Fairmont (3-2) on the scoreboard in the first half — at which point the Polar Bears led 3-0 — and held the Bees to just five total shots for the game. The unit man-marked Cerullo all over the field and kept the rest of the Bees' attacks under wraps.

"We didn't play according to our game plan, which is why I was disappointed," East Fairmont coach Jeff Merrifield said. "The game plan is not to just kick the ball to Lance and have Lance do all the work; you can't do that, nobody can do that. As we approached this game, we talked about how we're going to pay for it if we try to play that game against teams that are better organized and have quality players, and today we paid for it."

The Polar Bears burst out to the aforementioned 3-0 lead by halftime after they overcame a slowish start to plant three goals on the Bees in the final 16 minutes of the first half.

Flower, who had a pair of goals for Fairmont Senior, opened the scoring in the 24th minute when he carried his dribble deep down the left flank along the end line before turning the corner and overpowering a tip save attempt by East Fairmont goalkeeper Nick Myers. Thirteen minutes later, FSHS doubled its lead when Branch launched a pinpoint chip pass across the field to Duvert on a run down the right sideline, which Duvert gathered before dodging an EFHS defender and slipping a shot just inside the near post for the goal.

"I think we have a couple of guys who are coming into their own," Paul said. "Nate in the past three games has definitely been coming on — he's taking a big leadership role and wants to be a goal scorer. Then Denzel, he had a beautiful goal — I tell them (Duvert, Cecil, etc.) if they give us the runs, (Branch and Towns) are going to find them and all they have to do is finish and Denzel did that today; that was a gorgeous goal."

But it was moments after Duvert's goal in the 39th minute when Fairmont Senior delivered the dagger. With just a minute until half and the Bees still within shouting distance despite the two late-half goals, the Polar Bears drew a foul just outside the 18-yard box to set up a free kick chance. Towns and Branch worked their pre-designed, pre-shot criss-cross fake on the set piece before Branch fired a direct shot that banged off the inside of the far post and into the net for a 3-0 lead.

East Fairmont finally got on the board in the 50th minute when it played a cross pass into the top of the 18-yard box to senior Luke Hawranick for a one-touch control and shot sequence. But the Polar Bears pushed the margin back to three scores in the 65th minute on Flower's second goal, and then Towns made up for an off-shooting first half in his book with a pair of late goals to make it 6-1.

"(We were underdogs), but not 6-2 or whatever the score was underdogs. So I'm a little disappointed I'm not gonna lie," Merrifield said. "I thought we should've fought harder and I think we could've played much better than we did today to at least make it competitive. By the end of the game, (Fairmont Senior) was just having fun."

East Fairmont's Ashton Cole scored the game's final goal on a header off a corner kick.