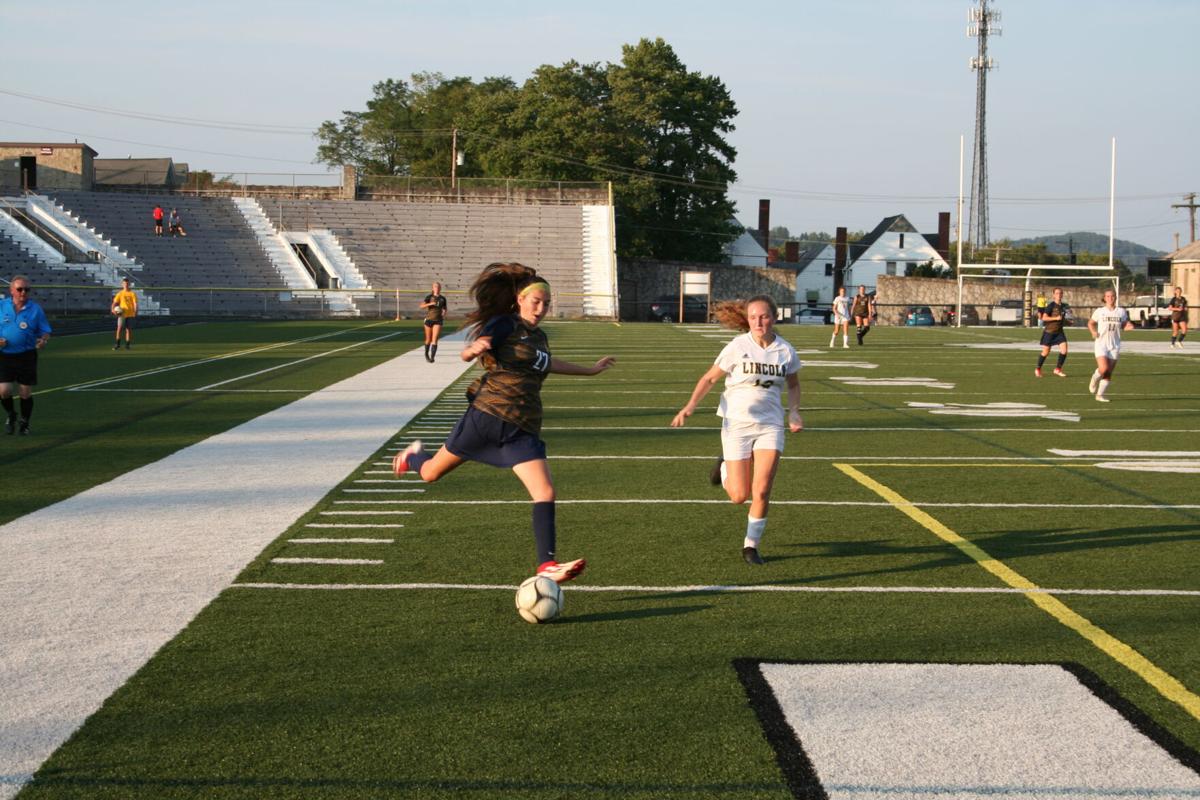 Ally Comas prepares to send a pass over the middle of the field against Lincoln High School at East-West Stadium. 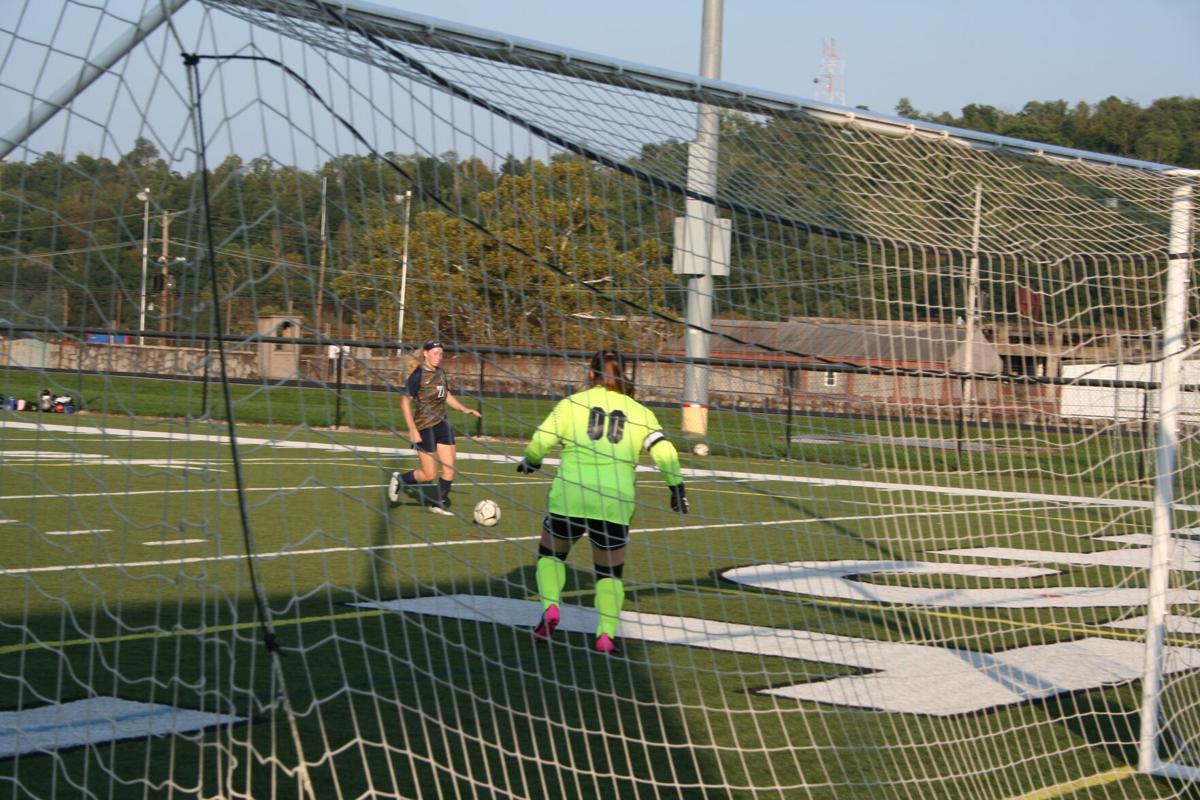 Kierstyn Maxey winds up for a shot against Lincoln High School at East-West Stadium. 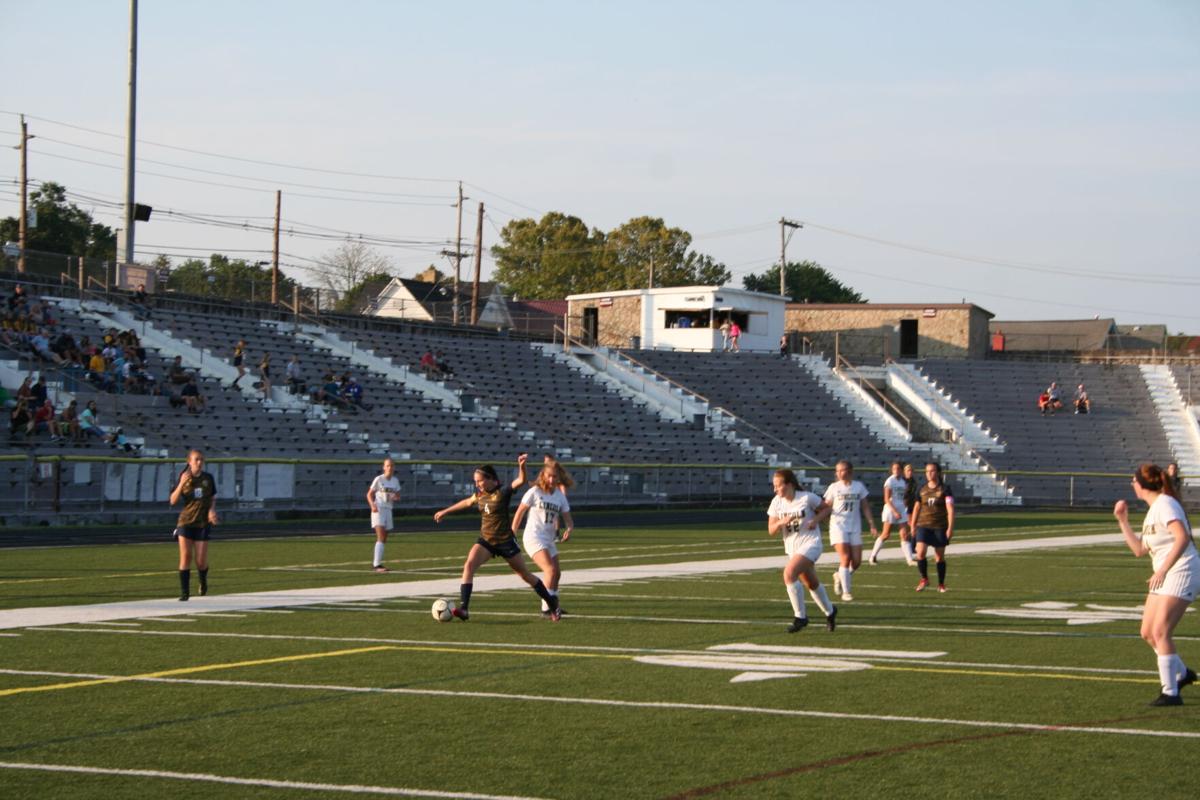 Ally Comas prepares to send a pass over the middle of the field against Lincoln High School at East-West Stadium.

Kierstyn Maxey winds up for a shot against Lincoln High School at East-West Stadium.

FAIRMONT — With seven of their first eight games taking place at East-West Stadium, the East Fairmont faithful have grown accustomed to seeing their Bees win in person.

So far in this 2021 season, Eric Wright’s squad has been, in the best sense of the word, predictable.

The Bees (7-0-1) secured their fifth shutout victory of the year, 4-to-0, on Tuesday night against the Lincoln Cougars (2-4-1) behind a varied offensive attack that saw three different Bees score a goal.

East Fairmont peppered the Cougars with shots on goal from the opening minutes onward, but didn’t cash in properly until the 22 minute mark of the first half, when Maddie Lott capitalized on a ball that hung in the air for a long while, uninterrupted by any defenders, after a deflection on a prior attempt.

Even when the Bees didn’t successfully convert, it still looked impressive. Just before her goal, Lott and Kierstyn Maxey played the give-and-go game past several Cougar defenders, passing back-and-forth on the run several times to excite the home crowd, but could not get the ball past Lincoln goalkeeper Delaney Haller.

After the first goal however, the lid came off, and after an attempt from Alley Comas on a tight angle hit off the post, Leah Paugh had an easy clean-up to give the Bees a 2-to-0 lead not even a minute after their first goal.

East kept the ball on Lincoln’s side for virtually all of the first half, with the Cougars not getting a legitimate shot at offense until under two minutes left in the half.

The Bees came on strong for two more goals in the second half, both from Kierstyn Maxey. Maxey thumped one through the posts at the 26 minute mark off an assist from Makayla Comas, who narrowly managed to tap the ball away from Haller after the goalie had deflected Comas’ own shot attempt. Maxey did it all herself for her second goal, getting a running start from 10 yards out to fire in a score with just under 20 minutes left to play.

By the time the dust settled, Lincoln had only one shot on goal, a late attempt that was waved off after it was ruled the Cougars had kicked the ball in while the goalie was handling it.

After yet another strong performance, the question has to be asked of how long the Bees will keep up their dominance.

East has not slipped up yet, with a 1-to-1 tie against rival Fairmont Senior being their only blemish against a true perfect season to this point. The Bees responded to their only non-victory by winning 15-to-2 against Lewis County the following game.

While they’ve had good seasons before in recent memory, and went deep in the playoffs last year before being knocked out by those same Fairmont Senior Polar Bears the Bees look even better this year.

“We’ve really worked on consistency this year, I think as a team we’re talking, communicating more than last year or the year before last,” Lott said.

East has steadily improved from where they stood in those past two seasons to where they are now. The Bees went 14-7-1 last year, and 6-7-7 in 2019. Both sides of the ball have been impressive, and the numbers back that up — 31 goals over their first eight games, while allowing only five goals against them in that same time.

Lott may be up front piling up points with the Bees offense, but she recognizes the strides the defense has made to neutralize opponents like they have all season.

Communication between teammates has worked wonders on both sides of the pitch, but on an individual level soccer is filled with minutiae, both physically and mentally, and with 11 games left in the regular season, head coach Eric Wright wants to drill in those fine points.

After as good a start as the Bees have had, their toughest opponent right now might be complacency. After early success, plenty of teams have gotten lackadaisical down the stretch. From their comments after Tuesday, one might get the impression East Fairmont knows that. The Bees have put high expectations upon themselves from the onset of the season, and sound like they’re intent on seeing them through.

“[Expectations] are the same,” Wright said. “We’ve been playing really well. Still undefeated, and right now — just like the old cliché, ‘take it one game at a time.’ But the expectations for us haven’t changed all season.”