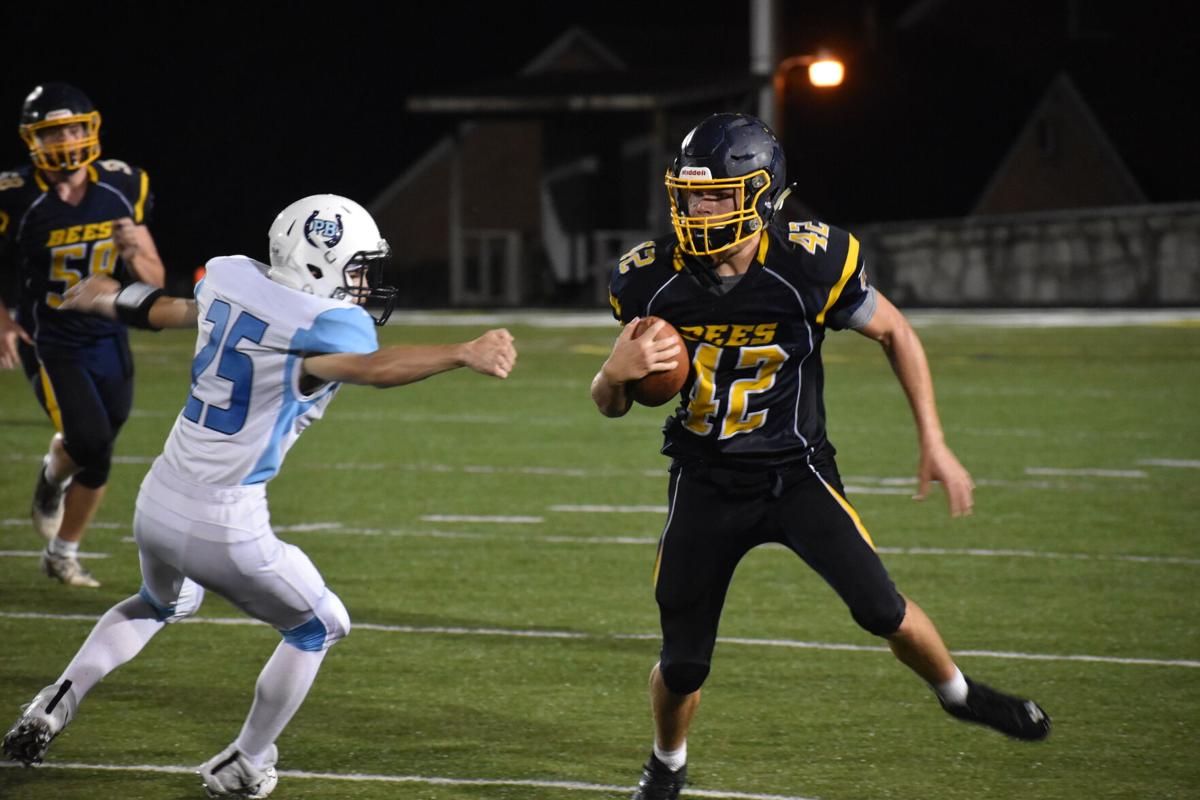 East Fairmont’s Will Sarsfield runs around a Phillip Barbour defender at East-West Stadium. 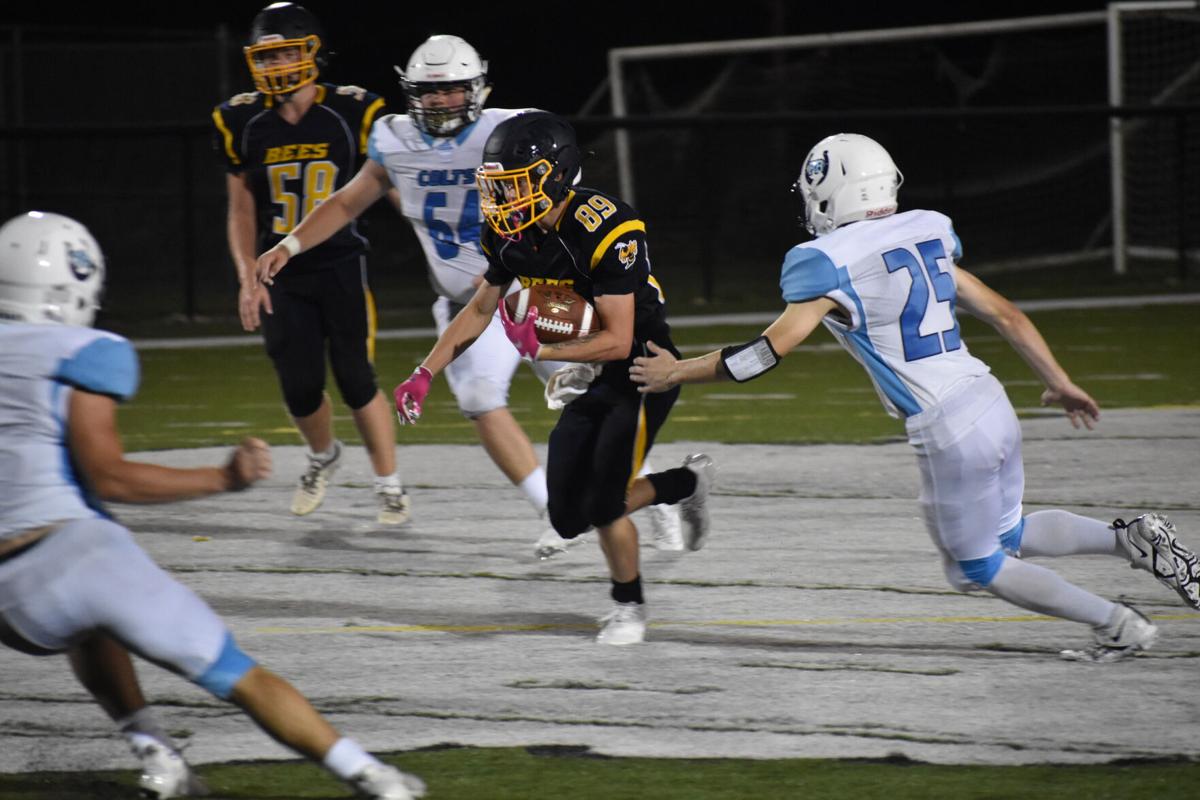 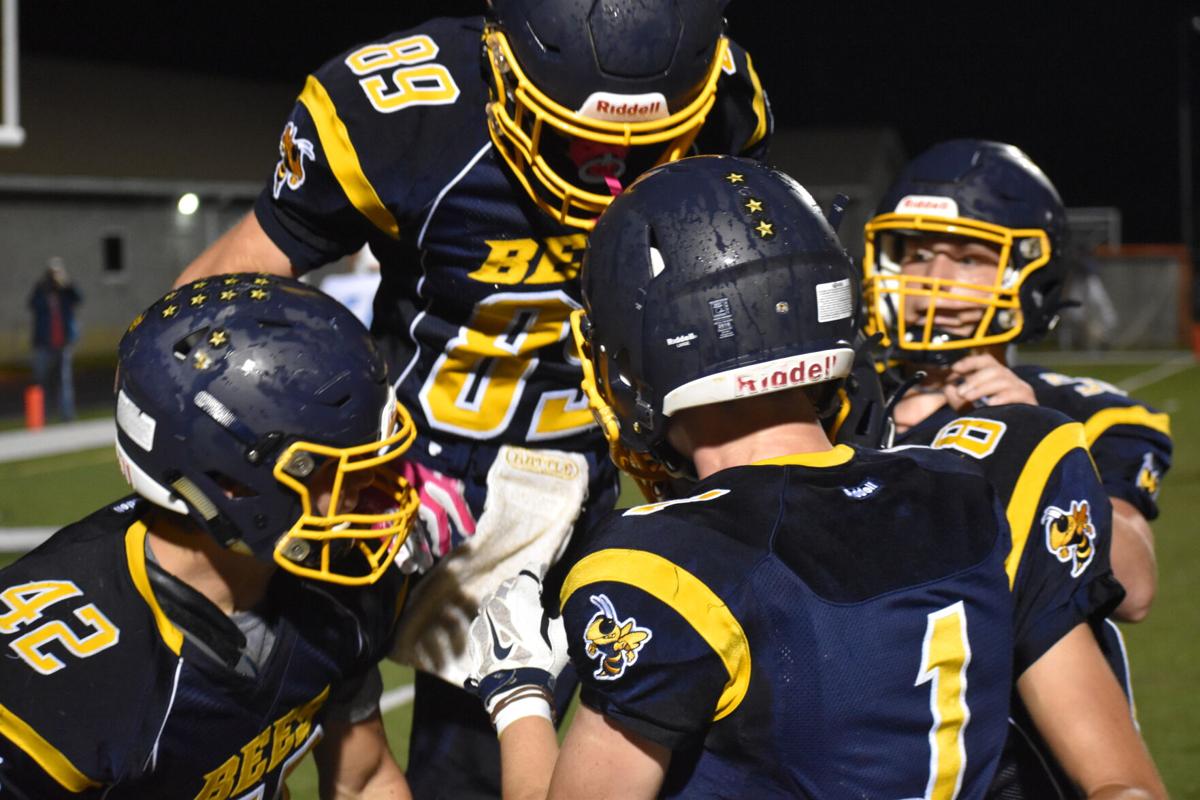 The East Fairmont Bees celebrate a Hoyt Michael touchdown during their game against the Phillip Barbour Colts. 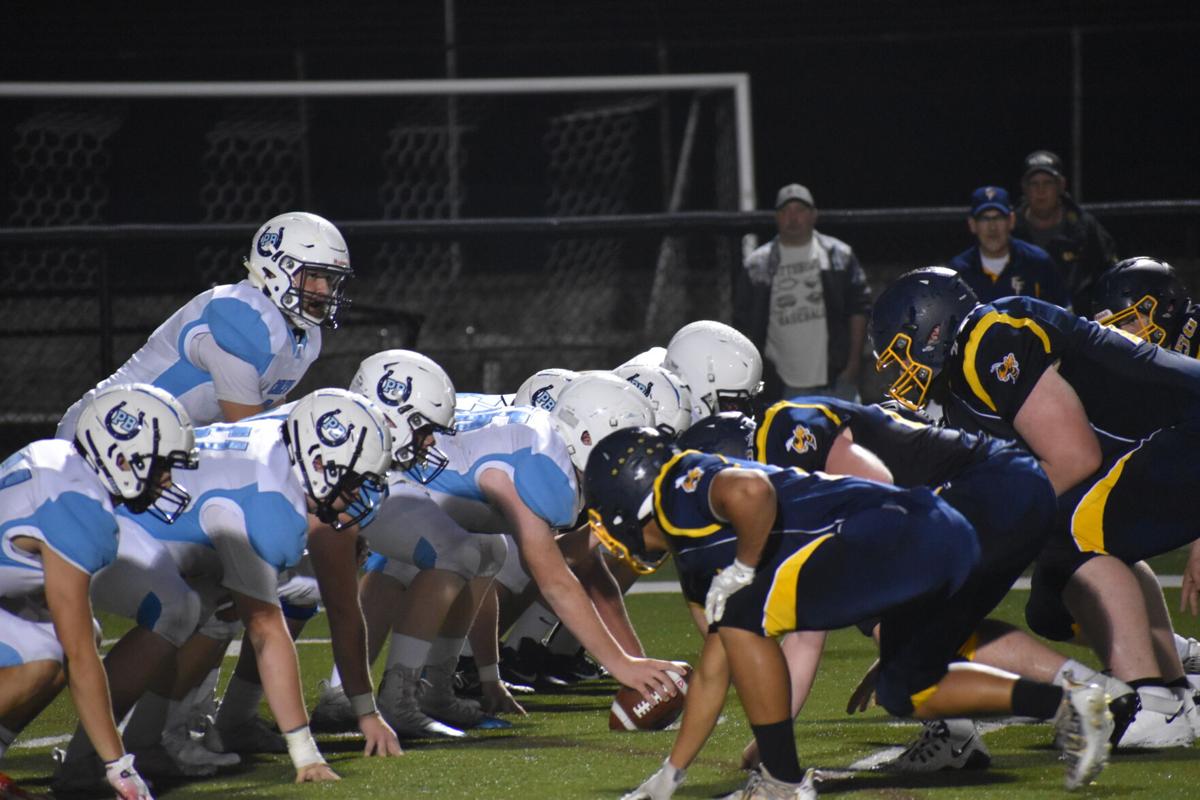 The East Fairmont Bees line up on defense against the Phillip Barbour Colts at East-West Stadium. 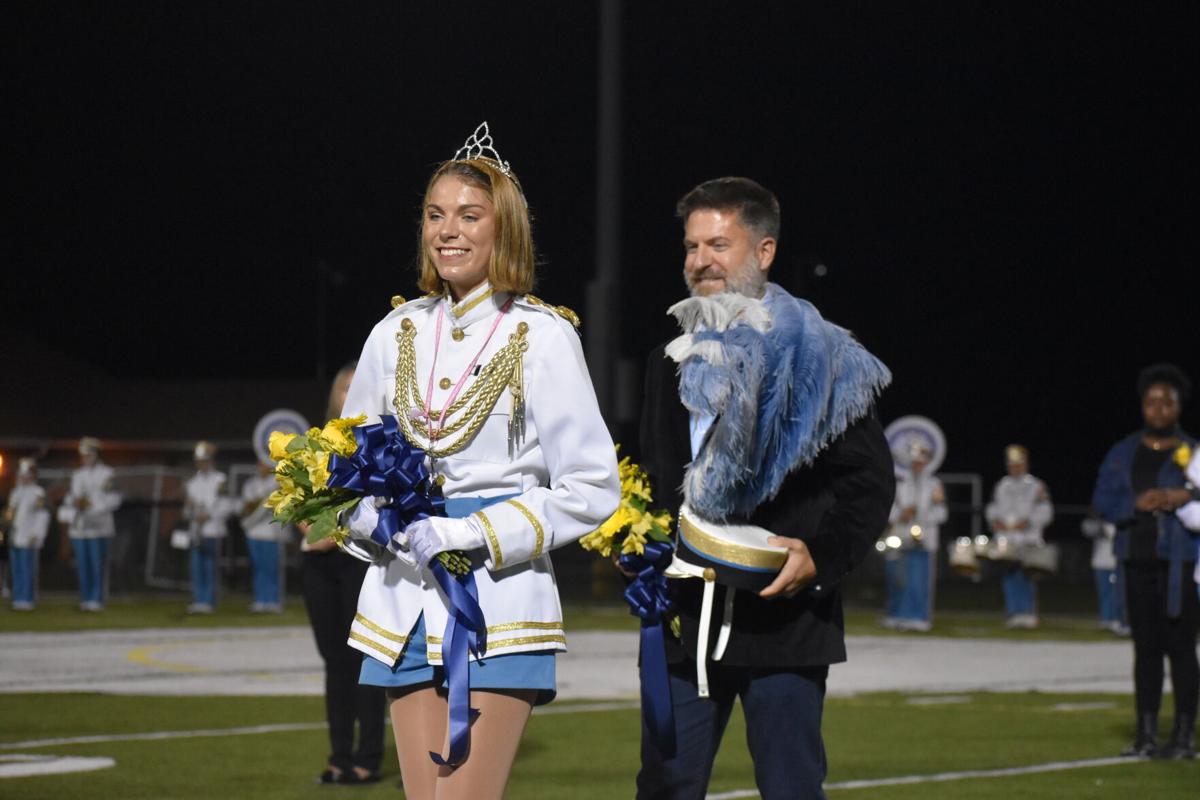 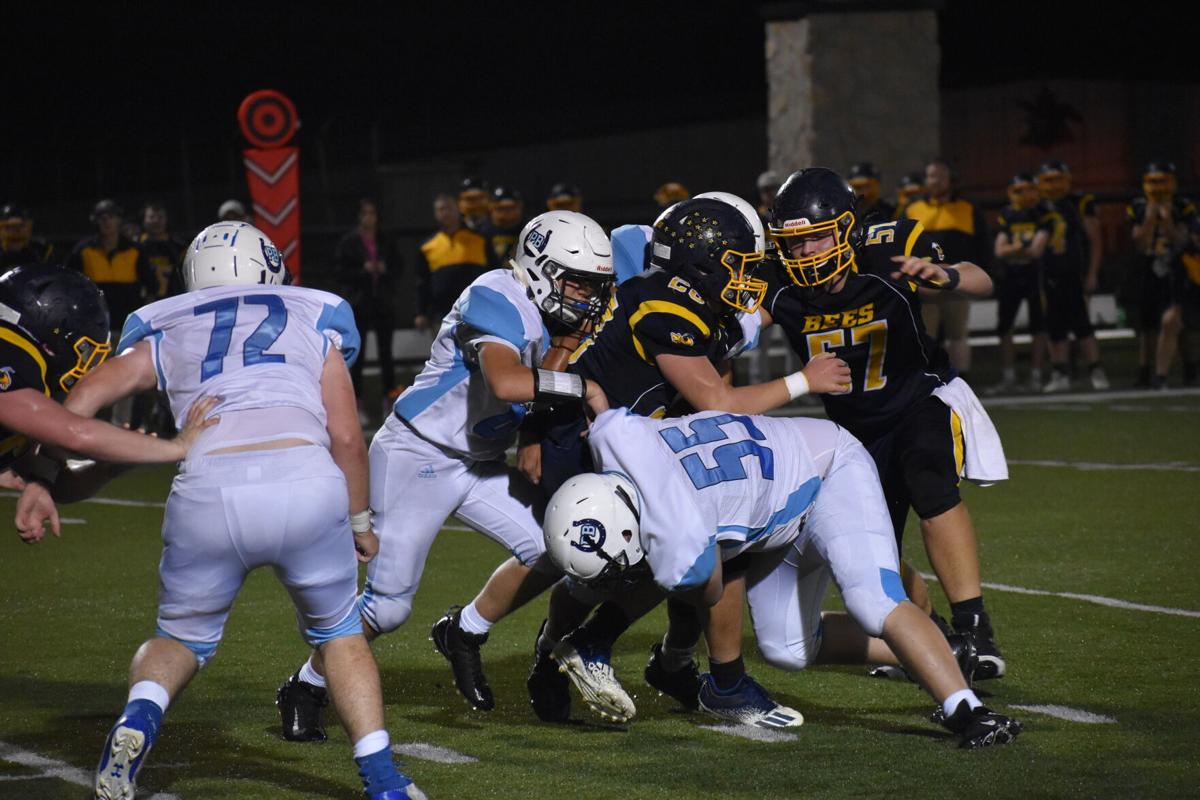 A pack of Phillip Barbour defenders hang onto East Fairmont's Seth Watkins during a run. 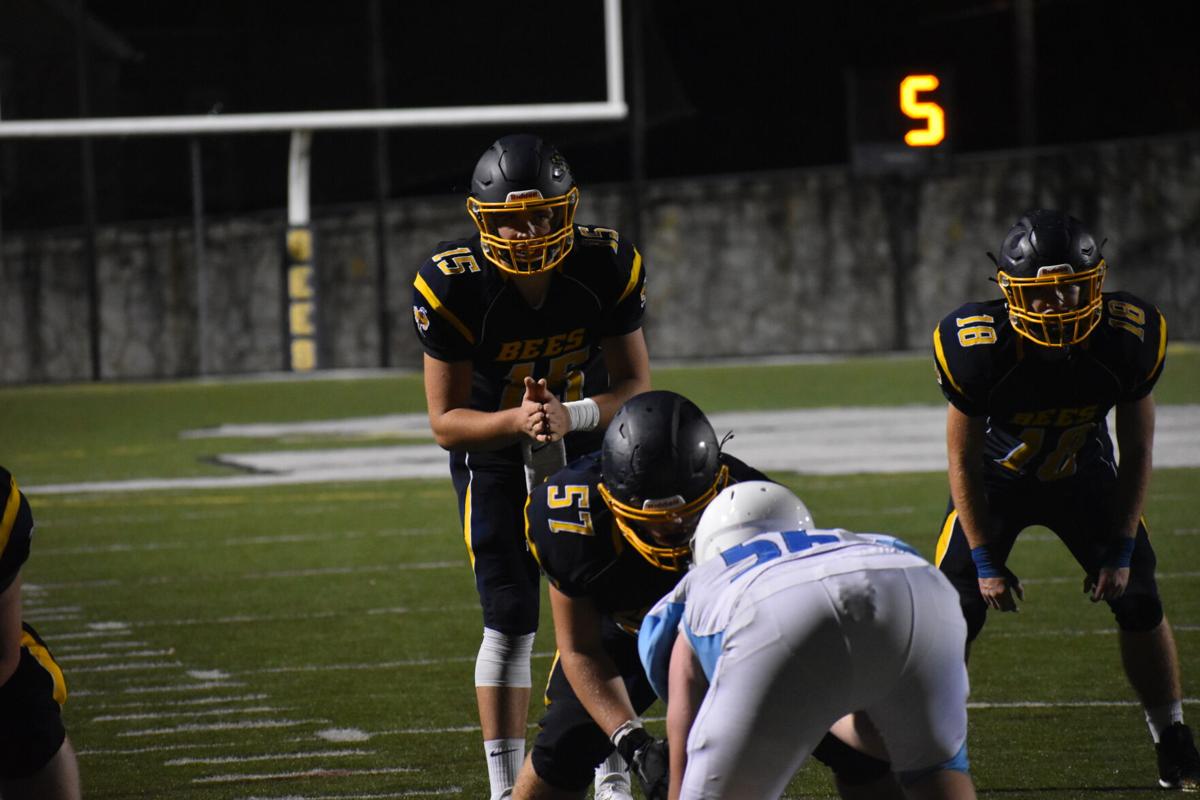 East Fairmont's Ian Crookshanks goes through his cadence before a snap against Phillip Barbour.

East Fairmont’s Will Sarsfield runs around a Phillip Barbour defender at East-West Stadium.

The East Fairmont Bees celebrate a Hoyt Michael touchdown during their game against the Phillip Barbour Colts.

The East Fairmont Bees line up on defense against the Phillip Barbour Colts at East-West Stadium.

A pack of Phillip Barbour defenders hang onto East Fairmont's Seth Watkins during a run.

East Fairmont's Ian Crookshanks goes through his cadence before a snap against Phillip Barbour.

The weather was kind enough, though, to hold back during halftime for the homecoming festivities on the field.

Will Sarsfield was back in the lineup after missing East’s last game against Bridgeport, and made his return felt on both sides of the ball. Sarsfield took the game’s first play from scrimmage for a 62-yard touchdown to put his Bees on the board just 16 seconds into the contest.

“It’s a shot in the arm for us,” East Fairmont head coach Shane Eakle said. “He’s one of our leaders, so I think it just elevates the way we play. It was exciting, and I think our guys responded well tonight.”

Sarsfield finished with 140 rushing yards and two touchdowns on 15.6 yards per carry and a 20-yard reception for his part on offense. Defensively, the senior piled up 12 total tackles, a tackle for loss, and an interception in the second half.

Sarsfield’s two-touchdown game was matched by wide receiver Hoyt Michael. Michael’s first touchdown came off a cross-body throw from a scrambling Ian Crookshanks, who lofted the ball just over the fingertips of a leaping defensive back for a 22-yard score that put the Bees ahead 19-7 at the time.

Michael would score again in the third quarter as Crookshanks found him wide open in the back corner of the end zone from nine yards out. After his second touchdown with six minutes to go in the third, East led 50-7.

The Bees had success through the air and on the ground, with two passing touchdowns and six rushing touchdowns involving seven different players.

On top of Sarsfield and Michael’s explosive performances, Seth Watkins ran in a nine-yard score for East’s second touchdown of the game, Vaughn Frederick ran in a 17-yard TD, Landen Larnerd found pay dirt on a one-yard jet sweep, and Brandon Pisino ran it in from three-yards out in garbage time.

The one constant during all of the action was the offensive line, who were quick to their spots and aggressive at the point of attack throughout the night.

“Our line had a terrific game,” Sarsfield said. “They were able to get a hat on a hat so there was nobody there. That was all on the line.”

“Our offensive line did a nice job up front, give those guys a lot of credit,” Eakle said. “We put a hat on a hat, and made sure that we got some running seams early. They put a lot of guys tight in the box, so once we could get past that first level, we had a chance to make some big plays and give our kids credit, we had several guys that did. Several guys scored touchdowns tonight, a team effort.”

In addition to touchdowns, Friday also featured some place-kicking action, as East’s Jesse Rush put a 42-yarder through the uprights with room to spare with 10 seconds to go in the first half.

On defense, the Bees stuffed eight runs for a loss or no gain, and picked off the Colts twice, once by Sarsfield in the third quarter, and once by Alex Culp in the second. Sarsfield scored on the first play after Culp’s interception, a 24-yard run that was one of his four plays of 20 or more yards Friday.

The longest play of the game, howver, came with 1:24 to go in the fourth, when the game was all but decided. The Bees’ Evan Bartholow fielded a kickoff at the 30, and weaved his way through traffic before ending up in a footrace with the kicker along the sideline, a race which the junior won to score East’s last touchdown of the night.

Bartholow has carved out a bigger role for himself on offense, and finished Friday with two catches for 18 and 19 yards, respectively, to go along with his kick return touchdown.

The Bees mostly stayed away from penalties and played with discipline against Phillip Barbour, but they did let up 15 points in the last three and a half minutes of the game, when both teams’ second-string was on the field.

“We’ve still got to clean stuff up,” Eakle said. “We got a couple breakdowns defensively, obviously it was a nice win for us but we’re going to micromanage and pick out some things that we can get better on. Coming into Monday we’re going to break down film. But overall I was pleased we got to play everybody tonight — that’s another good thing, got a lot of our young kids in the game in the second half.”

The victory tonight was special for East, for a couple of reasons. The team celebrated homecoming after the game and at halftime, where Lainey Barnes was named Homecoming Queen. Friday’s game was also a crucial first step as the Bees enter their second-half stretch of games that will make or break their playoff hopes.

“Tonight was homecoming, it was obviously a little bit different,” Sarsfield said. “It’s a very pivotal point in our season. We’re on the verge of either going the other way or taking off, and I told the guys that if we play a game where we make very few mistakes we’ll prevail, and we did.”

East Fairmont will hit the road next week, travelling to Harrison County to challenge the Liberty Mountaineers.