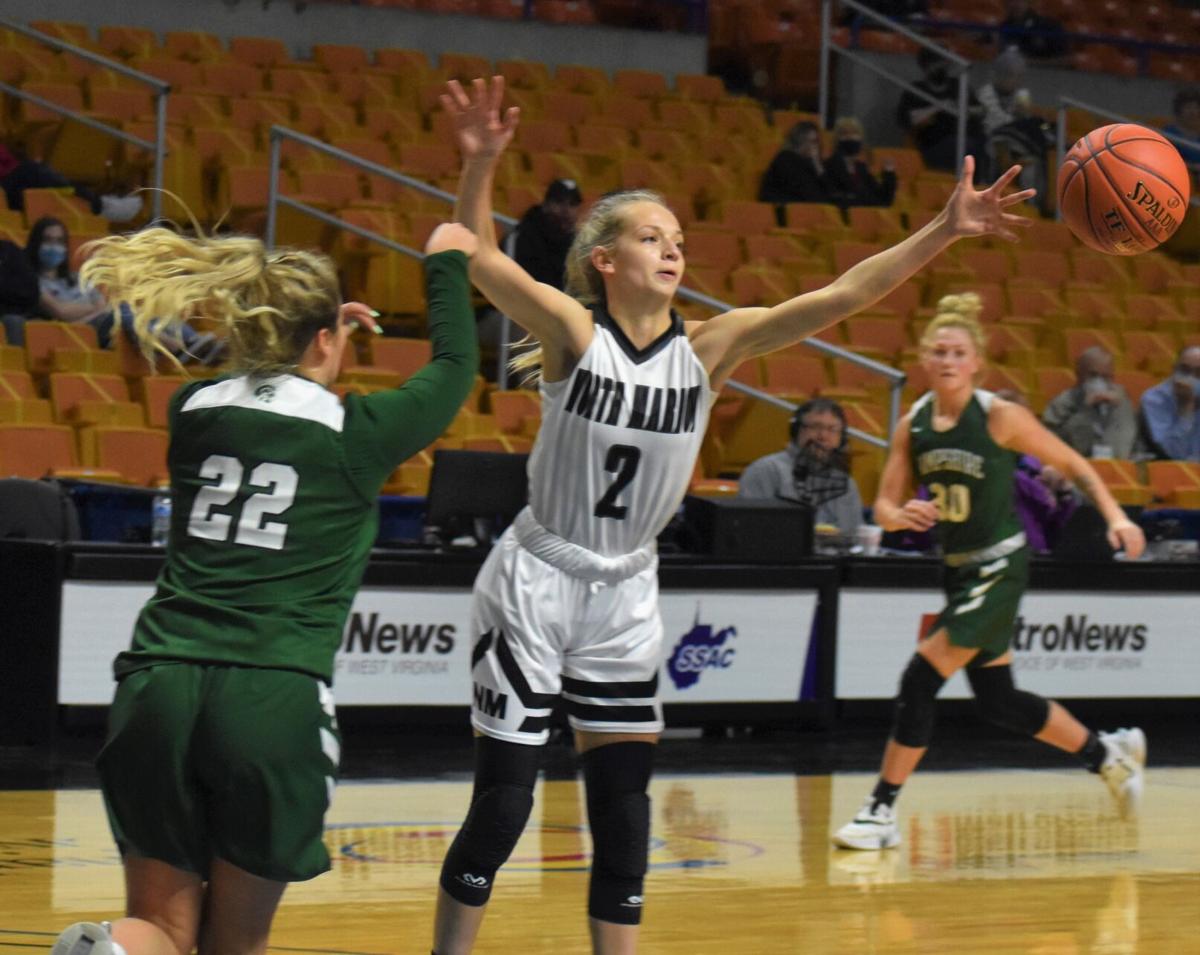 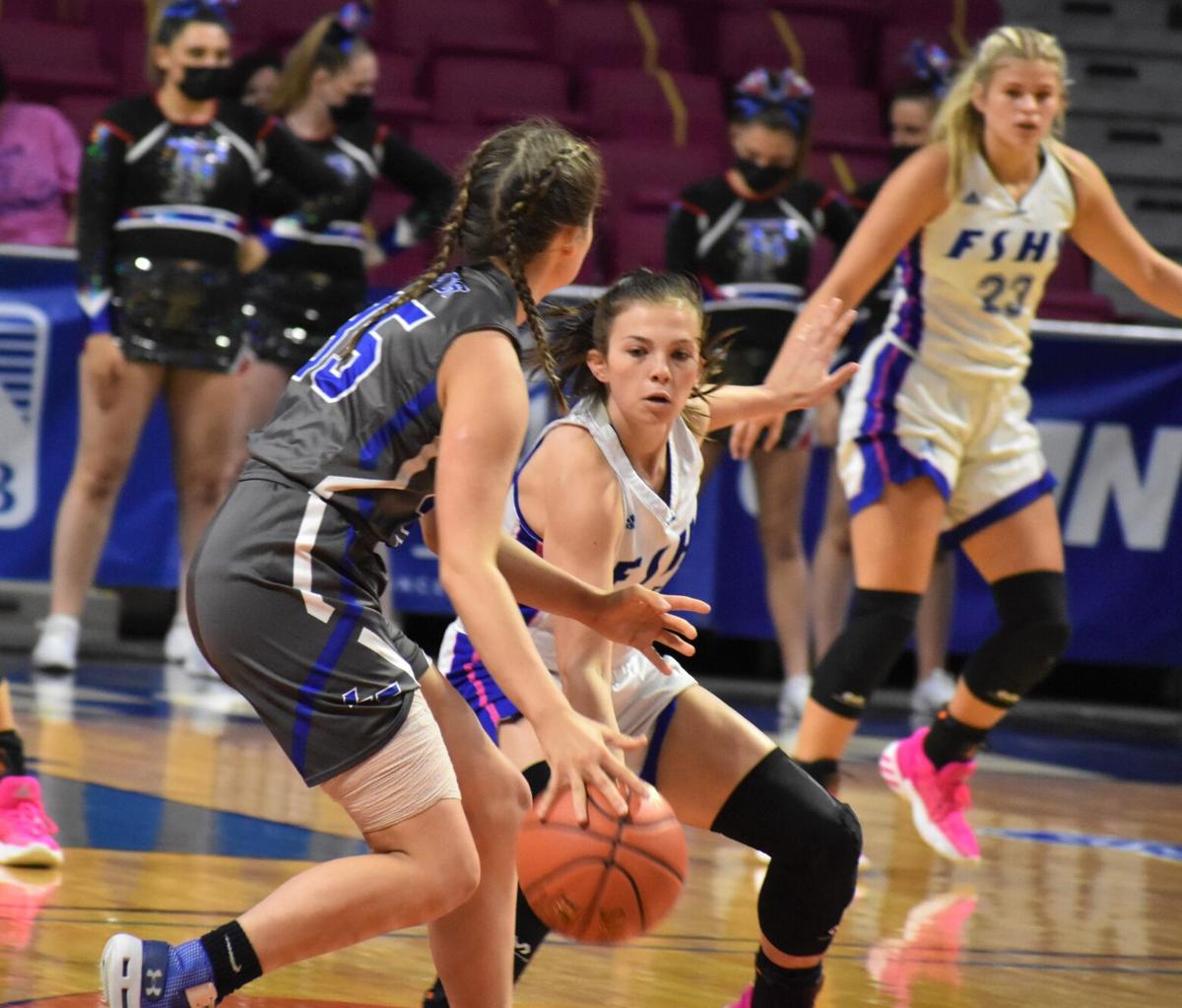 CHARLESTON — Lewis County sank into an abyss of dribble drives led astray in what wound up as a 56-29 thrashing, while Hampshire melted into a puddle of passes gone awry in what eventually amounted to an 80-47 pummeling during Wednesday’s Class AAA WVSSAC state basketball quarterfinals at the Charleston Coliseum and Convention Center.

“We pretty much knew what they were going to do from the start, but we didn’t stop it and it became a pretty big hole to come back from. They’re just a very good team who is tough to play,” Lewis County coach Kenton Bozic said in reflection of his team’s loss.

“We were very confident going in, but we just had some nerves with a lot of young girls going in, and it obviously wasn’t the outcome that we hoped for,” Hampshire coach Julieanne Buckley said in the aftermath of her team’s defeat.

On the other side of those losses on Wednesday for the Minutemaids and the Trojans, respectively, was the ferocious physicality of No. 1 Fairmont Senior and the havoc of No. 2 North Marion, as Marion County’s two behemoths wrecked their opponents with their trademark defensive destruction of non-stop activity and unrelenting pressure.

That defensive backbone of 94-feet, full-court fury — and the corresponding ripple effects around it — have long shaped each of the Polar Bears’ and Huskies’ rich recent history in Charleston under head coaches Corey Hines and Mike Parrish, which includes a combined eight state title game appearances and six total state titles, including each of the last three in the past 11 completed seasons — excluding 2020.

For years, even a full decade now, West and North have broken and crumbled countless opposing offenses with its pressure, and there should be no shame for either Lewis County or Hampshire — both having triumphed to breakthrough state tourney berths this season — in becoming the Polar Bears’ and Huskies’ latest victims.

The carnage posed by Fairmont Senior and North Marion in Wednesday’s latest state tournament victories created a combined 64 forced turnovers and 30-of-95 shooting (31.5%).

“Defensively, that’s what we take pride in,” Hines said postgame after his squad forced 34 turnovers and limited Lewis to 34.3% (12-of-35) shooting. “If you look at all of the times we’ve been successful down here, it’s never been because we shot the lights out, it’s usually because we’ve played really good defense. You can beat somebody 90-70 and that’s cool, but hey, if we beat them 50-30, I’m gonna still take that.”

“We just talked about what we had to do to come out and be successful and that’s what we did,” Parrish said in the wake of his team’s win over Hampshire, one in which they held the Trojans to 30% (18-of-60) shooting and forced 30 turnovers. “We flew around a lot in the first half and got in the passing lanes.”

Yet, for all of the similarities within the rough outline of the two schools’ daunting defensive styles — sweltering traps, active hands, hawkishness playing the passing lanes — there’s distinct and distinguishable differences.

The Polar Bears annihilate opponents with sheer force, toeing the line of legality when it comes to body bumps and reach-ins — as well as the general societal concept of personal space. They shuffle with ball handlers stride-for-stride, riding their bodies and redirecting them smackdab into oncoming double-teams and peel-off traps where they’re swarmed and swallowed up whole. Opposing coaches beg for foul calls amid the physical punishment, and players whine for whistles amid the mental taxation.

There’s a certain unmerciful and methodical violence to it all.

The Polar Bears have long operated by such principles throughout Hines’ illustrious tenure, which includes 250-plus wins and four state title game appearances, including two championships (2017, 2019), but this year’s version is perhaps the most cutthroat yet. Washenitz is the epitome of non-stop aggression and athletic dynamism atop Fairmont’s pressure and co-star and best friend Meredith Maier is cut from the same cloth at the tail end of it. And roving and orbiting around those two is the duo of Beresford and guard Emily Starn, two hard-nosed hawks with super-speedy feet and a killer’s attitude.

“We’ve been really confident coming in and that’s just our mentality,” Maier said after Wednesday’s win. “We just never give up — I think you can see on the court sometimes against certain teams where we are in better shape than them and that helps us and allows us to press longer, which allows us to get more transition points.”

The Huskies, on the other hand, destroy opponents with energy and zeal, running them ragged to the point where they wear down to the absolute nub of their existence. They wield their hands and arms like rotating propellers, challenging opponents to needle passes through teensy, shapeshifting windows while they rack up deflections. And while they concede more direct dribbling lanes to ball handlers than the Polar Bears, they bolt to-and-fro in every direction to recover, almost as if they’re teleporting the full area of the court.

It’s exhausting for opponents to contend with as they fall into an enticing trap of trying to outrace the Huskies and make the most of small fissures and numbers advantages before they evaporate.

“It’s definitely all about our energy,” said North Marion junior center Katlyn Carson heading into the state tournament. “We all rely on each other and we all play a specific part or role, and we just count on each other to do their job.”

Parrish’s Huskies have sucked the wind and spirit of generations of players over his 18 seasons in which he’s compiled 325-plus victories and four state championships, including a Class AAA three-peat back from 2009-11 when North Marion went a combined 75-2. This season’s edition of the Huskies defense will likely never be heralded as the program’s apex, but that doesn’t mean it doesn’t have the necessary vigor and moxie to win North Marion a fifth state title.

At the top of North’s 2-2-1 press, senior guard Karlie Denham is tailor-made for the system as a phantom who zips from one trap to the next, and freshman Emma Freels has steadily started to unveil an aggression that matches the effectiveness of her wiry athleticism. Sophomore all-state candidate Olivia Toland and first-time starter Adryan Stemple are handily equipped to patrol the alignment’s second level, and Carson looms as the safeguard in the back ready to disintegrate any shots at the rim that emerge from an opponent’s well-executed, tic-tac-toe-style press break.

“We have to play with energy and we have to shoot well (in Charleston), because if you don’t shoot well and you don’t play with energy, you end up getting bad results,” Parrish said before the tournament. “Preferably, you want to do both of them, but if one’s not working, then the other has to.”