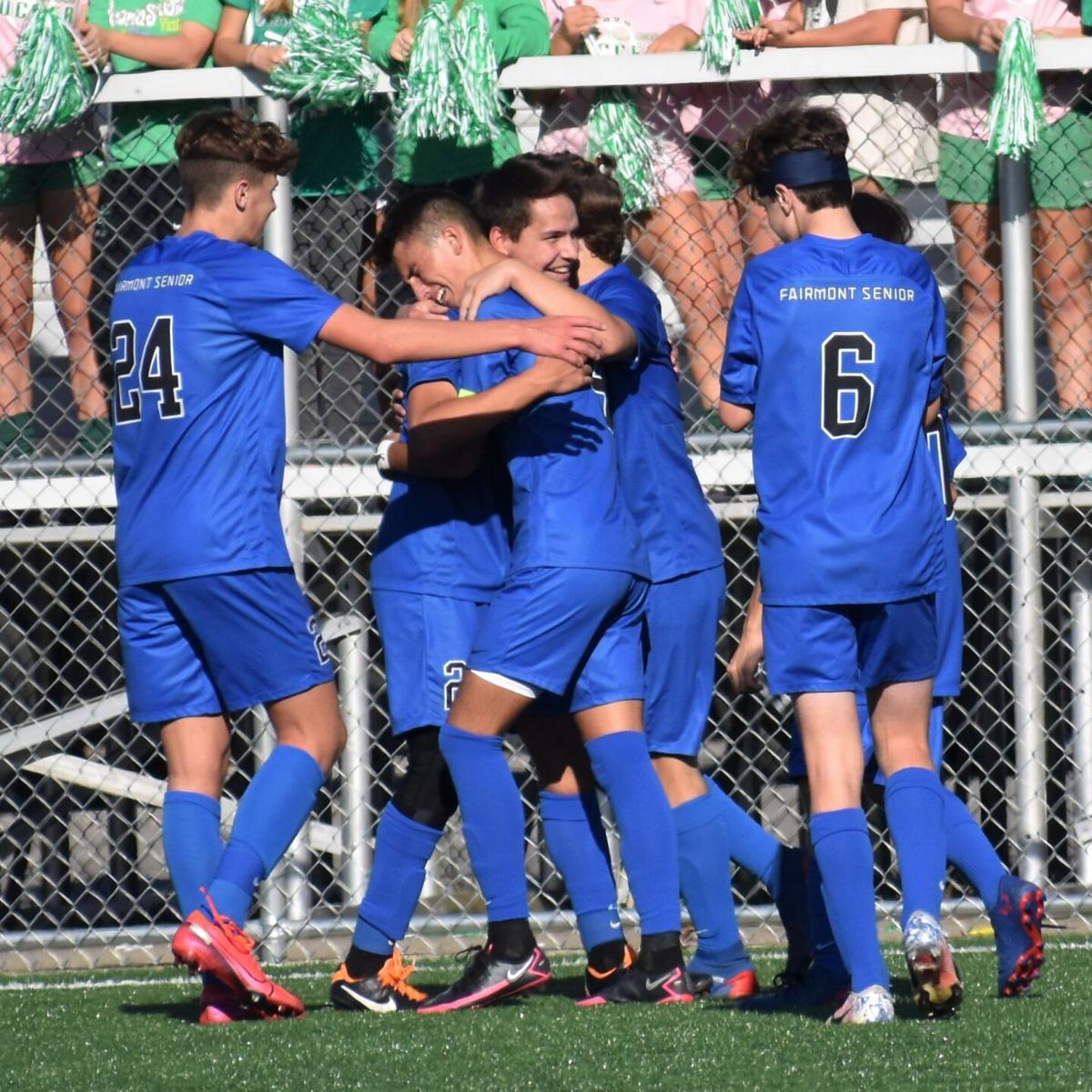 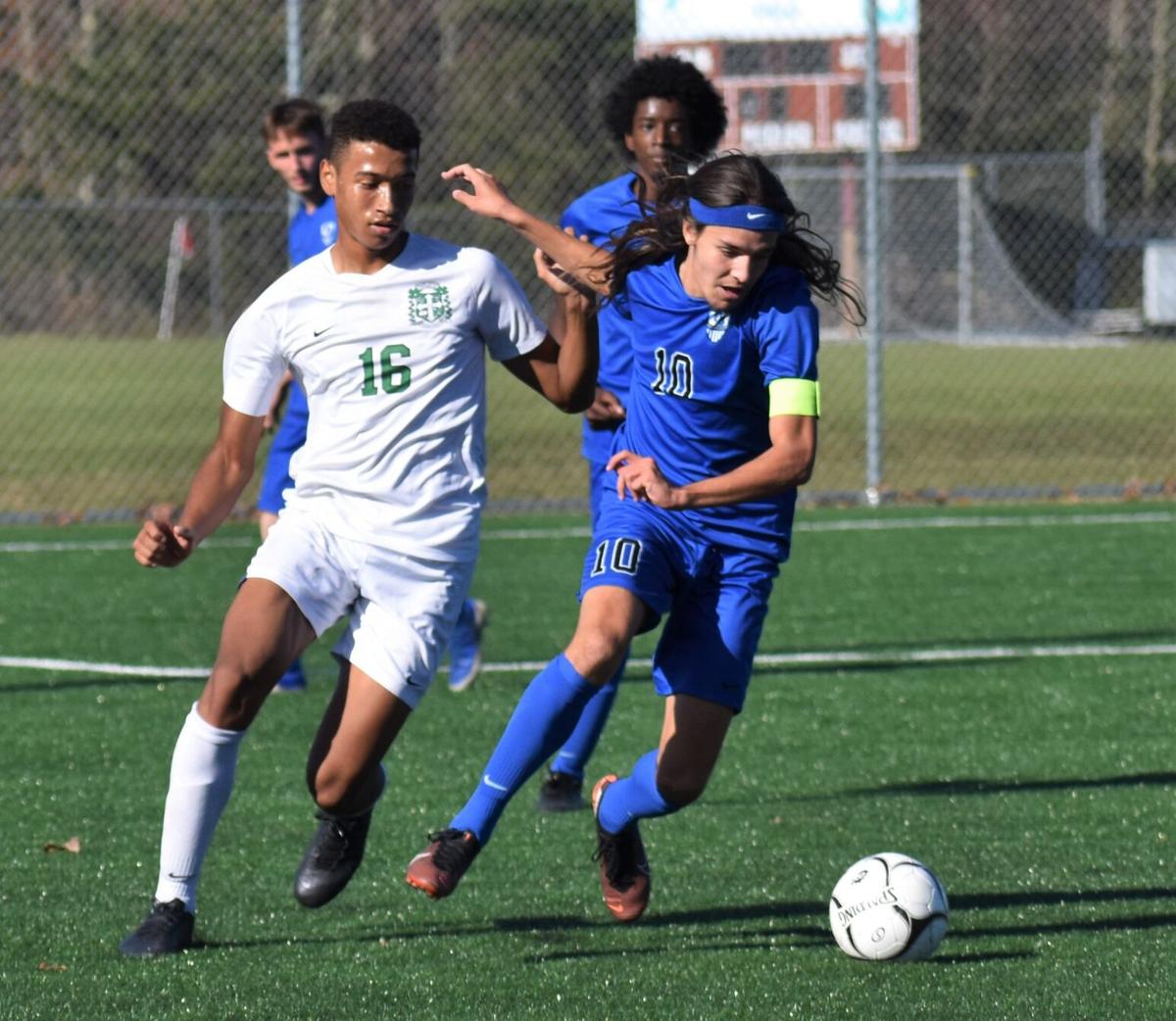 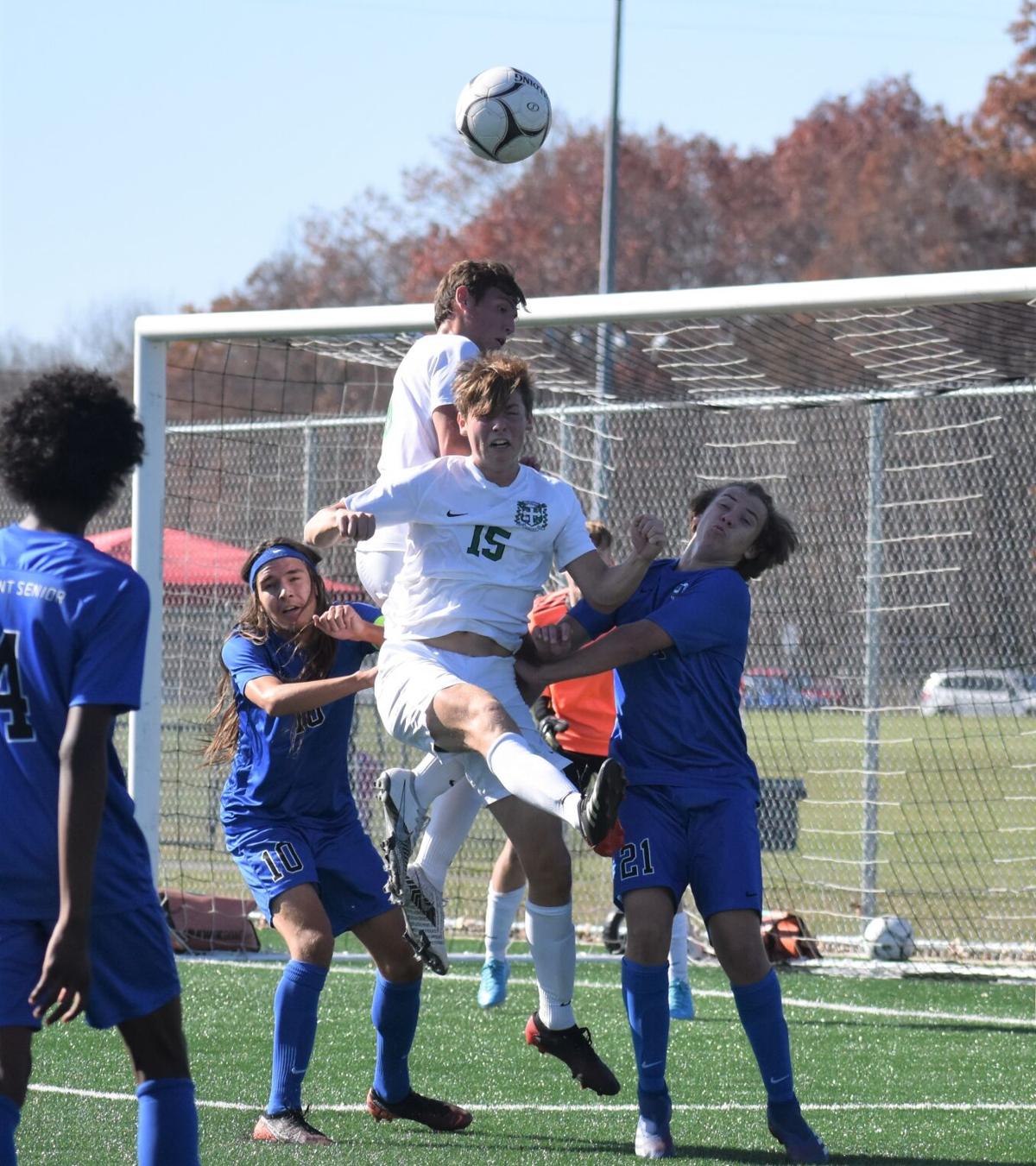 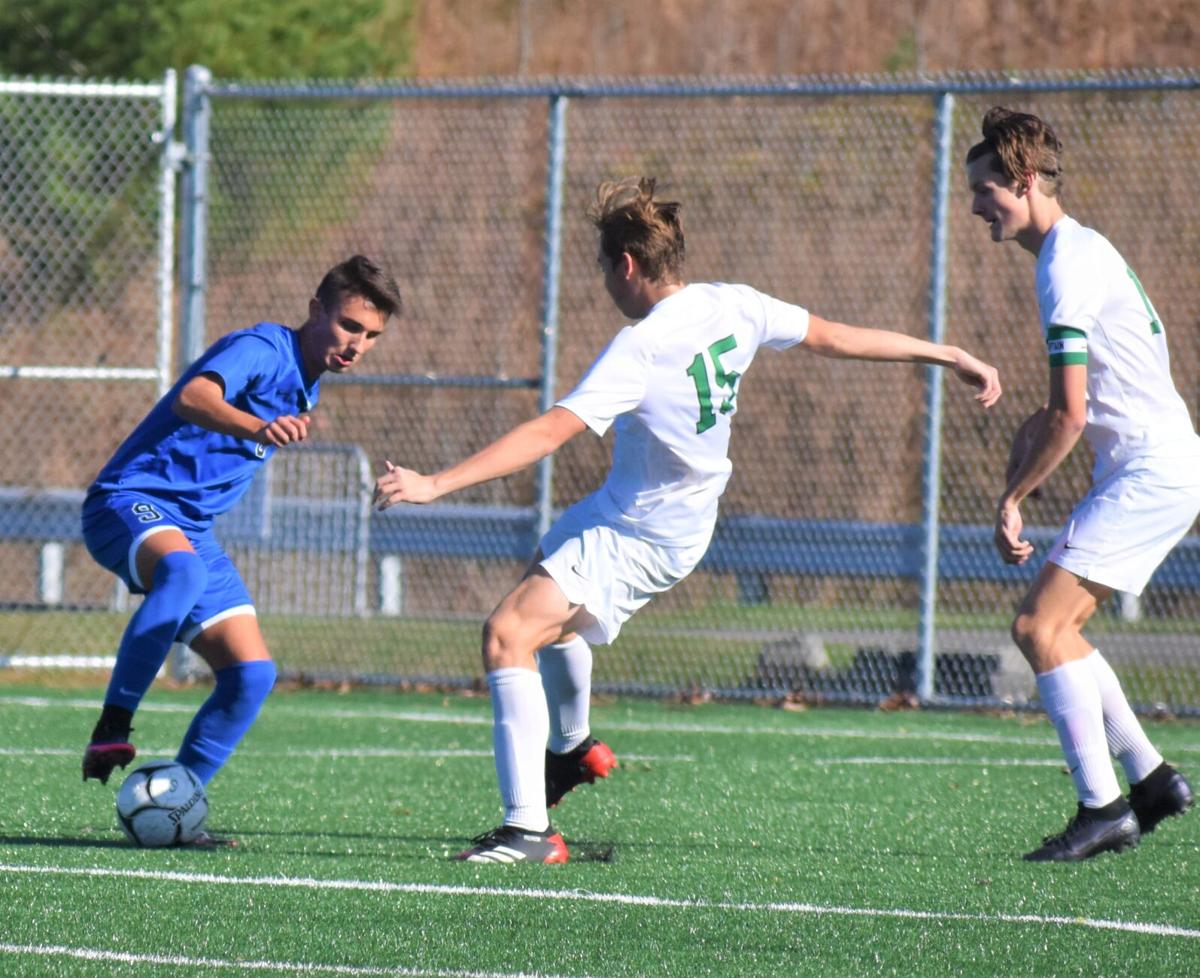 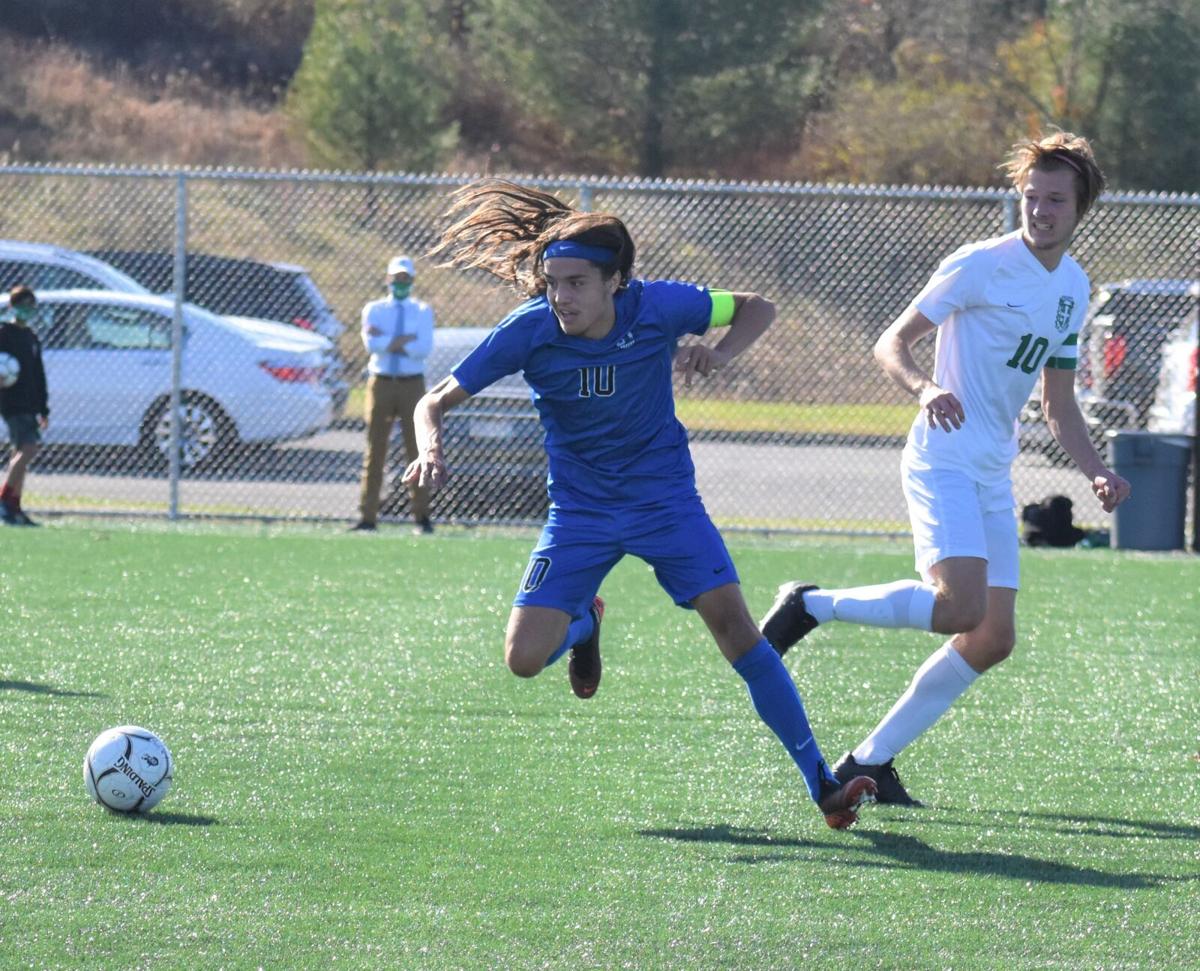 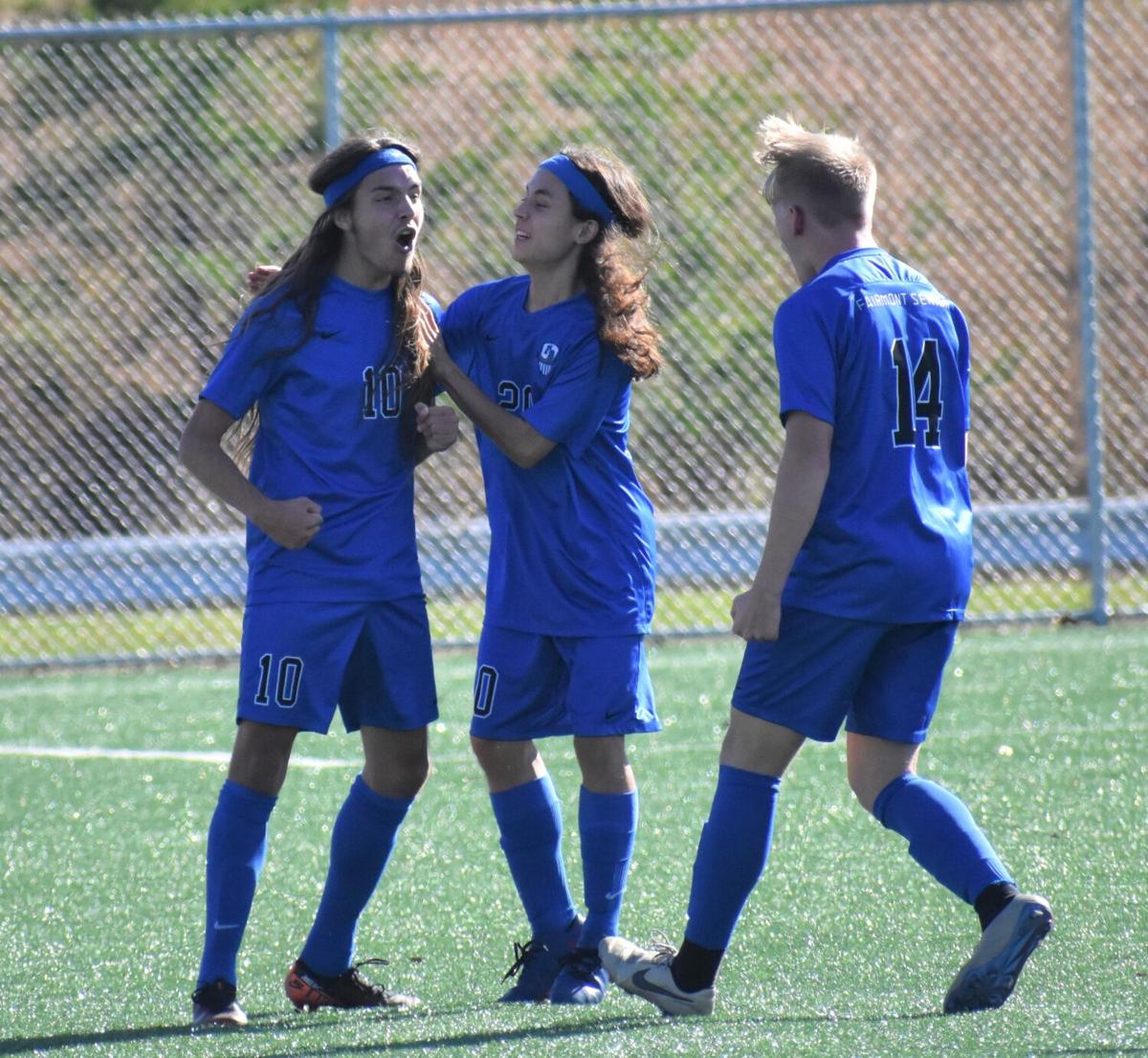 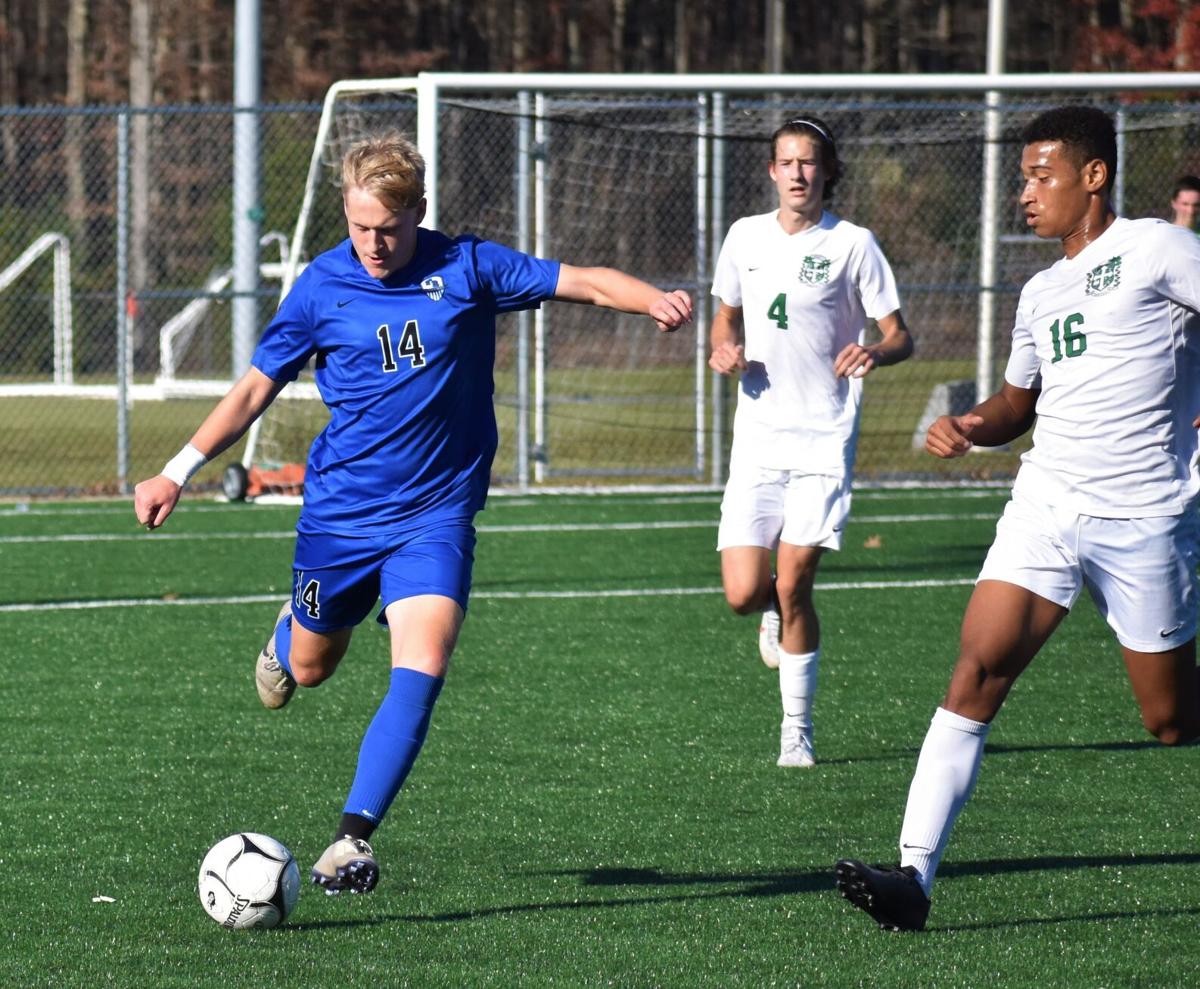 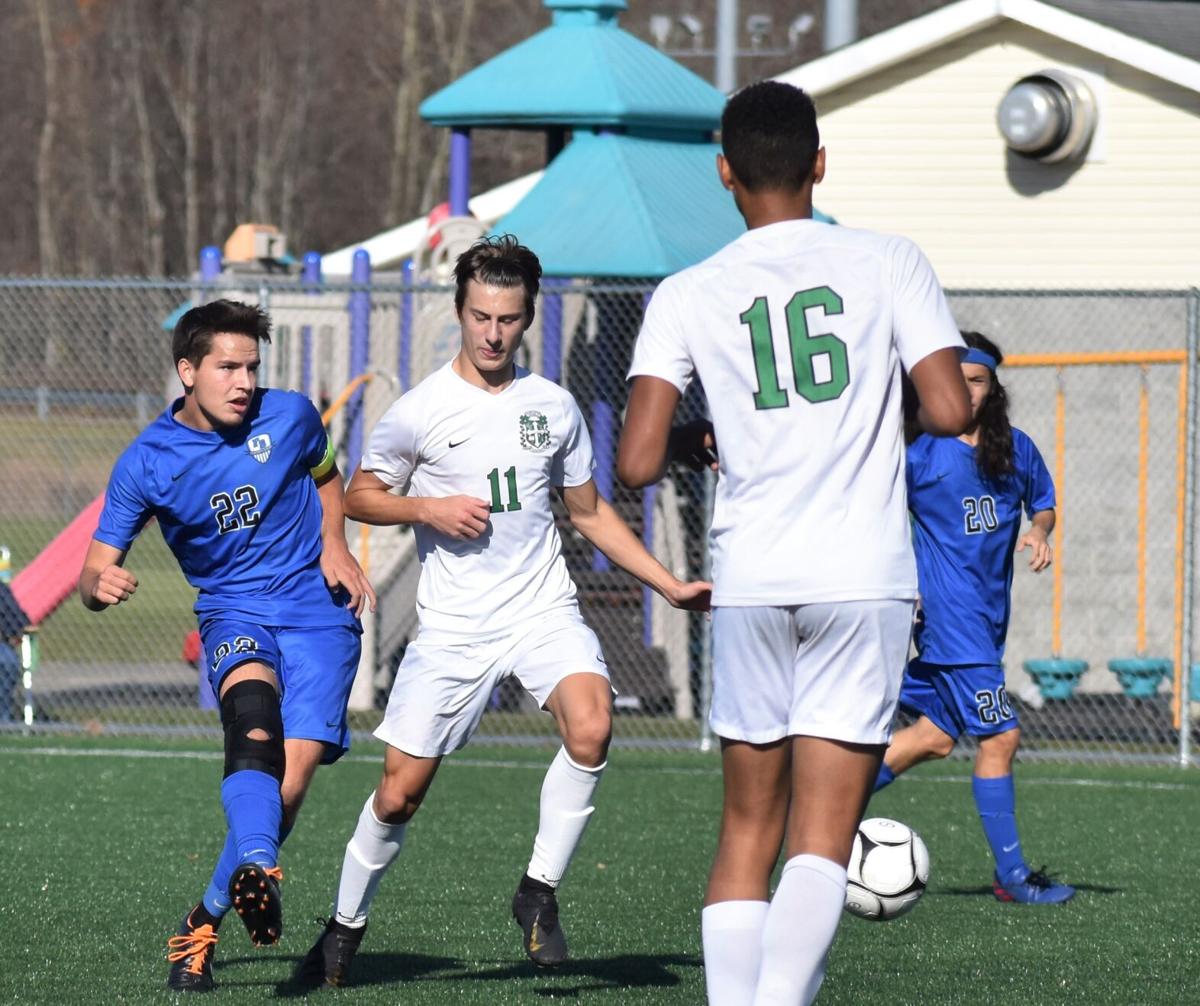 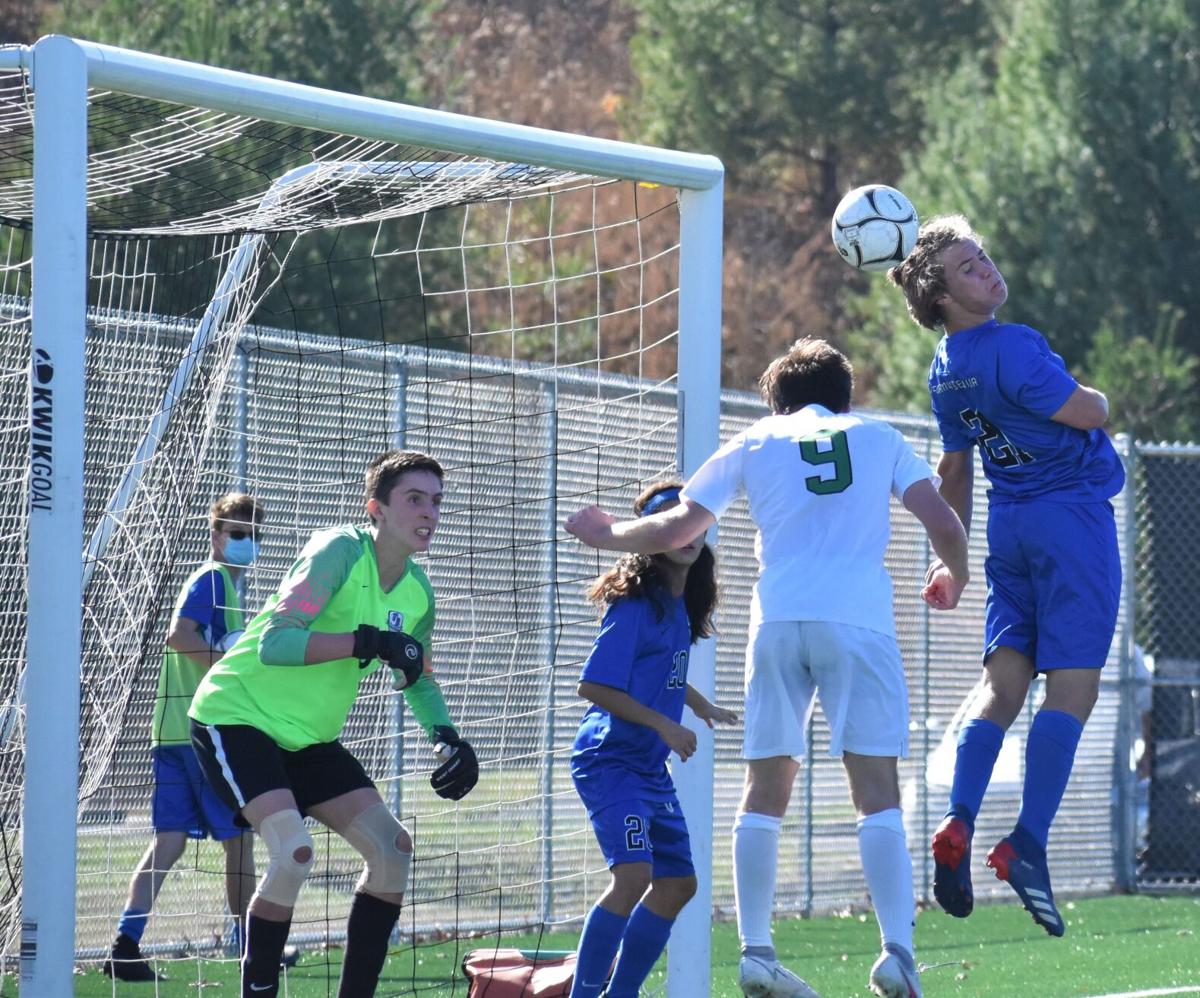 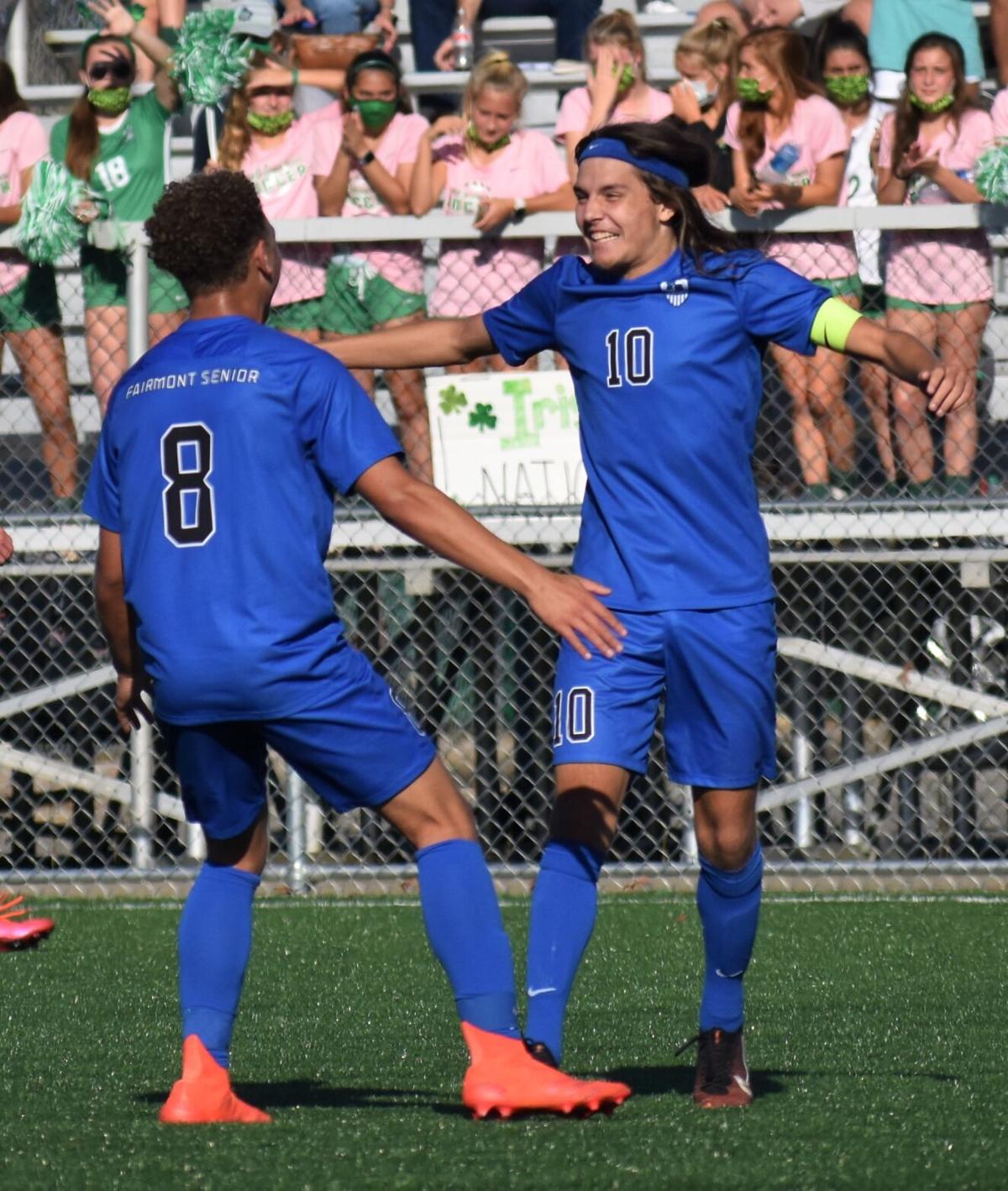 Fairmont Senior's Jonas Branch (10) and Ro Jones celebrate following the team's state championship victory in Beckley this past fall. Branch has been named the 2020 Times West Virginian Boys Soccer Player of the Year after recording 30 goals and 32 assists while leading the Polar Bears to a repeat state title this fall. 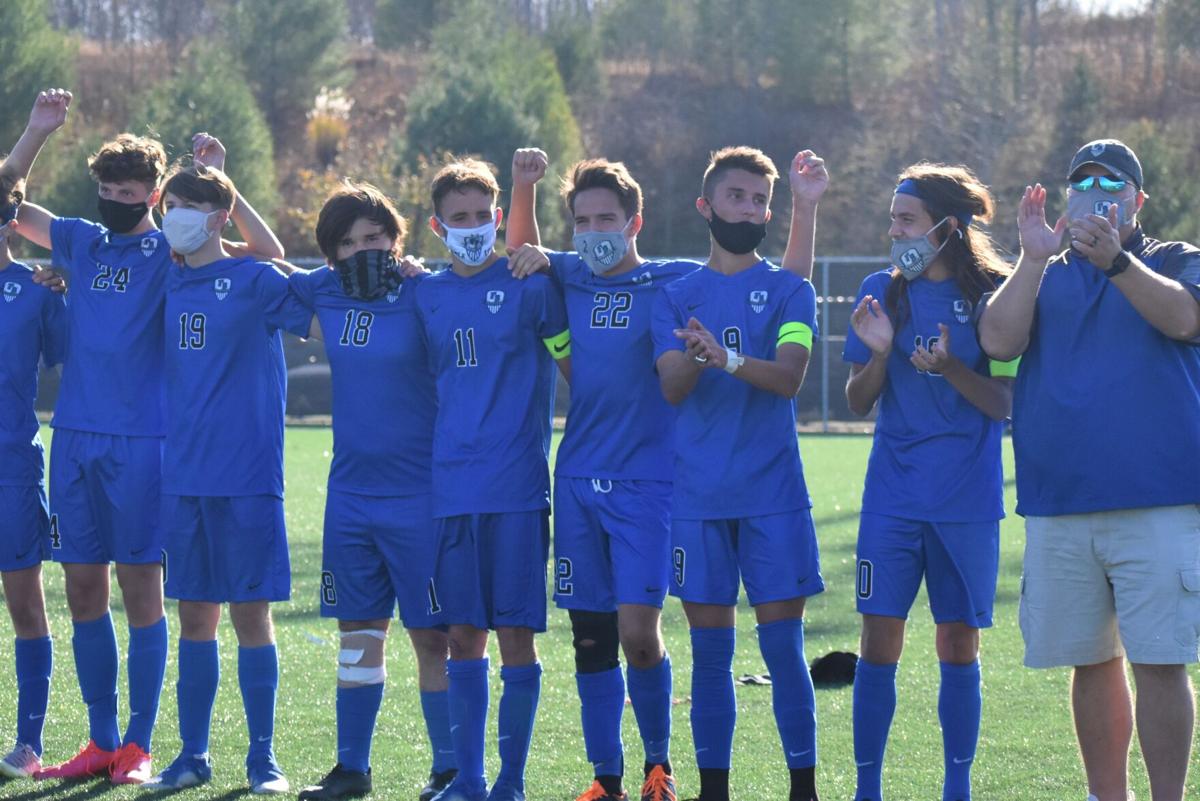 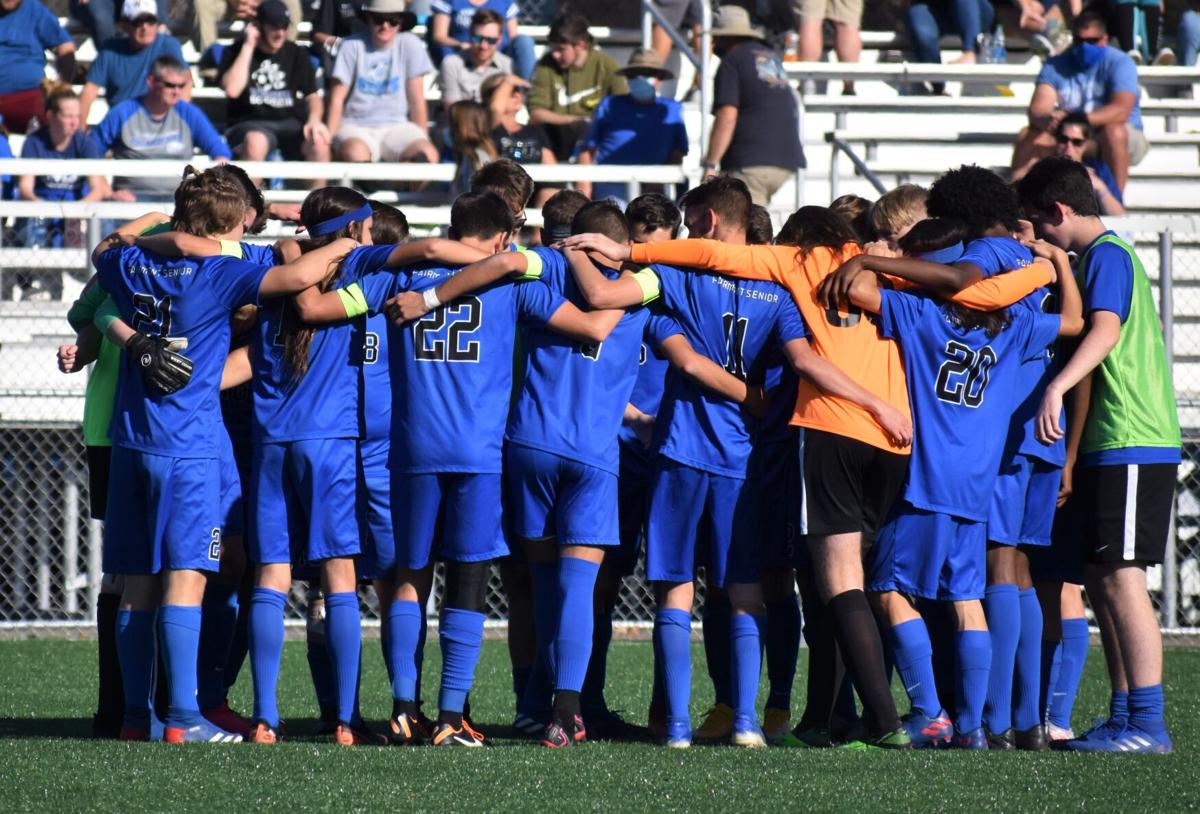 Fairmont Senior huddles before the second half of Saturday's state title game.

Fairmont Senior's Jonas Branch (10) and Ro Jones celebrate following the team's state championship victory in Beckley this past fall. Branch has been named the 2020 Times West Virginian Boys Soccer Player of the Year after recording 30 goals and 32 assists while leading the Polar Bears to a repeat state title this fall.

Fairmont Senior huddles before the second half of Saturday's state title game.

BECKLEY — All season long, Fairmont Senior High boys soccer touted its unshakeable belief in one another as the backbone of its quest for a repeat state championship, and played up its family-like togetherness as the heart of its mission for the program’s third star.

Time and again, as Fairmont Senior rolled through the regular season, then the sectional tournament, and then the regional to get back to the state tournament in Beckley, head coach Darrin Paul and FSHS’s team captains beamed over such traits as the true identifiers that made the Polar Bears an elite team.

But come Saturday’s Class AA-A state championship game, with it all on the table for Fairmont Senior — the repeat, the program’s third-ever title — opponent Charleston Catholic forced the No. 1-seeded Polar Bears to prove their mettle was exactly as strong as their mouths said it was. The Irish, who were trying to win the program’s first state title since 2014, were unafraid and undaunted by defending champion Fairmont Senior to start Saturday’s title game and they hit FSHS with consecutive gut punches in the opening 20 minutes to take a 2-0 lead and bring the Polar Bears to their knees.

And when the final seconds ticked away, there they were, standing as repeat Class AA-A champions having just etched their finest triumph yet with a come-from-behind 3-2 victory.

“I told the boys after the game that I didn’t think anything could top last year’s (title game), but the fact that they went down 2-0 and they showed their resiliency that they’ve shown all year, it just shows how committed this team is and how much this team loves each other,” Paul said. “They refused to quit, and I’m just very proud of them.”

The Polar Bears rallied back to outscore the Irish 3-0 over the games final 70 minutes, with senior captain Jonas Branch ultimately delivering the go-ahead goal on a rocket of a shot in the 47th minute.

“We had to get over that mental aspect that we were down, but like I’ve said, mentally, we’re so strong, we can come back from anything,” said FSHS junior captain Bubby Towns, who scored Fairmont’s first goal on a longball header in the 17th minute.

“We were a little scared in the beginning when they scored those two right off the bat,” added FSHS senior captain Cale Beatty, “but we knew even at the beginning of the game that if they took the lead, we were gonna come back. We just wanted it.”

Each of Catholic’s early-game strikes came off set pieces. Zion Suddeth scored first for the Irish in the third minute when he put in a rebound shot after Catholic played a free kick off the crossbar. And then in the 11th minute, Catholic’s Liam McGinley bopped in a header on the backside of a perfectly-placed corner kick from senior captain Aiden Paul to make it a 2-0 game.

“We told (our kids) at half that we gave them all of their opportunities in the first half with set pieces — we actually knocked their first goal into the net — so we knew if we just played smart defense, we could lock it down,” Paul said. “Isaac (Branch) is, I think, the best defender in the state, and (goalkeeper) Eli (Day) stepped up with some big saves.”

“Our defense had some rough spots early in the year,” said Isaac Branch, FSHS’s senior captain center back, “but as soon as it hit playoff time, we stepped it up and I’m really proud of everyone who played defense (today).”

Down 2-0, Fairmont Senior quickly fired right back at Catholic with a pair of goals in a four-minute span to knot it at 2-2 in the 21st minute. Towns first got the Polar Bears on the board when he got behind the CCHS defense on a longball pass and got off a header just in the nick of time versus charging CCHS goalkeeper John Patnoe. Moments later, Jonas Branch put in the first of his two goals when he found a shooting pocket and zinged a rocket into the back of the net from almost 30 yards out.

“When we get down,” Isaac Branch said, “it almost helps us in a way because it gives us so much motivation to go to score.”

The two teams traded barbs for the remainder of what was an up-and-down, high quality first half of action, but neither squad could get an edge and went into the break 2-2.

But in the opening minutes of the second half, Jonas Branch spurned the Irish for his second goal of the game and a 3-2 Fairmont Senior lead when he again launched an absolute missile that whizzed past a lunging Patnoe and into the net.

“It was the moment I’ve been waiting for all my life,” Branch said. “I’ve never came in and stepped up in that final game, but today I really did.”

“It’s like I’ve said all year, I think we have three of the best players at their positions in Jonas, Bubby and Isaac; they just consistently pick the team up and work very, very well together,” Paul said. “They’re just special.”

“We knew we couldn’t make mistakes against Jonas and Bubby but also others, they have a lot of talent on that team,” Charleston Catholic coach Niall Paul said.

From that point on from when Branch delivered his second strike for a 3-2 FSHS lead, it was on the Polar Bears’ defense and midfield to bring home the win. Towns offered a bit of leeway here and there with dribble attacks — something Catholic assured he was going pay a price for as they battered him all game long with shoulder checks and shin-to-shin trip-ups — but for the most part it was a matter of holding off the Irish just long enough.

Branch and Beatty were the cornerstones of that defense as backline captains, but the three-man rotation of Carson Mundell, Gage Carlson and Isaac Yoneda were also vital in staving off Catholic’s set pieces. And at the front two levels, alongside Branch, Towns and sophomores Kaelen Armstrong and Nate Flower, Paul kept up a constant rotation with Ashton Cecil, Denzel Duvert, Ro Jones and Braylon Weekley to keep legs fresh.

“But I thought our boys played well and I loved that it came down to us and (Fairmont Senior) because I really respect Darrin and those players. I’m always impressed by them.”

Catholic got a couple of last-gasp opportunities on corner kicks, but it wasn’t able to muster a quality shot down the stretch as the Polar Bears seized the opportunity they had been targeting all year long.

“It really means a lot to us that we came back and (won it) like that,” Jonas Branch said. “Even when we’re down 2-0, we can play through adversity and still play our game. That just tells us that we’re the best team in the state.”