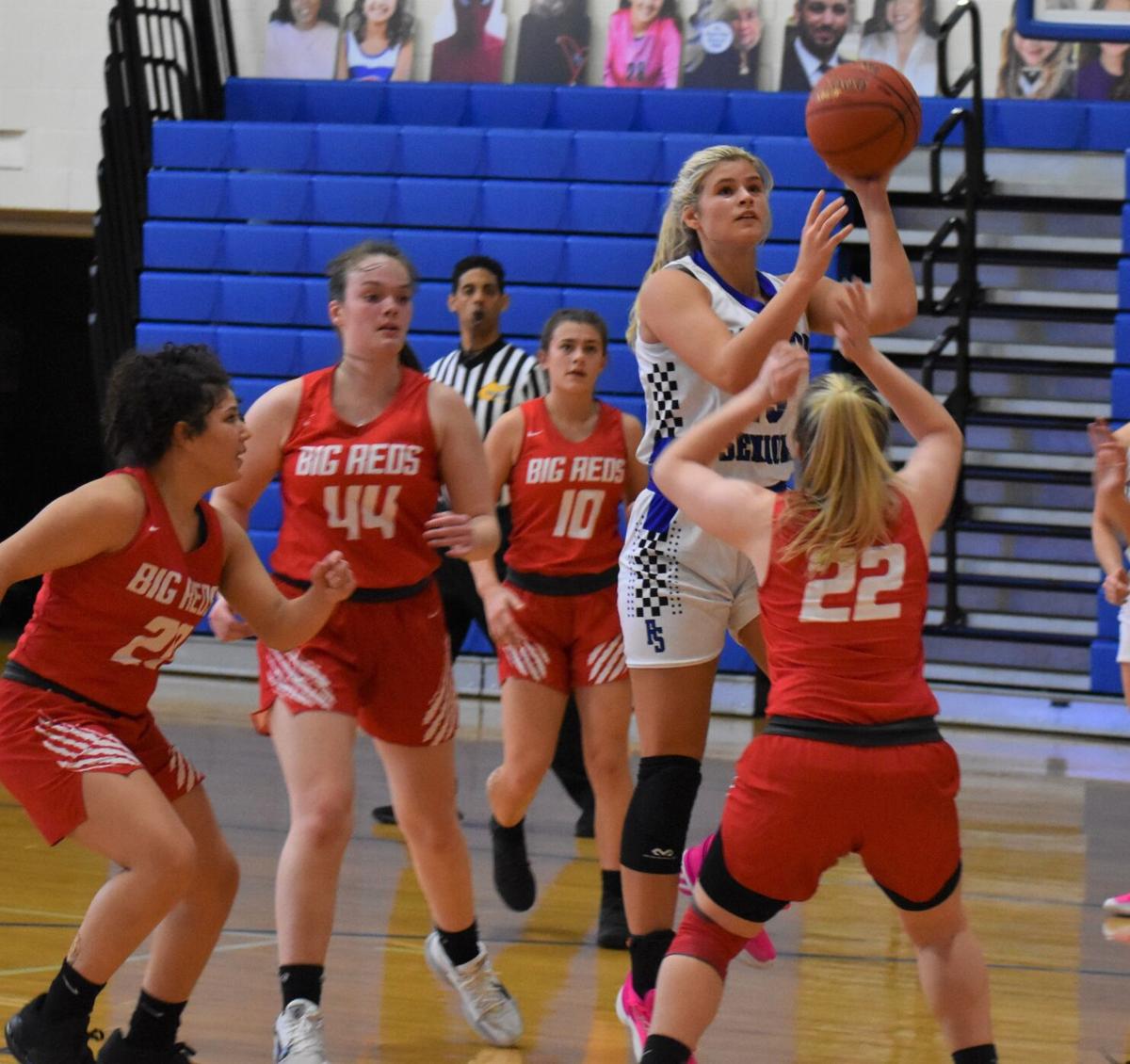 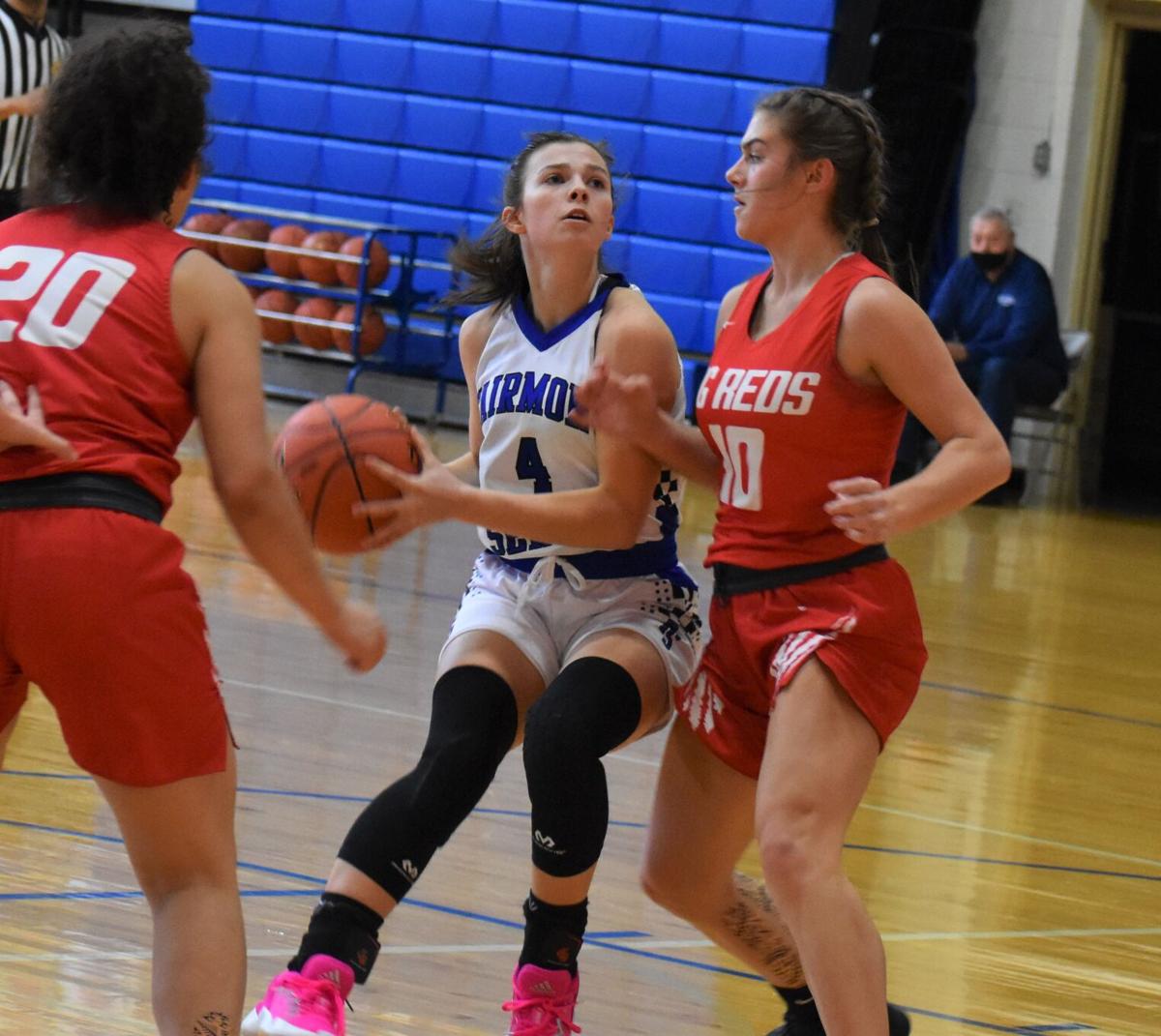 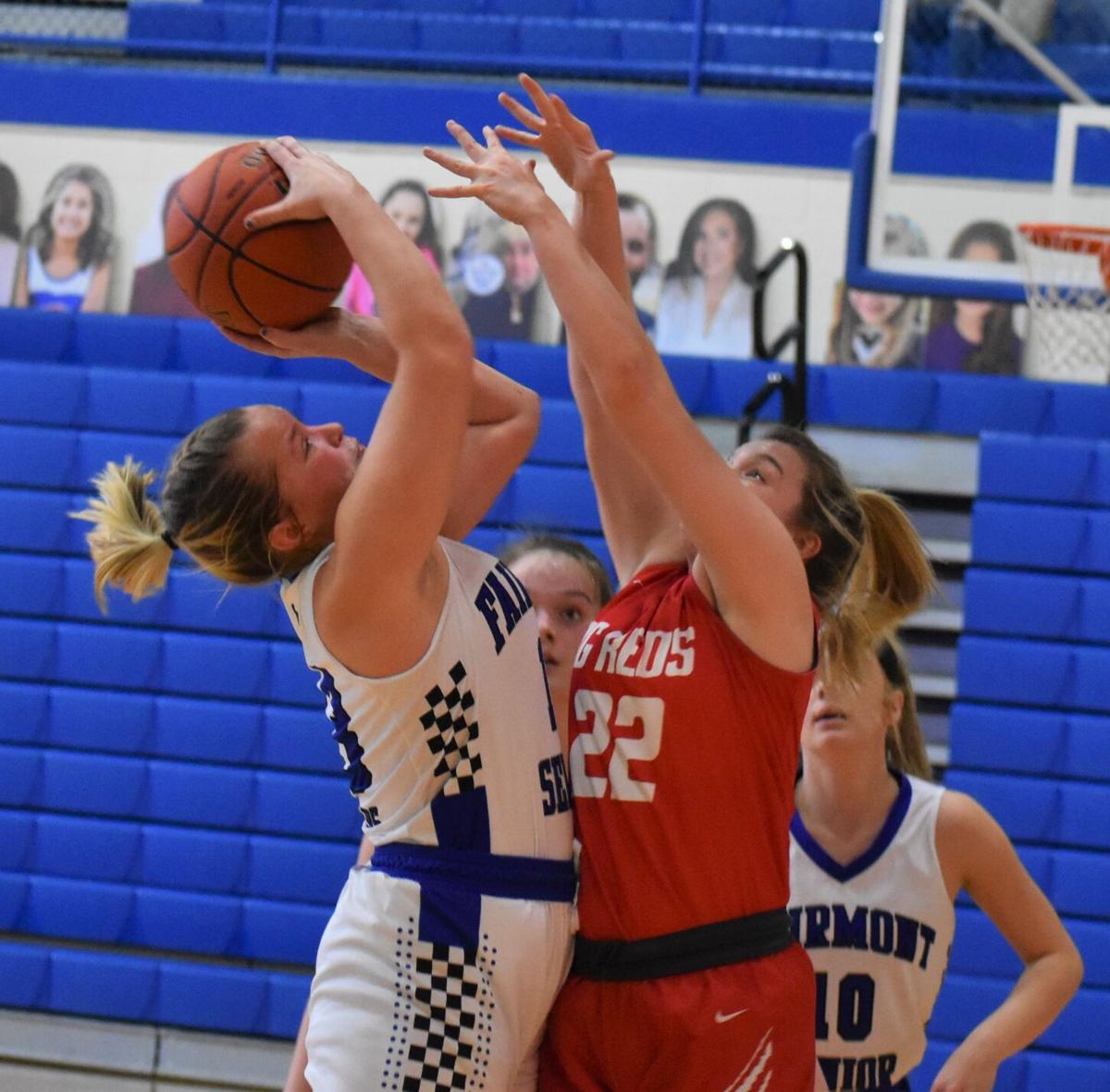 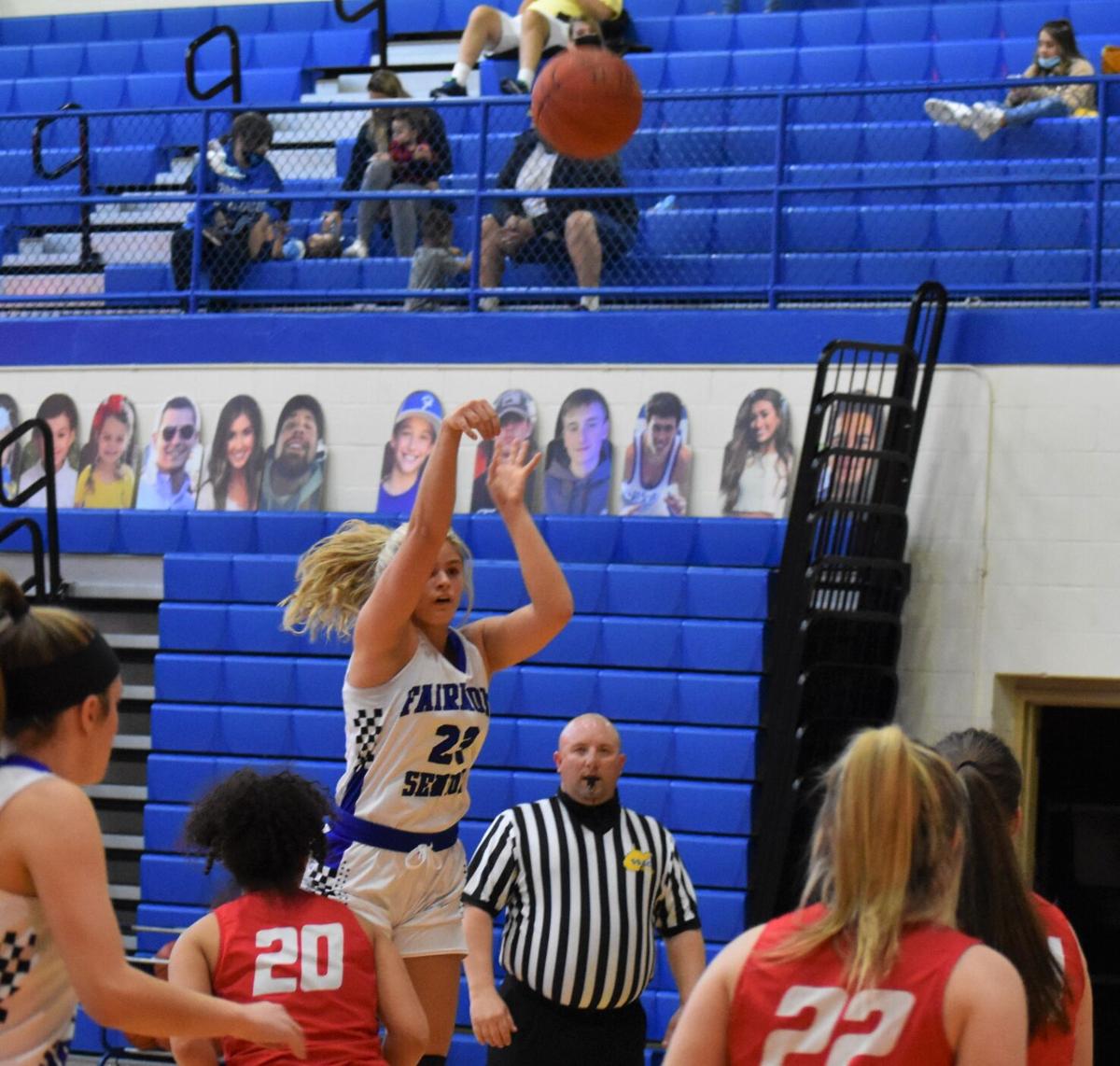 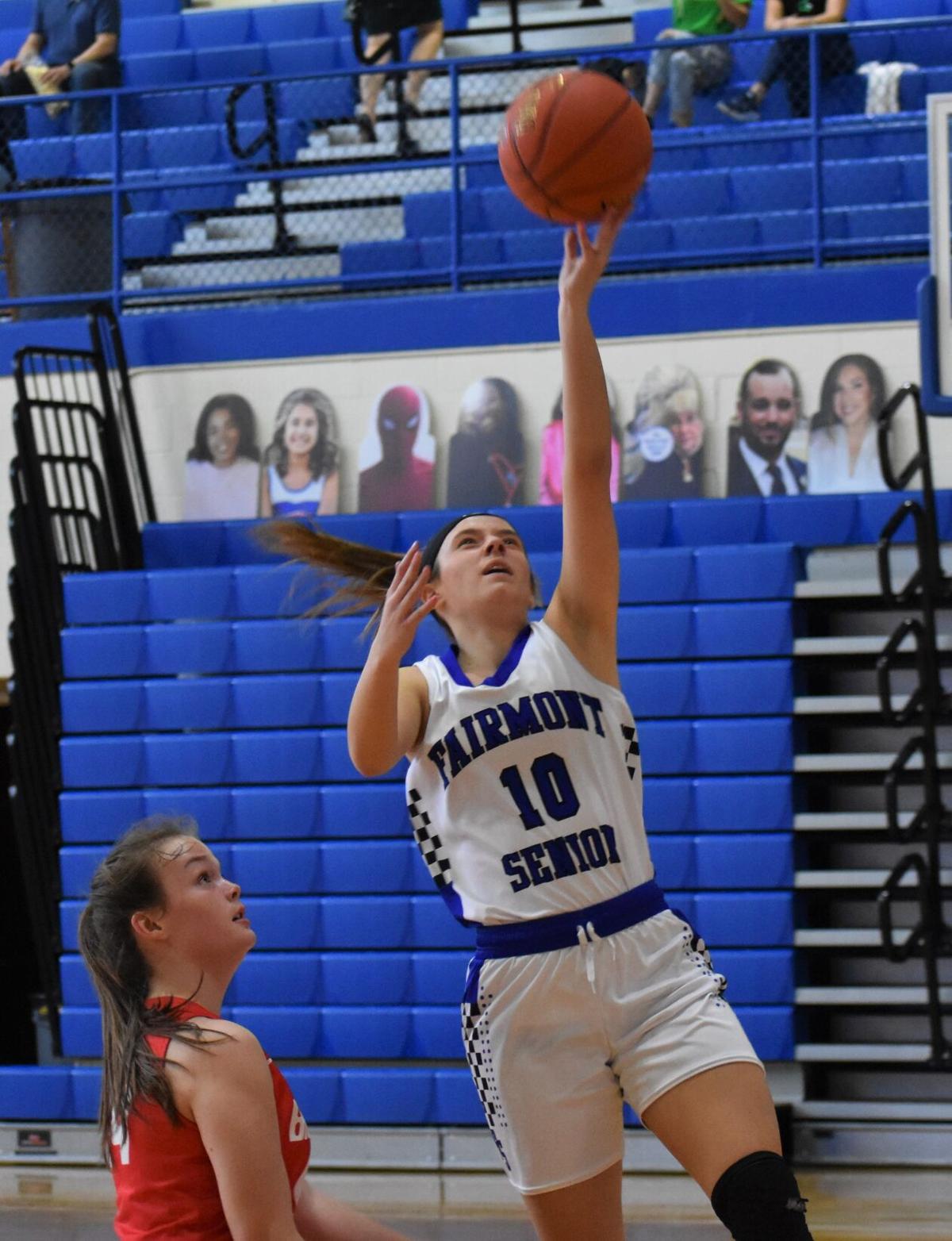 Fairmont Senior's Reagan Blasher shoots a layup in front of Parkersburg's Hayley McCale during a game earlier this season. 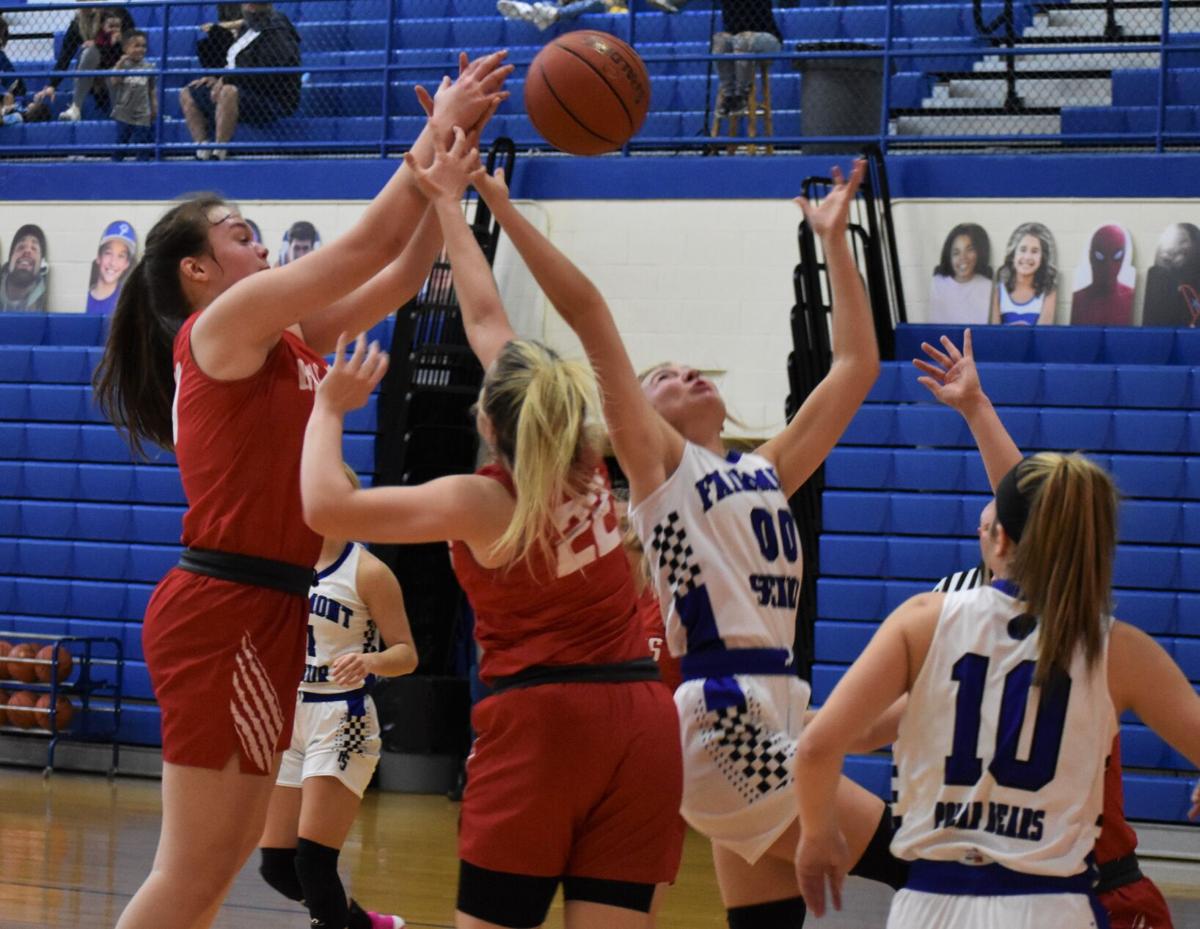 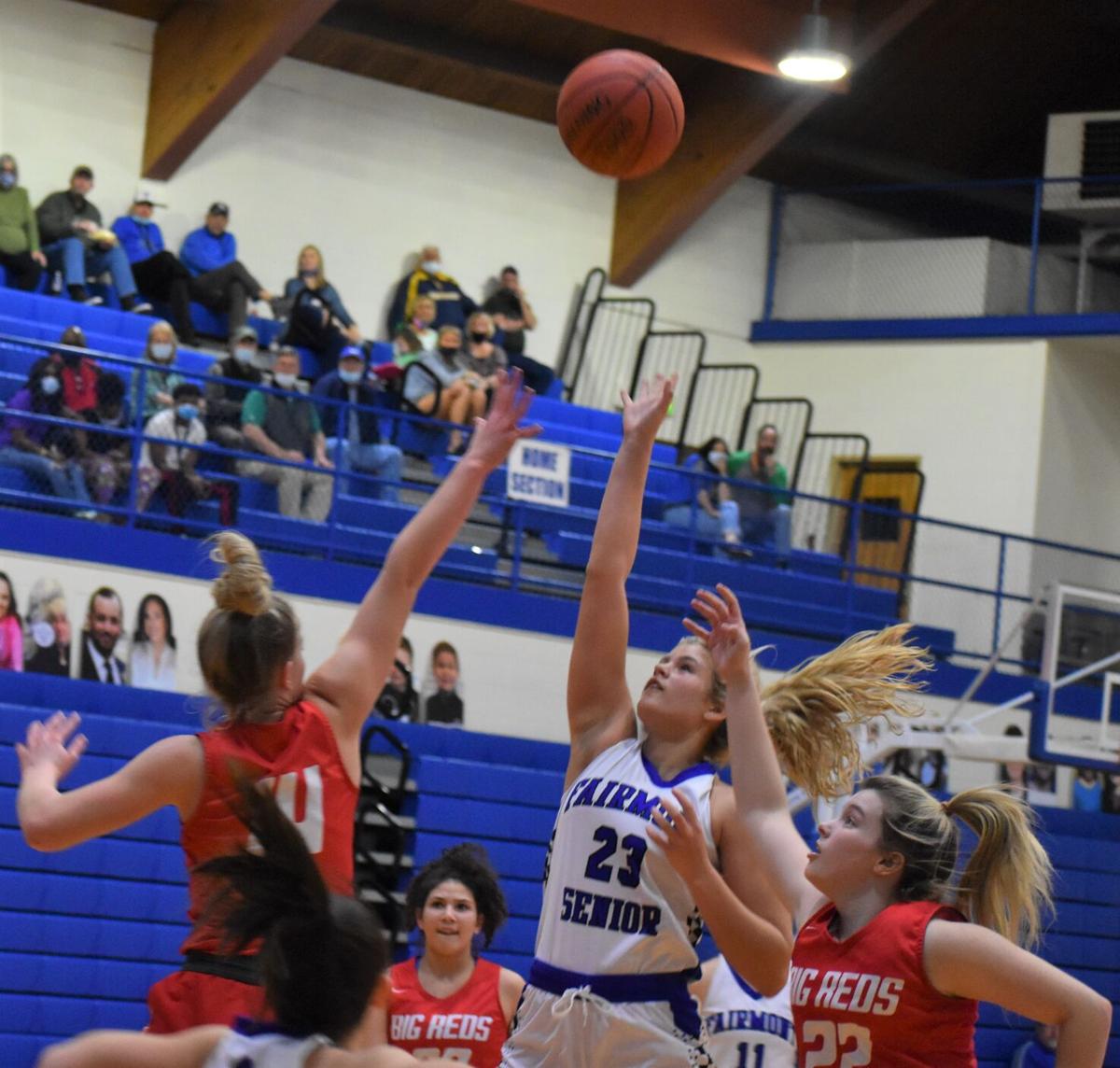 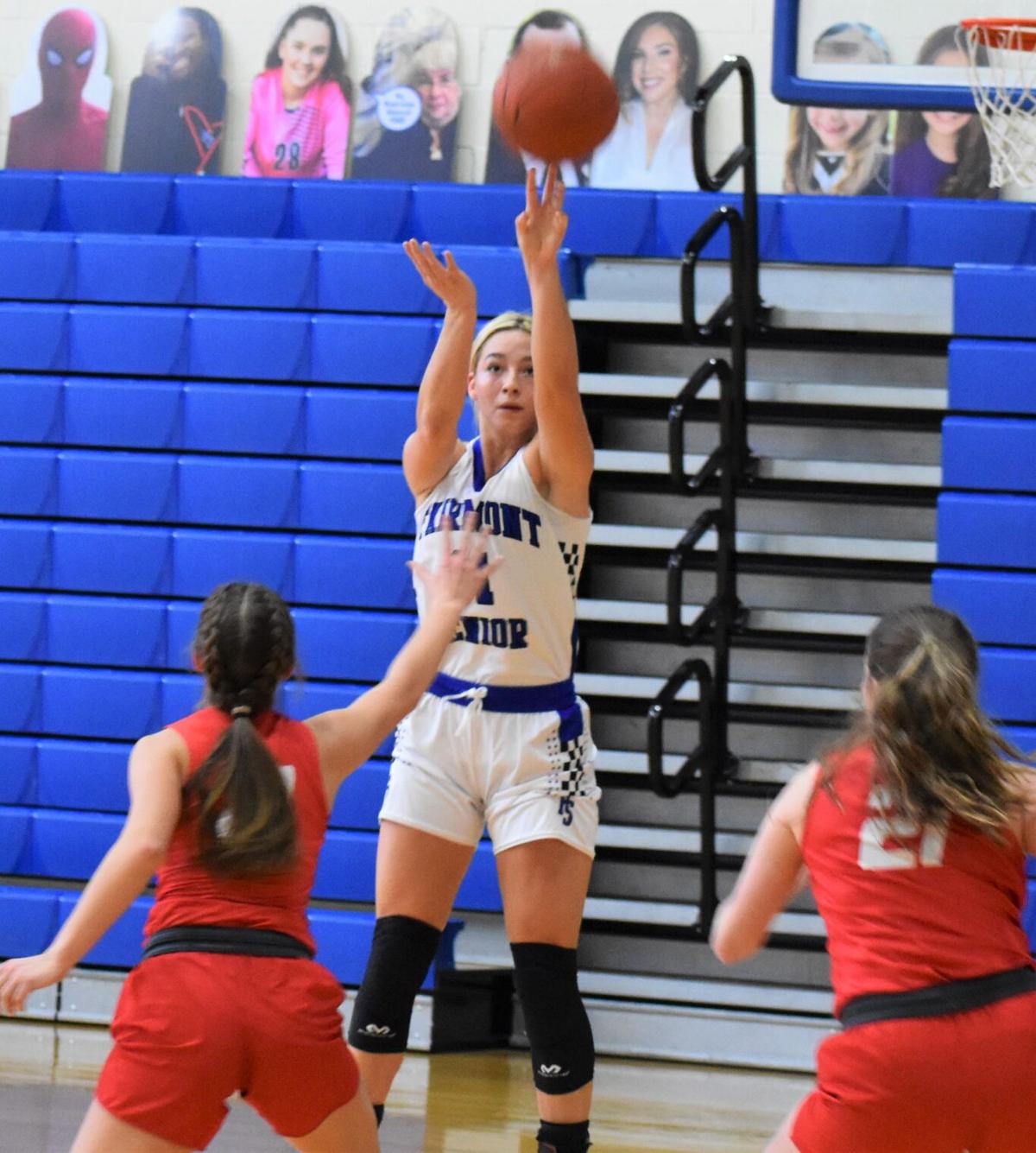 Fairmont Senior’s Marley Washenitz shoots over Parkersburg’s Payton Harvey and Riley Hilling during a game earlier this season at the FSHS Field House. Washenitz scored a game-high 22 points in Wednesday’s win over University. 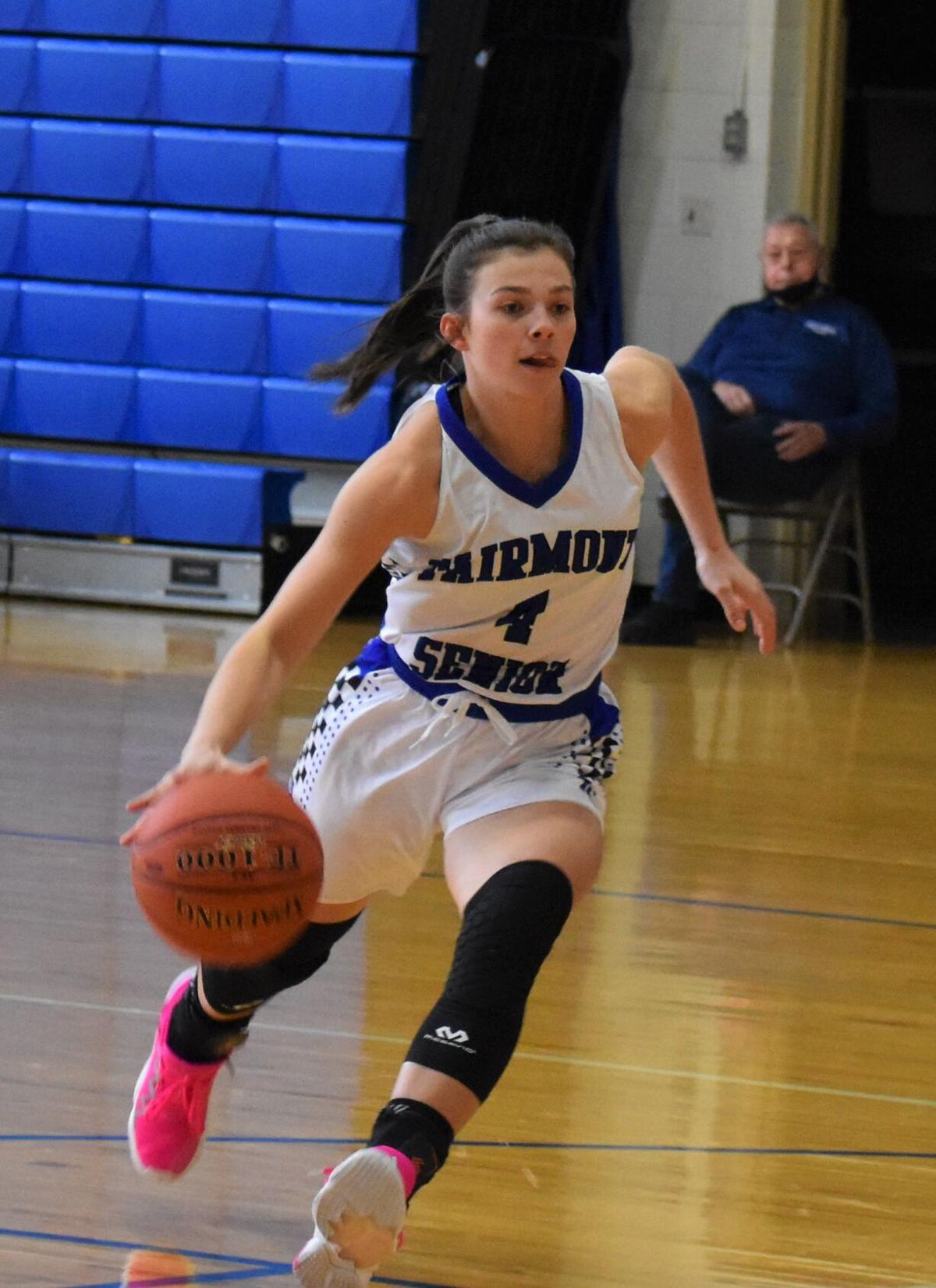 Fairmont Senior’s Emily Starn drives to the basket during a game earlier this season at the FSHS Field House. Starn scored nine points in the Polar Bears’ victory on Wednesday at Lincoln. 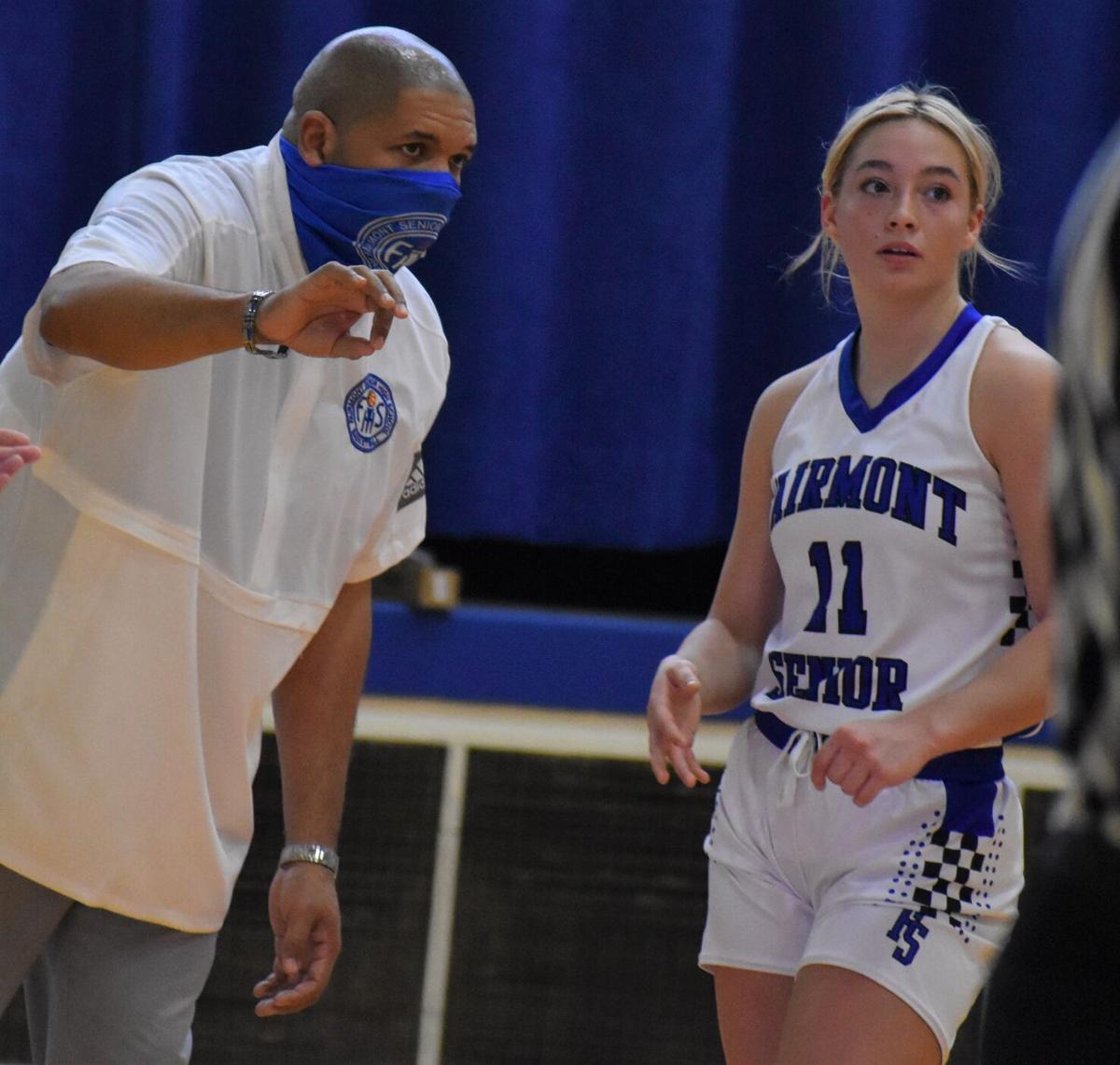 Fairmont Senior's Reagan Blasher shoots a layup in front of Parkersburg's Hayley McCale during a game earlier this season.

Fairmont Senior’s Marley Washenitz shoots over Parkersburg’s Payton Harvey and Riley Hilling during a game earlier this season at the FSHS Field House. Washenitz scored a game-high 22 points in Wednesday’s win over University.

Fairmont Senior’s Emily Starn drives to the basket during a game earlier this season at the FSHS Field House. Starn scored nine points in the Polar Bears’ victory on Wednesday at Lincoln.

FAIRMONT — Handing one of the state’s best teams of 2021 in Wheeling Park its first loss of the season was one thing. But taking down one of the state’s premier recent dynasties in Parkersburg a mere 48 hours later, well, that was something else entirely.

Yet, when Parkersburg sophomore Sierra Mason’s 25-foot heave at the buzzer fell just short on Wednesday night, Class AAA No. 1 Fairmont Senior pulled off that exact double dip of clutch victories, as the Polar Bears followed up Monday’s 70-61 win over Class AAAA No. 2 Wheeling Park with a 66-65 escape over Class AAAA No. 6 Parkersburg.

“Anytime, you come out with a win, I’m going to take it. I wish it was by a little bit more, and I wish our execution was a little bit better, but playing two tough teams back to back, we’re showing that we’re not afraid to step up the competition,” said Fairmont Senior coach Corey Hines.

The victory for the Polar Bears (8-0), which once seemed firmly in hand with Fairmont Senior up 10 with less than four minutes to play, ultimately came down to the thinnest of margins after the Big Reds pieced together a spirited run down the stretch of the fourth to tie the game on three separate occasions in the final 1:15.

With the game knotted for the third and final time in the last minute-plus at 65-65, Fairmont Senior held for the last shot after inbounding with 20.5 seconds left and went into a two-man game between its top two stars in juniors Marley Washenitz and Meredith Maier. Washenitz initially attacked the basket on a drive from the slot, before dishing to a popping Maier when the Big Reds brought help. And while Maier missed the jumper, the inevitably of Washenitz’s competitive fire wouldn’t let Fairmont’s flame die out as she yanked down the offensive rebound out of a crowd and drew a pair of free throws, missing the first but then hitting the go-ahead second.

“It’s a one possession game, and I wanted the win,” said Washenitz, who finished with a game-high 24 points, to go with five rebounds, six assists and nine steals. “At that point in time, Meredith was the one open so I hit her, and her shot didn’t go in, but I was there for the rebound, because with a few seconds left, I was like, ‘I’m going to do whatever it takes. I’m not going to let the other team get it easy,’ so I just went in there and fought for it.”

Washenitz drilled the go-ahead free throw with 1.8 seconds left, but the Big Reds got one final look when a full-court inbound pass by Brilynn Florence deflected off Maier’s finger tips and into the hands of Mason, who immediately flung up a shot from 25 feet that missed just a beat short to preserve the Polar Bears’ undefeated run.

“That last second shot, oh my gosh,” Hines said. “It was on line and looked like it was good.”

“Oh, it was on line,” echoed Parkersburg coach Scott Cozzens.

The end-of-game thrill ride hardly seemed it would even be necessary following what appeared to be a triumphant return to the court out of halftime for the Polar Bears after they took a narrow 27-25 lead into the half. Coming off a first half in which Parkersburg actually fared quite well against Fairmont’s vaunted full-court pressure and bogged down the FSHS half-court offense by loading up out of its 2-3 zone to Washenitz and Maier, the Polar Bears shook loose in the third quarter, opening up a 48-40 lead through three and pushing it up to as many as 10 early in the fourth.

The Polar Bears’ surge was sparked by a switcheroo in the their pressure tactics, as they tucked away their 2-1-2 zone press and unfurled a vicious man-to-man version that directed Big Reds ball handlers into traps along the sideline. PHS coughed up the ball on four straight possessions to start the half, and FSHS eventually found its offensive mojo through an uptick in transition and side-to-side ball movement with keen slashes to the hoop in the half court.

Maier poured in eight points in the period for Fairmont, several off spicy drop-off dimes from Washenitz, and Blasher also swished a timely 3 in the frame.

“We definitely wanted to come out and jump on them with defense, because defense wins games and we’re a defensive team,” said Beresford.

The Polar Bears hiked that margin up to 10 in the early in the fourth, and following a pull-up 3 by Washenitz on a press break, Fairmont still led by double digits at 59-49 with under four minutes to play.

The Big Reds had endured through their bugaboos in digging the 10-point hole — apoplectic half-court turnovers, leaky box outs — but then, in an instant, they roared back like a tsunami. Mason, who played like a full-fledge star slinging skip passes over FSHS’s press, drilling spot-up 3s, and showing some saucy handles on drives to the rim, powered what amounted to a 12-2 run to tie the game at 61-61. She and Florence each drilled 3s during the stretch, while McCale also plucked a steal that led to a Mason transition layup.

“We talked about it after the game, that energy late in the game after we fought all game was encouraging to see,” Cozzens said. “I was proud of the effort and that’s a good building block going forward.”

But in winning time, Washenitz and the Polar Bears did what they live to do, making just enough collective plays in crunch time to come away with the clutch victory.

“We definitely like playing games like this. We like this competition and people who can match our intensity defensively and offensively,” Washenitz said. “Even when they went on their run, we had it in our mind that we weren’t going to lose.”