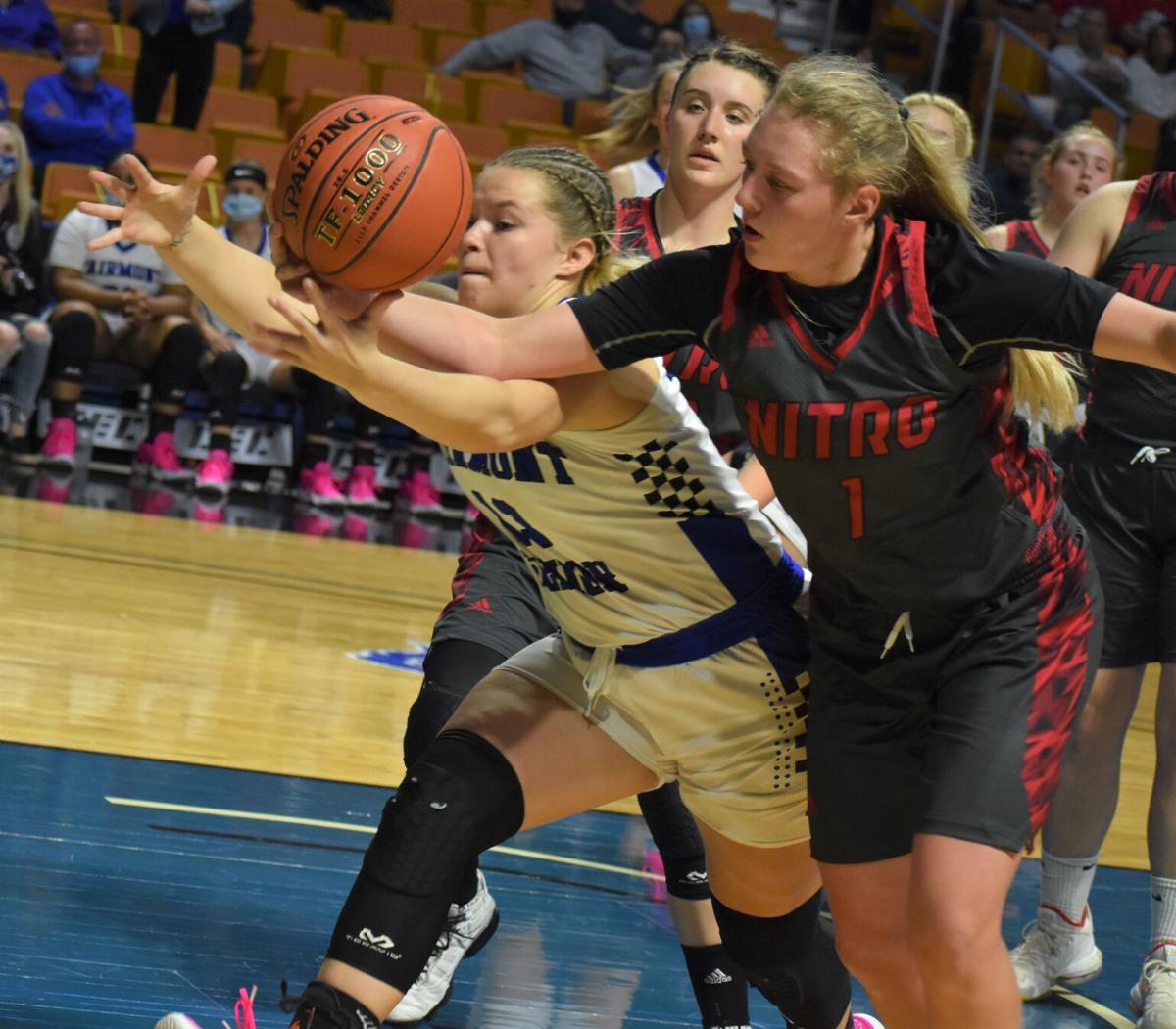 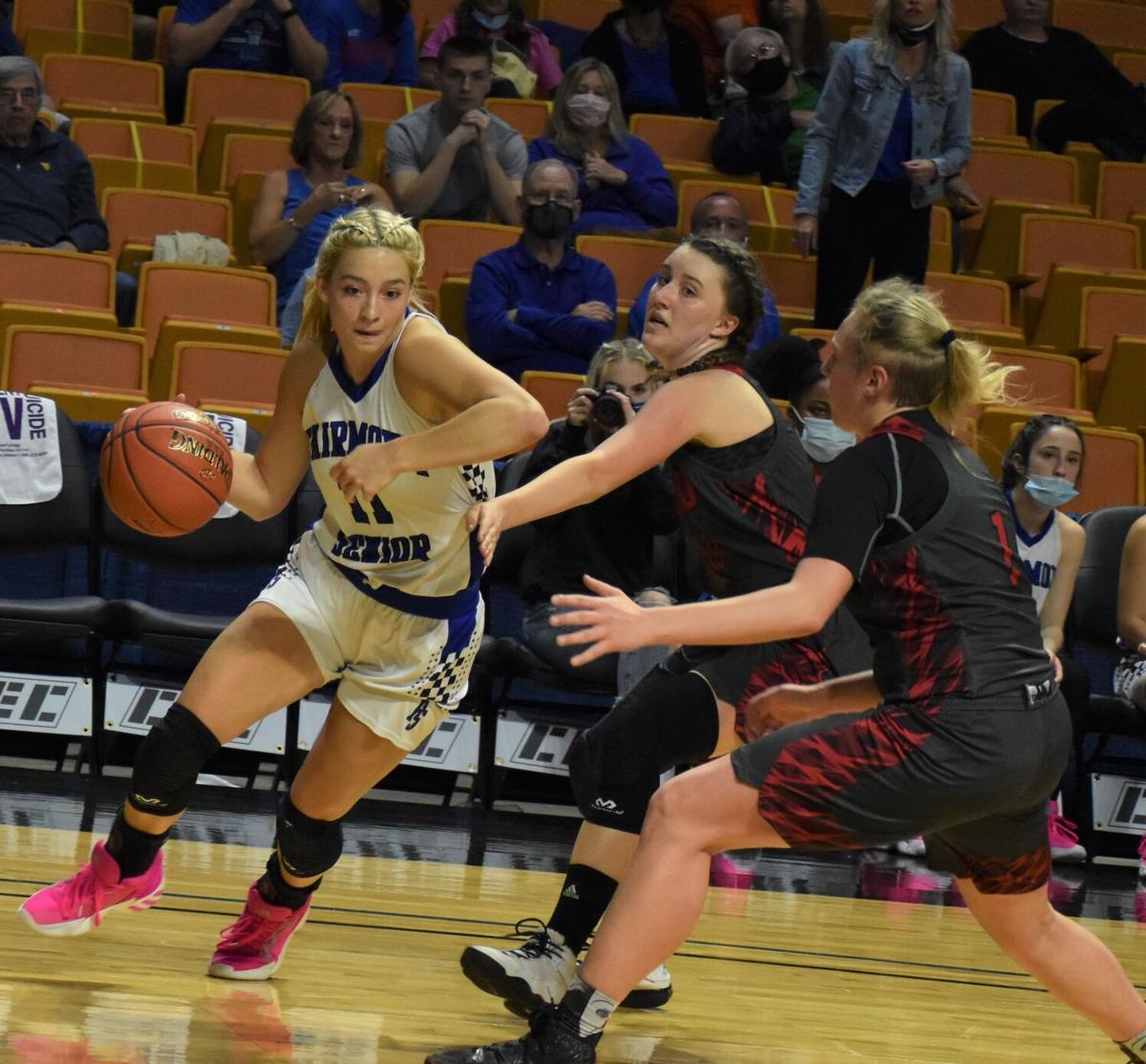 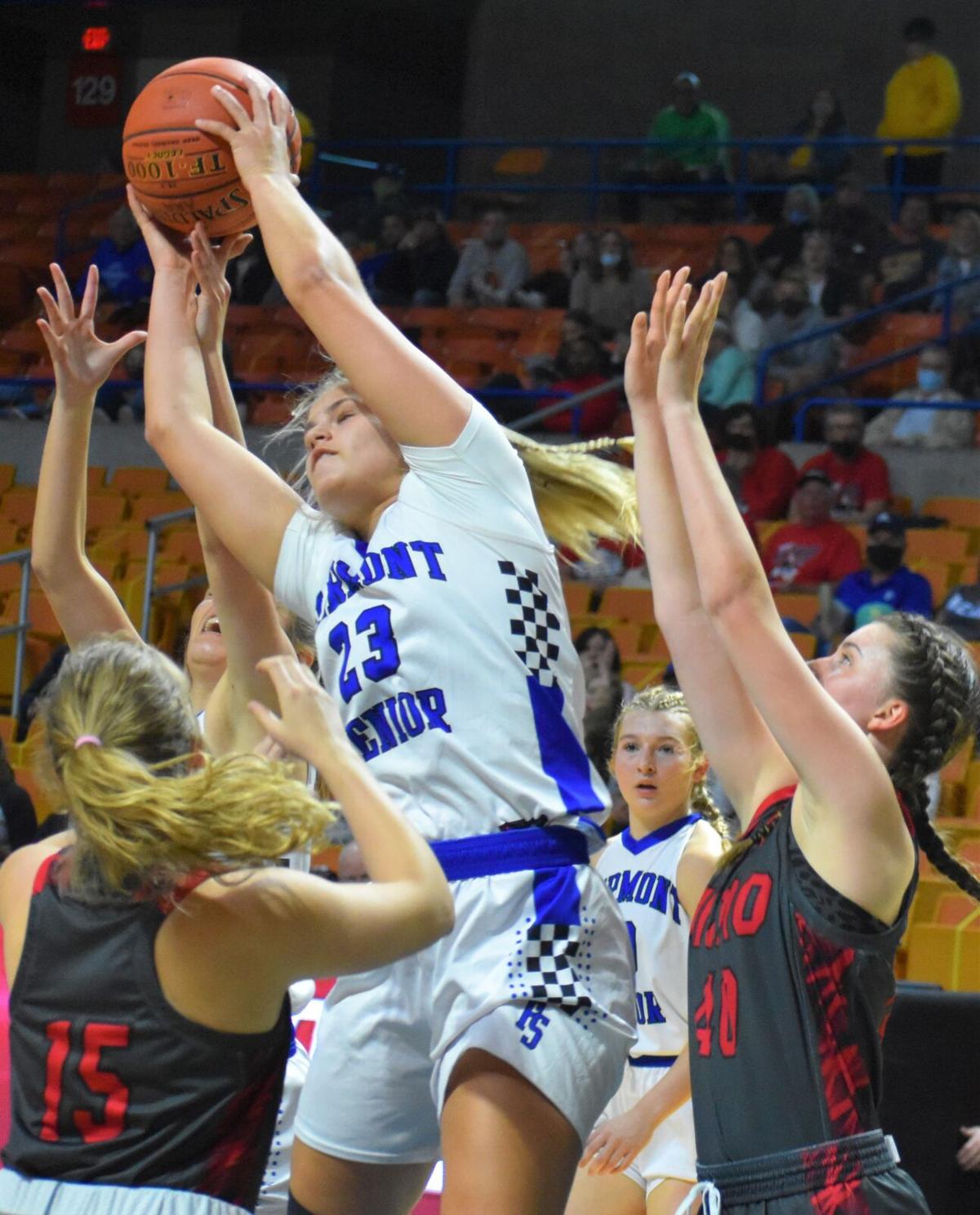 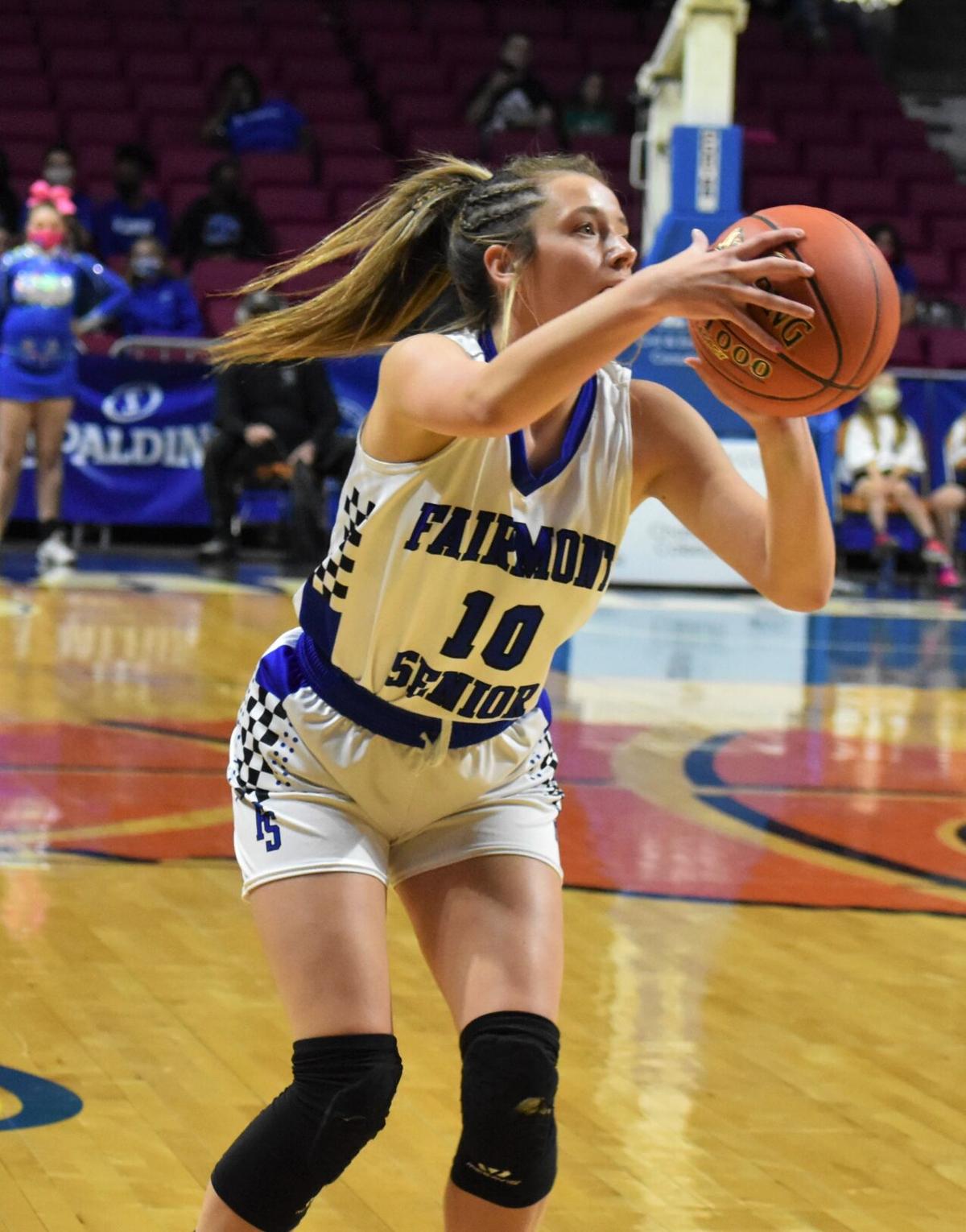 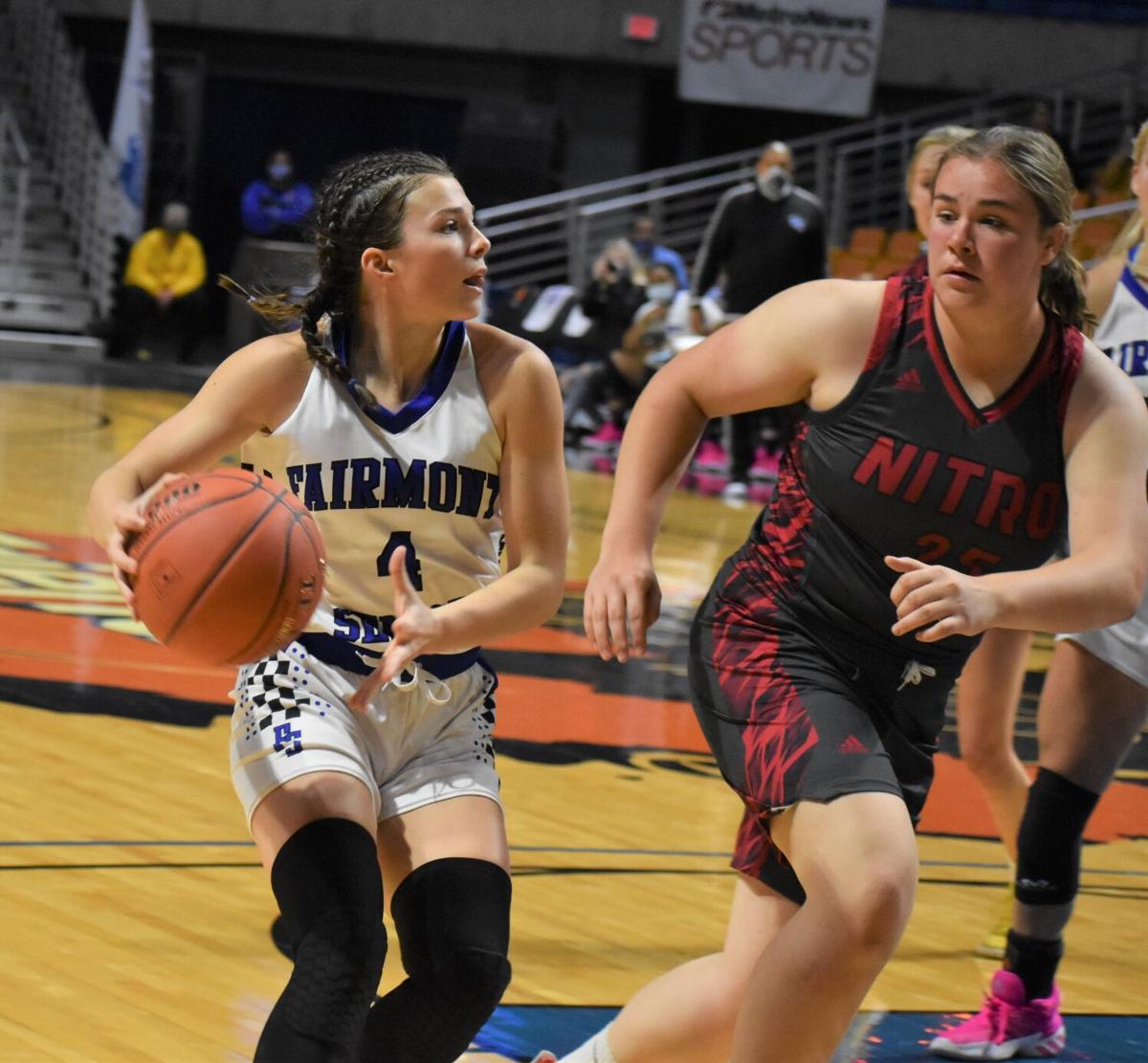 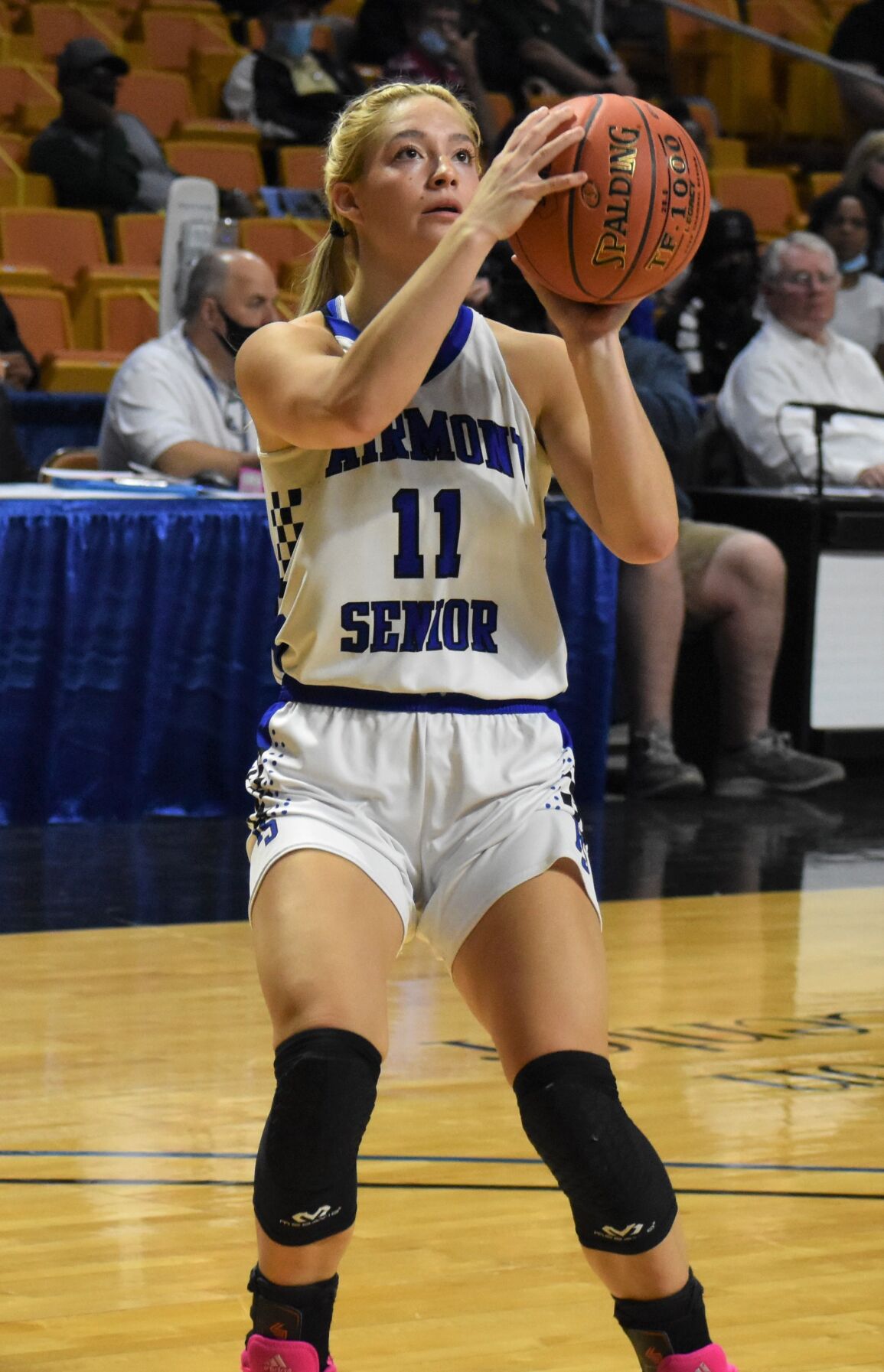 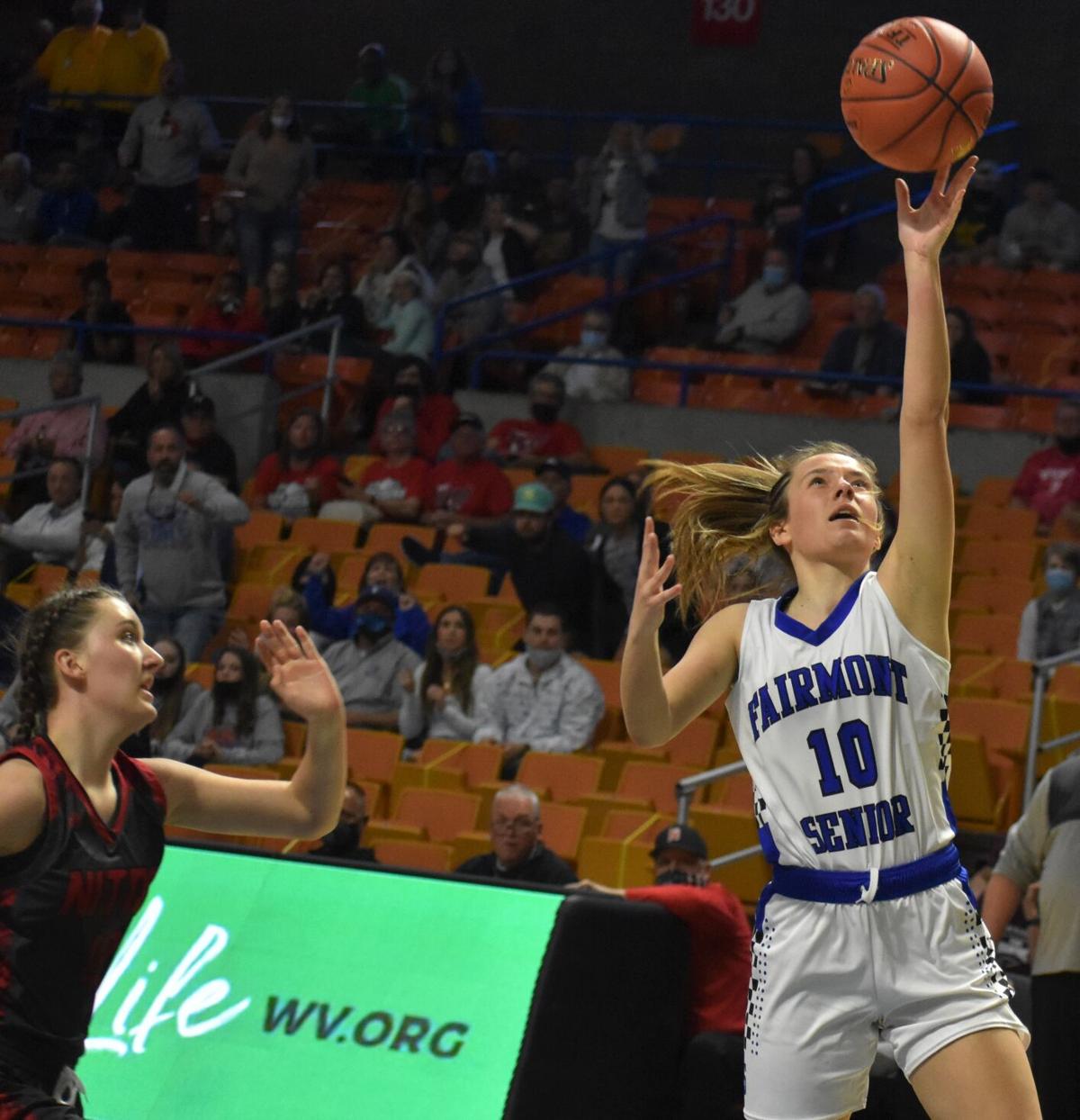 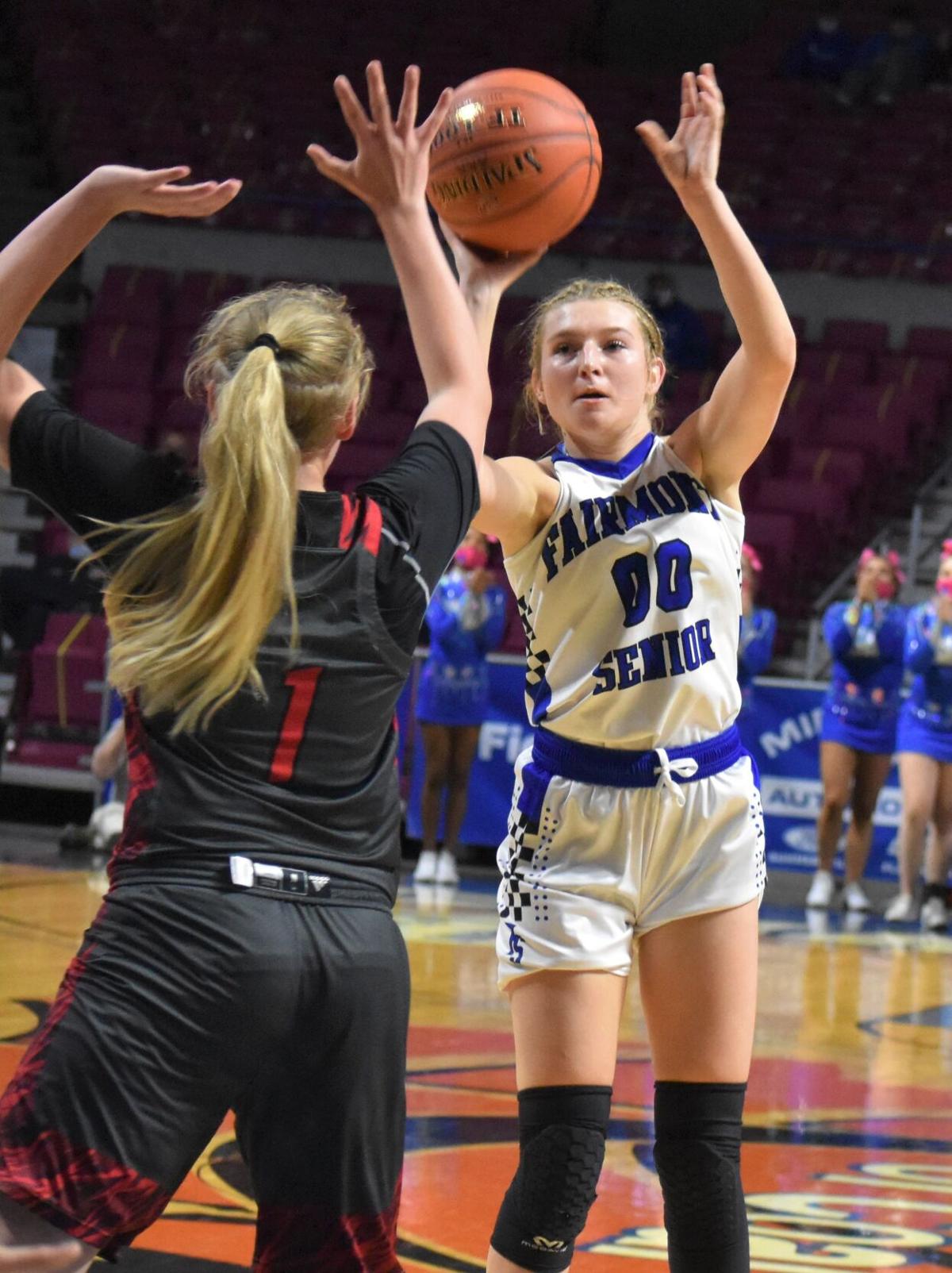 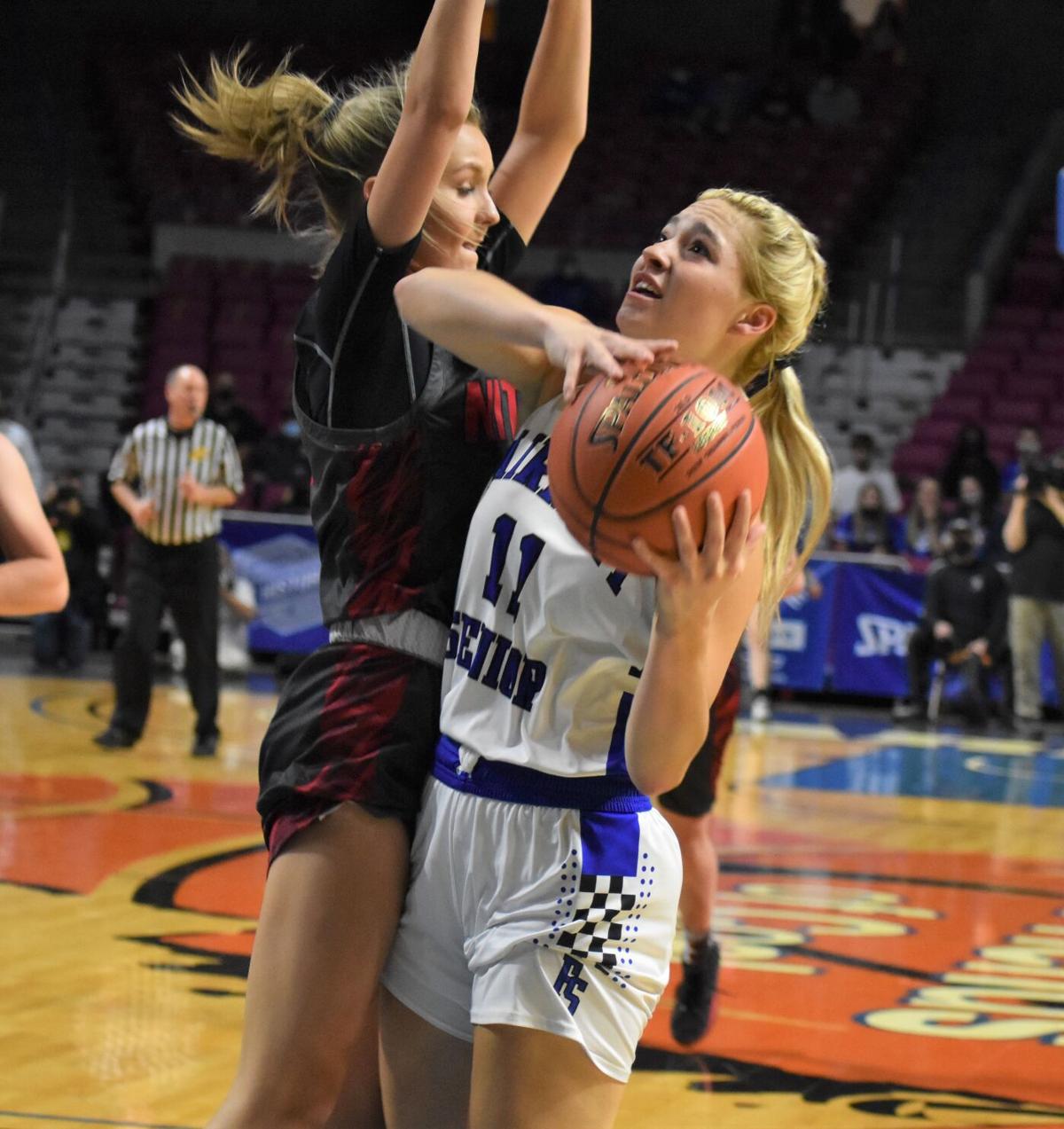 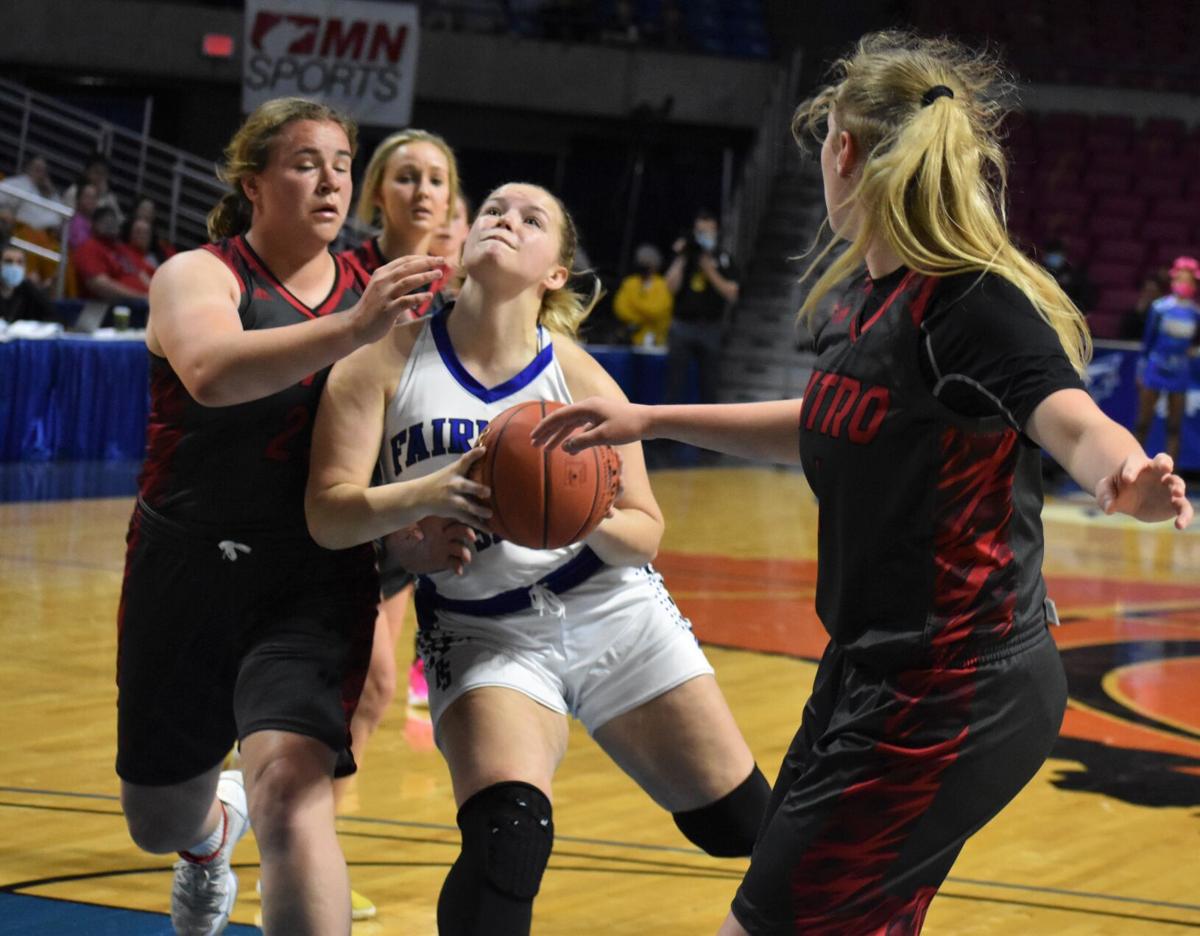 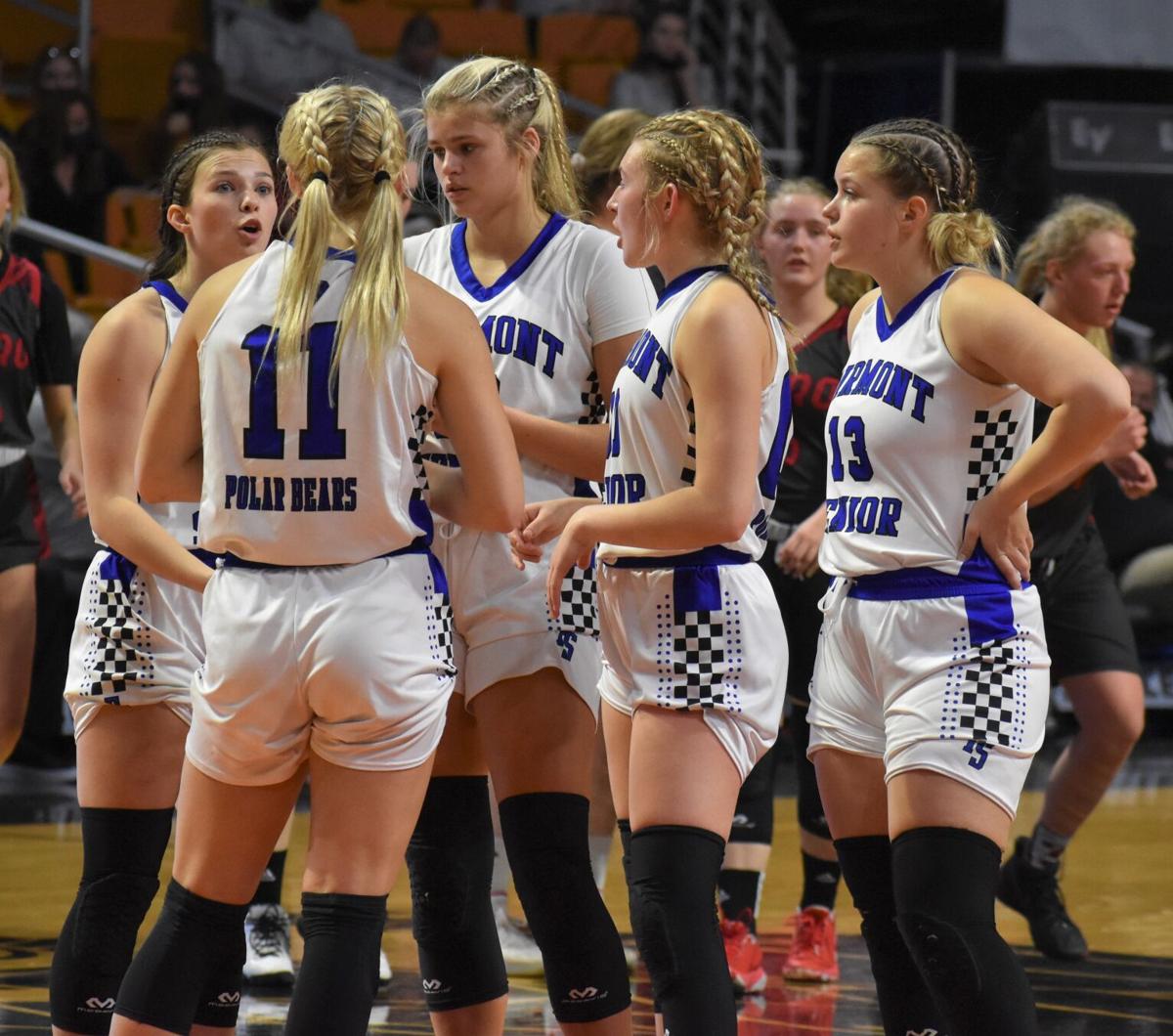 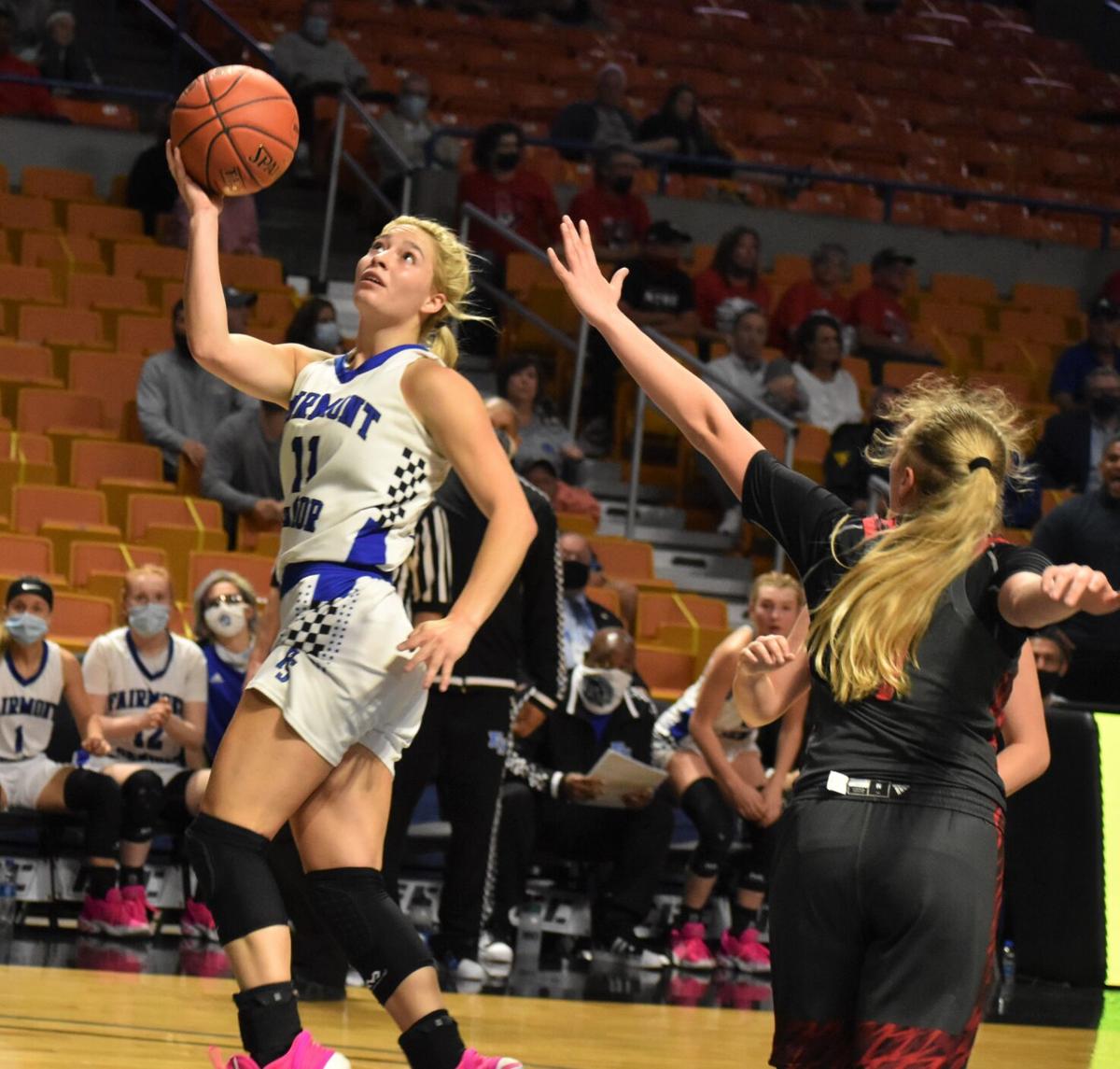 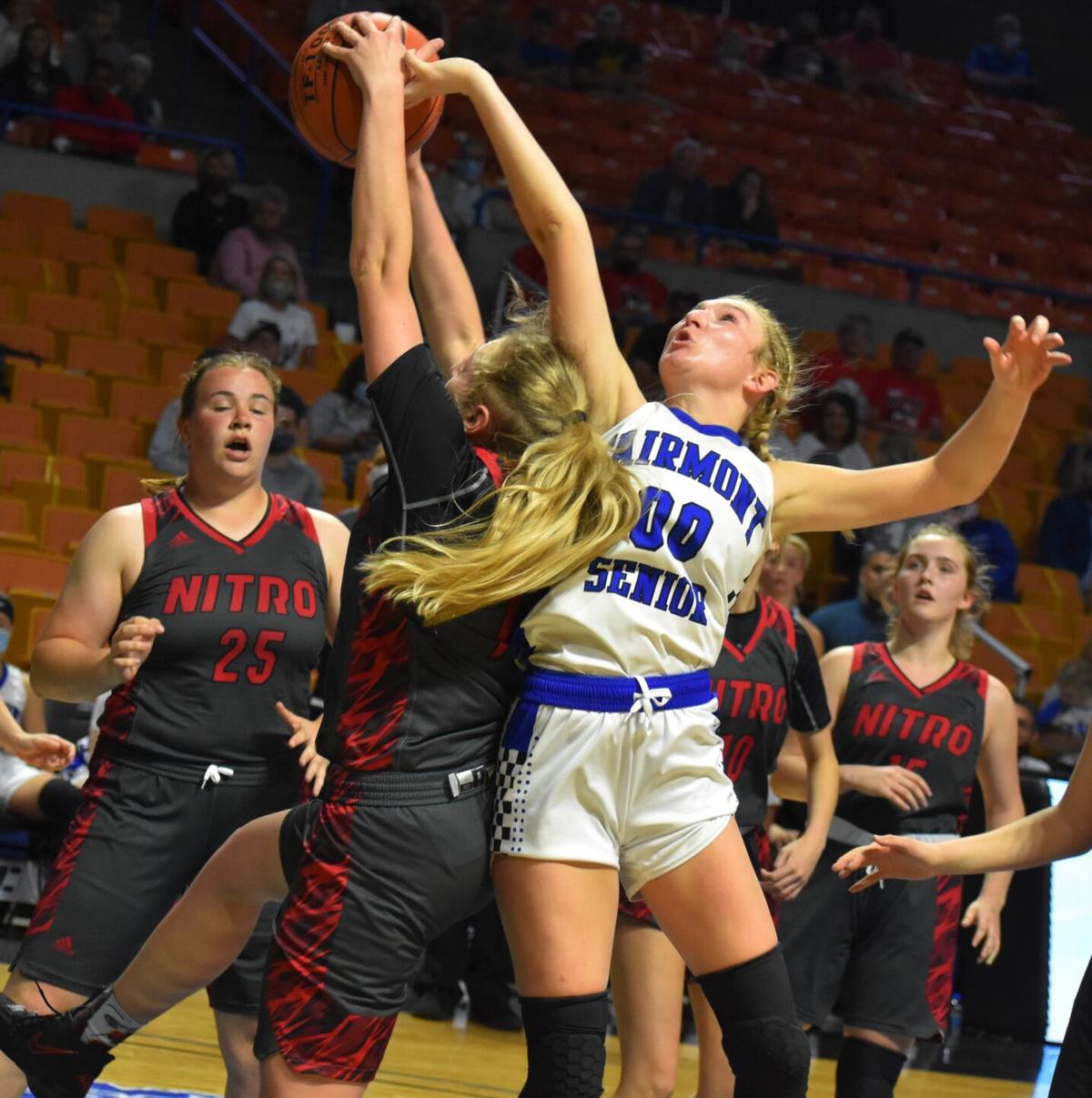 CHARLESTON — It wasn’t the scene anyone envisioned for the closing stretch of the Class AAA state championship game between No. 1 and undefeated Fairmont Senior and No. 3 Nitro on Saturday in Charleston.

The Wildcats’ mega-star senior guard Baylee Goins was hobbling around on crutches after a second-quarter injury, and the Polar Bears’ superstar Marley Washenitz was glued to the bench following a fifth foul with 2:28 left in the game.

Yet, as unpredictable as the circumstances of the game’s final few minutes were, the end result may have been even more so, as the Wildcats, who were without Goins for the game’s final 20-plus minutes, battled and grinded their way to a stunning 51-45 upset victory to win the first state championship in program history.

“I’ve been saying it since Day 1, these girls handle constructive criticism and their fight is unbelievable. They never gave up,” Nitro coach Pat Jones said. “Baylee went down in the beginning of the second quarter, and this team just never gave up. It was an all-around group effort.

Goins, who finished the game with five points and three rebounds, exited the game at about the 4:30 mark of the second quarter when she tumbled to the floor in a heap while leading a fast break and immediately clutched at her knee. Nitro led 18-14 at the time, but the Polar Bears were on an absolute tear having roared back from what was once a 16-1 first-quarter deficit with a 9-0 run.

“Once it initially happened and we got our heads together, we all knew, ‘We’re not giving up. We know we can win this game no matter what,’” Nitro junior guard Danielle Ward said of the Wildcats’ collective response in the wake of Goins’ injury. “We all knew within ourselves that we could still do it without Baylee, because we’ve been practicing and we’ve been preparing. She does a lot, and she makes it a lot easier out there on the court, but we all have our parts we can still contribute to win a game.”

The path to the finish line and an all-time upset for the breakthrough state title wasn’t necessarily a smooth nor straight journey for the Wildcats, as they immediately relinquished the lead at 20-18 and went into halftime trailing 22-20. They fell behind by a bucket again early in the third quarter at 24-22 and finished with deficits in both the turnover department (28-17) and the rebounding battle (45-38). But, even in spite of all those hiccups and even in the face of so much adversity, the Wildcats still had enough to deliver in winning time as they finished the game on a 13-7 run over the final four minutes to break what was a 38-38 tie with 4:02 left in the game.

“First of all we want to say a prayer for Baylee,” Fairmont Senior coach Corey Hines said, “and I was really impressed with the way their team stepped up after she went down. And I thought we started to press a little bit, because we were starting to fight against the clock.”

The winning stretch, and overall effort, for Nitro was a confluence of clutch plays and gritty efforts from across the roster, chiefly by sophomore guard Taylor Maddox. Maddox, who finished as the leading scorer of the entire Class AAA state tournament, emerged as the life force of the Wildcats, the pulse of its offense and the general of its title pursuit. She finished the game with a team-high 17 points on 6-of-10 shooting, and she also recorded three rebounds, three assists and five steals.

”We worked and did all of this just for Baylee, and we all earned and deserved it,” said Maddox, who turned the tide of the game with momentous back-to-back 3s to start the fourth quarter to extend Nitro’s lead out to 38-31 with 5:56 to play. “I mean, it’s not just me out there, it’s also my teammates. We just worked together and we knew we could do it.”

Fairmont Senior’s championship DNA summoned one final surge in the fourth despite a completely off-kilter day for the Polar Bears that included 17 turnovers and a mind-boggling 17-of-74 (23%) shooting performance versus Nitro’s 3-2 zone.

With Washenitz still kicking it both ways full-throttle, co-star Meredith Maier had a five-course meal worth of rebounds, and Emily Starn, Laynie Beresford, Bekah Jenkins and Reagan Blasher turned up the defensive heat, Fairmont stitched together a 7-0 spurt to tie the game at 38-38 with 4:02 to play following a cold-blooded corner 3 by Blasher.

“About the heat of the moment, I’d say it felt like every other game, just with other people there, and I thought, personally we had it in the bag,” said Maier, who finished the game with a whopping 22 rebounds, to go with eight points, three assists and three steals. “But coming down to the last few seconds of the game, I kind of realized we weren’t going to win, which was a little disheartening.”

With Fairmont Senior steadily climbing back, though, Nitro reserve forward Lena Elkins quelled both the Polar Bears’ run, and ultimately a historic undefeated season, with a huge pair of back-to-back putbacks, the first of which was an and-one, to give the Wildcats a 43-40 lead.

Then, as if Fairmont needed an additional gut punch on a day when everything it put up seemed to clang off the rim, Washenitz fouled out moments later and Ward made a pair of free throws to make it a five-point game at 45-40 with 2:28 to play.

“Fouling out with two minutes left really hurt. It doesn’t seem like there’s that much time left, but it’s a lot of time to me — a lot can go on in two minutes,” said Washenitz, who finished with a team-high 11 points on 5-of-26 shooting, to go with nine rebounds, four assists and four steals. “I feel like it also kind of affected our team a little bit, because we’ve never really had to deal with a tight situation with me out of the game.”

A wing 3 by Jenkins at the 2:12 mark got Fairmont Senior back within a bucket at 45-42, but a free throw by Elkins and a contested fast break finish by Brooklyn Bowen following a Maddox steal kept the Polar Bears at bay to cinch championship for the Wildcats.

”They made plays, and we didn’t. We just didn’t make the plays,” Hines said.

Along with Maddox’s 17 points, Elkins was the lone other Nitro player to finish in double figures with 10 points on 4-of-4 shooting to go with four rebounds. Ward added another six points and five rebounds, and Bowen grabbed a team-high 10 rebounds to go with five points, as Nitro finished the game 18-of-39 (46.2%) from the floor and 11-of-16 from the foul line.

For Fairmont Senior, Washenitz and Maier posted their aforementioned team-highs of 11 points and 22 rebounds, respectively, and the Polar Bears also got 10 points from Blasher off the bench and six points, nine steals and three assists from Starn.

As a team, the Polar Bears were their usual relentless selves on on the offensive glass with 30 offensive rebounds and in their pressure defense, forcing 28 turnovers, but neither could offset the icy 23% shooting, which included 3-of-17 from deep.

”At the end of the day, they only took 39 shots and we took 79 — let’s just do the math, we had a lot more opportunities — but they just didn’t go in. And that’s going to happen in this game, if you’re around it long enough, it’s going to happen,” Hines said. “It’s like I tell them all of the time, the toughest person guarding you is usually yourself, so when you start applying pressure to yourself, that’s the toughest defense you’re ever going to face.”

The title game loss spoiled both Fairmont Senior’s bid for its fourth-ever state championship and its first-ever undefeated season.

”It happens. Like I tell these ladies, it’s a basketball game at the end of the day — you’re going to win some and you’re going to lose some,” Hine said, “but if you let your life be judged by what you do on the basketball court, then you’re not living a good life.”

For a longer version of this story, log on to timeswv.com.