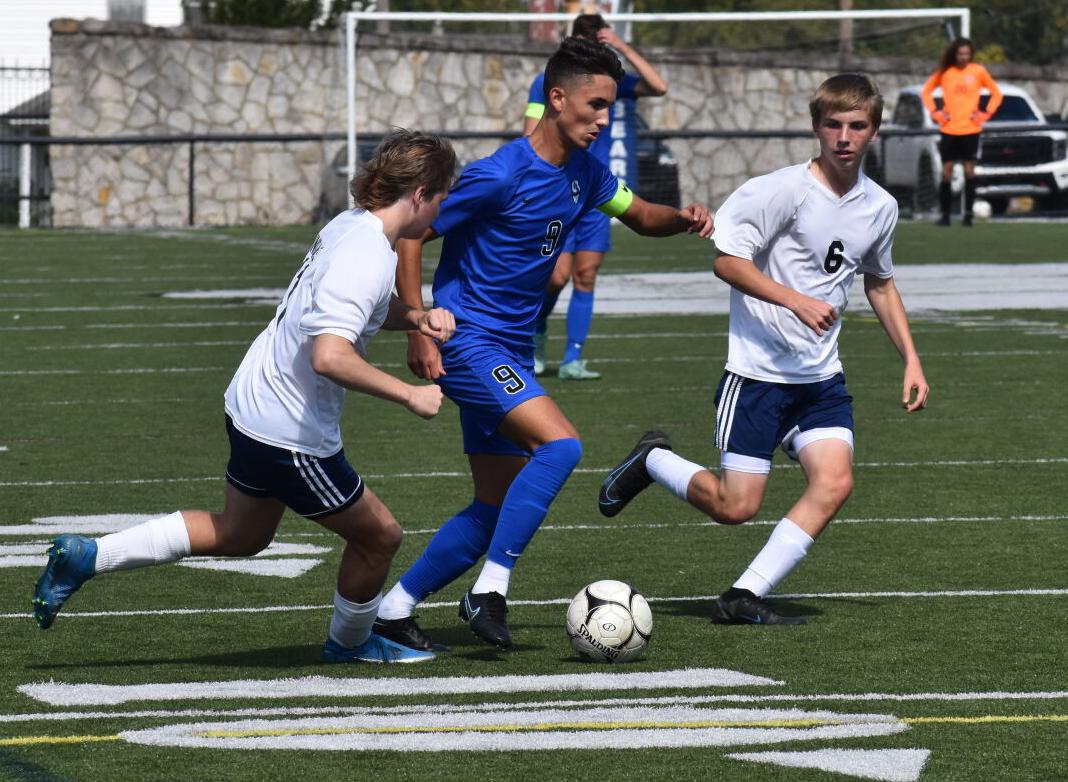 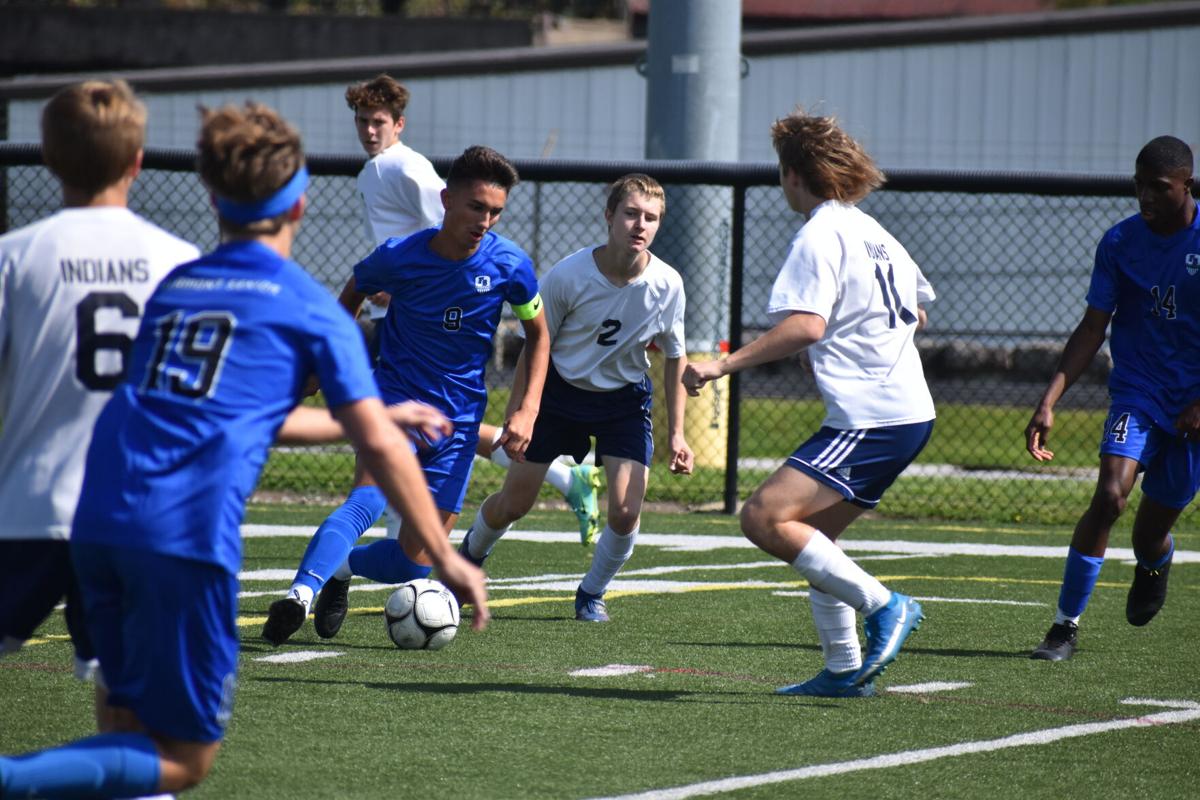 The goal, a first-half penalty kick, brought Towns to 126 goals, one more than the previous record holder and current WVU soccer star, Ike Swiger. Towns scored again later in the contest, bringing his current total to 127 as of Wednesday, Oct. 13.

The Polar Bears have had a lot to celebrate over the last few days, with their senior forward tying the record on Saturday and breaking it on Tuesday.

“When he came over at halftime after he made the goal, I just said ‘Hey, congratulations, quite an achievement,’” Fairmont Senior head coach Darrin Paul said. “Proud of him, that was one of the individual goals he set at the beginning of the season. We knew he was definitely within range of breaking Ike Swiger’s career goals record at the school, just because of how many goals he’d scored coming into the season.”

“The funny thing was, at halftime, he acknowledged it, said thanks, but he wanted to concentrate on the second half, make sure we got the win and that we became Big 10 champs. That’s the kind of teammate he is. He puts the team first, a great leader, leads by example, he pushes himself to be better all the time and he pushes all the guys to be better.”

“Everyone around me showed me nothing but love,” Towns said of Tuesday’s record-breaking game. “They all want what’s best for me, so they love to see me succeeding. There’s no better feeling than that, and I’m blessed to have that environment around me.”

Towns’ two-goal showing Tuesday brought his season total to 30 — sixth-most in the state — to go along with 18 assists. His 78 total points scored this season places him third in the state. The senior has been a crucial piece of the Polar Bears’ season, as the team looks to put forward another good postseason showing after winning back-to-back state titles. Yet despite making waves with his goal-scoring acumen, Towns’ other attributes have been just as important to his team.

“The thing I like about Bubby, sometimes people view goal scorers as selfish, he is one of the most unselfish players you’ll meet,” Paul said. “He is all about the team. His goal was to win the game, have success for the team, and if he broke the record in the process then he was fine with that.”

“Bubby is one of the best defenders that no one knows about because he plays a forward position. There have been times over the last two and a half years where if we’re in a bind, if a defender goes down with an injury, or if we’re late in a game and we’re trying to salt away a game I’ll drop him back to a defensive mid position or even a center back defender position. And he does just as well as some of the best defenders in the state.”

“I’m sometimes a pass-first player, believe it or not,” Towns said. “I love to set my teammates up and I love to see the happiness on their face whenever they score.”

Towns has been around the Polar Bears program most of his life. His older sister, Avery Towns, was an all-state performer at Fairmont Senior, and his father, Bryan Towns, formerly coached the girl’s team at the school.

“You knew he was going to be something special from a young age,” Paul said. “The biggest thing with him was his work ethic. He was always around the game, he loves the game and he was always trying to get better.”

And as he progressed through high school, that work ethic drove him to only grow as a player.

“He’s always had that goal-scorer mentality,” Paul said. “The biggest thing I’ve noticed with Bub when he came in as a freshman he would try to take a guy on, or two guys on. He realized pretty early, pretty much from his freshman to sophomore year, he got more guys involved, specifically like Jonas and Isaac Branch the last two years. That’s made his game soar. And he’s got the same bond this year with somebody like Kaelen Armstrong, those two guys play the two-man game very, very well.”

“I’ve developed more of a leadership role,” Towns said. “Coming into my freshman year I had somewhat of a leadership role because they knew what I could do and what I was capable of. But as I have gotten older, my voice has become a lot bigger on the team. I’ve been developing a lot mentally because I believe mentally is really where you’re going to succeed. If you go into things with a bad mindset, nothing good will ever come from that.”

Towns’ production has been prolific throughout his career, as you’d expect from someone at the top of their schools’ career scoring charts. Scoring 30 goals this year after putting up 44 a year before, Towns has moved past several players who have gone on to compete at the next level.

“As long as I’ve been at Fairmont since 2003, we’ve been blessed to have a number of great players come through,” Paul said. “The one thing I can say is he portrays all the same characteristics that a lot of our great players have had. [...] The biggest one — we put a lot on the shoulders of our top players, and he has that knack to know when he needs to take the game over. The same things I saw from Jonas Branch, Ike Swiger, Brooks Nucilli, those three guys won the state player of the year for the state of West Virginia and Bubby is definitely in that same class.”

“He is definitely in the top three, top four players in the history of this school. And he is definitely the best player in the state of West Virginia this year.”

“I am honored to be in the same category as those players who have come through here,” Towns said. “But to be honest, how I see it, I deserve to be up there. And with all the work I’ve been putting in, it’s all shown that I can compete with those players who have put up those numbers. The record that I beat was from my good friend Ike Swiger. He was showing me nothing but love after I broke it.”

How much time will Towns give himself to celebrate his achievement? With the regular season all but wrapped up and Fairmont Senior’s title defense on the horizon, not long.

“I think that all of my personal goals are dealt with, they’re out of the way. That’s kind of a big relief,” Towns said.