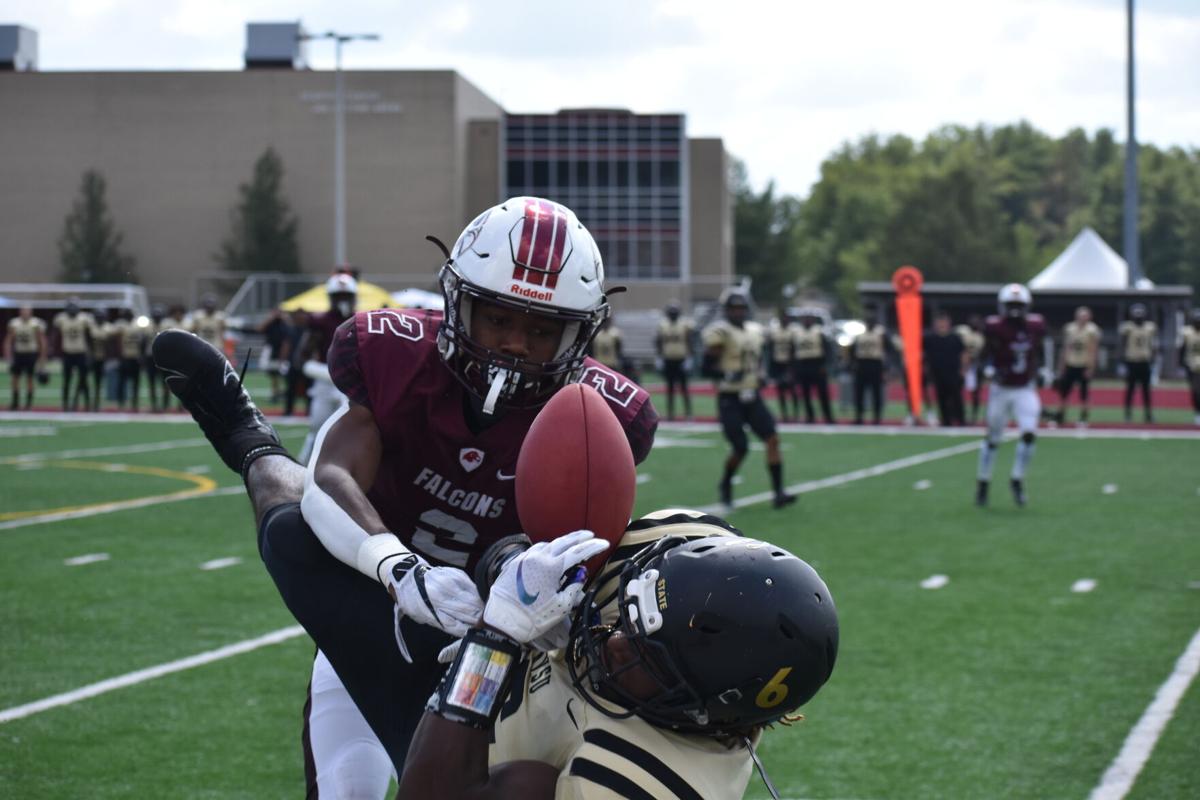 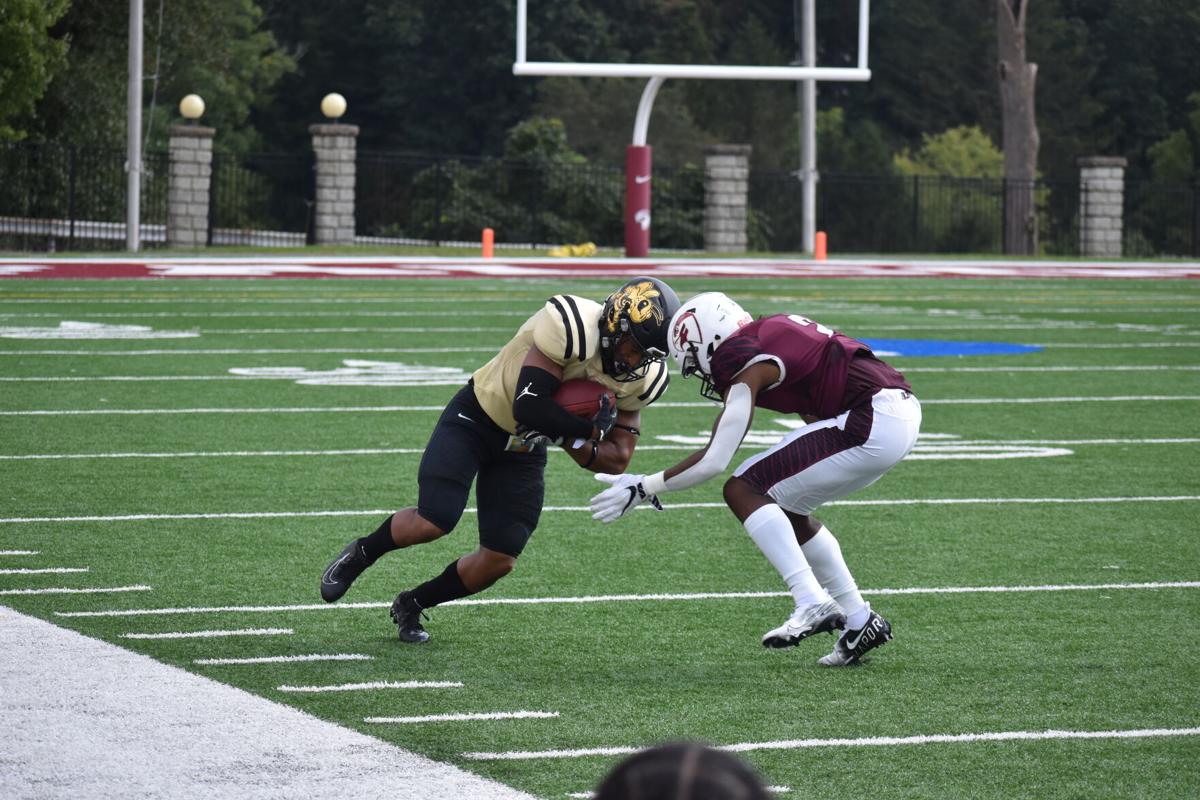 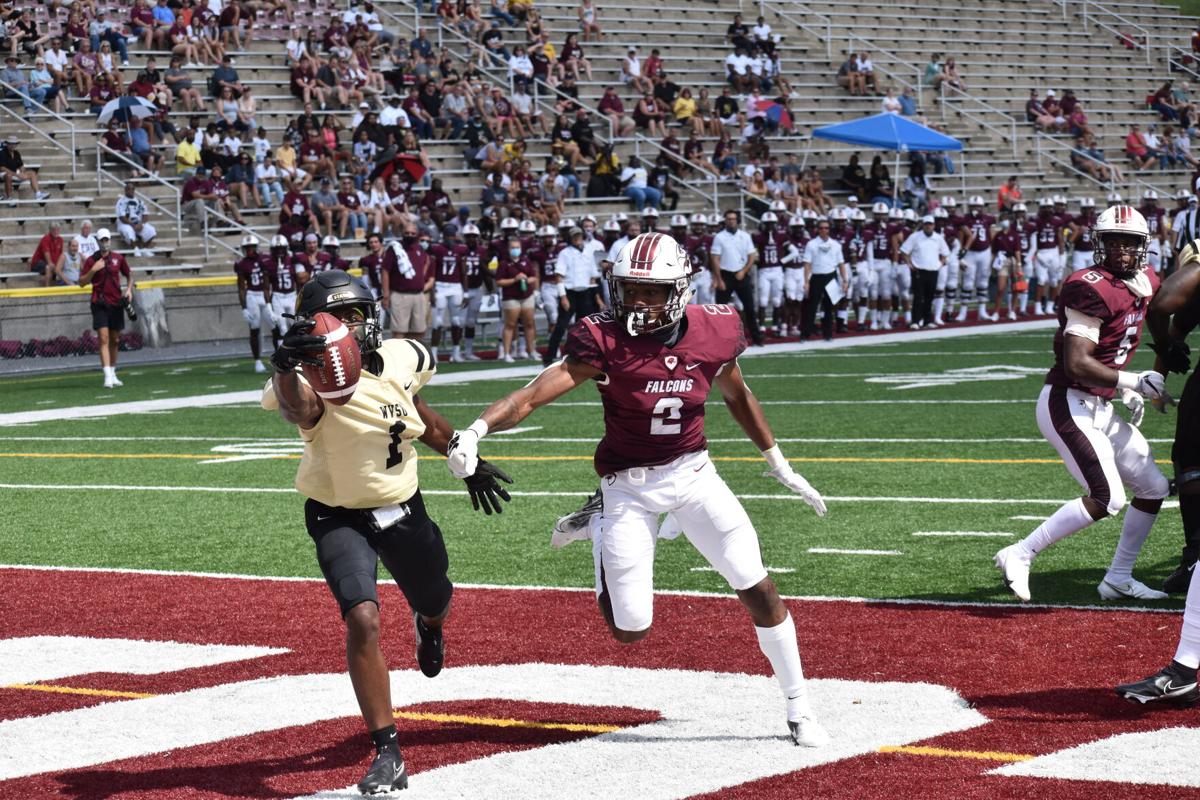 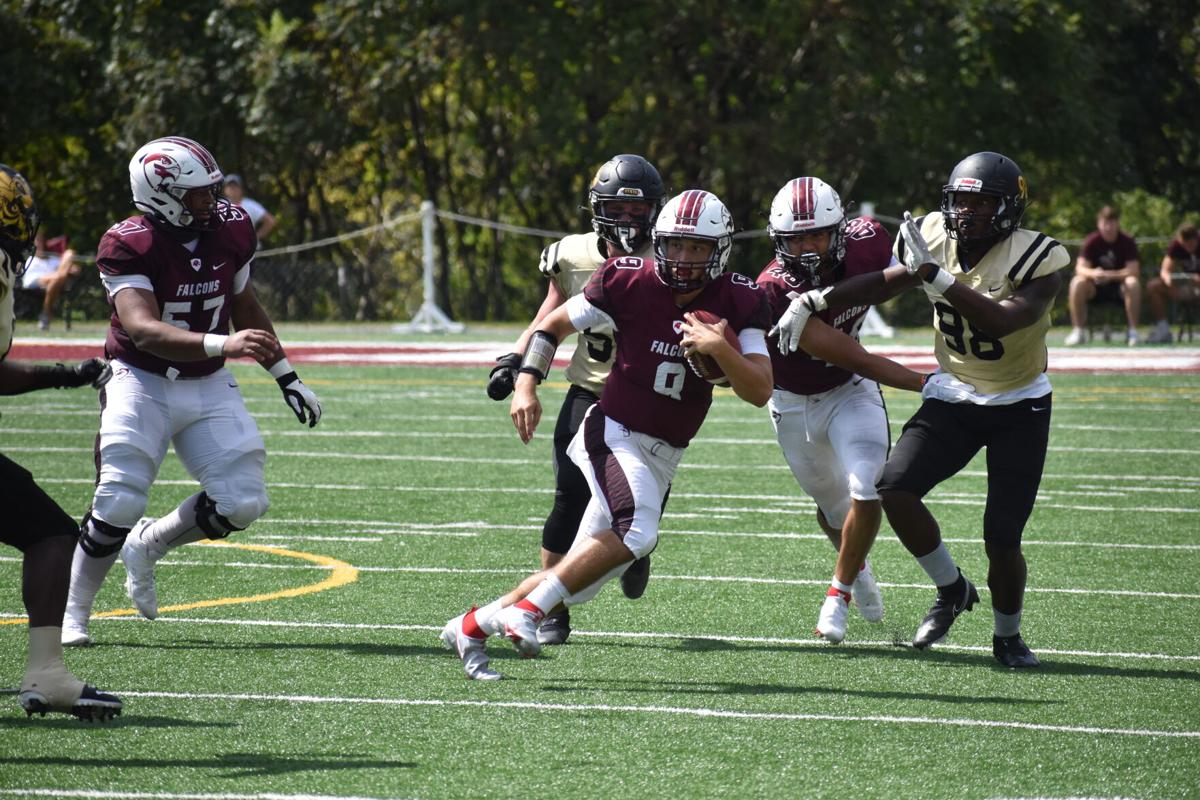 Fairmont State's Connor Neal scrambles out of the pocket. 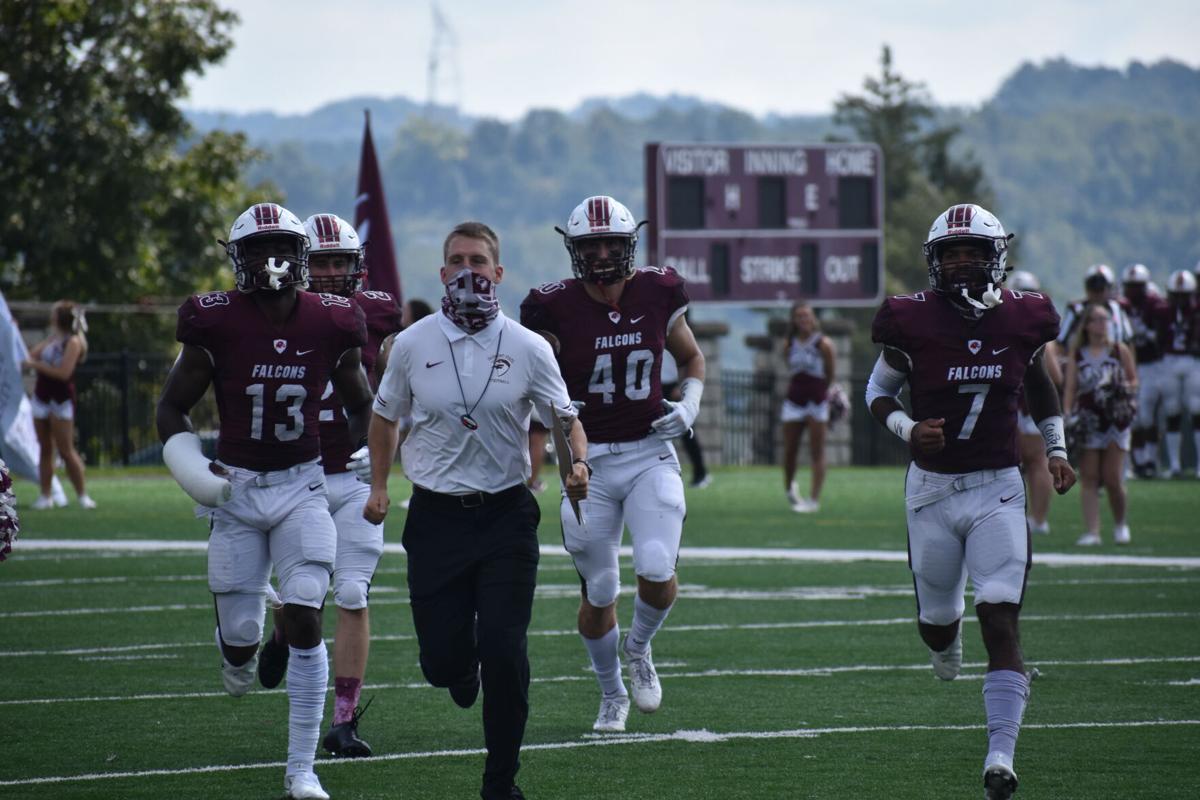 The Fairmont State Falcons jog onto the field. 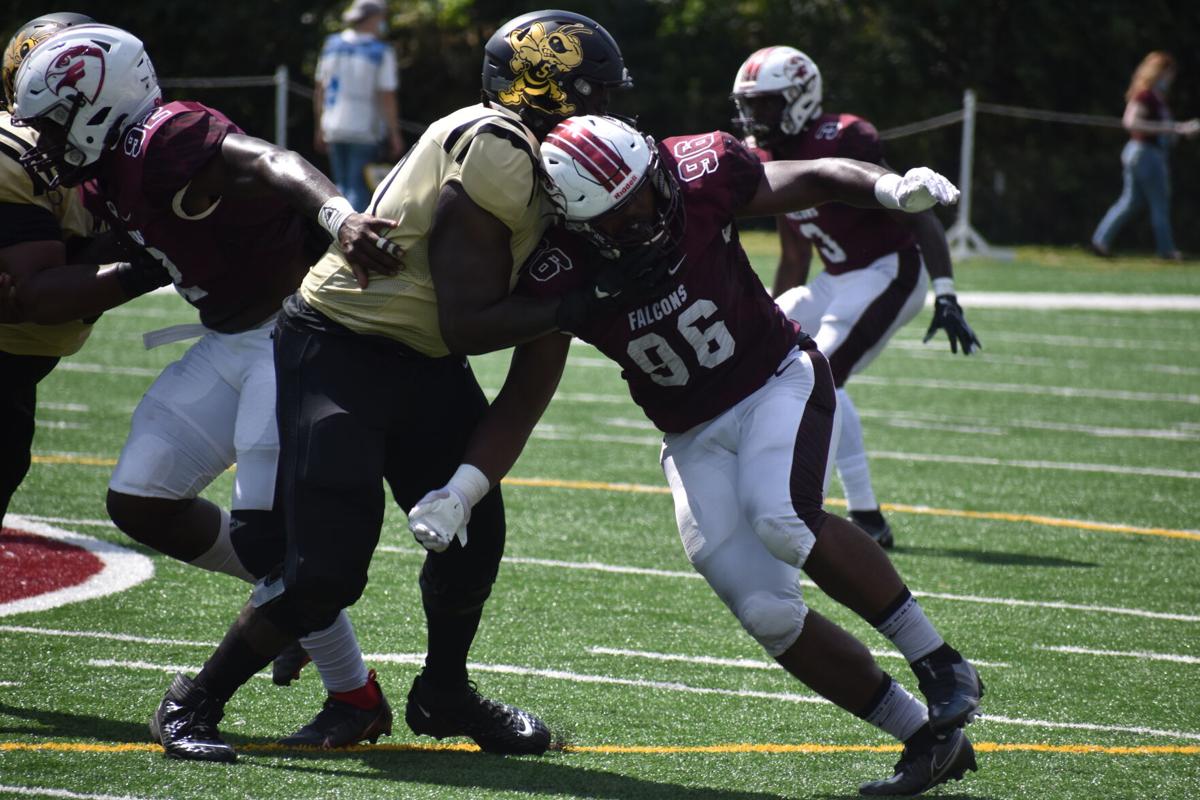 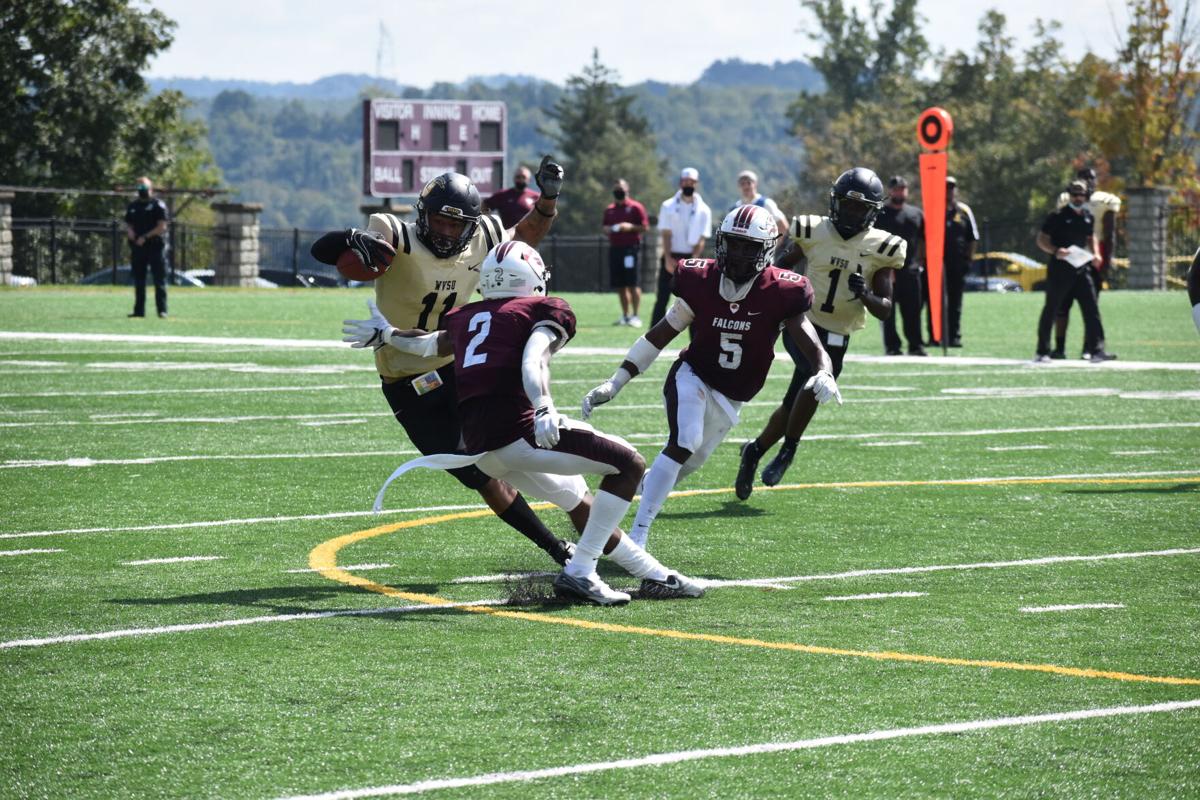 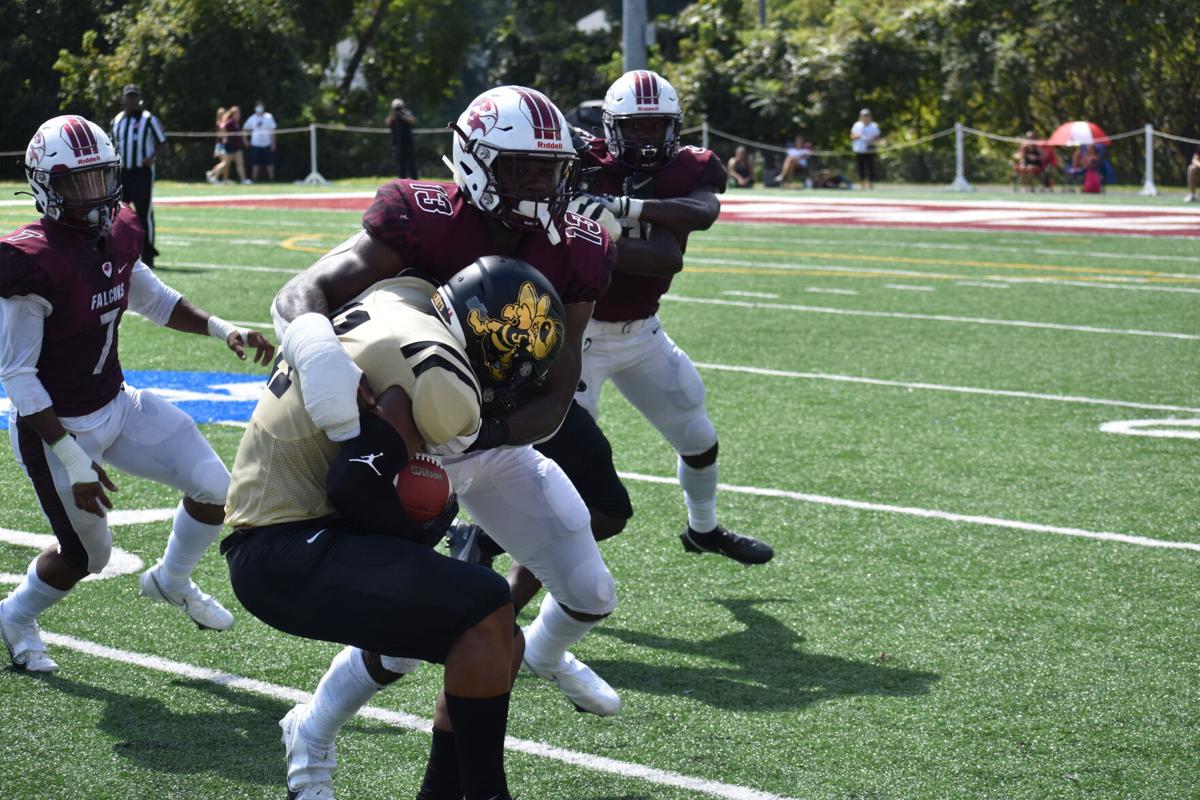 Fairmont State's Danny Anige wraps up for the tackle. 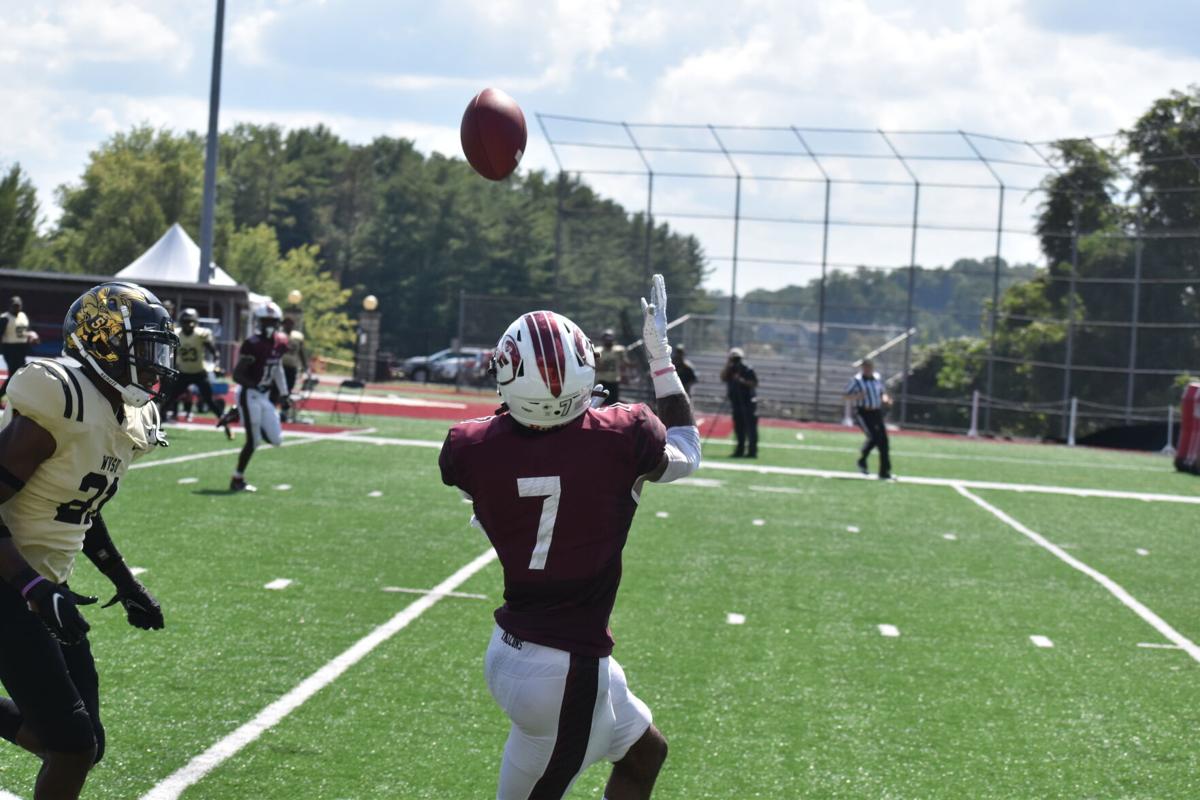 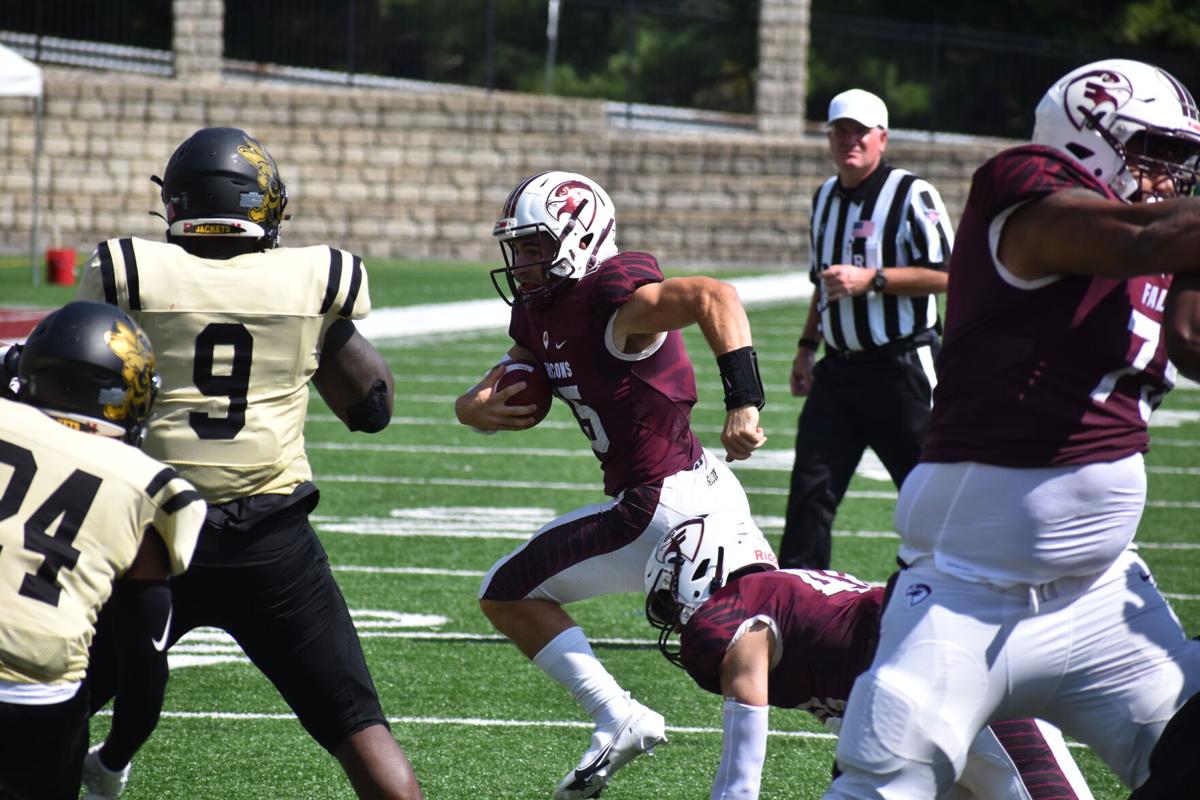 Fairmont State’s Anthony Guercio runs to the outside. 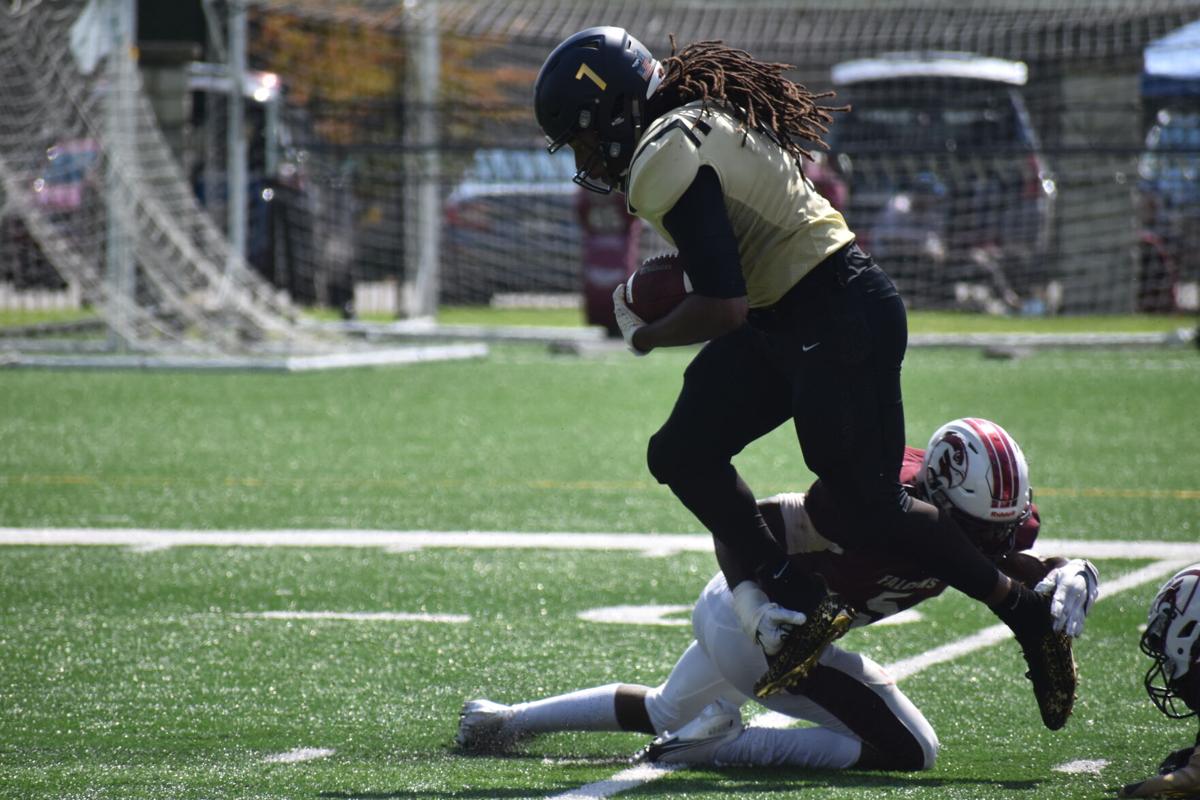 Fairmont State's Connor Neal scrambles out of the pocket.

The Fairmont State Falcons jog onto the field.

Fairmont State's Danny Anige wraps up for the tackle.

Fairmont State’s Anthony Guercio runs to the outside.

FAIRMONT — After the first 30 minutes of play, it’s fair to say the Fairmont State Falcons were struggling. Struggling with their opponents, the West Virginia State Yellow Jackets, but perhaps just as much struggling with the uncharacteristic mid-September heat that sidelined players from both sides and even an official for a time.

Trailing 23-to-3 at half, the Falcons heated up at Duvall-Rosier field as the temperature cooled. Though they outscored the Yellow Jackets 20-to-7 in the second half, it was not enough to pull out an improbable victory, and the Falcons fell 30-to-23.

West Virginia State started off strong, putting together an eight play, three minute drive that culminated in an impressive one-handed grab by Barry Hill for a two-yard touchdown.

As for Fairmont State’s own defense, the Falcons got very little from the run game early on, failing to get push up the middle. On the game, Fairmont State would finish with 70 rushing yards, opposed to West Virginia State’s 282. An eventual turnover on downs would give the Yellow Jackets the ball around midfield.

The Yellow Jackets would get more points on the board with 4:29 to go in quarter one, on a unique play where the quarterback Donovan Riddick went in motion out wide, and the ball was direct snapped to Dant’e Jones. Jones finished with 89 yards on 18 carries and a touchdown to go along with two catches for 18 yards.

West Virginia States’ massive day on the ground came largely off the work of Jones and Malik Newton, who rushed 27 times for 182 yards and a touchdown. The Yellow Jackets went to inside trap early and often, and though Fairmont State would hold strong on the interior for stretches, West Virginia was persistent, and wore down the defensive front.

Also aiding in wearing down the defensive front was the heat radiating off the turf in the first half, sending players from both sides to the medical tents, and at it’s worst point, forcing an official off the field for a few minutes of play as well.

Perhaps bogged down by the temperature, the second quarter did not see any touchdowns, but a preponderance of of Martin Ahlstroem nailed three field goals in the quarter, while Colin Harvath got the Falcons on the board with one of his own.

Fairmont State had a great chance to garner momentum going into halftime, as Danny Anige brought in an interception with 1:40 to go in the half, but that opportunity was quashed via a Cody Stanley sack on Connor Neal.

West Virginia State then were able to speed down the field thanks to two impact plays from Luke Gadson. Gadson drew a pass interference call on a deep pass to bring the ball to the Fairmont 49, then reeled in a 39-yard catch to put the Yellow Jackets in field goal range. Ahlstroem would drill his third field goal of the half with a second to spare before the buzzer.

The reversal of fortunes for the two teams started with just under ten minutes left in the third quarter.

West Virginia State once again tried to pull off a little deception in the red zone. In a wing-t formation, the quarterback took the snap, and he and the back to his left took off as if running a speed option. However, after a few strides, the quarterback shovel-passed it to the back on his right, who had blocker set up in front of him. Dant’e Jones took the ball for a first down, but this time a wrench got thrown into the play, as Jones fumbled the ball, and Fairmont State’s Anthony Fordham recovered.

The offense seemingly rejuvenated out of the locker room, the Falcons put together a nearly five minute drive from their own seven yard-line that ended in a 13-yard Xander Albea touchdown run. Plenty of Falcons got in on the action during the drive, with Albea running for 23 yards, Neal passing for 37, and Myles Miree rushing for 14.

Temperatures rose when Fairmont State then opted for a surprise onside kick. The Falcons recovered, but the officials ruled that the ball had not yet traveled ten yards, and the Yellow Jackets were awarded possession. Over the next few plays, Fairmont State received unsportsmanlike conduct and targeting penalties, while West Virginia State were tagged with an unsportsmanlike of their own.

Newton forced his way into the end zone from one yard out to put West Virginia State back up by 20, 30-to-10, with 9:20 left in the fourth quarter, and it seemed Fairmont State was out of gas.

Fairmont’s wide receiver core had other ideas though. The receivers were talked about as a crucial part of the offense coming in to the season, and they were the Falcons’ engine in the fourth.

Fairmont State receivers totaled 139 yards in the fourth quarter. Javon Hayes started off the surge with a 22 yard snag on a go route. Shawn Harris then took in a 33-yarder to bring the Falcons inside the ten, and one play later Connor Neal would fall into the end zone from a yard out. 30-to-16 Yellow Jackets with over six minutes to play.

After a missed field goal from West Virginia State, Harris would pick right back up where he left off with a 50-yard reception, and then a more modest 9-yard catch. Neal and his receivers stayed hot, with Joshawn Lewis brining in a 20-yard catch and then finishing the drive with a contested five-yard grab. 30-to-23 Yellow Jackets with under a minute to play.

With no timeouts left, all Fairmont State could do was hope for a successful onside kick. A high bounce led to a leaping grab from a West Virginia State special-teamer, but he held on, and the Yellow Jackets held on to the game.

Fairmont State falls to 0-3 with the loss and next face UNC Pembroke.