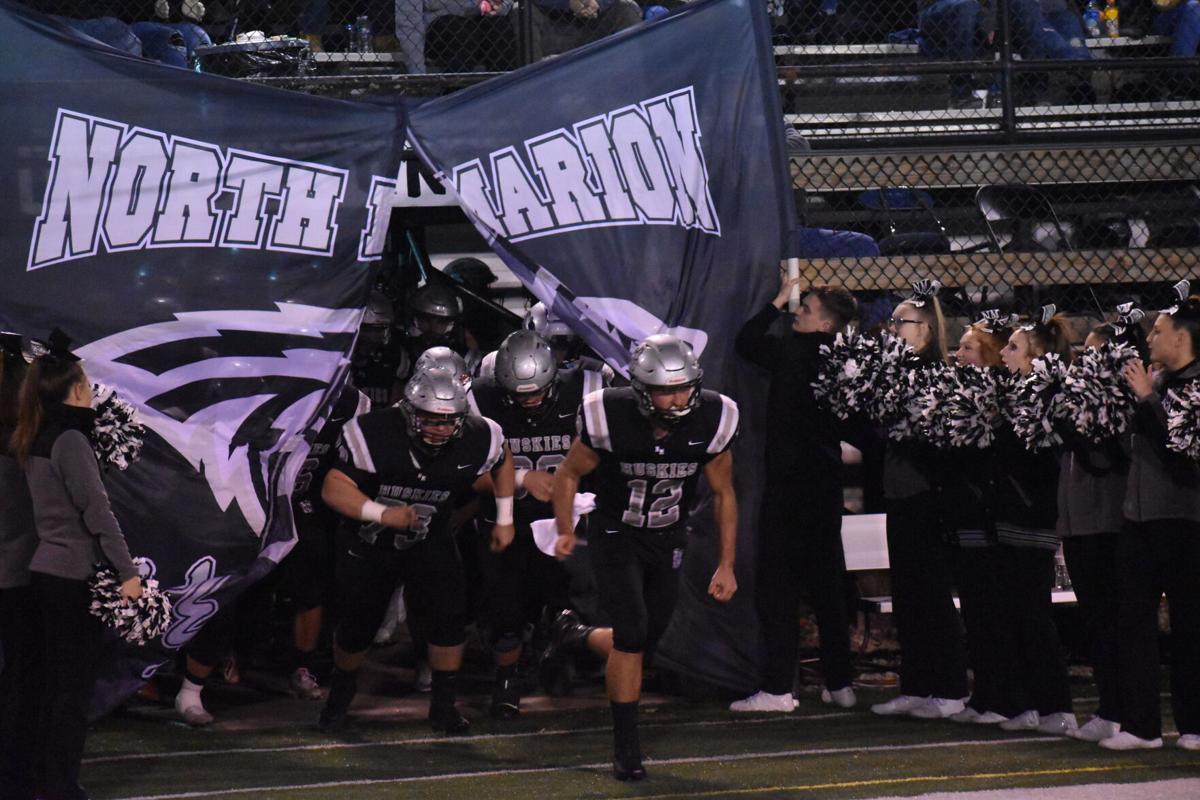 Brody Hall leads the Huskies out of the tunnel to the field at Woodcutter's Stadium. 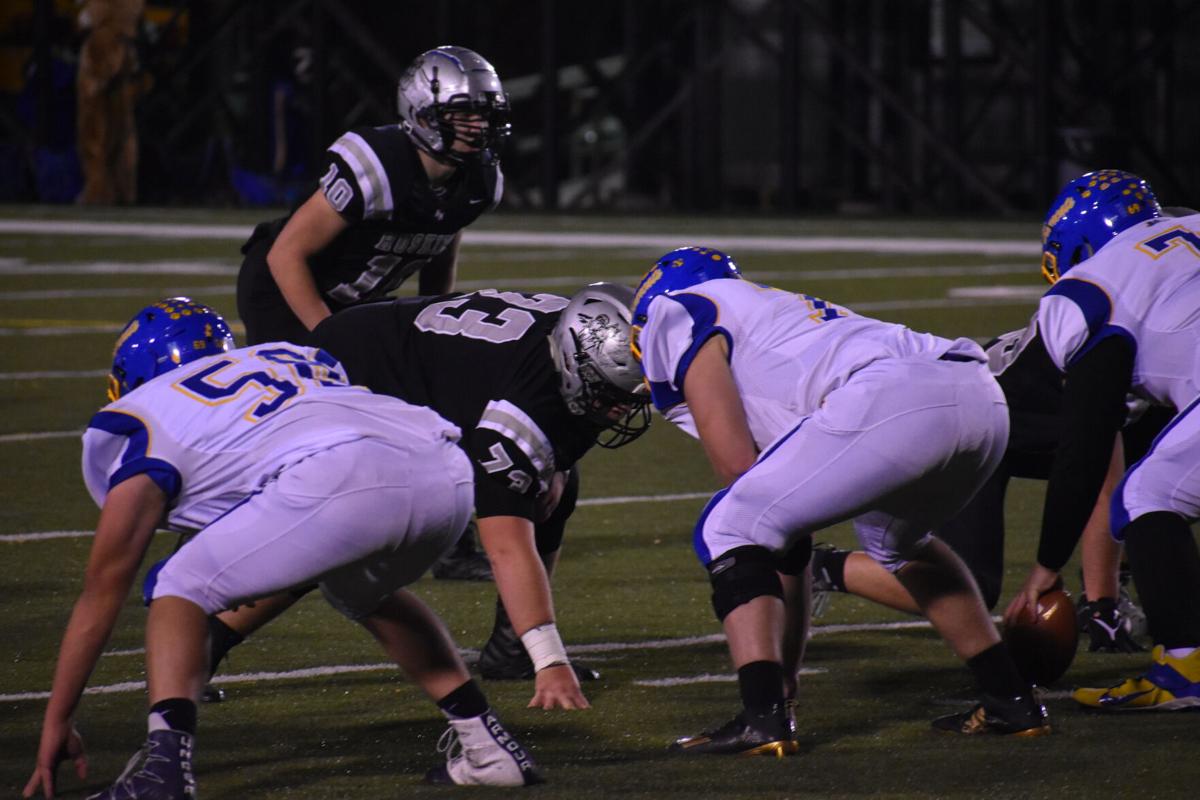 North Marion's Logan Musgrave lines up on the interior of the defense. 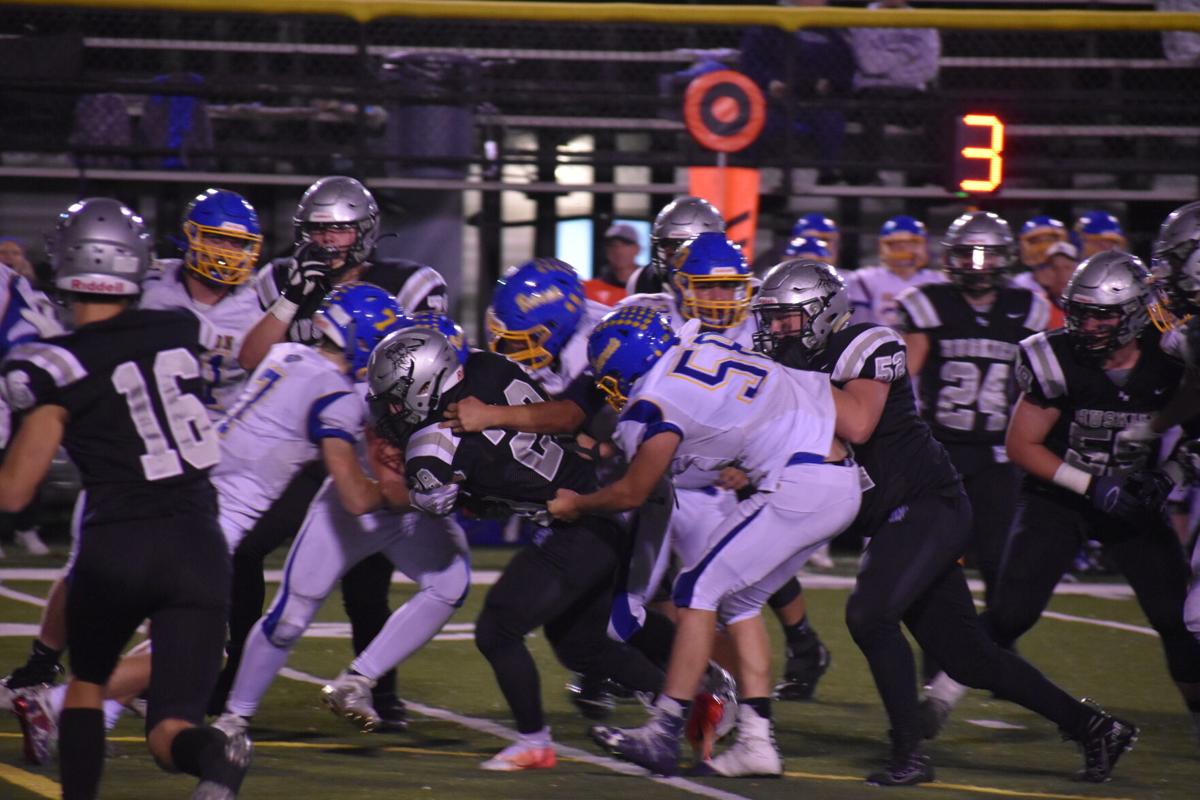 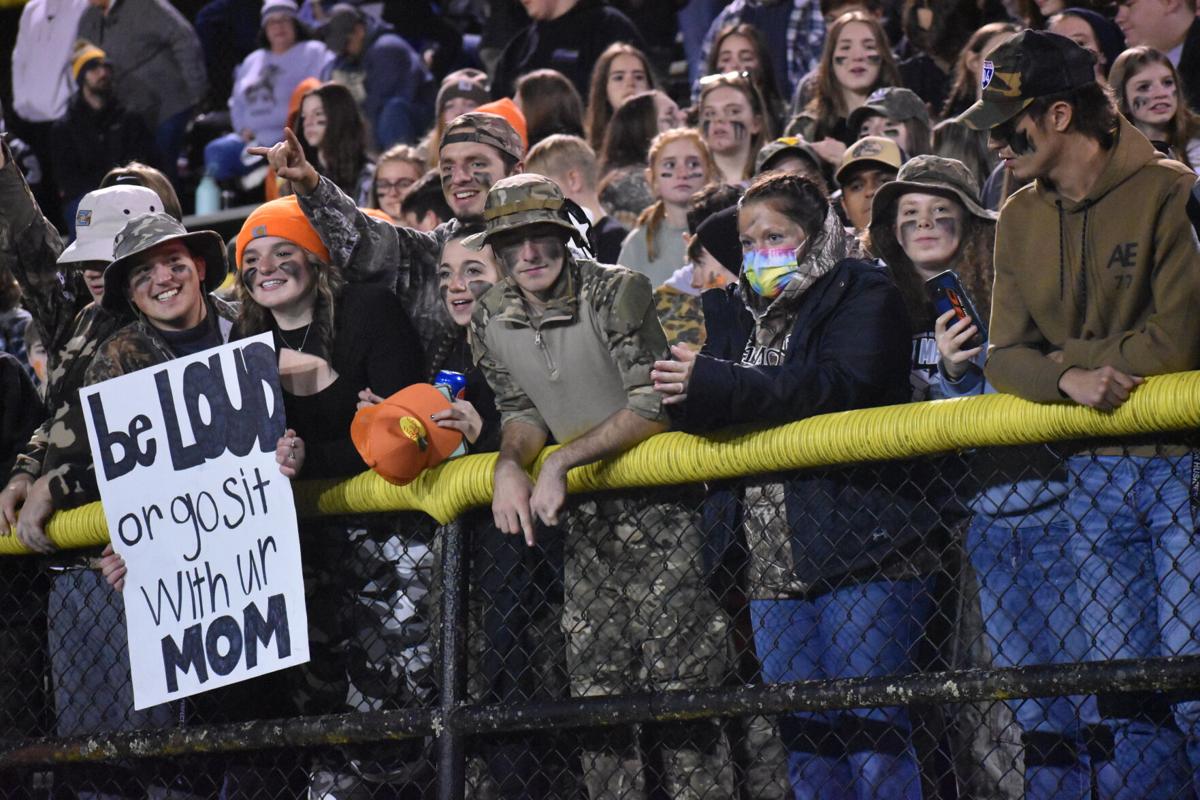 The North Marion student section displays a sign as they cheer during the game. 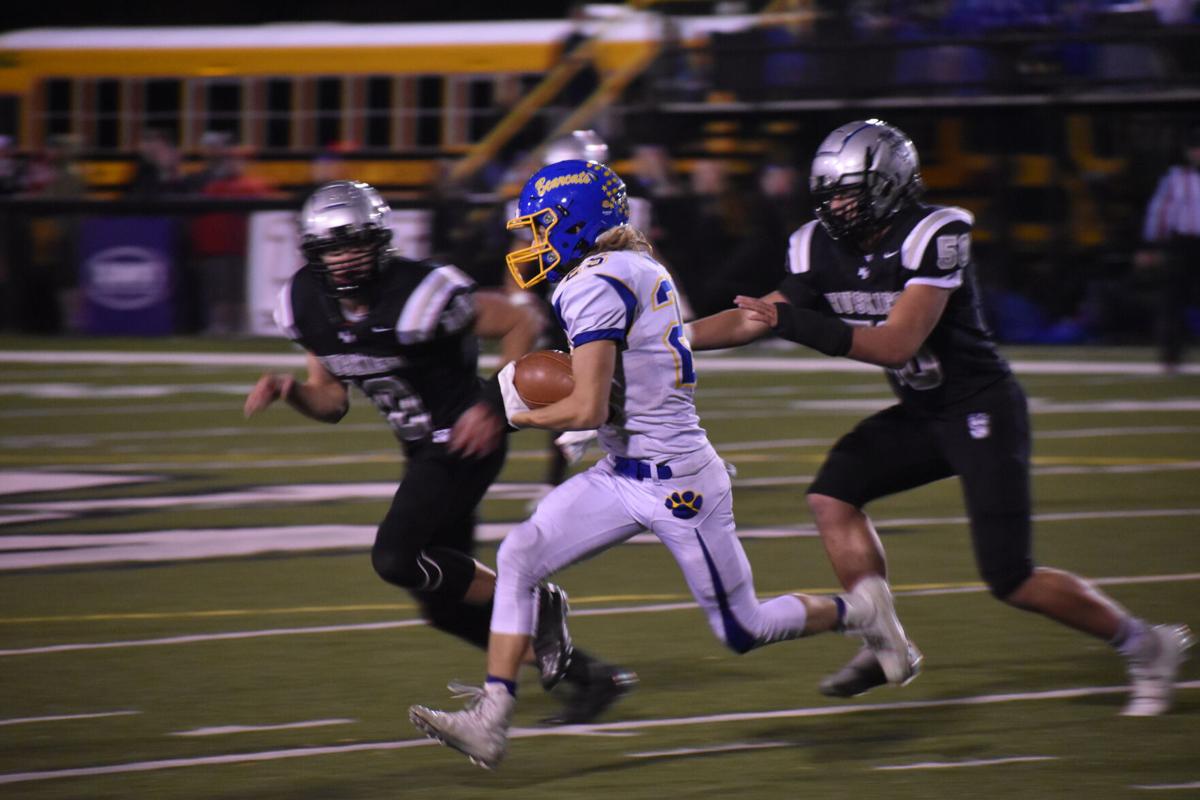 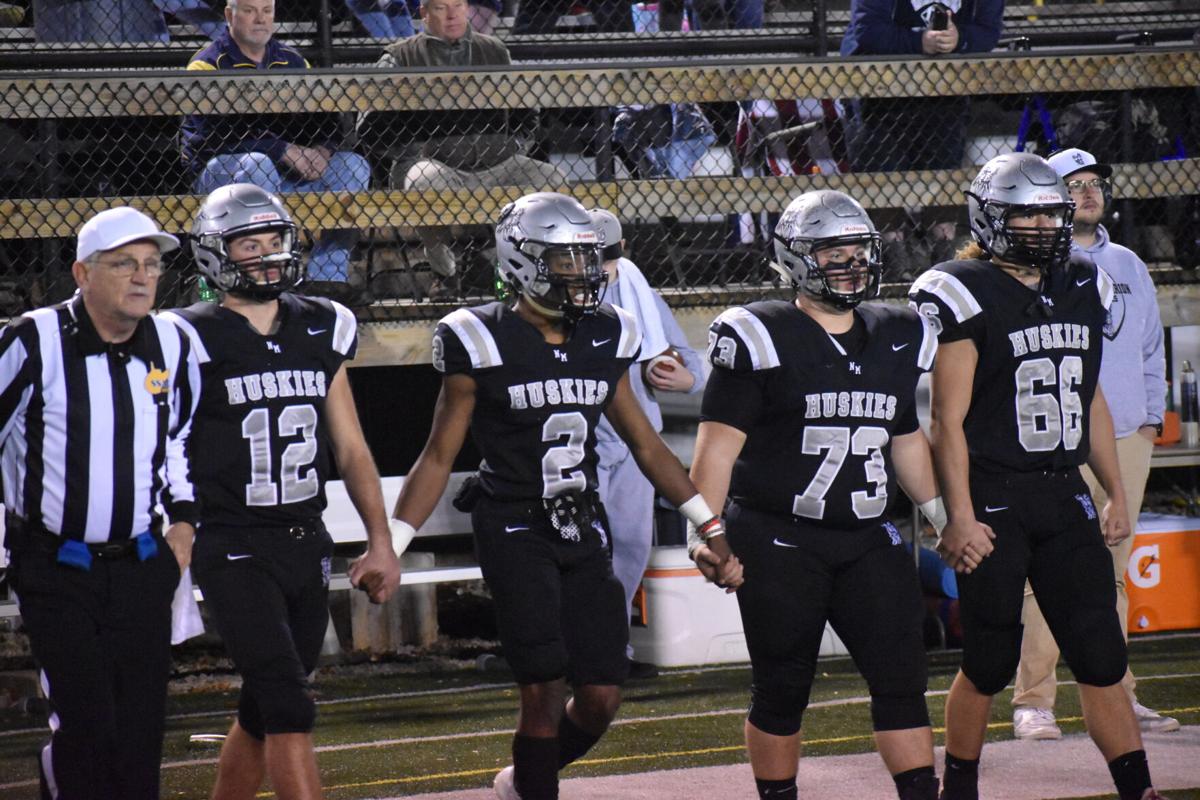 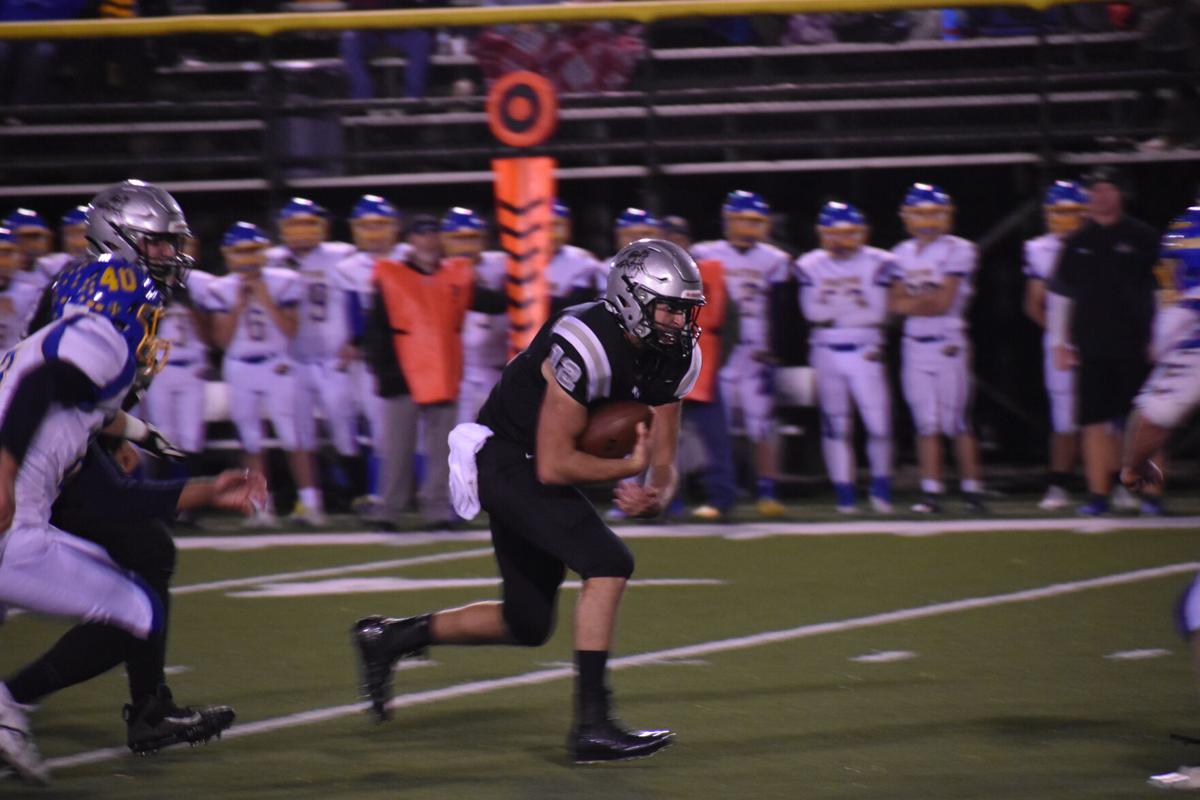 North Marion quarterback Brody Hall braces himself as he runs with the ball. 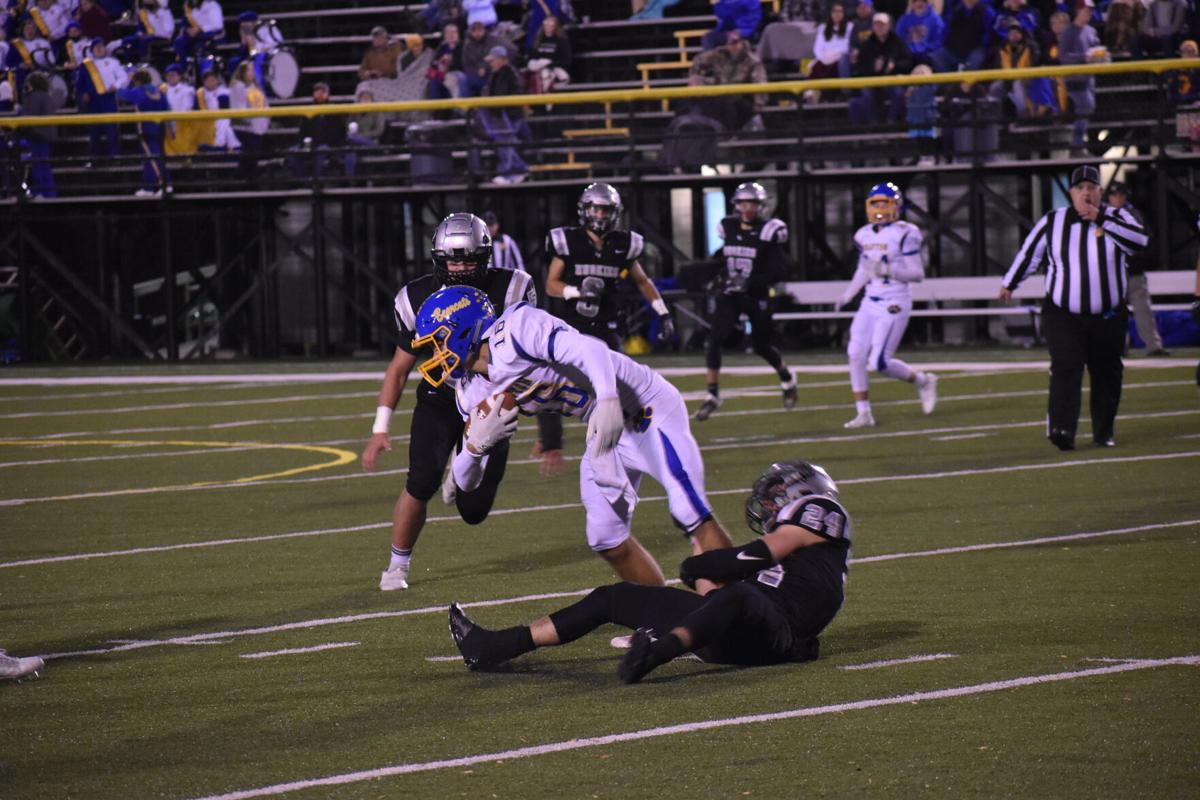 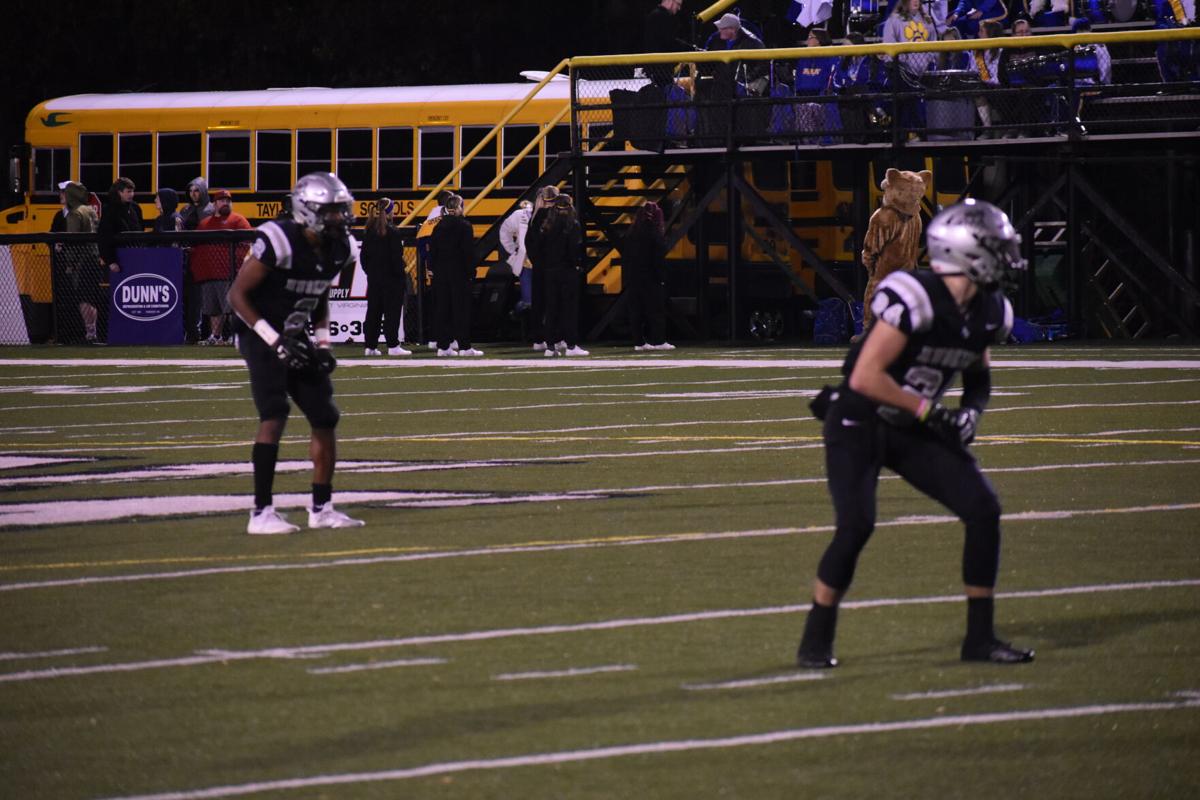 Members of the Huskies' defense Tariq Miller and Cody Clevenger line up before the snap. 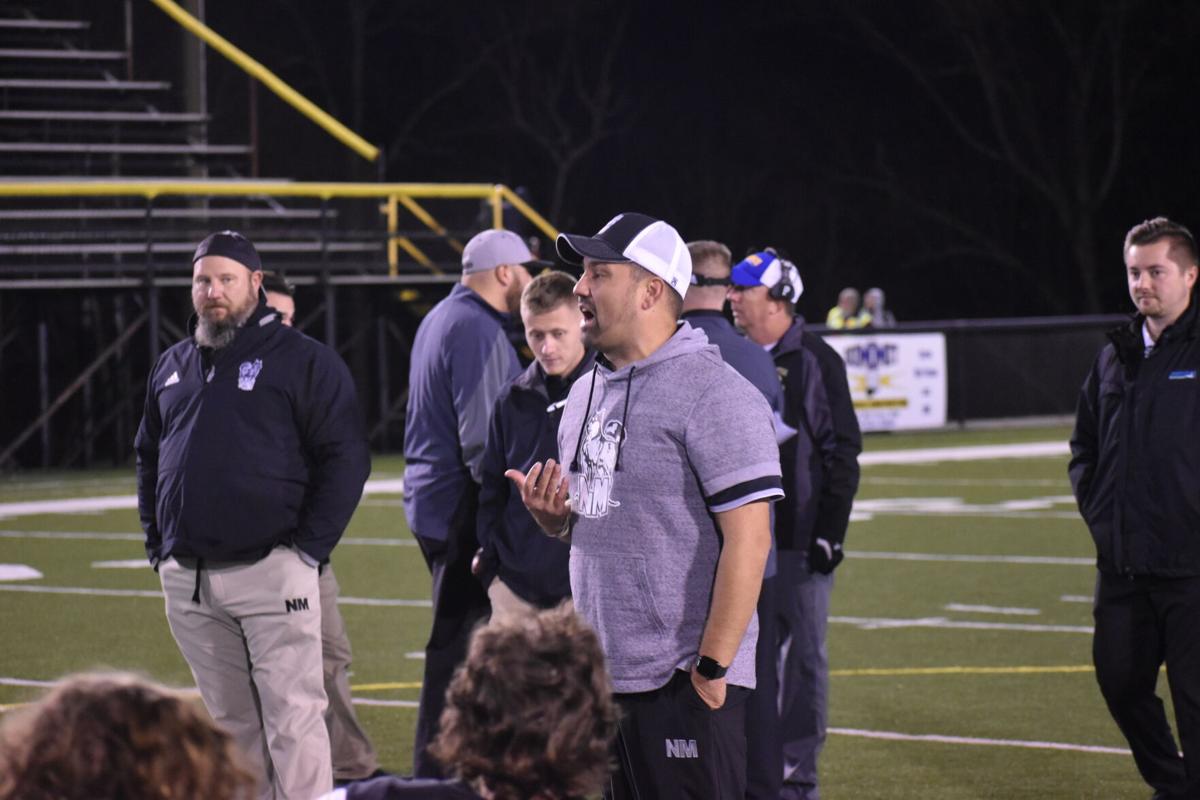 North Marion head coach Daran Hays talks to his team after their win over the Grafton Bearcats. 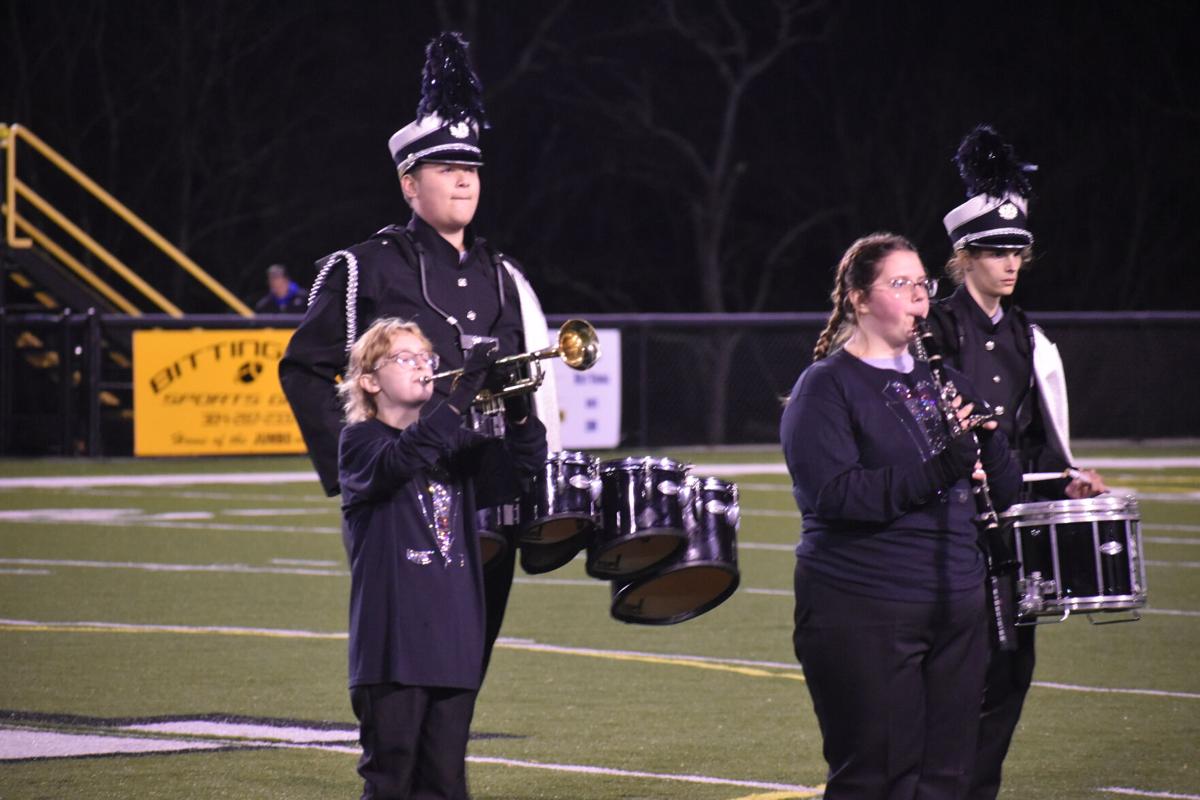 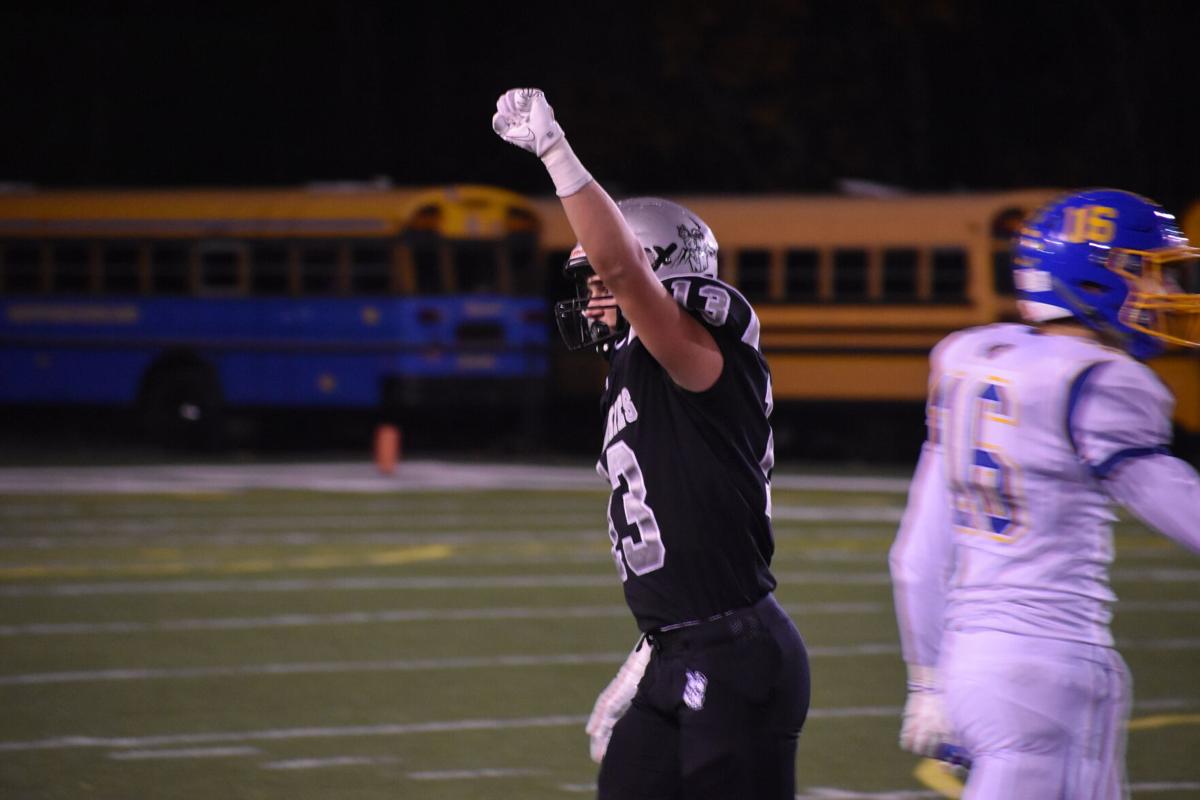 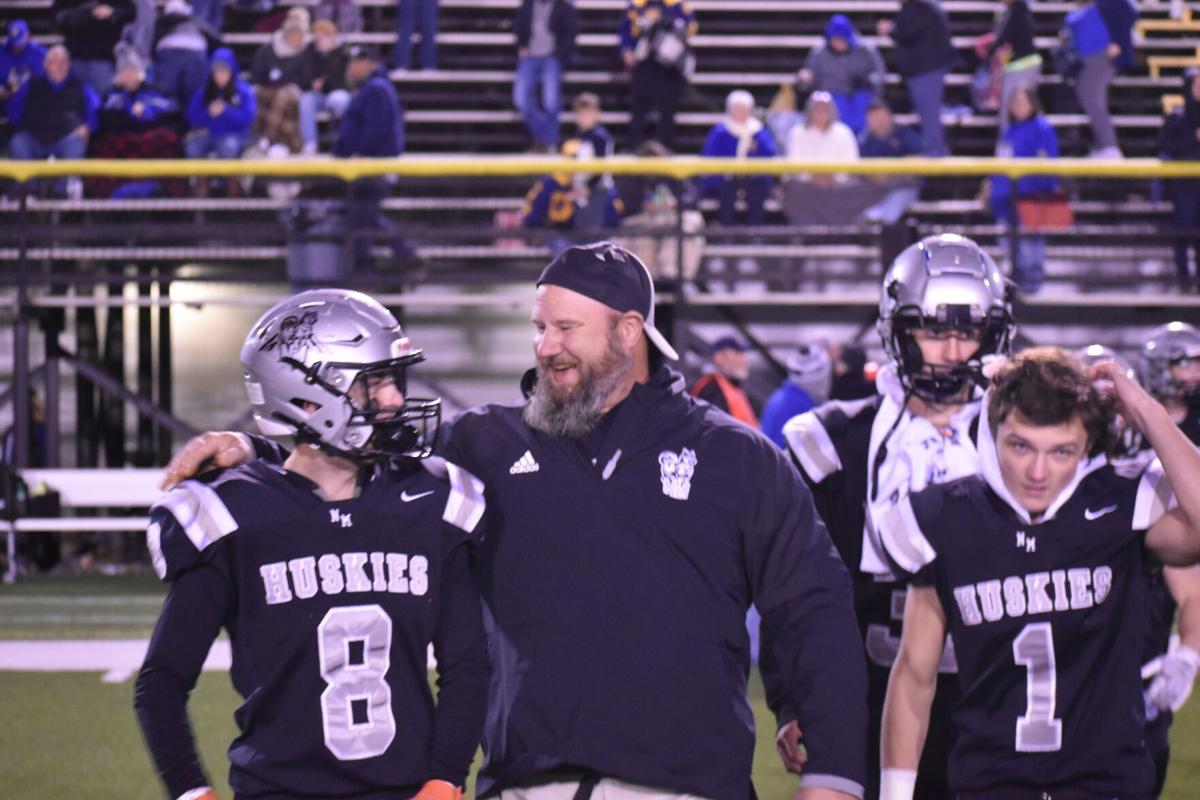 The North Marion Huskies are all smiles after their win against the Grafton Bearcats. 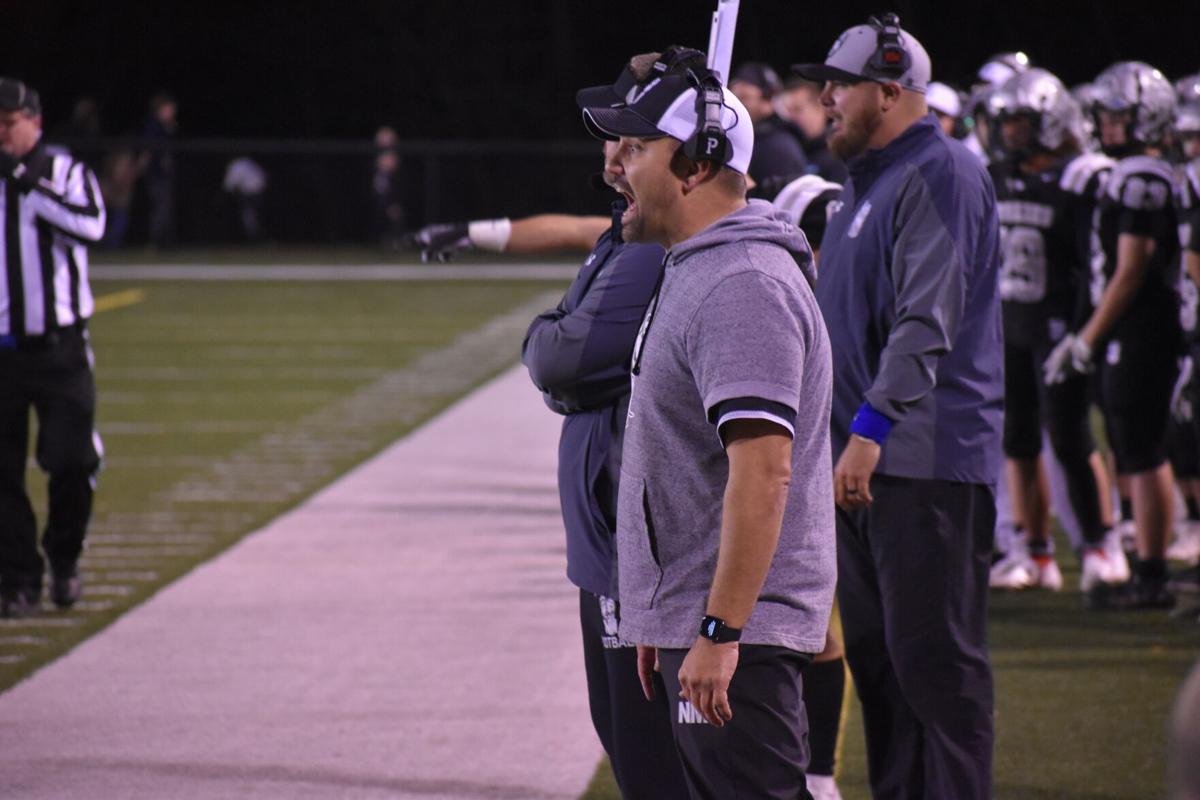 Brody Hall leads the Huskies out of the tunnel to the field at Woodcutter's Stadium.

North Marion's Logan Musgrave lines up on the interior of the defense.

The North Marion student section displays a sign as they cheer during the game.

North Marion quarterback Brody Hall braces himself as he runs with the ball.

Members of the Huskies' defense Tariq Miller and Cody Clevenger line up before the snap.

North Marion head coach Daran Hays talks to his team after their win over the Grafton Bearcats.

The North Marion Huskies are all smiles after their win against the Grafton Bearcats.

RACHEL — The North Marion High Huskies beat down the Grafton Bearcats at Woodcutter’s Stadium in their first-round playoff matchup 64-14, but the first drive of the game wouldn’t have suggested quite that outcome by itself.

In jeopardy of going three-and-out after taking the kickoff, the Bearcats were stymied on a third-and-one by Kaden Hovatter and Tyler Curry. But the Huskies were flagged for roughing the kicker on the ensuing punt. Five yards and a first down.

A few plays later, the Huskies recorded a sack to end the Bearcats’ drive again, but again North was flagged for an obscure personal foul call. Fifteen more yards for Grafton. The Bearcats finally found a big play, with Justin Spiker hauling in a pass over the middle for 44 yards. Quarterback Tanner Moats later finished the drive with an 11-yard touchdown, and aided by a few penalties from North, Grafton led 7-0 with 7:33 to go in the first.

After that however, the Huskies started rolling, and never stopped.

“I thought we responded really well,” North Marion head coach Daran Hays said. “I think that personal foul was a rule dated back to about 32. We were called for aiding our defensive tackle on the blitz, we kind of tripped and fell and grabbed him by the rear end. Never seen that called and the referee said he’s never called it in 35 years. I could go another 35 years without it.”

“But we responded really well. I mean, I’m still complaining about the terrible call. I kind of lost the moment, I moved on, stayed five plays ago. ‘Riq [Miller] kind of busted a coverage. But like you said, we came back, we executed offensively and we went back to 0-0 essentially. We kind of settled in and played really well offensively.”

The Huskies had the game wrapped up by halftime when they led 41-7. North dominated on the ground, with 205 of their 291 first half yards coming via the run. Gavan Lemley had 87 yards rushing in one half of work, and three touchdowns. Parker Kincell had 114 yards on the ground and three touchdowns of his own. Quarterback Brody Hall had 49 rushing yards of his own and a score.

“We love to run the football,” North’s Logan Musgrave said. “We run it, we enjoy it, we like to pancake people and really like to dominate the line of scrimmage every game, that’s our goal.”

The Huskies tied the game back up after starting their drive past midfield following a squib kick by Grafton. Kincell got the first of many North Marion touchdowns on Friday, taking a sweep to the left for 30 yards with five minutes left in the first quarter.

North’s Aaron Hoffman recovered a fumble on the kickoff that followed to give the Huskies the ball again at the Grafton 20. The home team capitalized on the short field, where Hall completed two passes to Cruz Tobin and Harley Sickles, respectively, before ending the drive by keeping it himself for a three-yard score. With 3:40 to go in the first, North gained a lead that they would quickly build upon.

It was the first of multiple turnovers for North, as the Huskies had the edge in just about every facet of the game. Defensively, Hays’ squad held Grafton to 95 total yards in the first half, including just 13 rushing yards. Combined with on-point kick coverage in special teams, and the parameters Hays had set for a winning formula had been met.

“Tough teams cover kicks,” Hays said. “We say that every week, that is the one thing they can repeat now — tough teams run the football, stop the run, and cover kicks. You just alluded to running the football, I thought their ground game was pretty much non-existent until we had the threes in. And we covered kicks all night. That was a challenge this week, because I thought our kick coverage against Liberty was just god-awful.

The defense came through on Grafton’s next drive, with Hovatter instantly shedding a blocker off the edge to record a sack and force a punt. North drove for the rest of the first quarter, and scored seconds into the second quarter, with Lemley taking a handoff from the gun, weaving outside and tight-roping in along the sideline from 15 yards out.

The Bearcats got stone-walled on a fourth-and-short QB sneak attempt, and Kincell was back in the end zone, rushing for 33 yards to get to the 3-yard line, and punching it in with his next carry.

North recovered another fumble with five minutes to go in the half, but soon faced their own fourth-and-short. Handing it off to Lemley, the junior runner got the necessary yardage, but wasn’t satisfied. Lemley seemingly carried the entire Bearcat defense on his back while driving forward, shrugging them all off to break through and go all the way for a 40-yard touchdown with 4:19 to go in the half. North lead 35-7 at that point.

“He’s a Volkswagen Beetle, man,” Hays said of Lemley. “He’s really low to the ground, he’s got excellent balance and he’s one of the strongest guys on our team [...]. He’s phenomenal. He works his tail off in the offseason, he’s a really good, mature kid, and he really trusts in the system.”

“Our mindset is just wanting to win,” Lemley said. “Having us together and wanting to be one. Just thinking about winning and sticking together.”

Lemley punched in a 1-yard score with 13.9 seconds in the half, and the Huskies picked up right where they left off in the second half.

It only took two plays for the Huskies to get back in the scoring column after taking the second-half kickoff. Grafton’s defense got sucked in on a play-action from Hall, who dropped it over the top to a wide-open Harley Sickles who raced into the end zone for a 55-yard score. It was one of several plays that North executed to a T on Friday.

“We watched a lot of film this week, prepared pretty well for them,” Musgrave said. “We studied them pretty hard. Our goal is to try to know them better than they know themselves and I’d say we did that pretty well tonight.”

Landon Frey snagged an interception on a deep ball to give North the ball back on their own 1-yard line, but a 50-yard run from Brody Hess and 31-yard touchdown run from Parker Kincell later, and the Huskies had turned a precarious situation into more points.

Many starters got comfortable on the sideline in the second half, but the scoring continued. Before his backup came in though, Tyler Curry forced a safety with three minutes left in the third quarter. Then with under a minute to play in the third, Aaron Hoffman raced around the edge of the defense for a 42-yard score.

Grafton’s Issac Lough got a garbage-time touchdown with 3:39 left in the game to wrap up the score line at 64-14. Justin Spiker was a bright spot for the Bearcats, putting up 100 receiving yards and a touchdown to go with 31 yards rushing.

North Marion will play the winner of the upcoming Point Pleasant-Bluefield game. The games only get harder the farther you go in the playoffs, and both these teams will offer different challenges.

“Both coaches are phenomenal,” Hays said of Point Pleasant and Bluefield. “Obviously Freddy [Simon]’s a legend, and then what Dave [Durst]’s done at Point Pleasant — both classes, triple-A and double-A — he’s as good as anybody in the business. He’s changed defenses, changed offenses, but all he does is have success with great seasons and deep playoff runs. Obviously we’ve got a ton of respect for both [...]. There’s benefits to both, as far as matchups.”

“I think we’re in a really tough quarter-bracket. I’ve told our guys for a couple weeks [...] this is legit the end of the three-quarter, two-quarter performances. We’re going to have to play four quarters and really put it together for either program and anybody from here on out. There’s a lot of really good football teams, I think this is the best double-A field in West Virginia that I’ve seen since I’ve been coaching. Just a lot of depth, everybody’s pretty even and great at different things.”