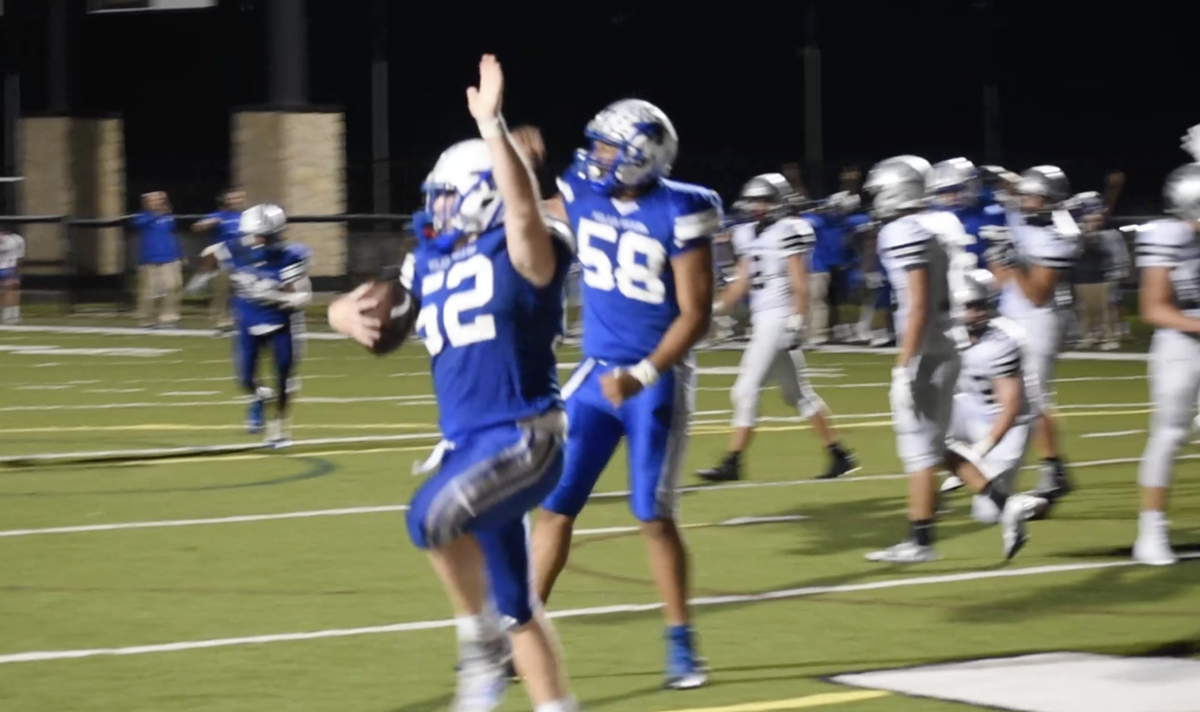 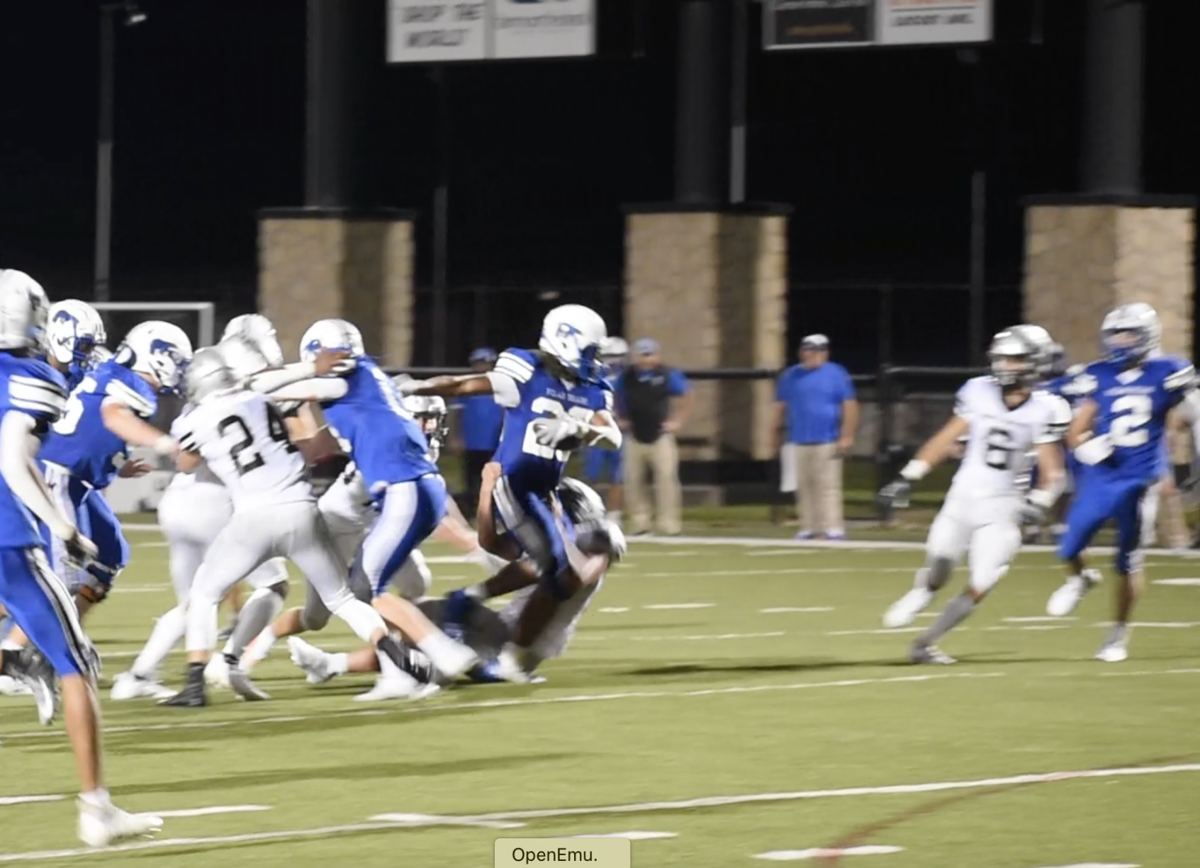 Fairmont Seniors’ Germaine Lewis fights forward through the defense during a run. 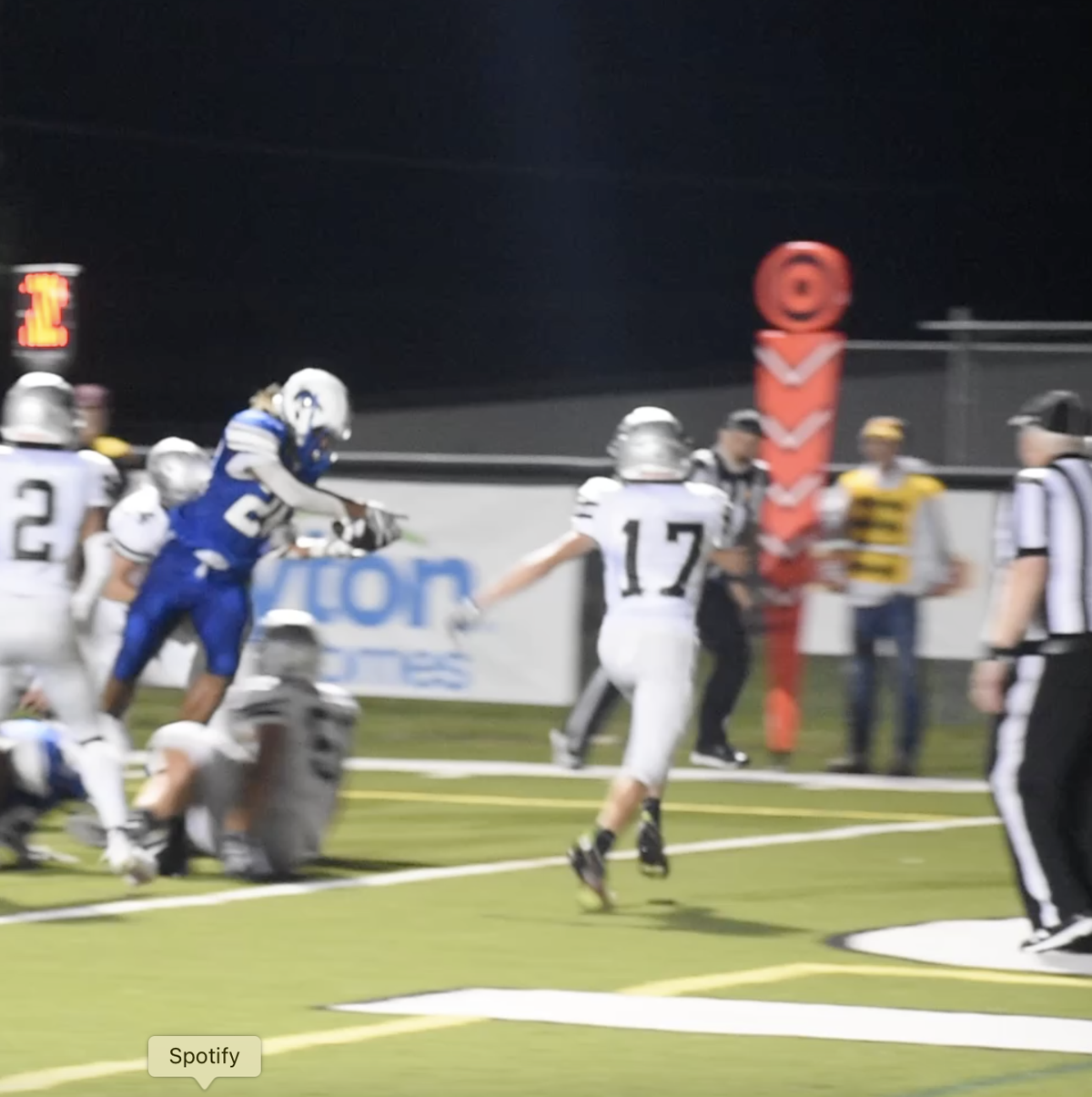 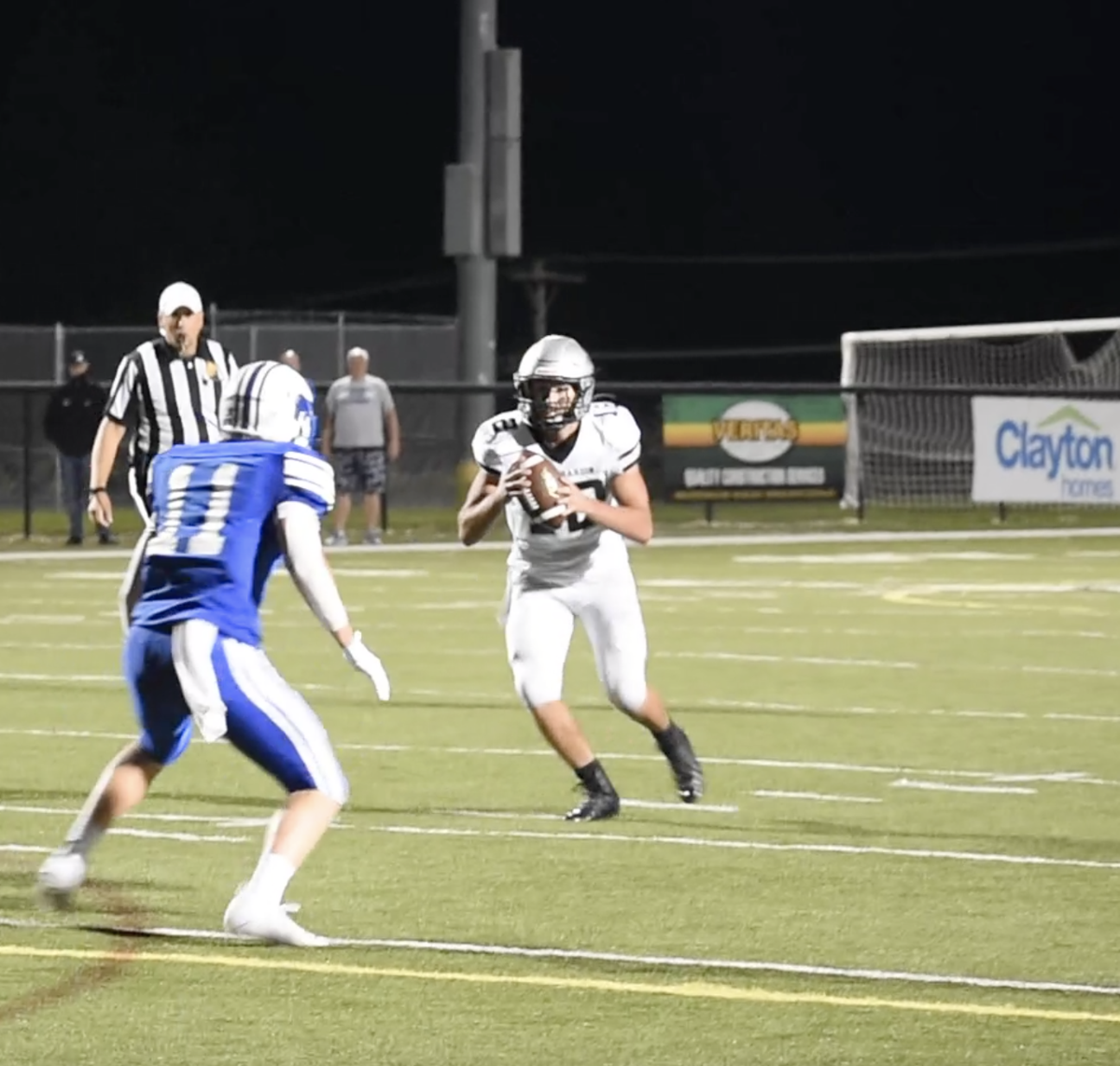 North Marion’s Brody Hall sizes up a defender during a run.

The Fairmont Senior Polar Bears get ready for their matchup against the North Marion Huskies. 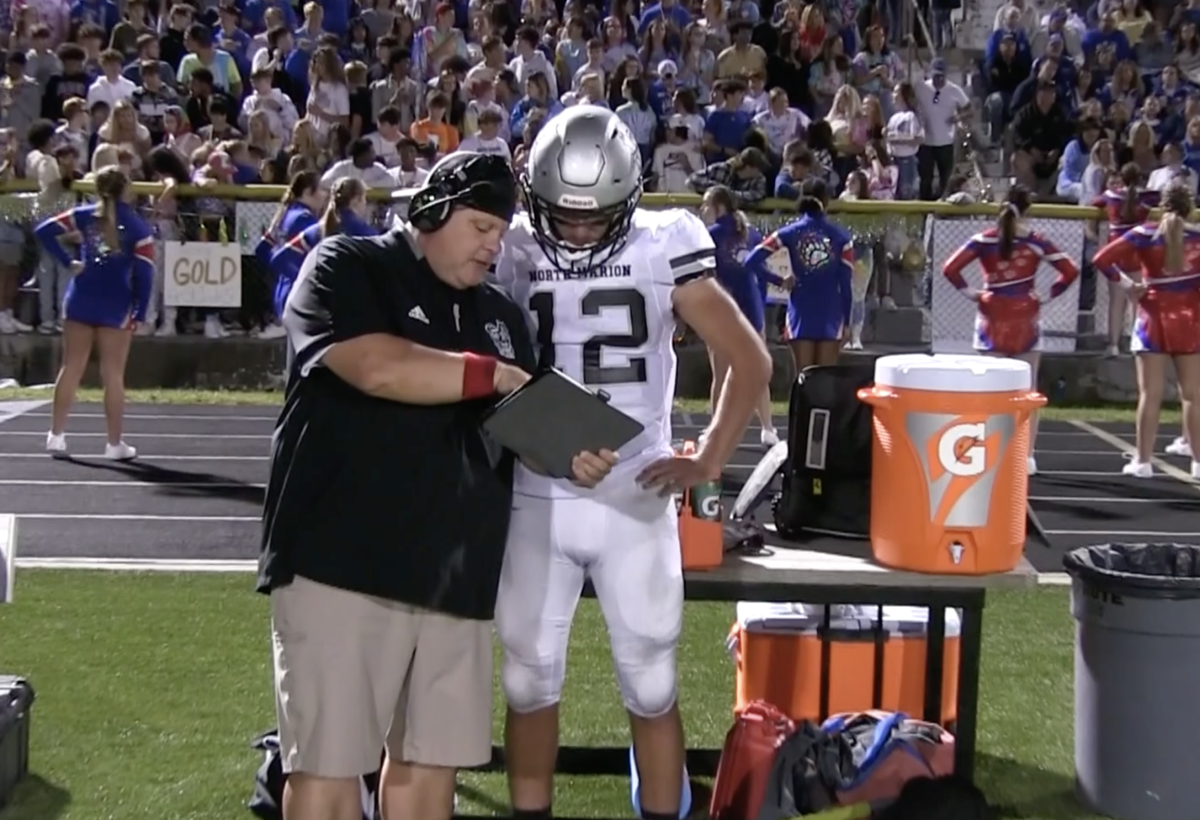 North Marion's Brody Hall goes over film with a coach on the sideline.

Fairmont Seniors’ Germaine Lewis fights forward through the defense during a run.

North Marion’s Brody Hall sizes up a defender during a run.

The Fairmont Senior Polar Bears get ready for their matchup against the North Marion Huskies.

North Marion's Brody Hall goes over film with a coach on the sideline.

FAIRMONT — Through plenty of penalties, turnovers and miscommunications, the Fairmont Senior Polar Bears grinded out a 20-to-14 victory Friday over the visiting North Marion Huskies after some late-game heroics from an unlikely source.

The Polar Bears were pushed back by a holding penalty on their first two plays of the game, back-to-back. The calls were an omen of what kind of problems Fairmont Senior would deal with all game. Seven holds would be called against coach Nick Bartic’s squad in the first half alone, as the Polar Bears would hurt their own chances even more than the opposing defense.

“A lot of adversity,” Bartic said of his team’s start. “Clearly we were making some mistakes that we repeated.”

Yet Fairmont Senior still surged forward, as runners like Germaine Lewis, Dylan Ours and Landen Tasker fought for extra yards on every carry, wearing down the Huskies defense.

Lewis especially proved to be a driving force for a Polar Bear offense that otherwise had its share of slip-ups Friday. He broke through for a 12-yard touchdown with just under eight minutes to go to put the first points on the board.

Fairmont Senior would have some miscommunications that led to one player bumping into another as the ball was snapped for a two-point conversion attempt, and the Polar Bears would lead 6-0.

As for North Marion, they had their own offensive struggles to work through. The Fairmont Senior front seven kept the Huskies run game in check, never allowing a run of more than 10 yards on Friday. Koby Toothman, Bralyn Michael, and Eric Smith shed blocks quickly on the defensive line, while linebackers like Mike Kruzel and Dylan Ours filled gaps just as quickly from the linebacker position.

The Huskies’ own defense, though, would come up with the biggest play of the first half, to their own credit. Backed up against their own end zone after another a holding call and a sack from Harley Sickles, sophomore Landon Frey reeled in an interception on an attempted short pass, and stepped into the end zone for a pick-six. After the extra point, North Marion led 7-to-6 with under five minutes to go in the first quarter.

The score would stand 7-to-6 going into halftime. Fairmont Senior were able to move the chains on the ground with Ours and Lewis, but kept getting in their own way.

With time running down to end the first quarter, Polar Bears quarterback Dom Stingo was loudly going through his cadence, trying to draw the Huskies offsides before the quarter ended. Right as the buzzer sounded, however, the ball was snapped.

Many of the players thought the quarter had ended, and stood still, but after half a second, realized the play was live. Stingo managed to get a short gain, but the miscommunication would cost the Polar Bears a down, and Fairmont Senior’s drive ended with a turnover on downs.

The second quarter witnessed a lot of punts and fumbles. Two Polar Bear fumbles within two minutes of each other gave North plenty of opportunities on offense, but the Huskies couldn’t get in rhythm across from a sturdy defensive front.

Despite some positives in the first half, the Polar Bears looked at the scoreboard going into their locker rooms and saw themselves down by one.

The opening action of the second half saw both teams knocking on the door of the end zone, but unable to cash in. The Huskies got into the red zone for the first time after a catch over the middle by Tobin Cruz, but after a failed fourth down pass, they yielded the ball back to Fairmont Senior.

Going into the fourth quarter with the ball, it was once again Lewis’ time to shine for the Polar Bears. The junior took a pass to the flats nearly 20 yards into the red zone, and after some back-and-forth penalties— too many players on the field for Fairmont Senior — would push them back, then a PI call would pull them forward again— Lewis pounded his way into the end zone from four yards out. This time, the two-point conversion was successful after a direct snap to Evan Dennison. With 10:30 to go, Fairmont Senior was up 14-7.

Now faced with a deficit, North Marion rose to the occasion, quarterback Brody Hall lead the Huskies down the field. Passes to Frey, Tariq Miller, and an eight-yard run of his own highlighted the drive, before Hall finished the sequence with a 13-yard touchdown run after freezing a few Polar Bear defenders with some nifty footwork. With six minutes left in the game, the contest stood at a tie, 14-all.

Fairmont Senior would be back to their ground-and-pound game plan the next drive, though, and late in the game they seemed to have worked out their penalty woes, winding the clock down and getting the ball down to the goal line with little trouble.

Taking a timeout with 40 seconds to go, the Polar Bears lined up in a heavy set at the two-yard line. With Lewis positioned as the running back in the I-formation, the bruiser seemed poised to get yet another carry, but Fairmont Senior opted to give the rock to the man lined up between Lewis and Stingo — Koby Toothman.

Toothman, who had played a great game along the offensive and defensive lines to that point, took the handoff and dove through the mass of bodies on the goal line to put his Polar Bears up 20-14 after a failed two-point attempt.

North Marion had one timeout, 37 seconds and about 70 yards to go. A pass interference call nullified an interception and moved the Huskies up to midfield. On their last play, Hall had to chuck it deep under pressure, and the ball would once again be picked off by Kayson Nealy, who ran to the sideline to wind the clock down to zero. The Polar Bears defended their home turf by the skin of their teeth and the strength of their run game.

Friday’s was an emotional game, with plenty of game-defining moments for both sides. For a team that’s still growing, Bartic saw the value beyond the plus-1 in the win column.

“These guys, even if they’re older, upperclassmen, they aren’t guys who had to be the man for their time,” Bartic said. “So in terms of game experience we are relatively young and inexperienced in that regard. This was a gut check for those guys in terms of getting the job done.”

The game was a short respite from the road for Fairmont Senior, who played their first home game Friday, and will be back on the road next week against Bridgeport. For North Marion, they’ll return to Woodcutters Stadium next against Brooke.