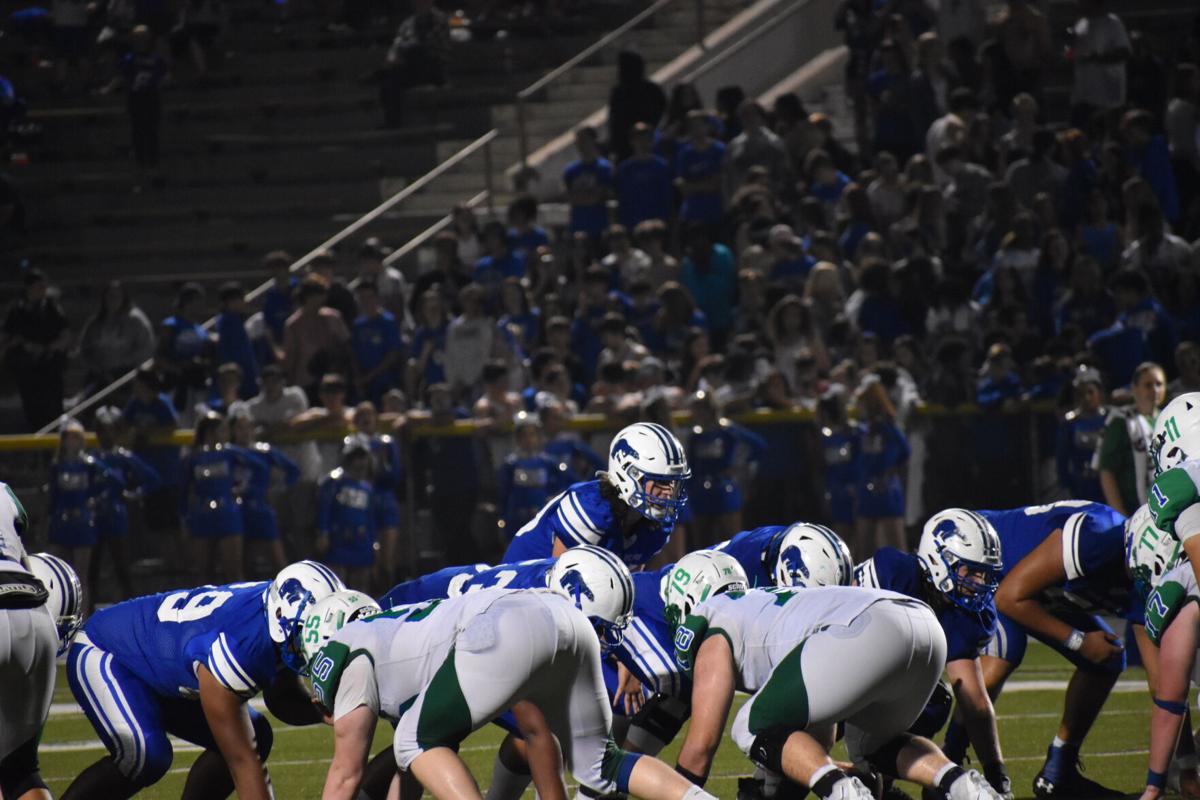 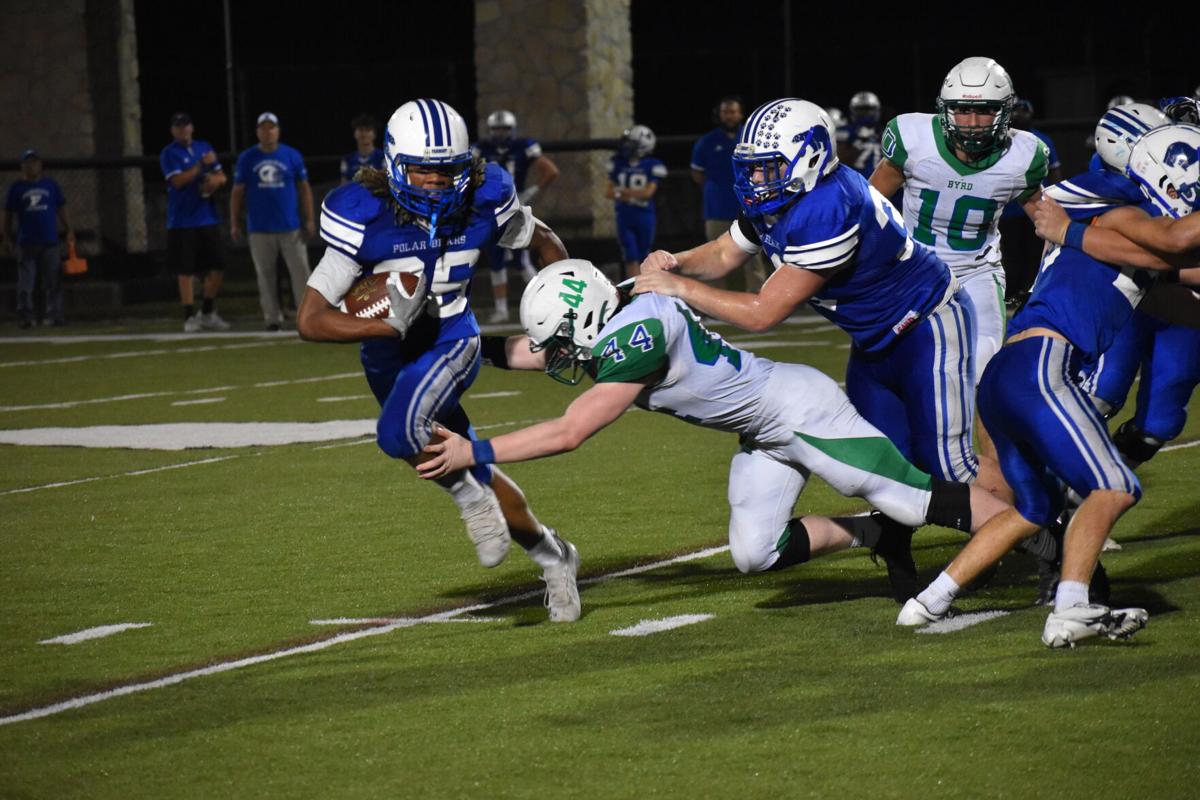 Fairmont Senior’s Germaine Lewis shrugs off a tackle during a rush vs. Robert C. Byrd. 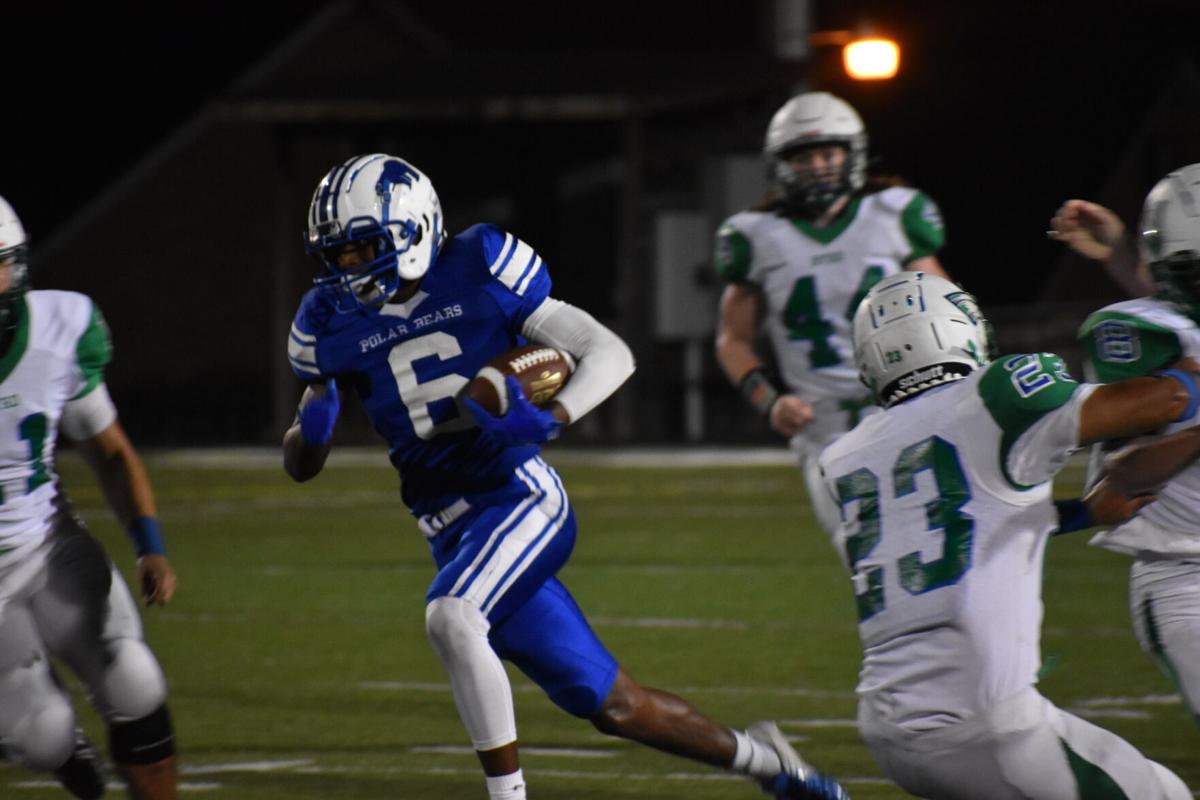 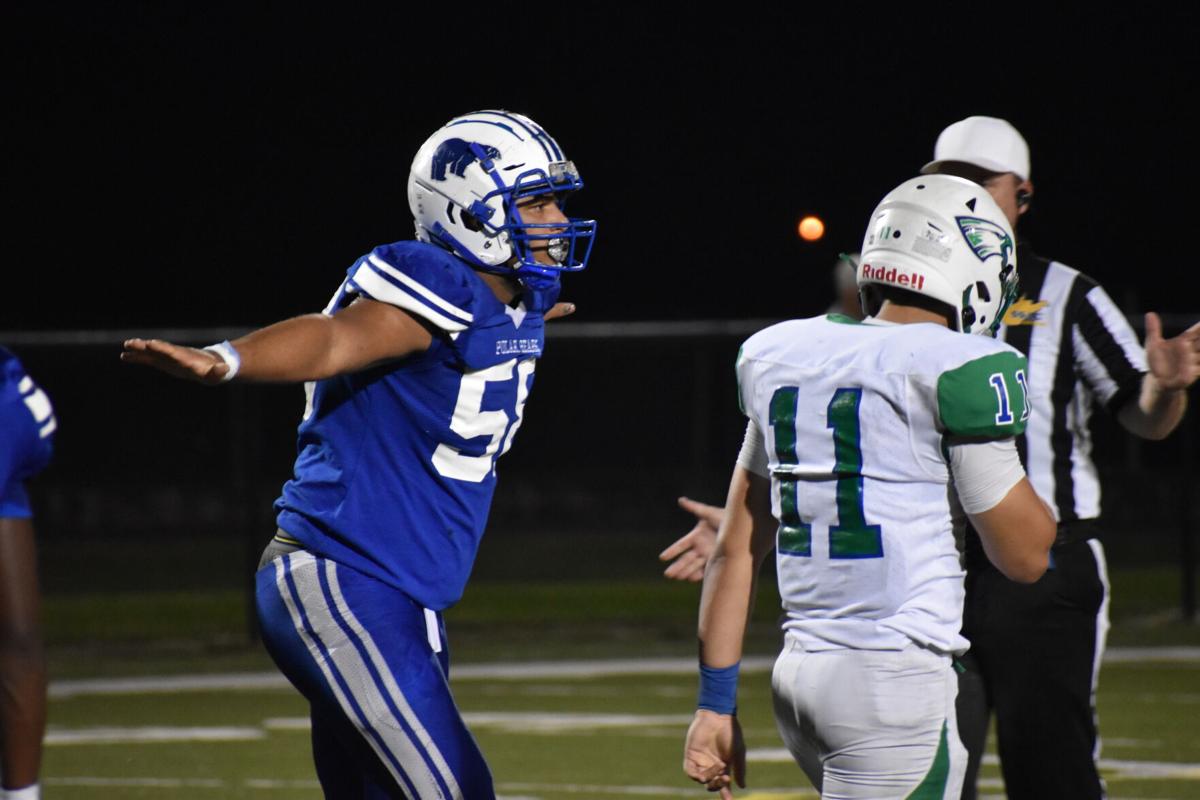 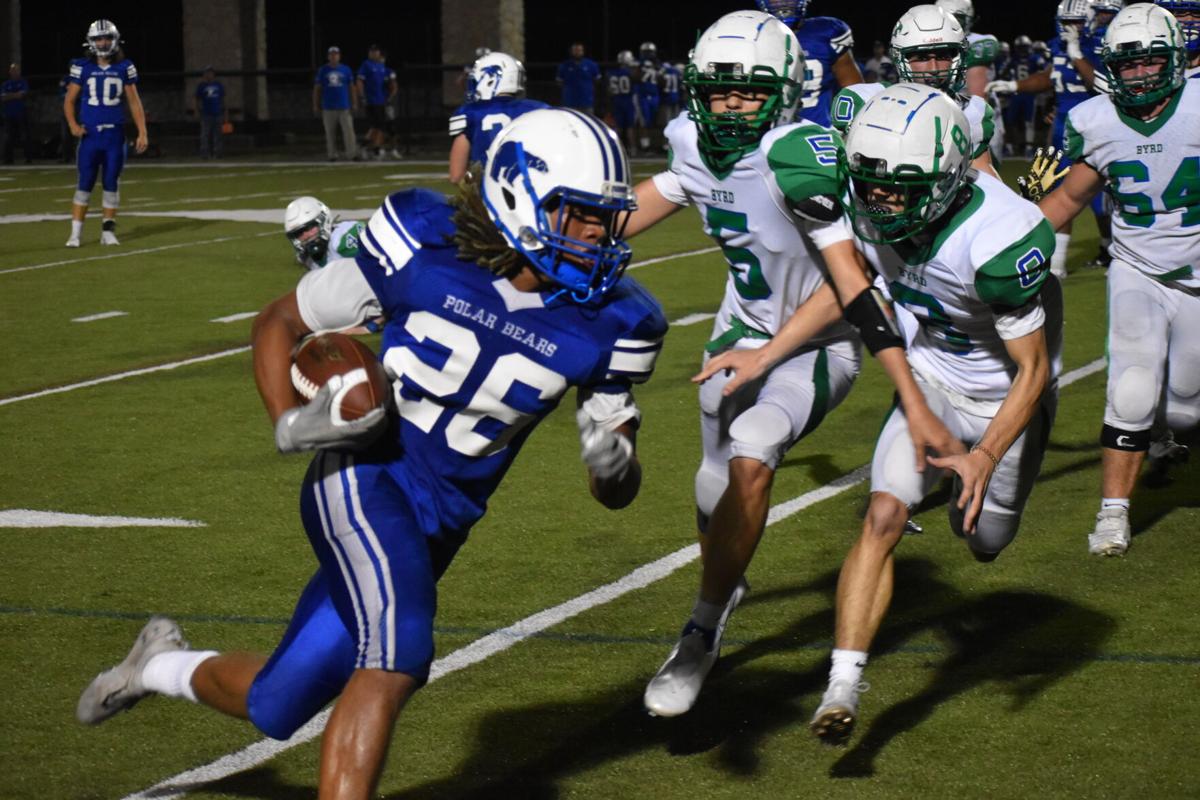 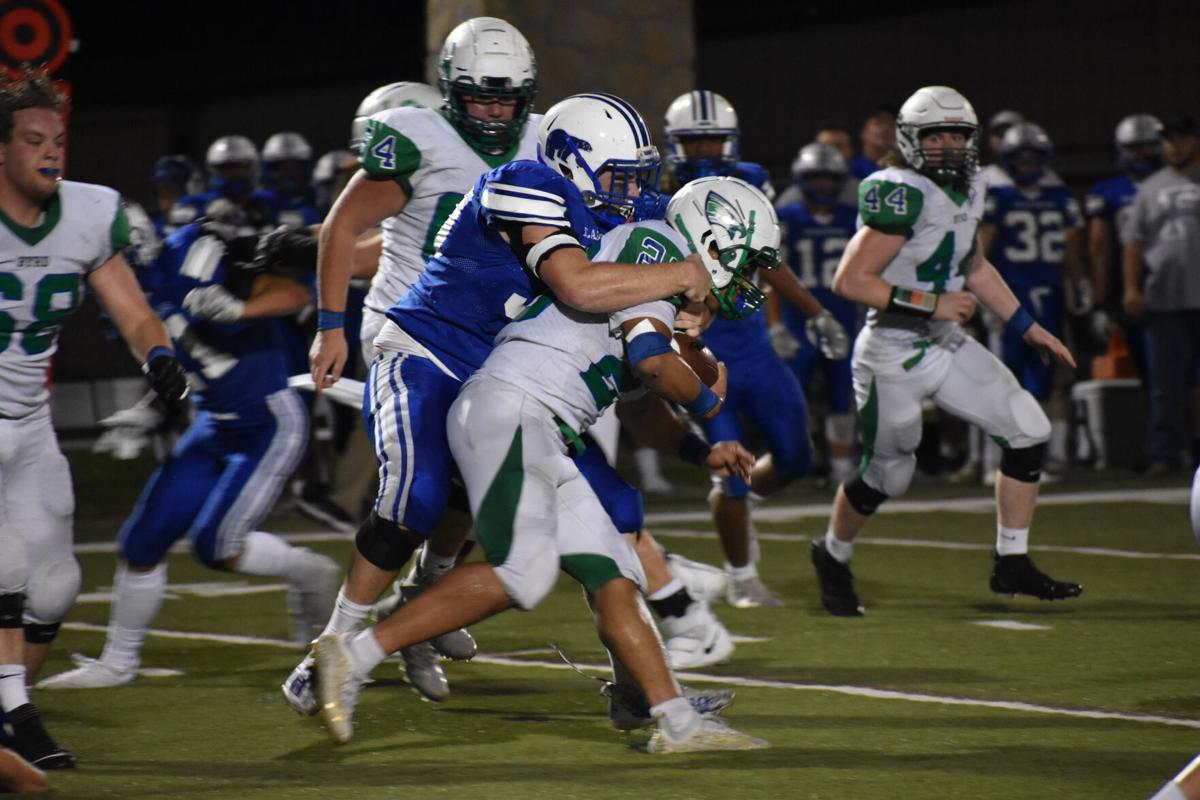 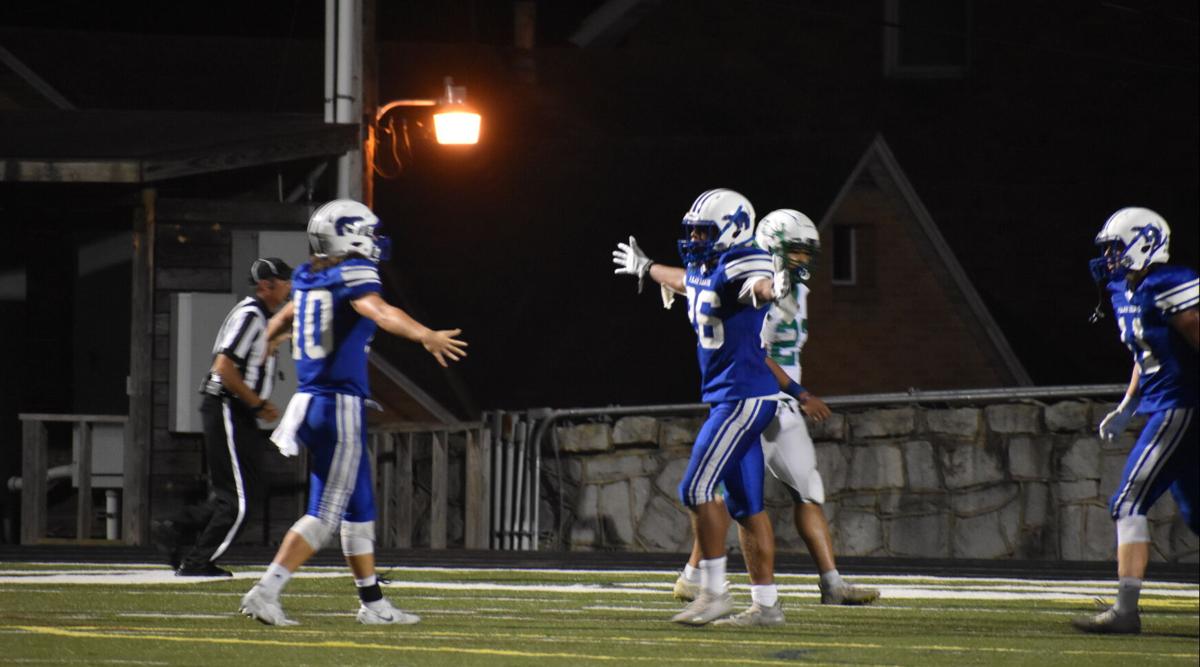 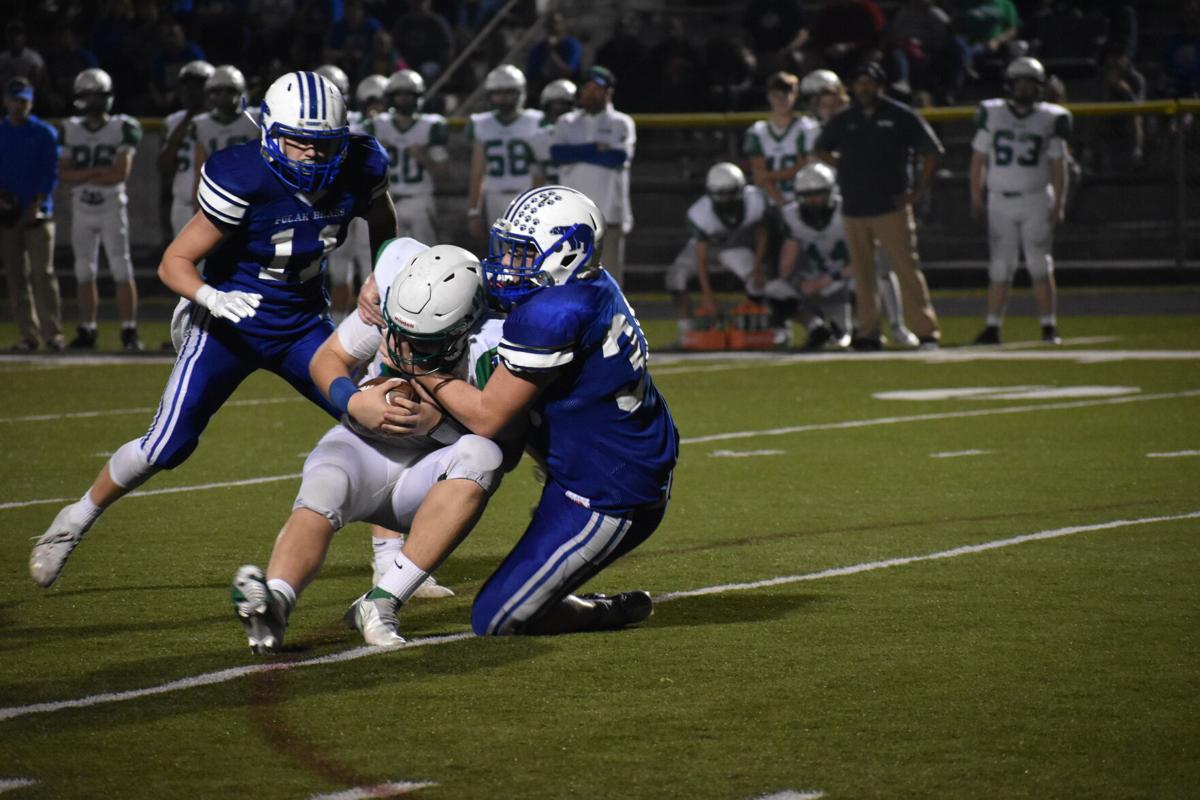 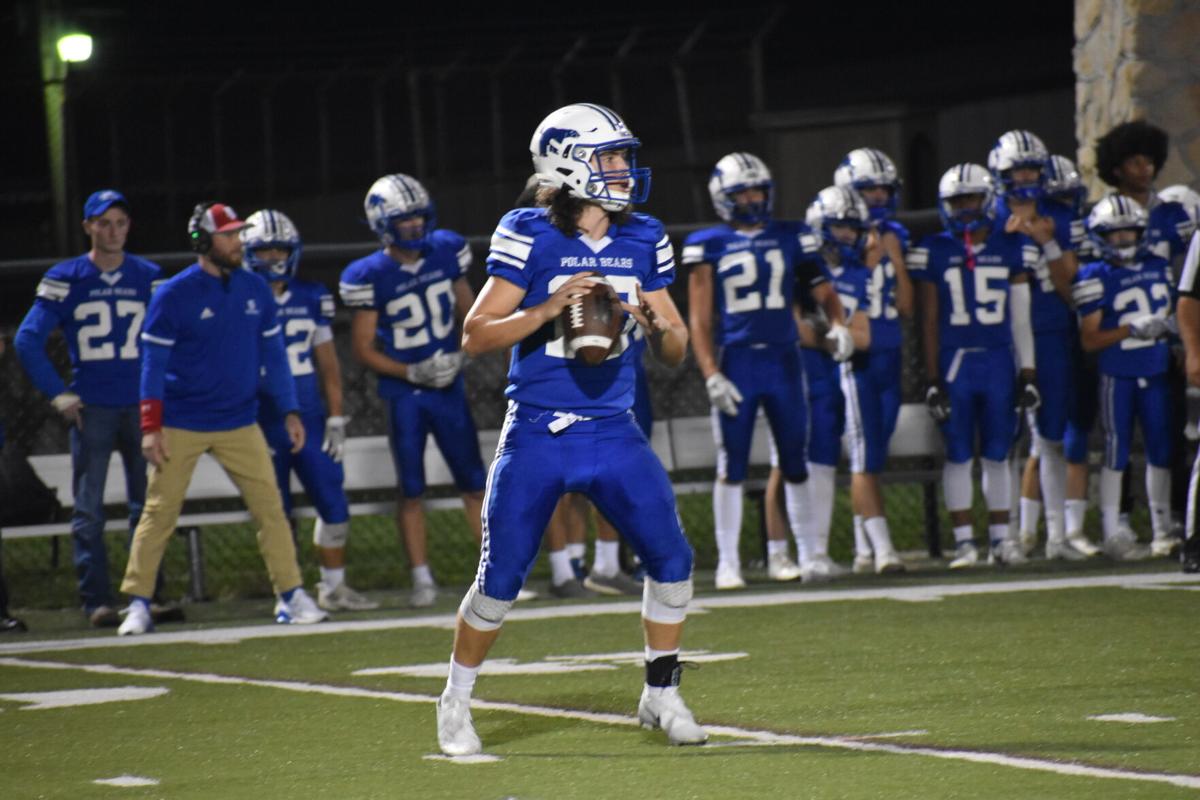 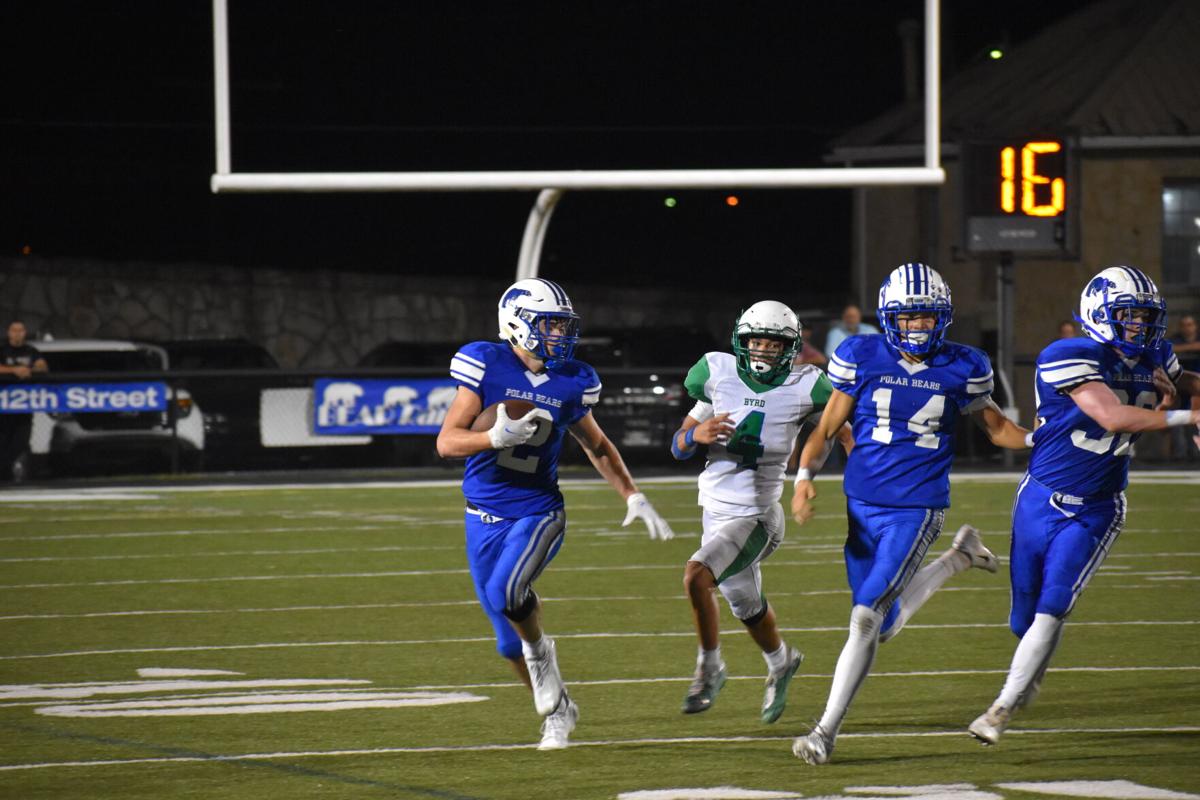 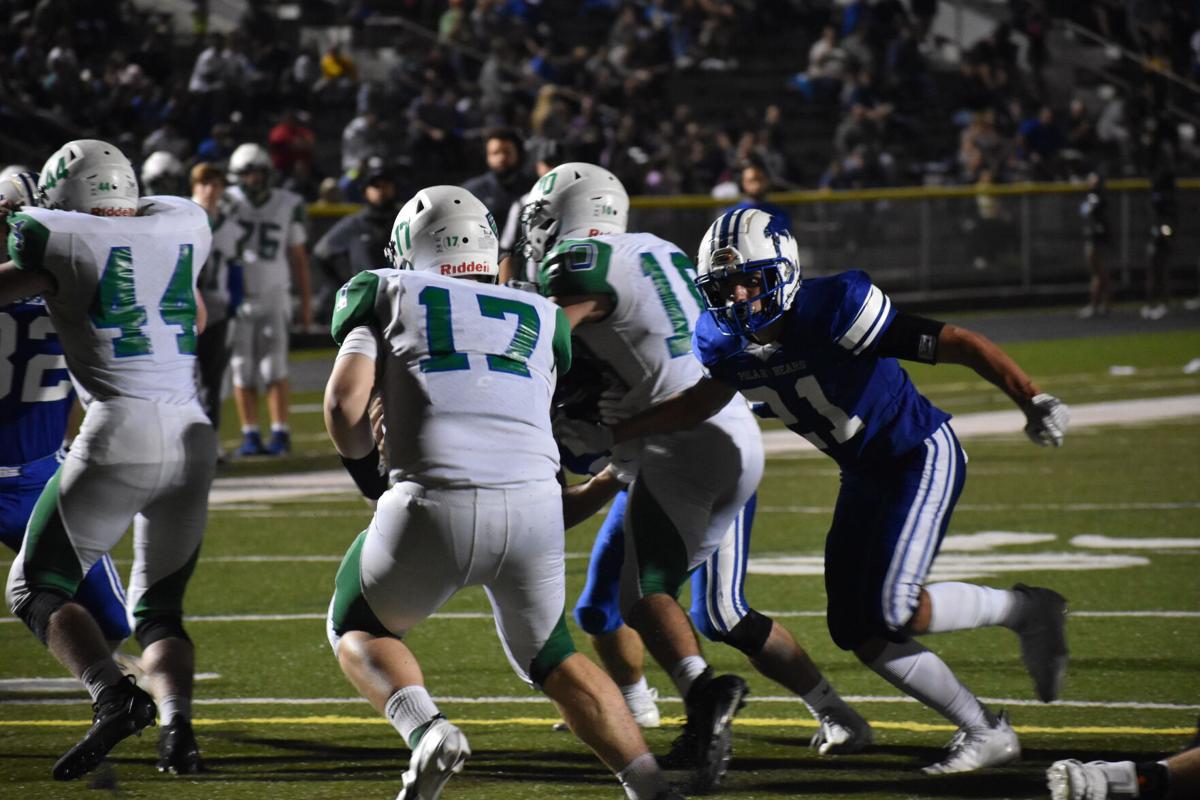 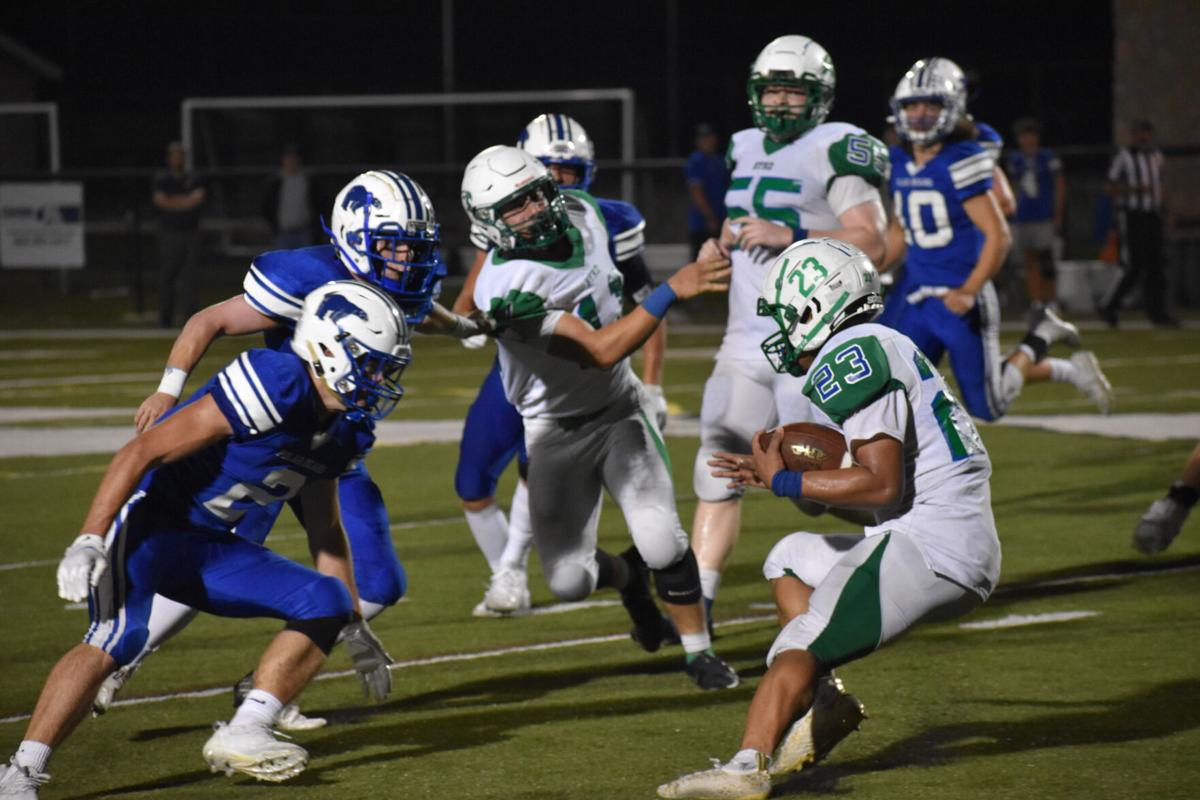 Fairmont Senior’s Germaine Lewis shrugs off a tackle during a rush vs. Robert C. Byrd.

“Absolutely,” Bartic said. “Our guys knew that going in.”

Playing in their first game in more than two weeks after members of the team were put under COVID-19 quarantine, Fairmont Senior (3-3) gutted out a 21-20 victory Friday over the visiting Robert C. Byrd Eagles (3-3).

After two road losses to Bridgeport and University, Bartic talked about seeing if his team could handle adversity. The Polar Bears had that opportunity early on in the night.

After giving up an almost 40-yard run by Byrd’s Jeremiah King on the Eagles’ first drive, Fairmont Senior clamped down, with Koby Toothman combining with Eric Smith for a sack, and Germaine Lewis and Smith combining for another the very next play.

The Polar Bears fumbled on their ensuing drive, but the defense once again showed up, stopping the Eagles a yard short on a 4th-and-eight at Byrd’s 37 yard line.

Both teams would punt the ball the next two drives as the night was shaping up to be a defensive battle. The contest remained scoreless after one quarter.

Less than a minute into the second quarter, Germaine Lewis appeared to run into a mess of bodies for a small gain on an inside handoff. But the tailback has made a habit of piling up big plays off second efforts this season, and just as it seemed the referees were reaching for their whistles, the junior spun out of the pile, and outran the rest of the Byrd defense for a 51-yard touchdown. Fairmont Senior led 7-0 with 11:22 to go in the second.

An impressive return let the Eagles start their drive in Polar Bears territory, but after an Eric Smith tackle for loss prompted a fourth and nine, Fairmont Senior once again forced a turnover on downs, converging on a receiver out of the backfield who caught a swing pass.

Before long, Lewis was back in the end zone, this time showing his talents as a receiver, reeling in a pass while running a wheel route and taking it 64 yards for a touchdown.

Lewis finished his day with almost 200 yards from scrimmage — 122 rushing on 8.1 yards per carry, and 70 receiving on two catches — as he was responsible for all of the Polar Bears’ touchdowns Friday.

“The offensive line did a good job of controlling the line of scrimmage when they needed to, and Jiggy Lewis had an incredible game,” Bartic said.

“[Dom] Stingo made the right reads and calls when he needed to, able to put us in position on a few of those. Ultimately, the O-line allowed [Lewis] to be in position to make those plays, and receivers also did a great job of blocking downfield to make those runs happen.”

Byrd wouldn’t be held off the scoreboard for much longer. The very next drive, Eagles’ running back Jeremiah King ripped off a 56-yard touchdown on an iso with 5:48 to go in the half.

Fairmont Senior tried to key in on the run, often pinching their line and loading the box. Though the Polar Bears did bring King down in the backfield multiple times, Byrd fed the senior runner 36 times, and Harrison County’s all-time rushing leader still got his, totaling 262 yards rushing and two touchdowns.

“It’s the No. 1 priority,” Bartic said of stopping the run game. “And we did that accept for probably one or two big runs. Killers on those, those were correctable things that we felt we should’ve been in position there. And then obviously, King is the real deal. You can line up correctly — you still have to tackle him. He’s the kind of guy that’s going to break tackles, you have to gang tackle. He was priority one, and we did enough to win.”

Explosive plays from Lewis and sophomore receiver Jayden Cheriza brought the Polar Bears to the six yard-line as the half dwindled away, but Byrd’s Latrell Jones came up big, stepping in front of a crosser in the end zone for an interception.

With a personal foul against the Polar Bears on the last play of the half being applied to the opening kickoff, Fairmont Senior tried for a surprise onside kick, to no avail. With great starting field position, King eventually tied the game at 14 with a two-yard score.

Byrd’s top weapon gave them the lead a short time later, bouncing a run to the outside for 48 yards and a touchdown, but there was a flag on the play.

A block in the back nullified the score, and after the Polar Bear defense forced yet another fourth down, the Eagles brought out the kicking unit for a 33-yard field goal.

The missed field goal kept the score knotted at 14. After unfavorable calls and unfortunate mishaps plagued the Polar Bears at times earlier in the season, this time Fairmont found themselves on the other side of things.

“We were good about giving breaks to other teams all season long, it’s nice to get one our way,” Bartic said. “It was a big battle all night, we had opportunities all night. [...] “You weather all that in games like this, big games, there’s a lot of pressure and each team is pressuring the other. Ultimately, you’ve got to try to take advantage of the other guys’ errors and we were able to do that.”

Fairmont Senior was not without their own mistakes Friday. After Lewis took the Polar Bears down the field and capped off the drive with a four-yard touchdown tote, Fairmont led 21-14 with 11:11 to go in the game. The Polar Bears looked like they were in control as Byrd lined up to punt on 4th and 17.

On the punt, Fairmont Senior roughed the kicker. First down Eagles.

The Polar Bears’ leading tackler, Michael Kruzel, got to King in the backfield to eventually bring up a third down, but King kept his team’s drive alive, as Eagles quarterback Nicholas George floated up a pass to him which he hauled in with a defender draped over him for 14 yards and a first down.

George eventually scored on a one-yard QB sneak, and Byrd was an extra point away from tying the game.

It was a refreshing change of pace for Fairmont Senior, who had struggled to make extra points themselves before Trey Longwell went three-for-three Friday. With multiple players who usually kick for the Polar Bears injured, Longwell stepped in Friday.

“He has taken it upon himself, he has really put in extra time and focus on it this past month,” Bartic said of Longwell. “Coming in, I told him “You’re going to get at least two. Even if you miss one you’re going to at least get two. Tonight’s your night, make them.” And if you told me a couple weeks ago we’re going to make three extra points to win the game, I don’t know if I would believe that was going to be the case. But he accepted the challenge, that is an incredible job by him, confidence, takes a lot of guts.”

All The Polar Bears had to do was get a first down to seal the game. Yet, after a botched snap and two runs, they faced a fourth and four. Bartic kept his offense on the field, hoping Stingo could draw Byrd offsides.

On the first hard count, Stingo did just that. Five yard penalty, first down, and Fairmont kneeled out the game.

“Any time we play Byrd it’s going to be a big game,” Bartic said. “And there was obviously added incentive for us to try to get a win, that was not lost on us.”

Though not perfect, after two weeks on the shelf, Fairmont Senior came out and played one of their cleanest games to date. Holds and other penalties have haunted the Polar Bears throughout the year, but now, back at .500, the win could mean a turning of the page for Bartic’s squad.

“Last time out, we took it on the chin, we weren’t real disciplined against University,” Bartic said. “And things that we tried to shore up, we had to stew in that for almost three weeks. To get back out and just play, I think that was the biggest thing that helped us out in terms of flow, just playing again.”

Next Friday, the Polar Bears face Spring Valley (4-3) in a rescheduled game that was originally supposed to be played on Oct. 8.