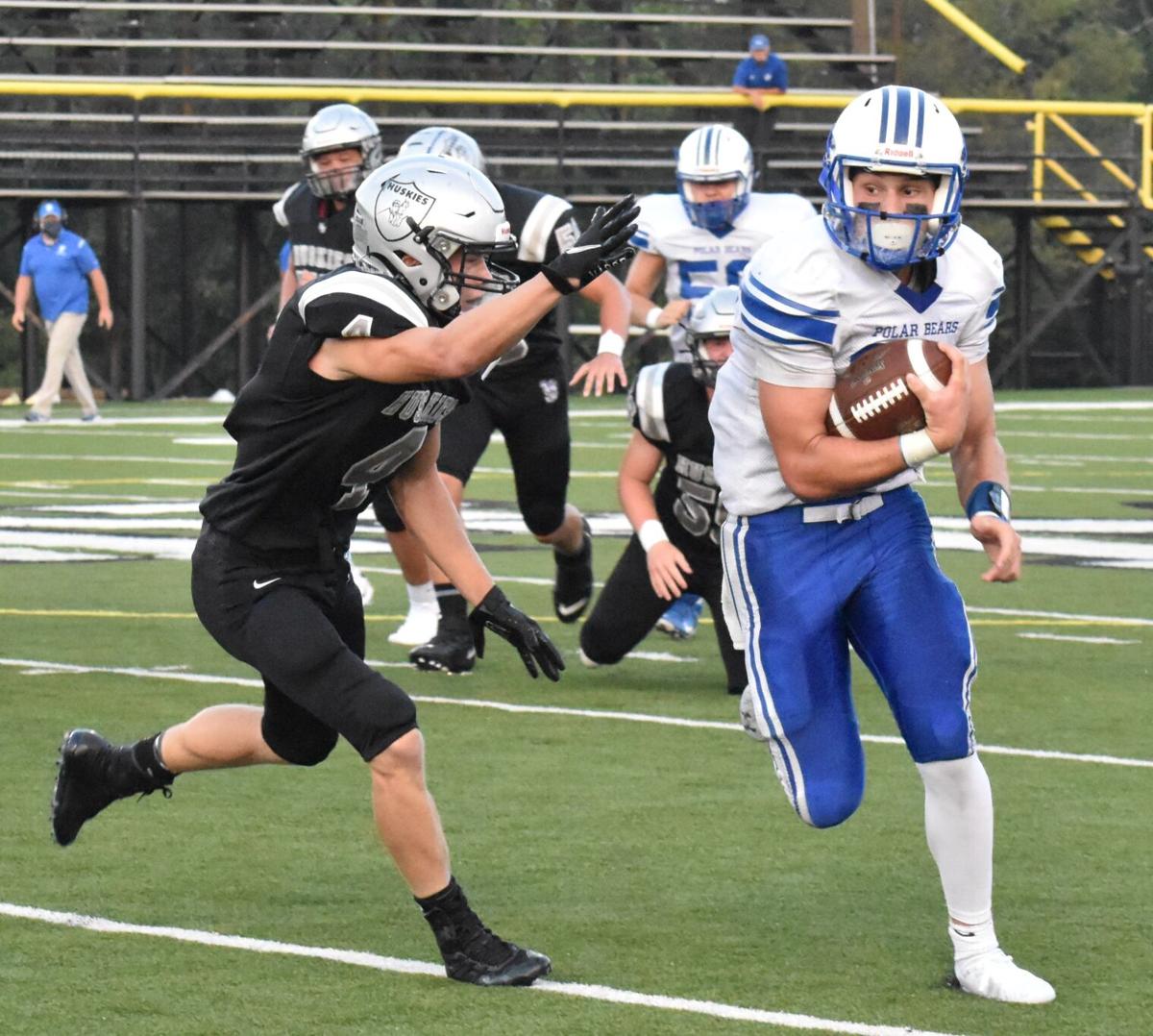 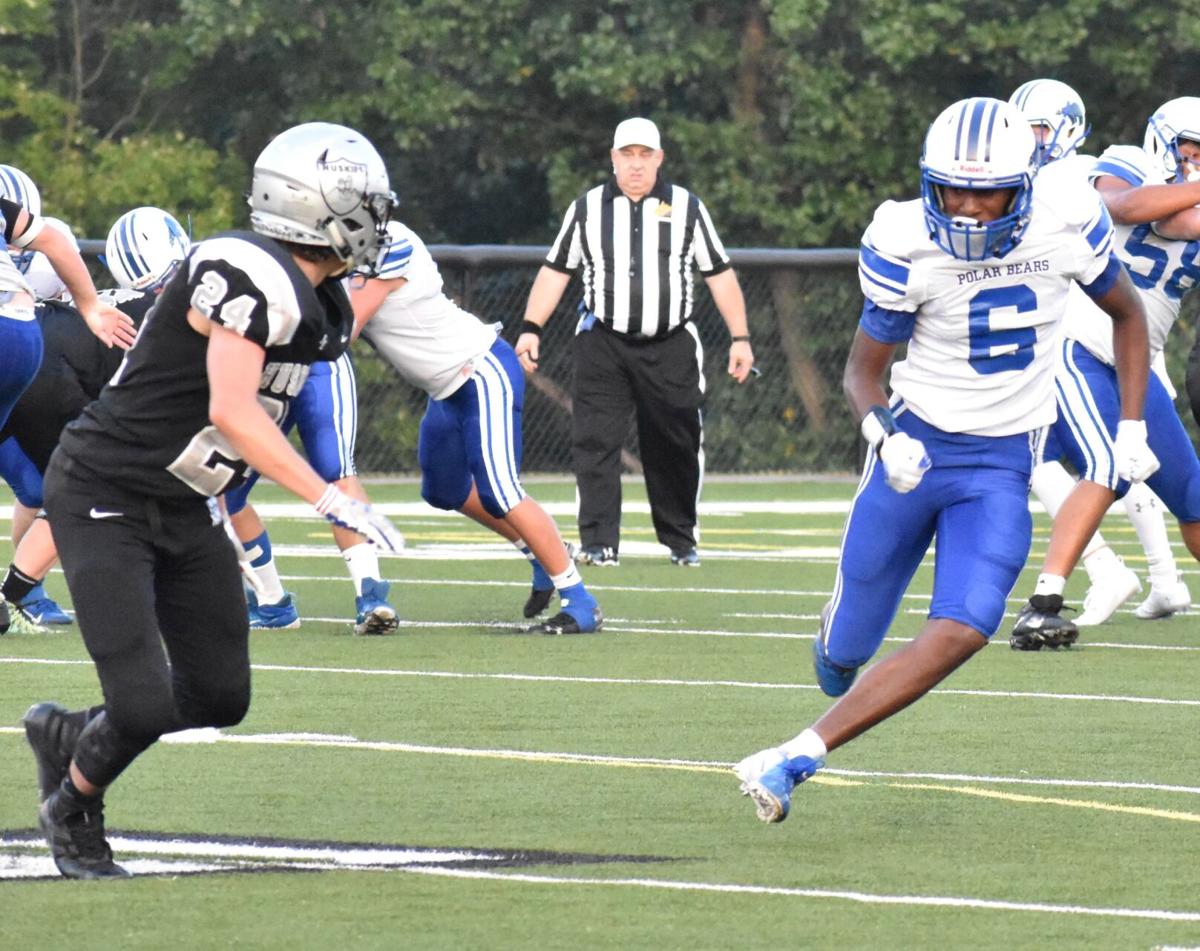 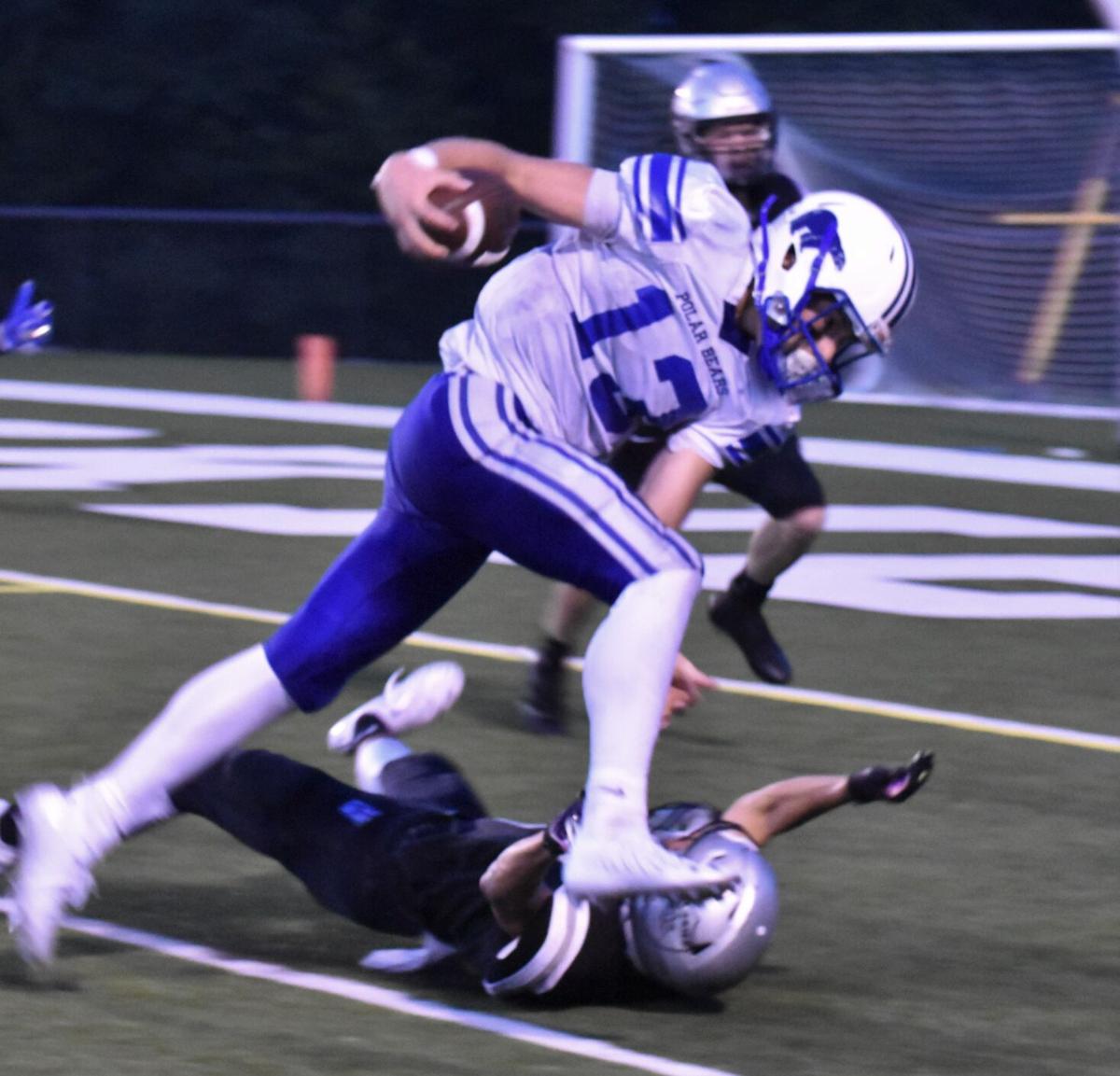 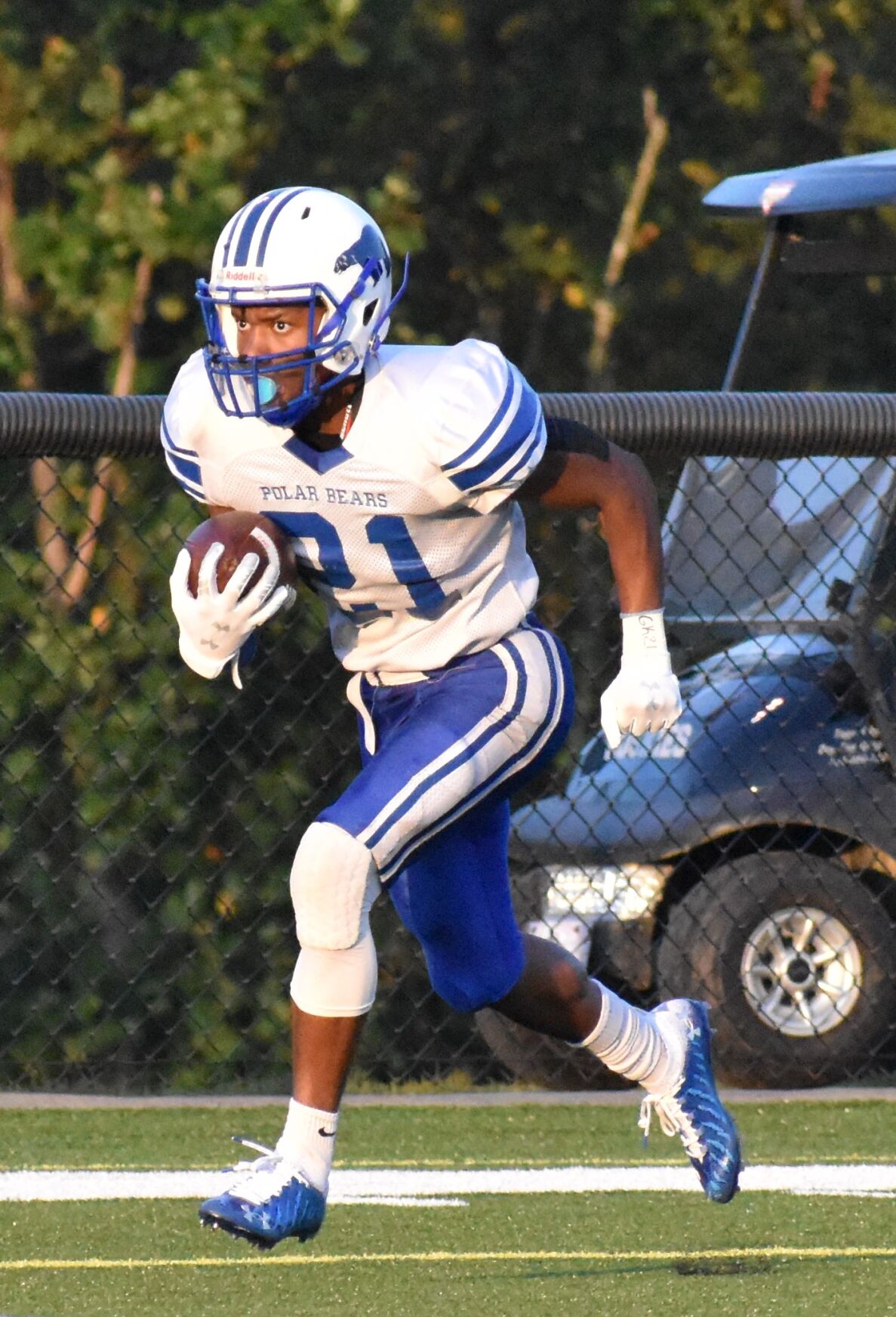 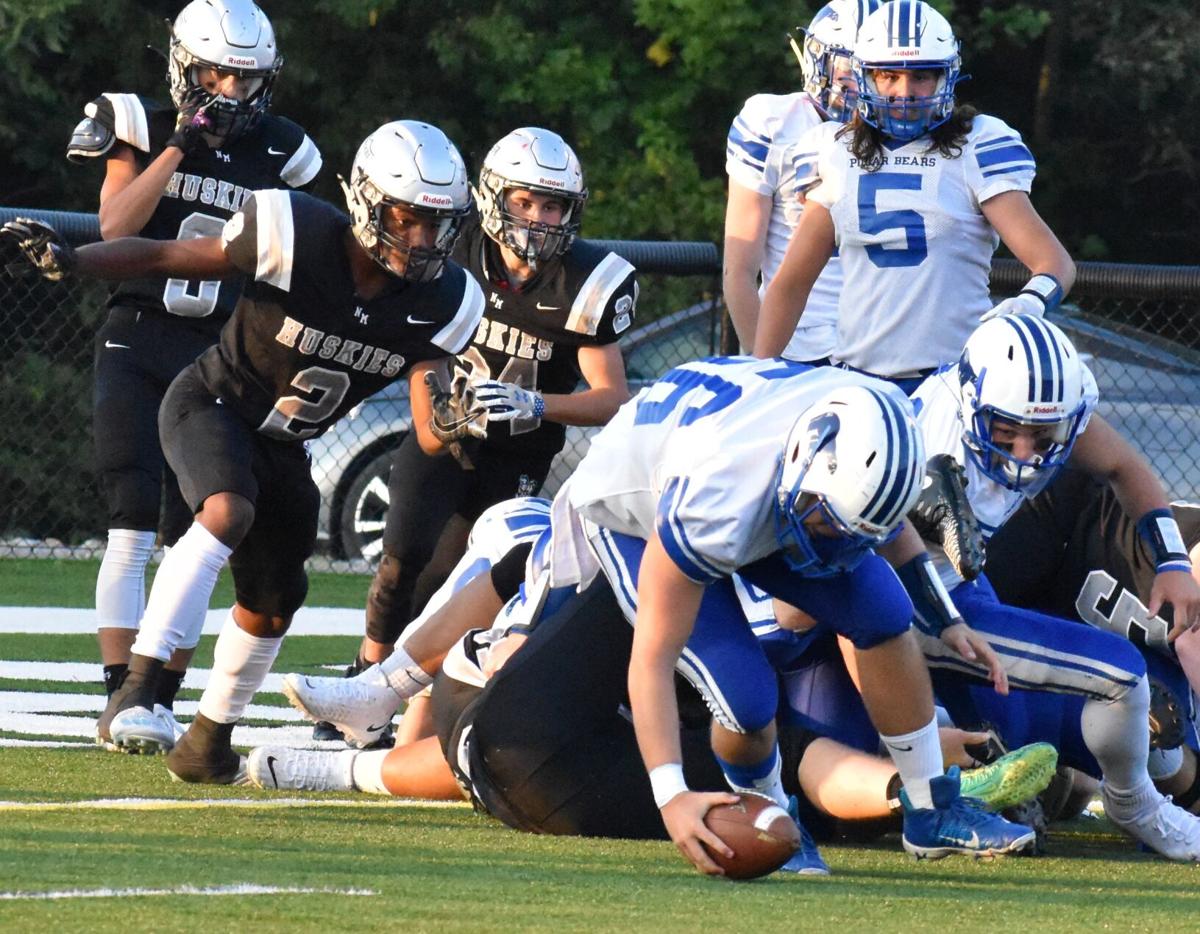 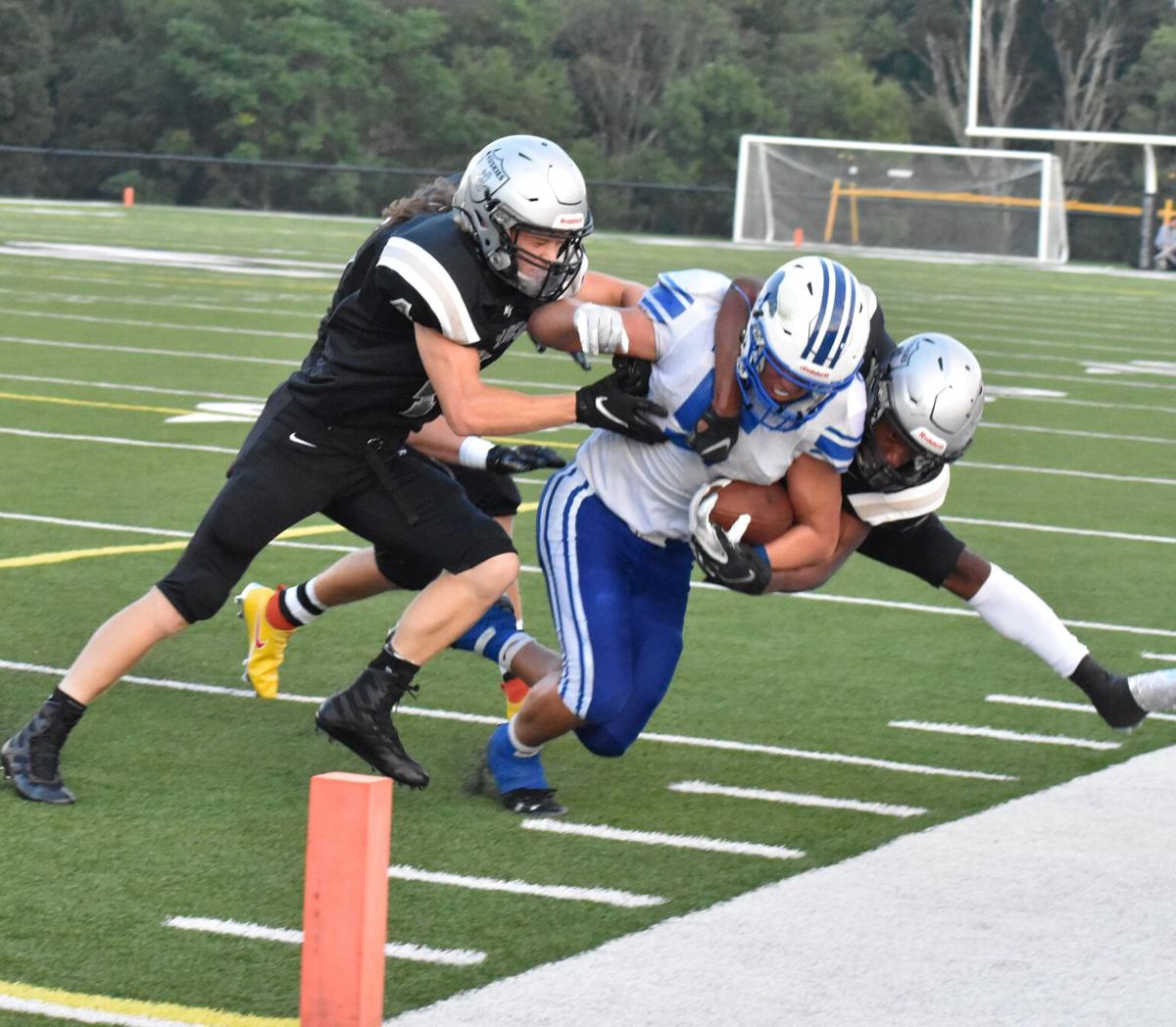 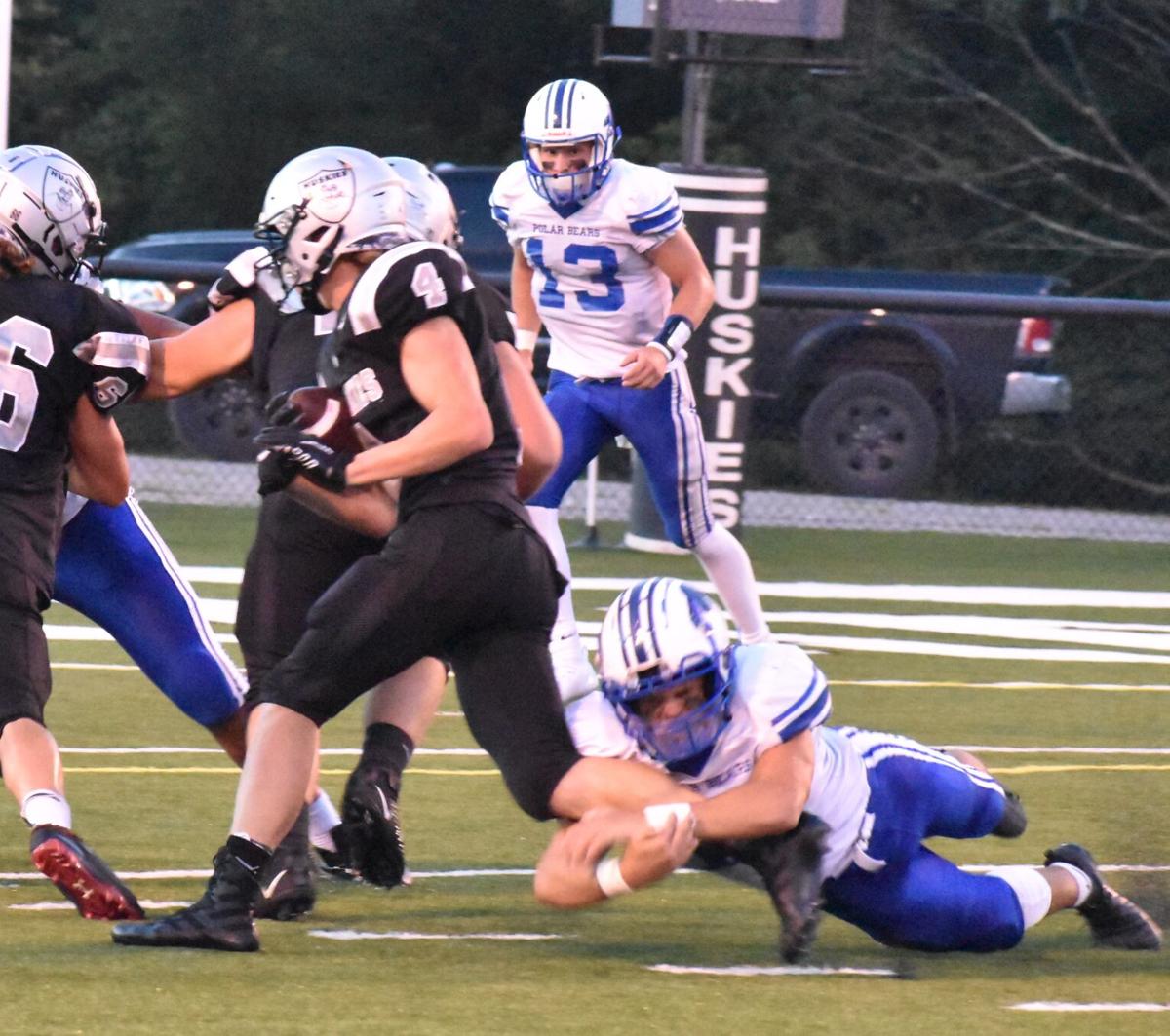 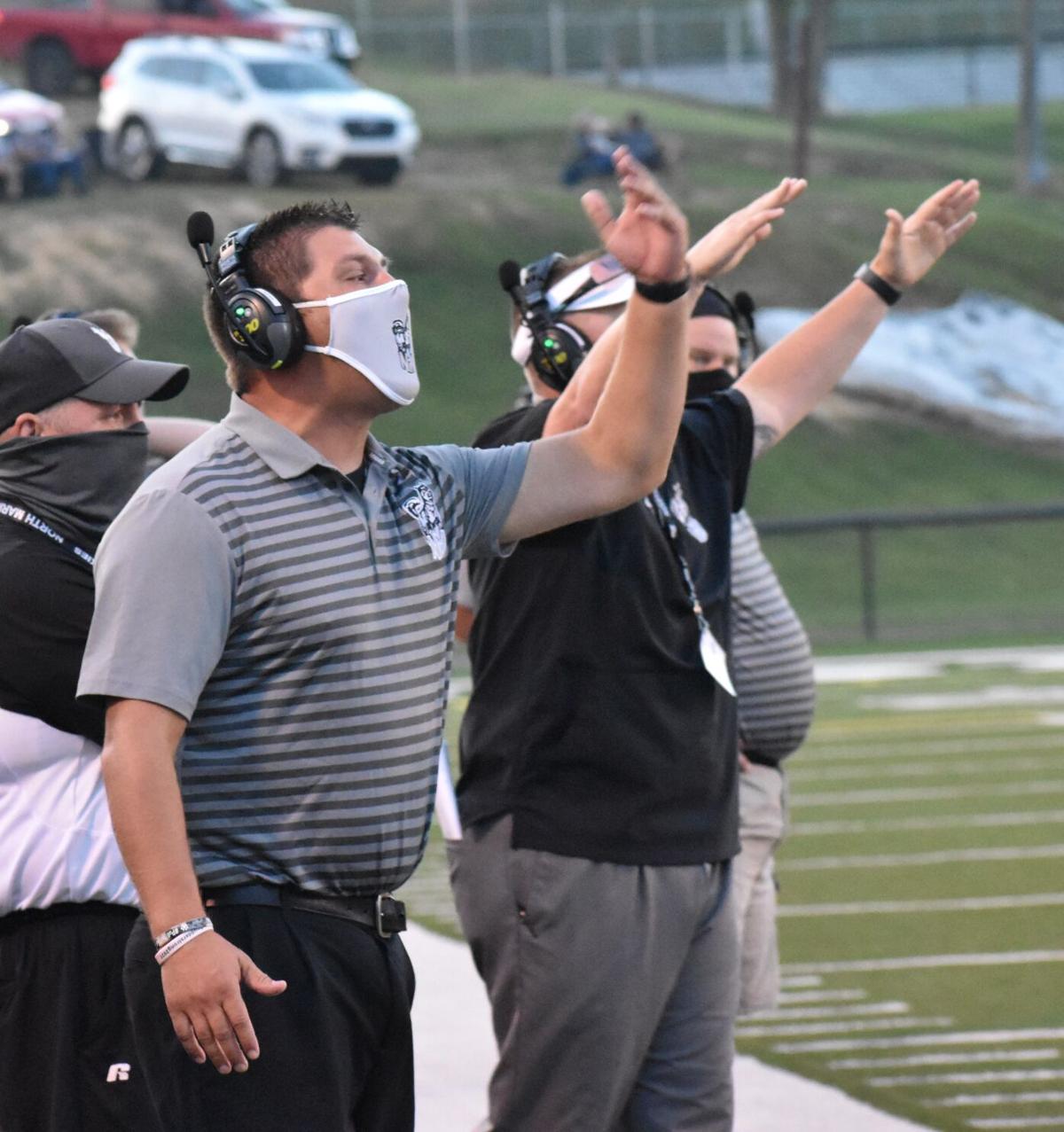 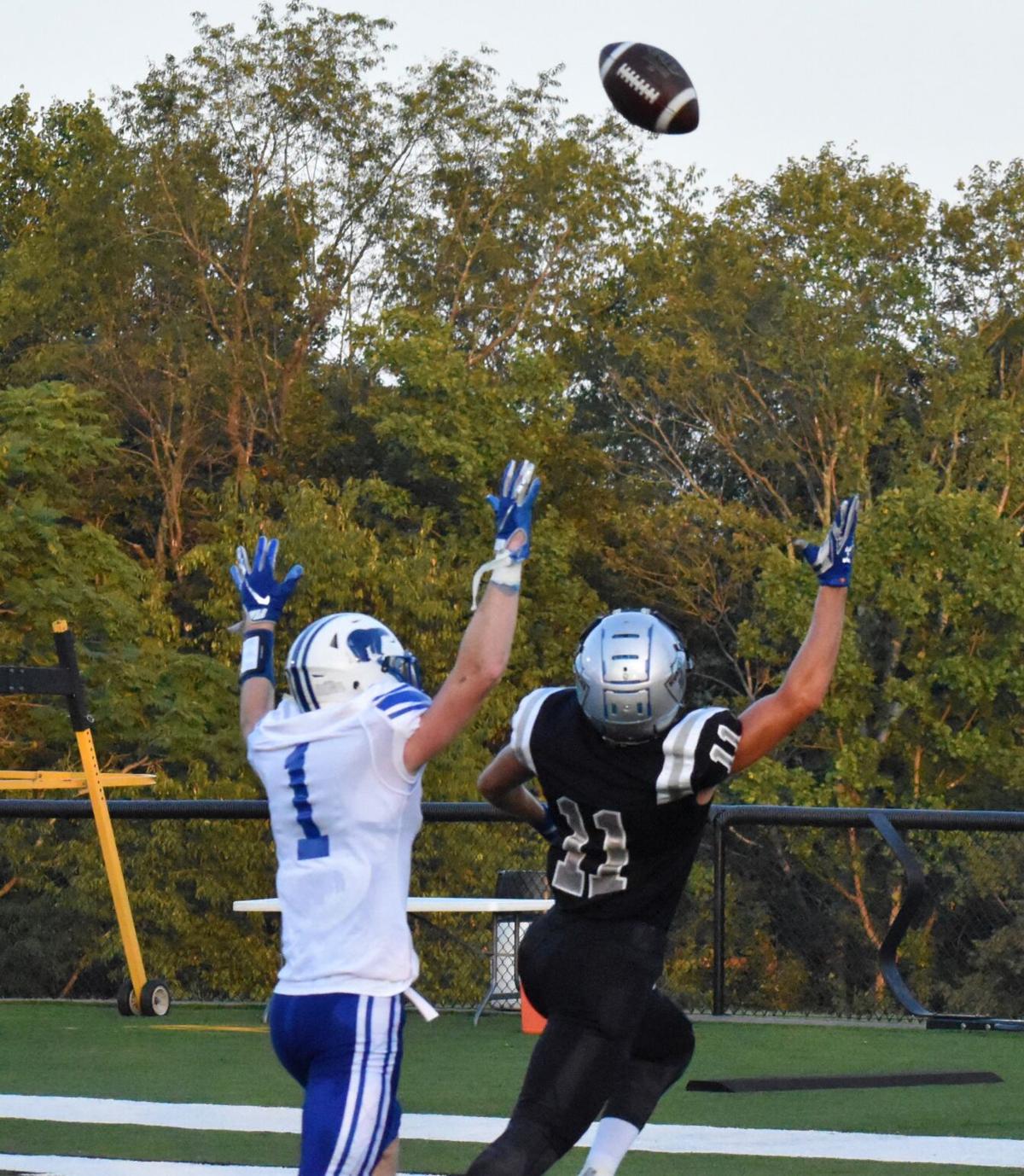 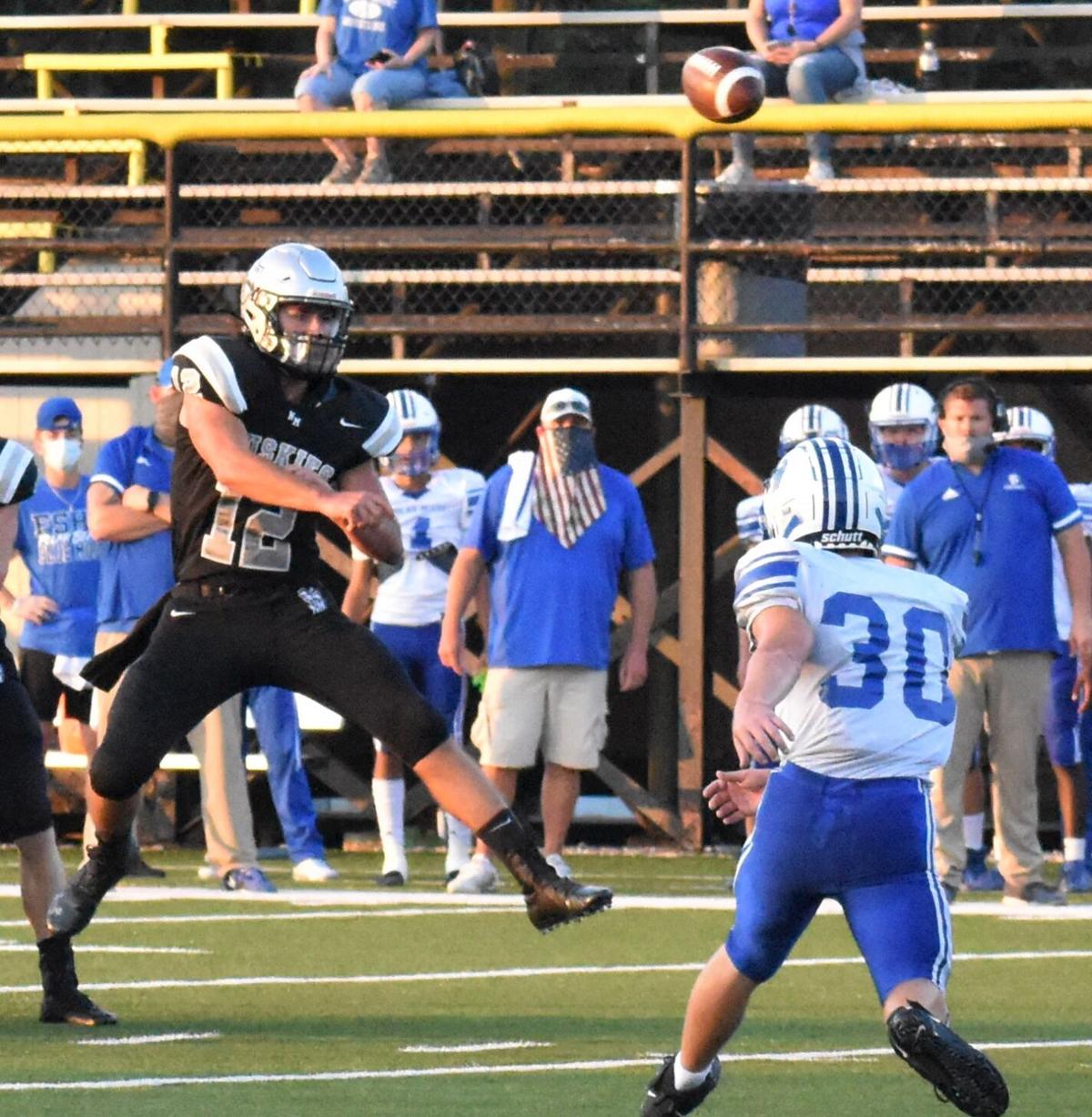 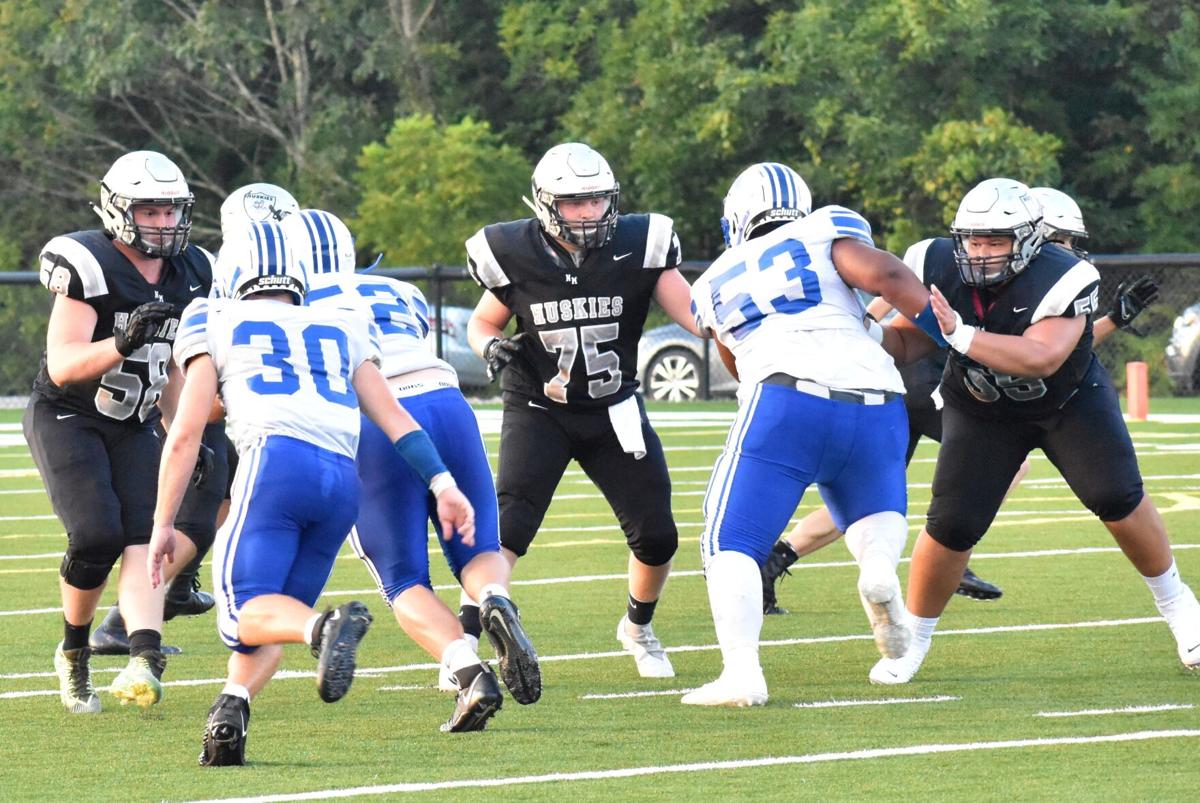 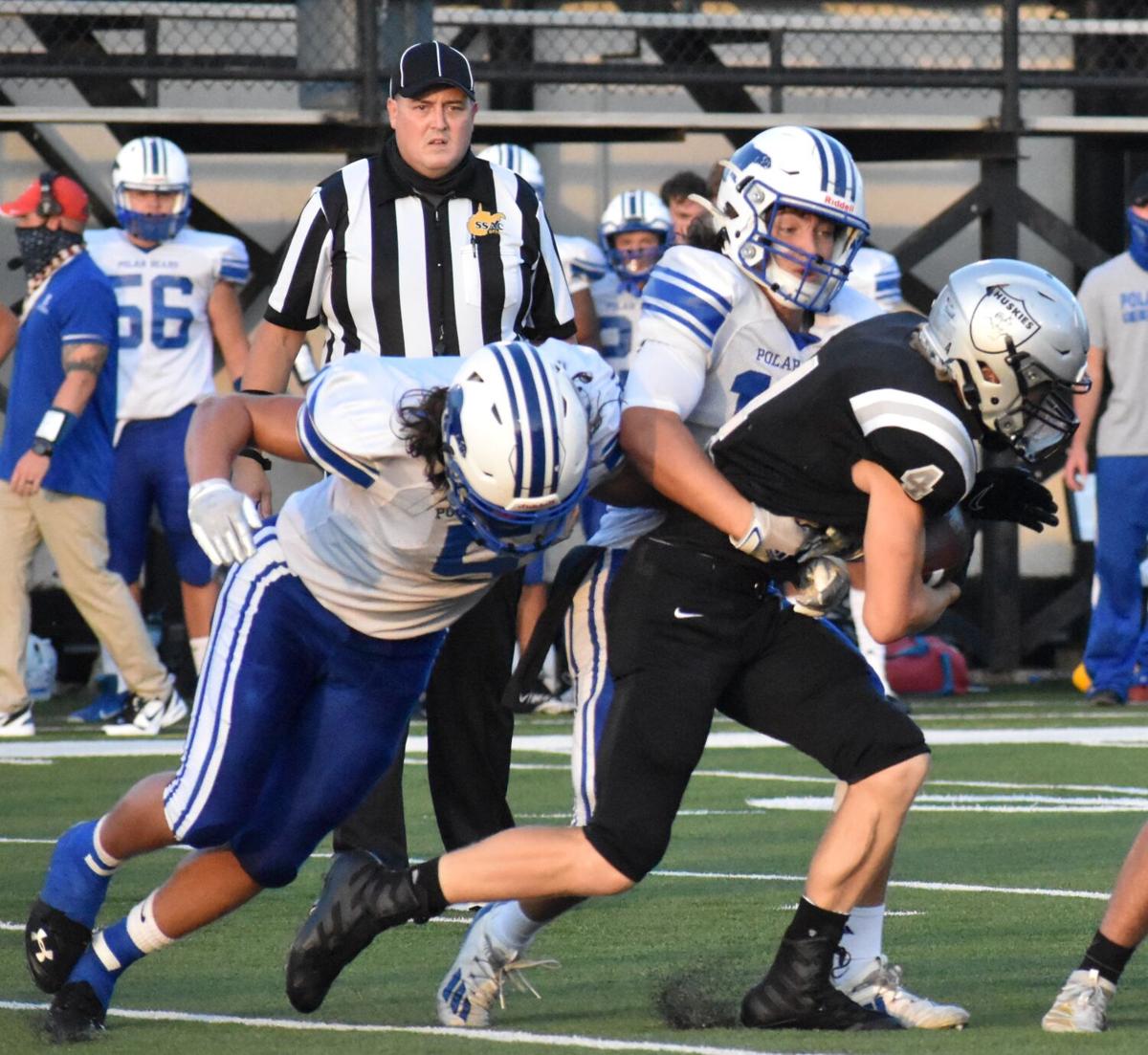 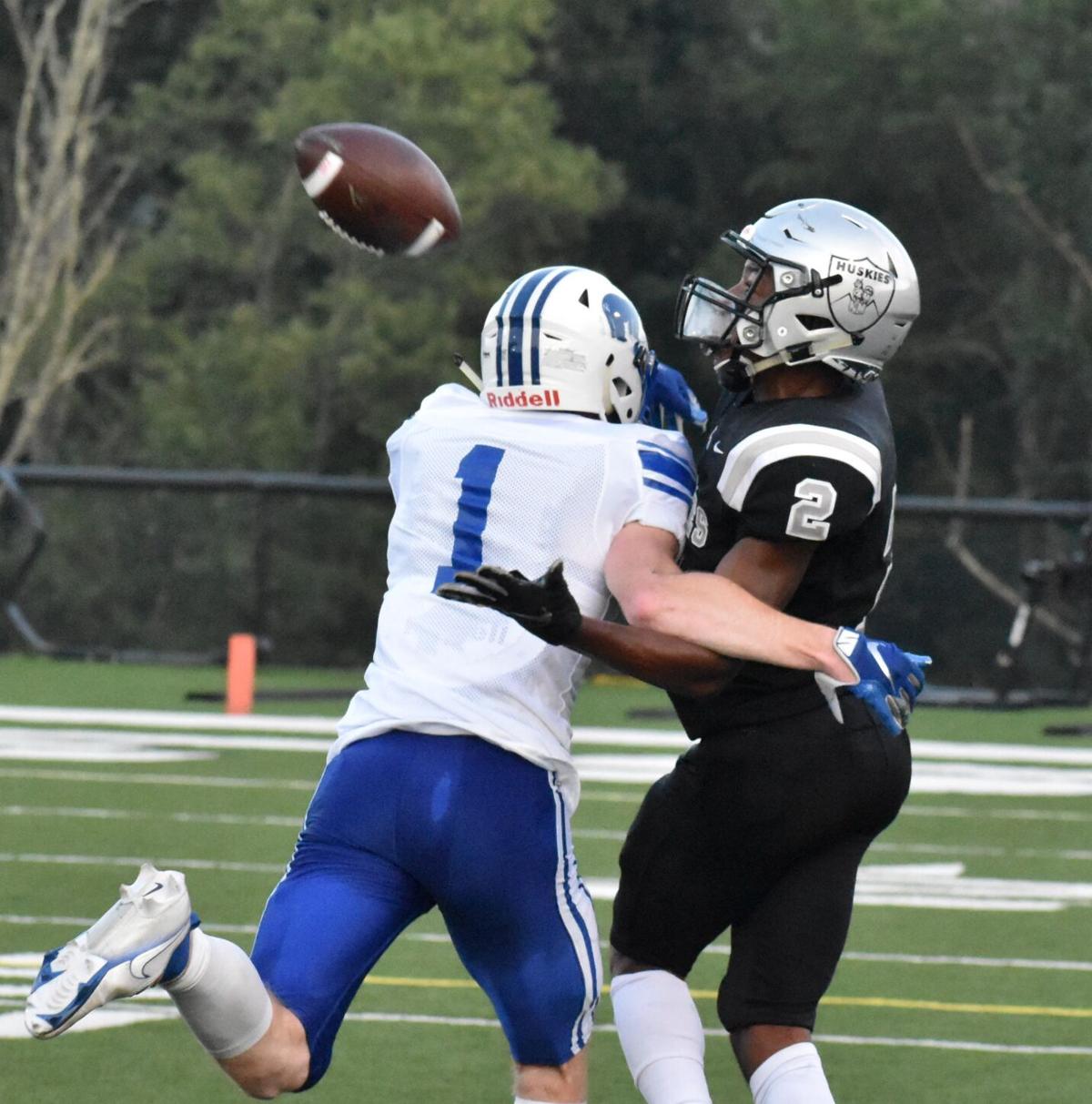 RACHEL — North Marion High took the field for its home opener undaunted by the challenge and unintimidated by the moment as arch rival and Class AA powerhouse Fairmont Senior came to Roy Michael Field. The Huskies, at long last in their series with FSHS, were armed with the physicality, dynamism and gumption to stand up to the Polar Bears’ might.

But being primed to compete is one thing, being primed to win is another, and for the Polar Bears, their competitive swagger and first-rate explosiveness aren’t touch-and-go matters, they’re ingrained cornerstones. They don’t wither and they don’t shake.

On Friday, it was that undeniable Fairmont Senior ethos that outlasted North Marion’s feisty and fiery start as the Polar Bears scored 29 unanswered points to defeat the Huskies 41-21 in Rachel and start their 2020 season with a win. The Huskies, meanwhile, fell to 1-1 after defeating Preston last week in their 2020 season opener.

“They’re a good and very capable team so this was the kind of game we expected, said Nick Bartic, Fairmont Senior head coach.

Fairmont Senior delivered a gut punch to North Marion on the game’s very first play when senior running back Kieshawn Cottingham weaved in and out of lanes to take the opening kickoff back 93 yards for a touchdown and a 6-0 lead. But the Huskies responded right back and held a 21-12 lead early in the second quarter.

Then, the Polar Bears, behind star senior quarterback Gage Michael, kicked it into high gear and took it to North Marion as they scored touchdowns on three of their next four drives and held the Huskies’ offense scoreless for NMHS’s final eight series.

Michael ripped the Huskies with his legs and torched them with his arm as he shook off a red-zone interception early in the second quarter and piled up 222 pass yards, 237 rush yards and four total touchdowns to power the Polar Bears.

“To any kind of challenge or any kind of setback Gage is going to respond well,” Bartic said. “That’s why he is who he is.”

As a runner, Michael gutted North Marion with QB isos up the middle and keepers off tackle, accumulating his 237 rushing yards and four rushing TDs on just 15 attempts. And as a passer, he spurned the Huskies with deep shots and bullets over the middle as well as quick-hitting comebacks and out routes as he went 13-of-21 to amass his 222 passing yards.

“All week we worked on getting the rush from our interior while our linebackers tried to keep (Michael’s runs) on their inside shoulder to squeeze him and keep leverage on him,” NMHS coach Daran Hays said. “But the thing (Fairmont Senior) does a great job with is they run him everywhere on the field — they run him in the inside gaps, they run in the draw game, they run him in QB sweeps, they run him in QB isos, they do a lot of stuff with him. And obviously they got some great weapons on the outside and can throw it vertically as well.”

But before Michael and the FSHS offense strutted their top-tier, multi-dimensional capabilities, it was North’s well-versed offensive system operated by first-year starting quarterback Brody Hall that lit it up. Hall and the Huskies — in direct response to Cottingham’s potentially deflating kickoff return TD to start the game — were both precise and powerful early on. The NMHS offensive line of Chase Duckworth, McKel Brumfield, Logan Musgrove, Jake Cochran and Brock Troy asserted their will on the FSHS defensive front, junior wideout Tariq Miller showcased his game-breaking ability as one of the state’s emerging weapons, and Hall orchestrated the Huskies’ run-pass option game with a steady hand.

The Huskies scored touchdowns on three of their first four drives and gained 231 of their 343 yards of total offense in the first half.

“We came out offensively and I thought our line established themselves physically. I thought we moved the ball down the field with the run very well and I think that forced them to do some things and change some looks that we’re not accustomed to them doing to us — typically they’ve just lined up in their defense and beat us up the last couple of years — but they had to bring some heat and they had to adjust their fronts,” Hays said. “So we forced them to make adjustments, but they did a nice job with those adjustments.”

On the Huskies’ opening drive, Hall accounted for 62 of the team’s 77 total yards as he rushed for 37 yards and passed for 27, including a crucial 4th-and-8 hook-up over the middle to Cruz Tobin for 13 yards that kept things humming. On the next series, though, North Marion traded that steady churn of their first drive for a two-play lightning strike courtesy of Miller’s otherworldly talents; with Miller in 1-on-1 coverage on the outside, Hall uncorked a deep ball that Miller somehow reeled in for a 60-yard touchdown after reaching over the back of FSHS’s Alex Brophy to tip the ball to himself all while keeping his feet to race the remaining yardage.

“We had to adjust our matchups and our rotations on defense,” Bartic said. “They caught us not rotating as we needed to and we had to flip some assignments to counter their RPO stuff.”

The back-to-back scoring drives gave the Huskies a 14-6 lead, and just when it looked as though Michael and the Polar Bears offense was on the verge of erasing that lead completely with consecutive scoring drives of their own, Miller flashed more of his big-time play-making, this time on defense. With FSHS trailing 14-12 but Michael and Co. marching inside the NMHS red zone, Miller broke on a Michael pass and undercut the route to nab it for an interception in stride, returning it 77 yards from NMHS 10 yard-line to the FSHS 13 yard-line. Two plays later, NMHS made good on Miller’s pick when Hunter Kuhn scored on a two-yard plunge to make it a two-score game at 21-12.

From that point forward, however, Michael was borderline flawless, as he atoned for a Fairmont Senior offensive line still lacking in continuity as well as a couple of apoplectic second-half giveaways via a bad snap and a Cottingham fumble.

On the Polar Bears’ very next drive after the Miller INT, Michael accounted for all 68 yards before capping the drive with a 2-yard TD run. Then after an acrobatic Kayson Nealy interception gave the ball back to Fairmont Senior, Michael and Cottingham connected for gains of 15 and 26 yards before Cottingham finished the drive with an 8-yard touchdown run to propel the Polar Bears in front 26-21 with five minutes left in the half.

Hall and the Huskies broached retaking the lead just before halftime and on their opening drive of the second half with trips inside the red zone, but on both occasions, they came away skunked with no points to show for. On the first of the two red zone trips, a blitz by FSHS’s Germaine Lewis — who impressed throughout the night — resulted in a desperation throw away by Hall on fourth down. Then on the second march inside the FSHS 20 yard-line, Hall launched for the end zone on another fourth down and was picked by Nealy for the second time, with Nealy returning the INT 81 yards to the North 18-yard line.

Three plays after Nealy’s pick, Michael scored his third touchdown of the night to make it 33-21 in favor of the Polar Bears.

“We got to score in the red zone,” Hays said. “In the third quarter we turned them over with 10-and-a-half minutes left, and if we score on those two (prior) red zone trips, we’re driving to take the lead instead of driving down 20. That’s a huge difference in the game obviously.”

Thereafter, North Marion’s defense recovered fumbles on two occasions, with Cody Clevenger pouncing on a FSHS bad snap and Troy straight-up ripping the ball from Cottingham’s grasp for a fourth quarter takeaway. But even with the aid of the two turnovers, North’s comeback attempt was undone by a Fairmont Senior defense that rediscovered both their principles and their bravado.

Nealy ended the game with three INTs to lead the Polar Bears’ defense, while Nicky Scott tallied a team-high six tackles and a tackle for loss.

“Defensively, they had us off balance there in the first half, but then we made some adjustments and did a nice job in the second half,” said Bartic, whose Polar Bears limited NMHS’s offense to 112 yards after halftime, including a string of fourth straight series without a single first down.

For the day, North Marion’s offense gained 343 yards on 68 plays, with Hall completing 13-of-28 passes for 197 yards with a TD and three INTs and running 13 times for 63 yards. Miller led all receivers in the game with six catches for 106 yards and a score.