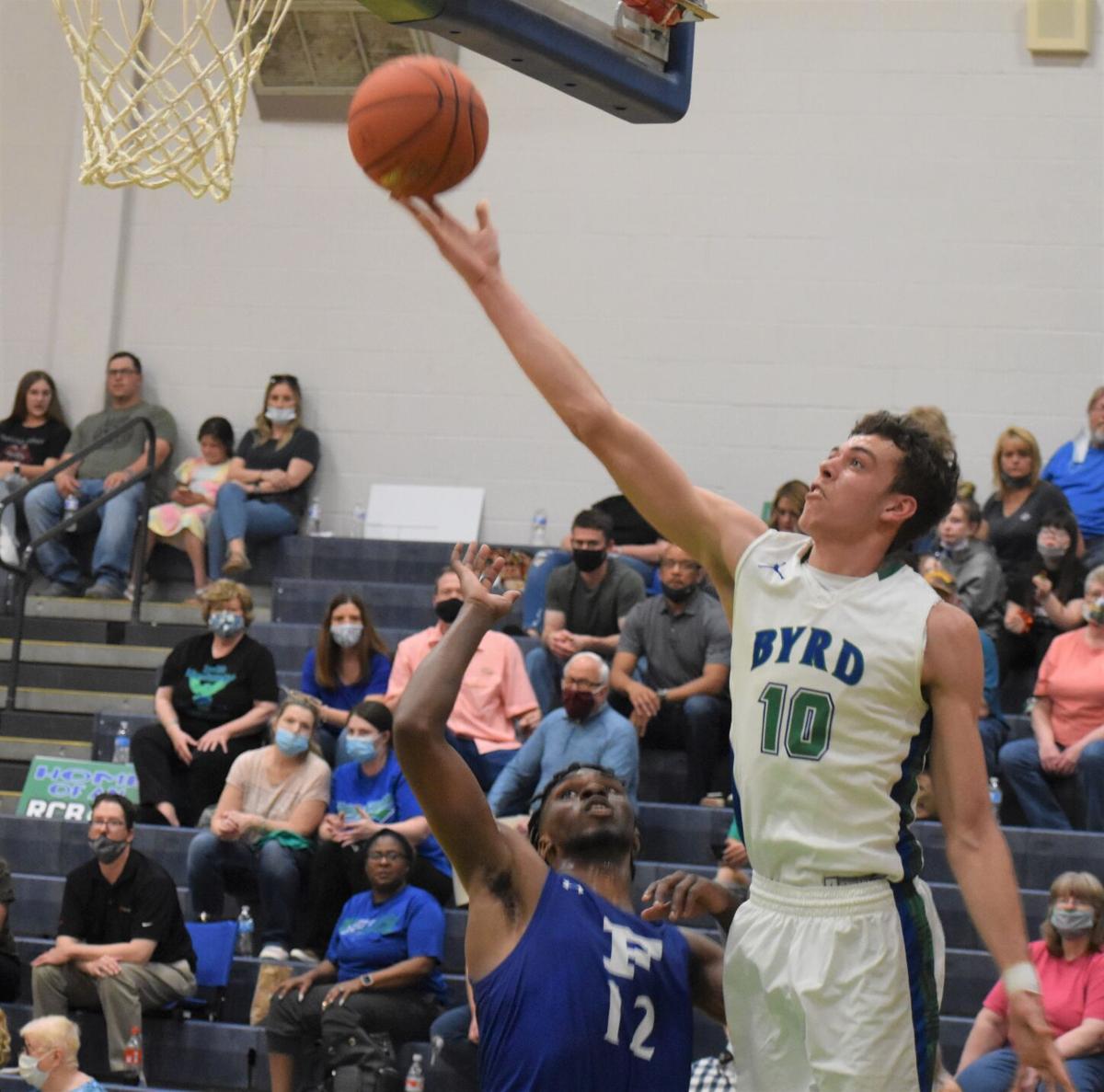 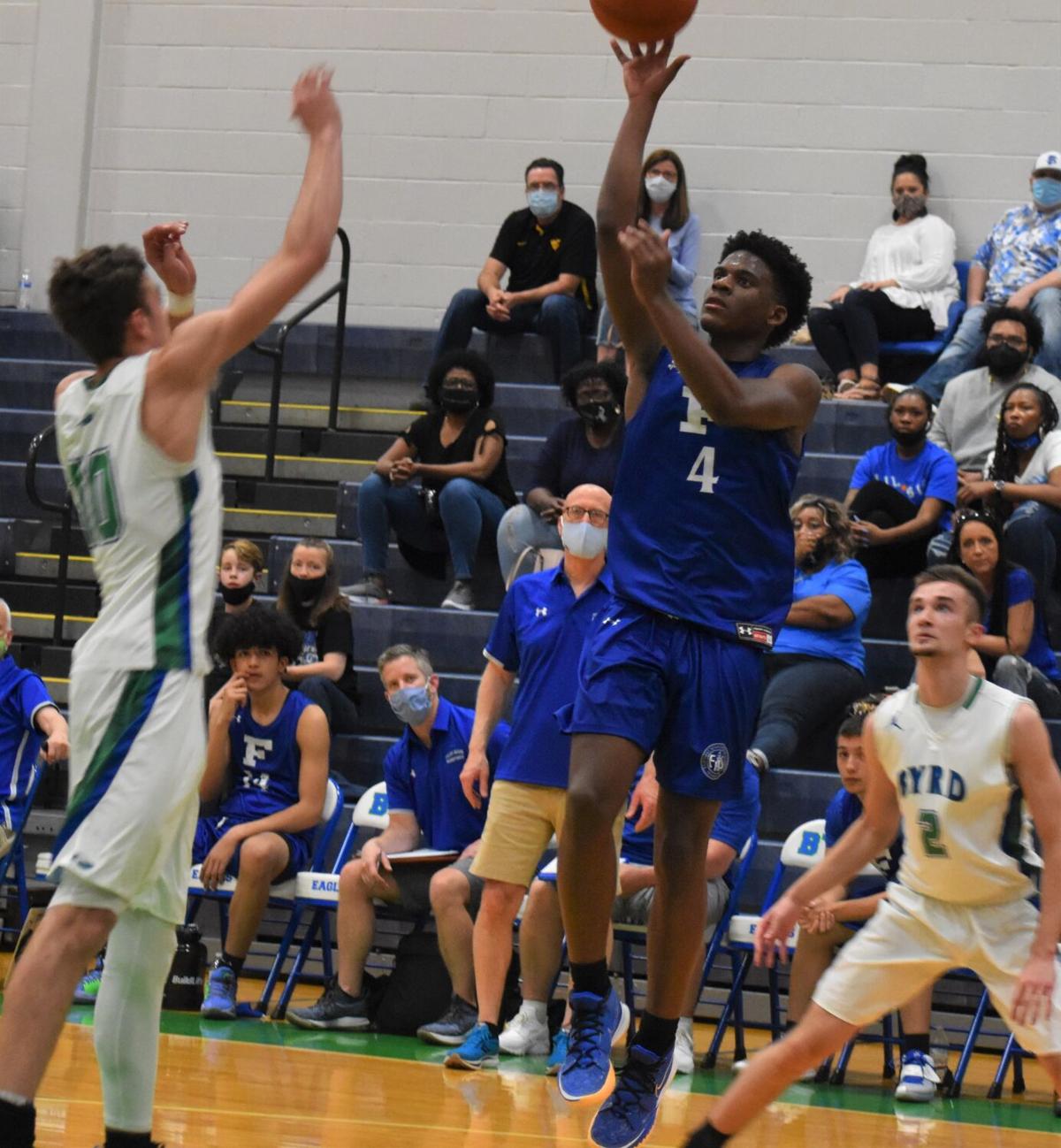 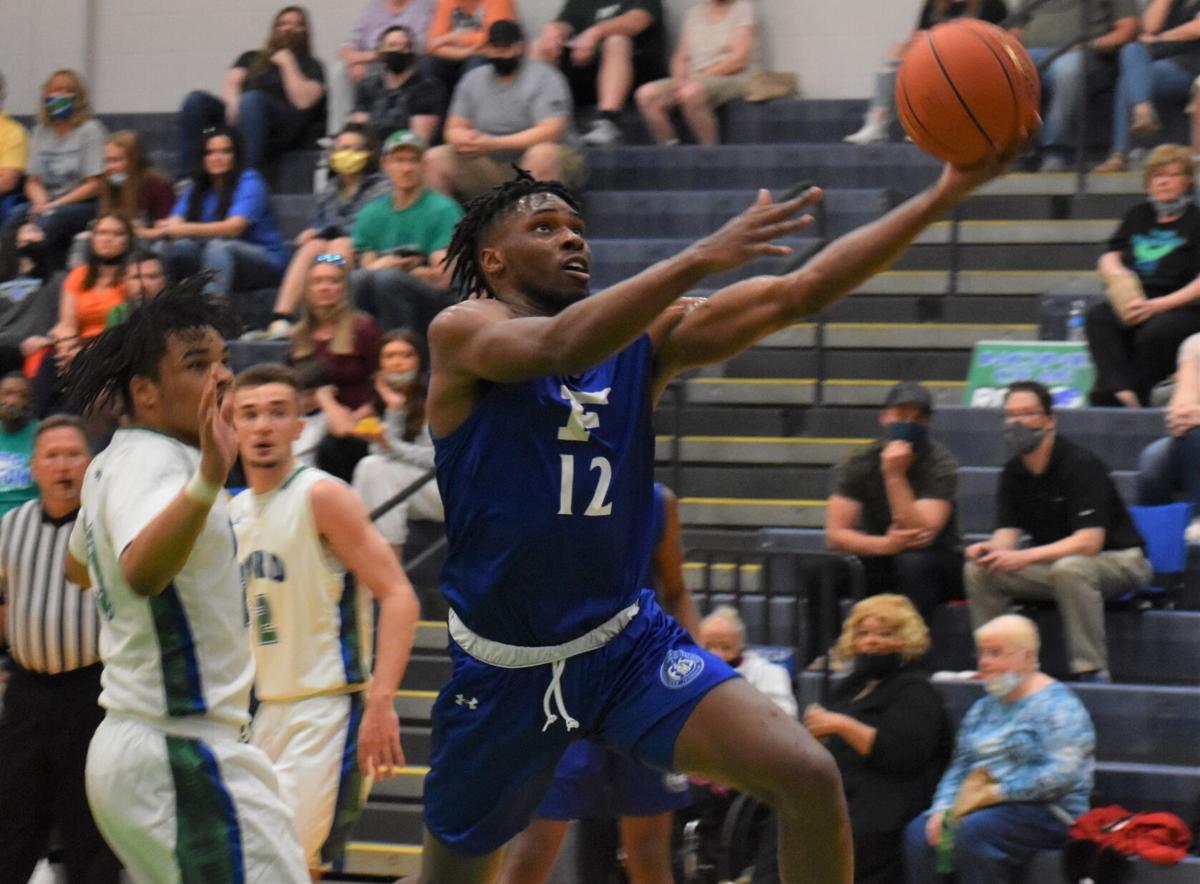 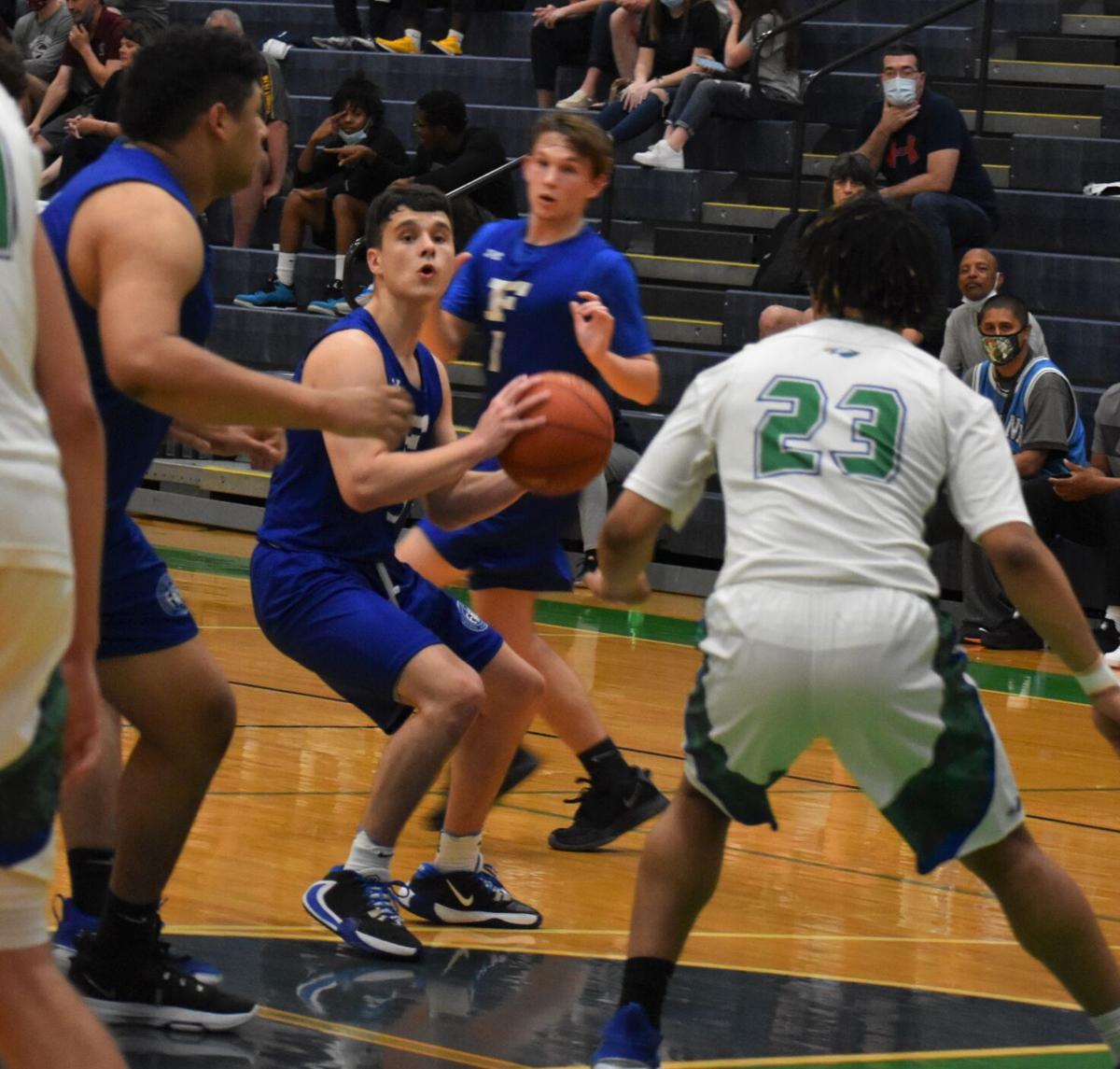 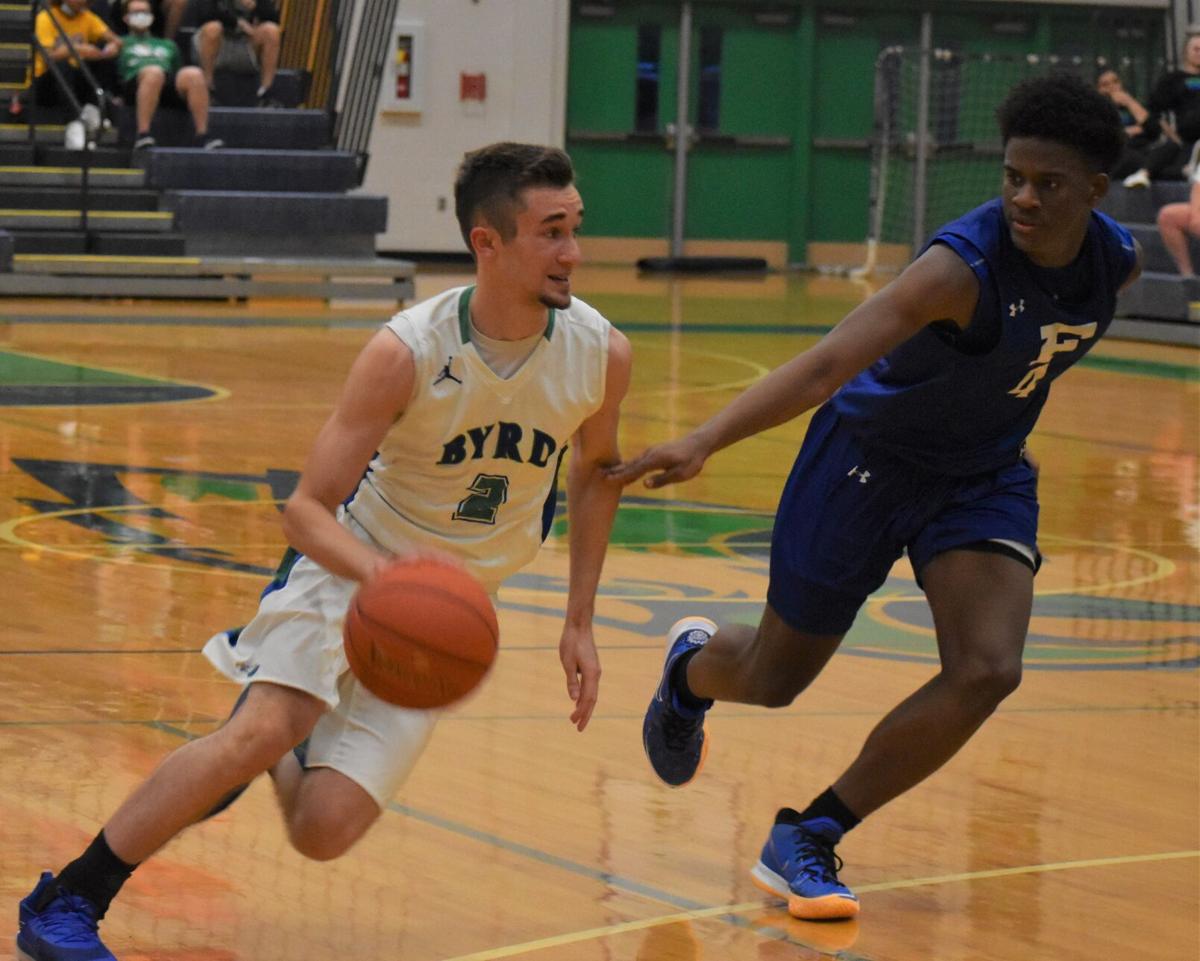 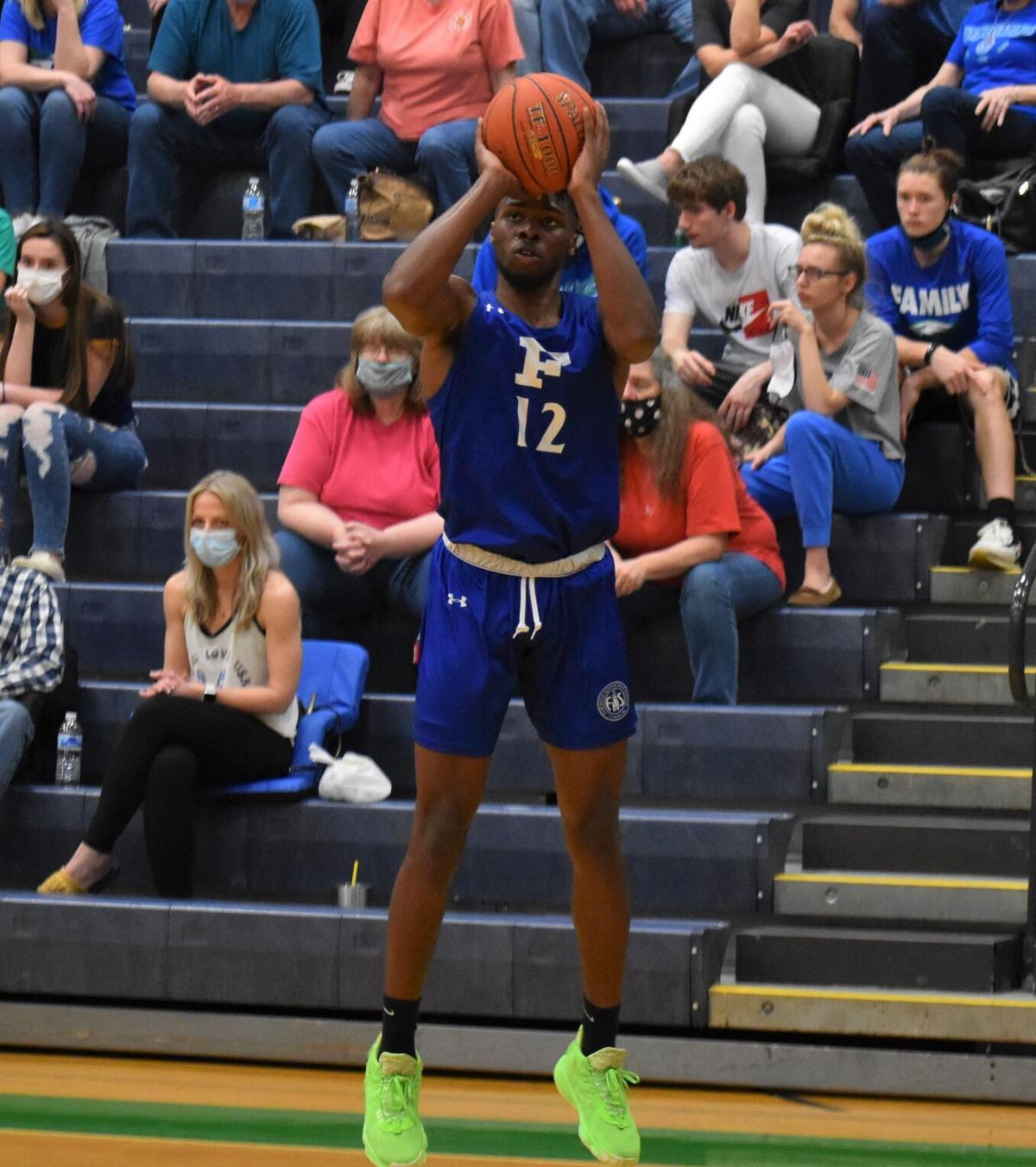 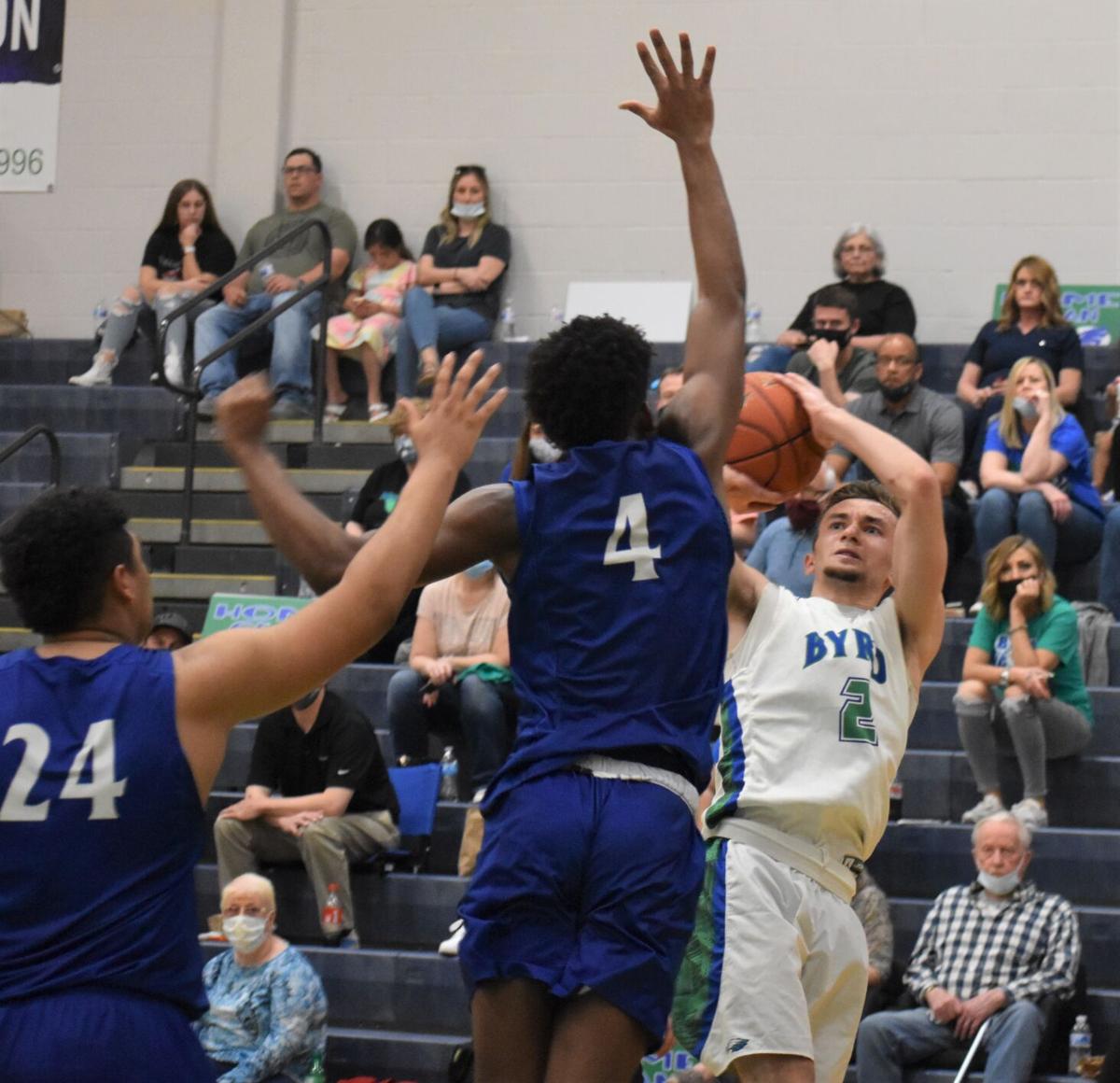 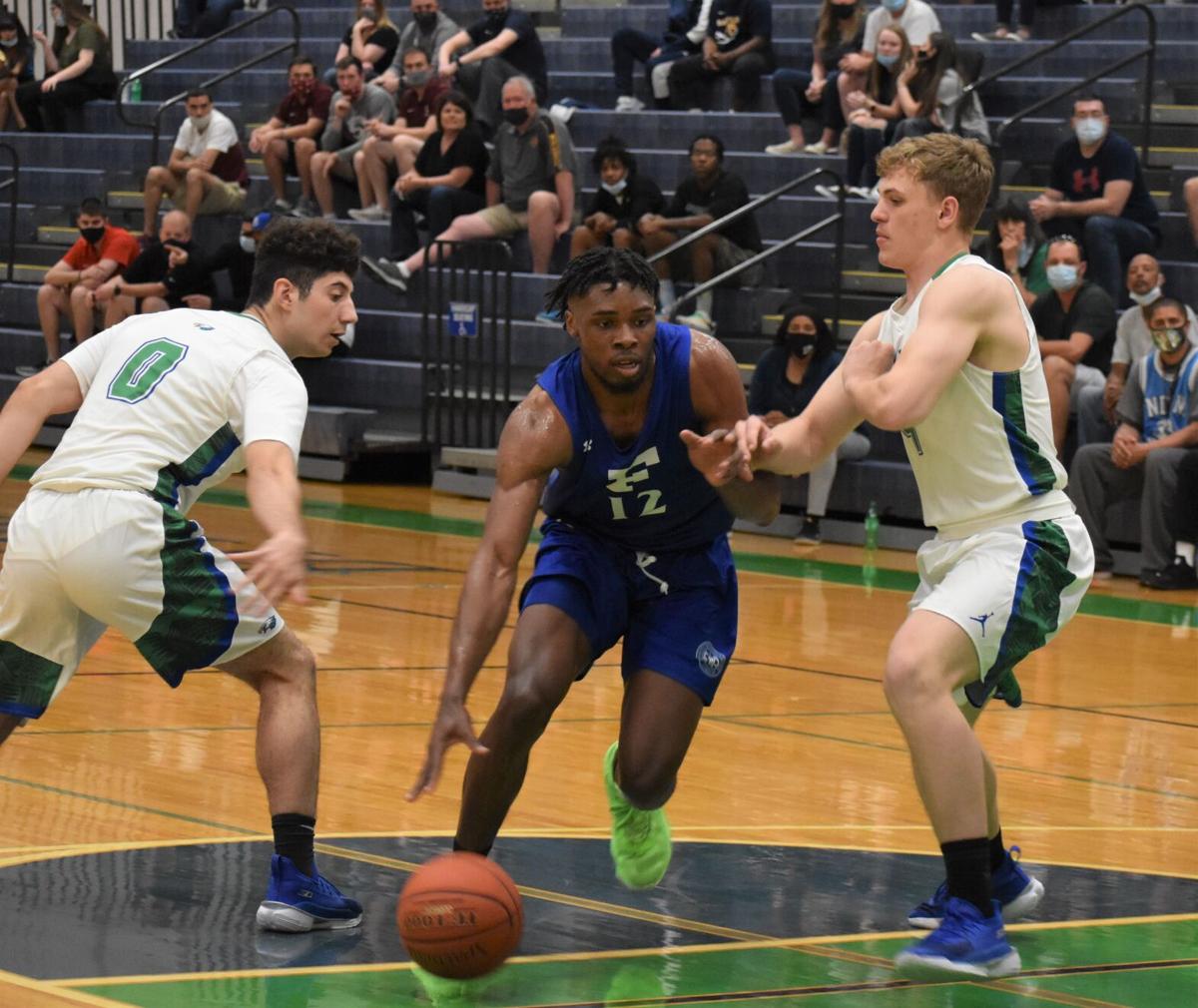 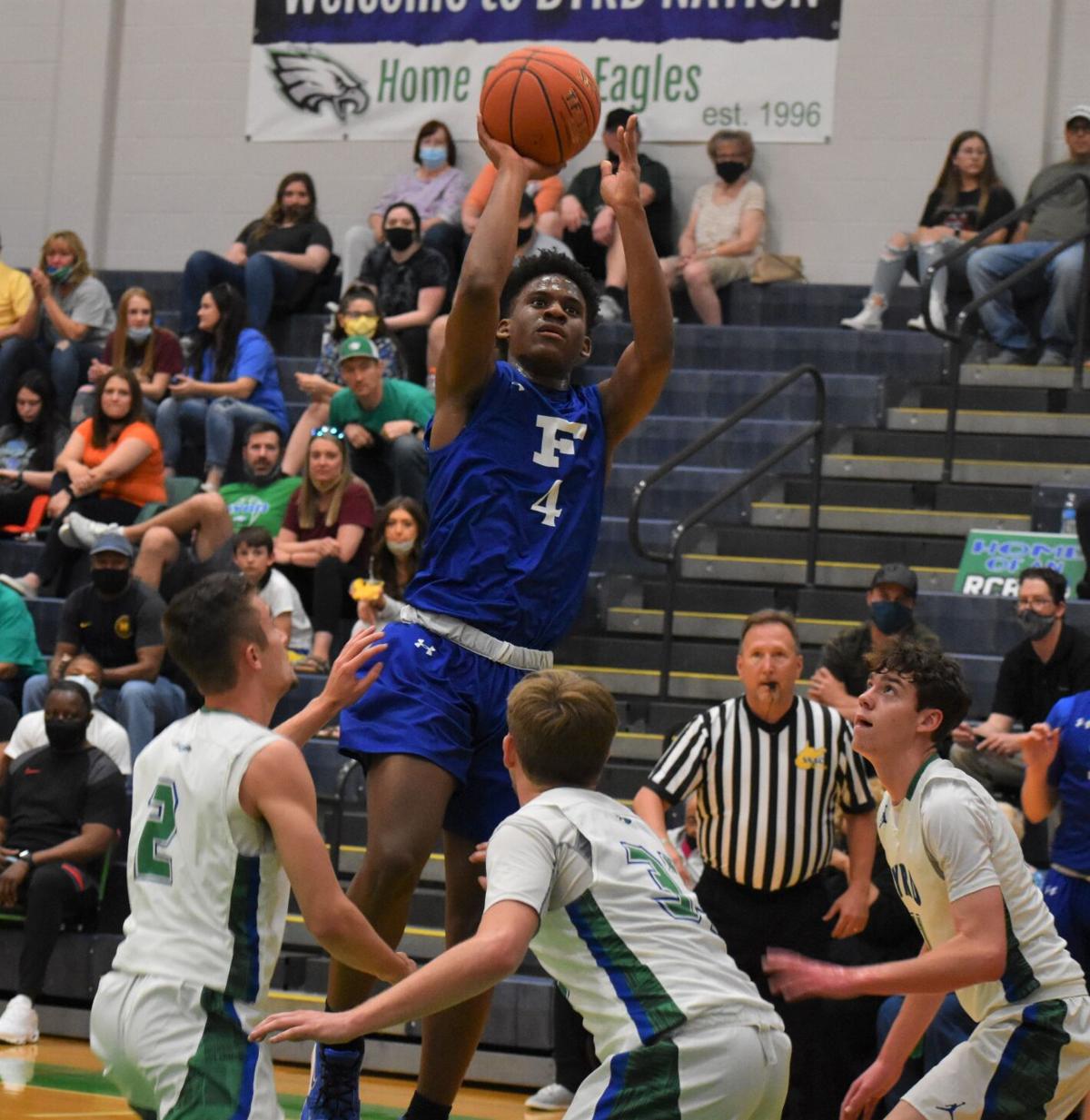 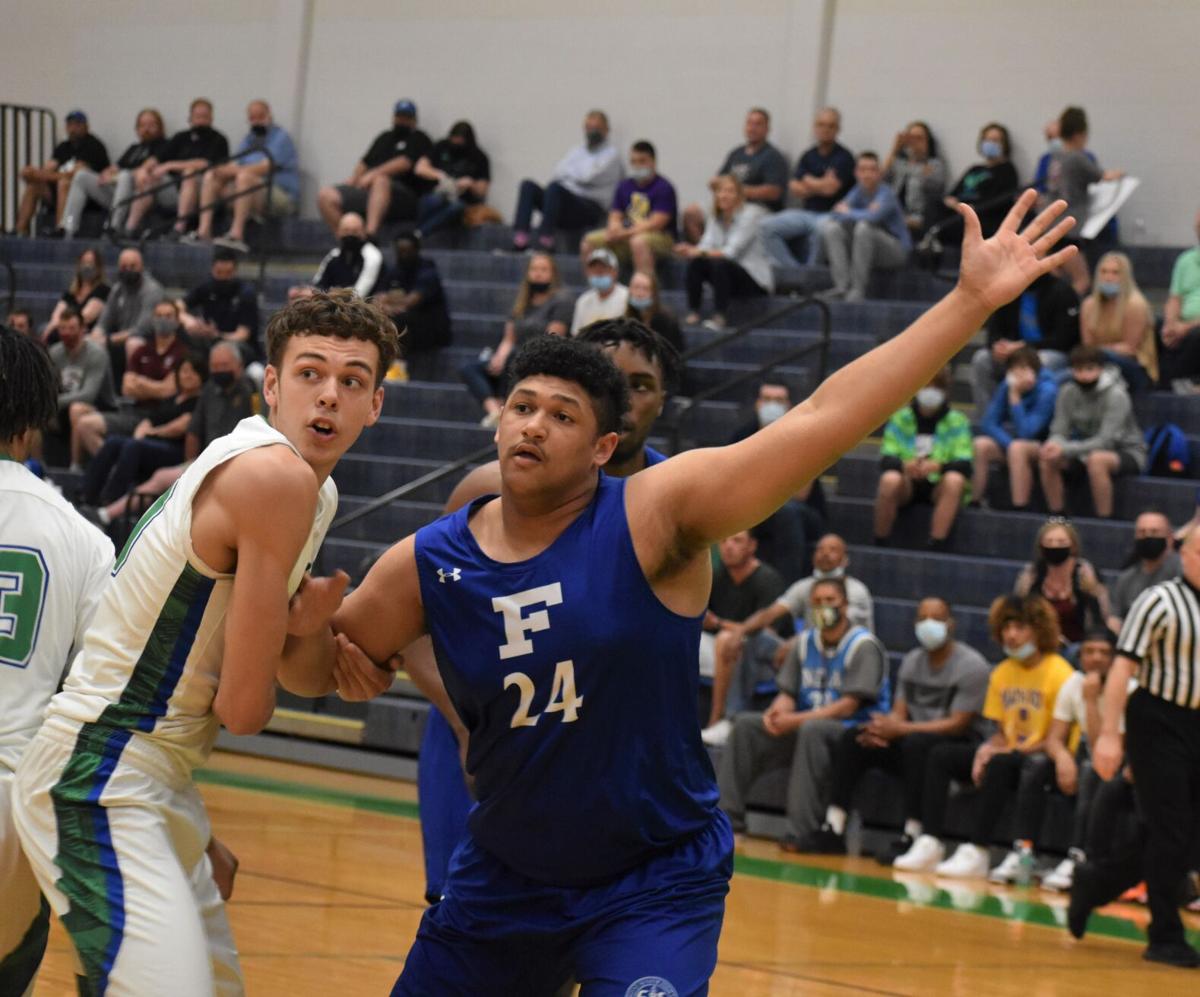 NUTTER FORT — In what was a titanic matchup and potential Class AAA championship preview, one-loss No. 1 Robert C. Byrd and undefeated No. 2 Fairmont Senior went at each other in the ultimate stare down of basketball excellence to produce an instant classic Friday night at the Bird Cage in Nutter Fort.

For 32 minutes, the Eagles and the Polar Bears sparred back and forth in an all-encompassing showdown of competitive grit and hardwood acumen. But yet, even after nearly four full quarters of tit-for-tat play, the game’s truest prize — a hard-fought victory — hung in the balance.

“Our team is about that defensive toughness and getting into a stance and working,” RCB coach Bill Bennett said, “and that’s why you can win a ball game like this.”

True to its nature, Byrd’s defense dug in, not once, but twice, in the final 30 seconds and turned Fairmont Senior back to pull out the 57-55 win and maintain its perch as the best team in Class AAA.

“That’s a great team (at Fairmont), they’re well-coached and they play great defense as well,” Bennett said, “and really, it was anybody’s ballgame and it just came down to a few plays in the fourth quarter.”

“They have a very good team and so do we,” Fairmont Senior coach David Retton said, “and I’m very confident we’re going to take this game and learn from it. You can get a deeper drive and a deeper resolve to do what you set out to do, and sometimes you have some setbacks, but you have to deal with them and move forward. That’s what we’re gonna have to do and that’s what we will do.”

Once down 55-49 with five minutes to play, Fairmont Senior churned out a 6-2 run over the next four-plus minutes to slice Robert C. Byrd’s lead to just two at 57-55 and earn one final crack to tie it out of a timeout with less than 30 seconds to play. But the Polar Bears were stymied by the Eagles, as Byrd thwarted the initial action of a pick-and-pop between FSHS’s star duo of Zycheus Dobbs and Jaelin Johnson and then stalled the second option of a Johnson catch-and-go drive before the possession unraveled and resulted in a semi-contested catch-and-shoot 3 by Johnson that missed.

But after cleaning up the boards all night, Byrd allowed the offensive rebound to slide through and FSHS senior guard Bryson Flowers drew a foul in pursuit to give Fairmont Senior one final shot inbounding with 0.9 seconds left.

The Eagles denied any lobs or slips to the basket and eventually forced a desperation turnaround jumper by FSHS big man Eric Smith that was partially blocked by RCB senior star forward Bryson Lucas to preserve the victory.

“We thought they were going to try to lob it in to Jaelin, and I’m still not convinced that’s not what they were looking for, but we congested the middle and we knew whatever they did, they were gonna have to do it quick,” Bennett said.

“We wanted to throw the lob,” Retton said, “but we also wanted to get the ball inside, because we thought we could get it inside real quick to get a shot. And we got something, but it wasn’t what we wanted.”

The consecutive stops by the Eagles put a resolute punctuation mark on a game that was a near dead-even standoff throughout between two rock-solid teams built upon discipline, diligence and doggedness at both ends.

For Byrd, Lucas led the way with a massive double-double of 21 points and 12 rebounds, to go with two blocks and two steals. And his senior running mate and co-star in point guard Gavin Kennedy added another 17 points with three assists. Jeremiah King and Thomas Hawkins each scored another eight and six points, respectively, for the Eagles.

And for Fairmont Senior, Johnson scored a game-high 26 points on 9-of-18 shooting, and he also plucked three steals to go with two rebounds, two assists and two blocks. Dobbs, meanwhile, poured in another 15 points on 7-of-11 shooting to pair with three assists and three blocks, while Smith just missed a double-double at nine points and 10 rebounds.

“They were all a part of it,” Bennett said of his players’ contributions to the big-time win. “It’s hard to single anybody out, but Tommy (Hawkins), I can’t say enough about the heart he shows — he probably has a torn meniscus, and I wasn’t going to start him in the second half because I thought he was done, but he said, ‘Let me see if I can go for a couple of minutes.’ He’s just a tough, hard-nosed kid who shows a lot of heart and soul, and that exemplifies what our team is about.”

It was Fairmont Senior, which actually outshot RCB 48.9% to 41.5%, though, that made hay early, as it burst out to its largest lead of the game at 17-10. The fast start was triggered primarily by Johnson, who ticked off 11 points in short order, as he fractured RCB’s normally sound defense with a lethal combination of high-wire perimeter shooting and downhill force, a trend that sustained throughout the game.

Byrd quickly responded, however, reeling off an 8-2 lead close to the first quarter before knotting things up at 26-26 midway through the second period on an aggressive, quick-twitch attack by King.

From that point on, the game turned into a nip-and-tuck grudge match in which neither team could gain an edge.

Fairmont Senior took back the lead by halftime at 33-32 with a trailer 3 from above the break by Smith, who scored seven of his nine points in the first half. But RCB wrangled control in the third quarter, taking the lead at 37-35 on an and-one finish by Kennedy out of the pick-and-roll and then pushing it to many as six at 48-42 after Blake Meighen was fouled on a 3-point attempt.

In the case of the Eagles, the calling card was bludgeoning aggression offensively and extended on-ball pressure with layers of strong side help defensively. All night long, Byrd hunted the paint on offense with shoulder-checking drives that either displaced Fairmont’s defenders or rendered their contests moot. King scored all three of his buckets practically by powering up and through FSHS defenders, and Kennedy, too, burned the Polar Bears with a determined but poised bundle of drives.

And Lucas loomed over it all, as his willowy frame and top-tier athleticism gave Fairmont fits. He scored a couple of buckets out of sheer meanness in the post and he dropped in a few more deuces with quick-twitch rip-through attacks. But he did most of his damage with a series of putbacks, including a big one in the fourth quarter that resulted in an and-one to break a 49-49 tie and put the Eagles up for good.

“We felt we got hurt with dribble penetration and I thought they played bully-ball. When I say bully-ball, I mean they drove the ball and dared us to stop them, and many times we didn’t,” Retton said. “They’d have a missed shot, but then they’d get a putback. We were effective (defending the 3), but we thought they out-physicaled us getting some 50-50 balls and points in the paint, and then it comes down to that last possession.

Fairmont Senior, however, never lost the rope despite the problems RCB posed, as the Polar Bears were keen sinking into gaps before closing out hard to shooters on defense, and went to their two aces — Johnson and Dobbs — to keep pace on offense.

Johnson, especially, ripped Byrd to shreds despite seeing different defenders in King and Lucas as well as plenty of help side defense overloaded into his driving lanes. Johnson canned three 3s in the game, including a silky pull-up off a ball screen in the third quarter that temporarily gave FSHS the lead back, and his assaults on the rim were nearly unpreventable for the Eagles. His apex moment came late in the third when he caught the ball on the wing and tore into a rip through drive that ended with a daunting two-handed and-one power slam.

But in the fourth, it was Dobbs who brought FSHS back after Byrd took its 55-49 lead with 5:06 to play. The steely freshman, who dropped in feathery floaters and operated at his own pace all night long, first scored on an off-the-catch drive to make it a 55-51 game, and he followed that up with a cold-blooded crossover into pull-up midranger that made it a two-point game at 55-53.

In the end, though, that two-point margin was all Robert C. Byrd needed, as it put the clamps on the Polar Bears on the game’s biggest possession.