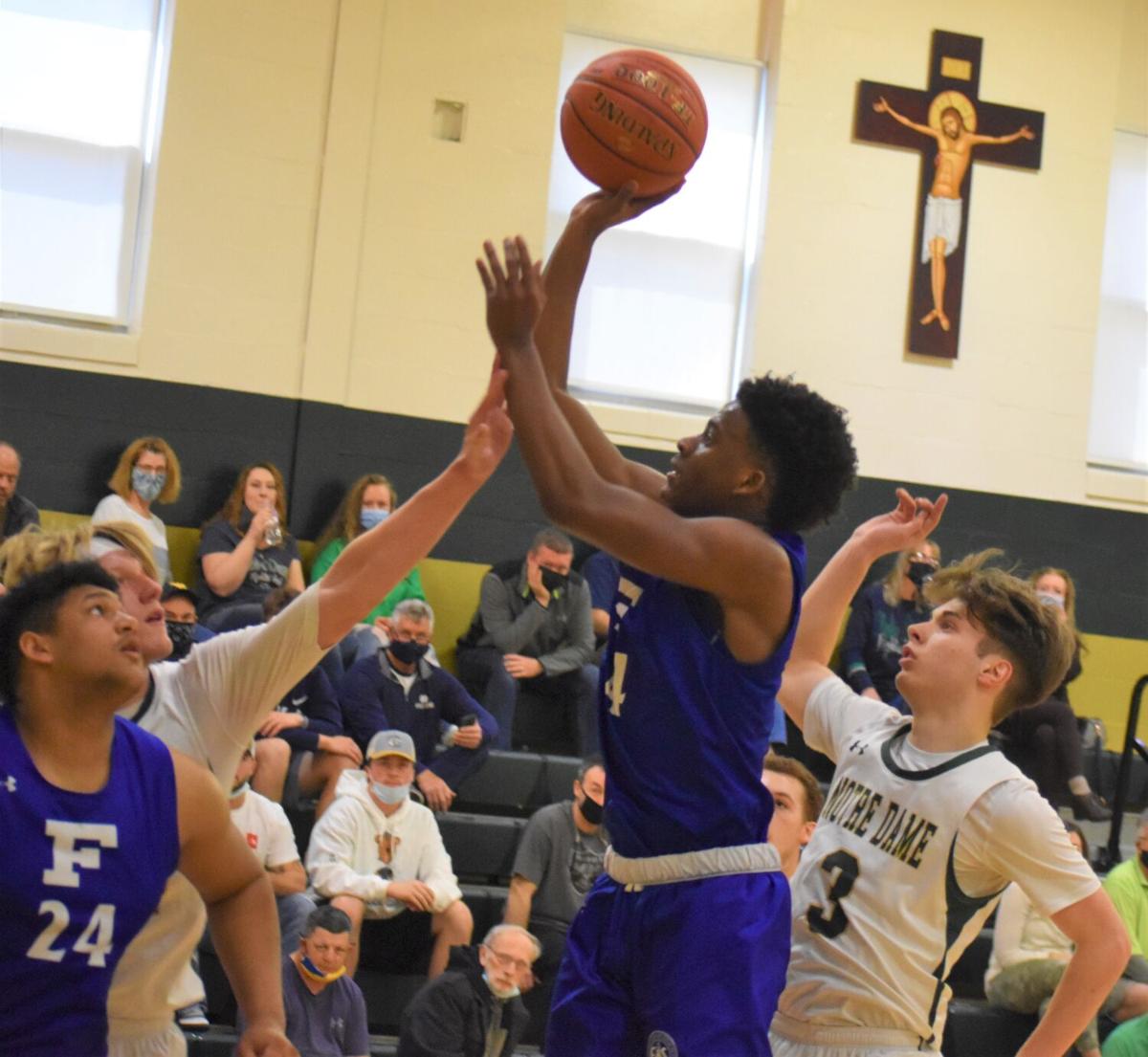 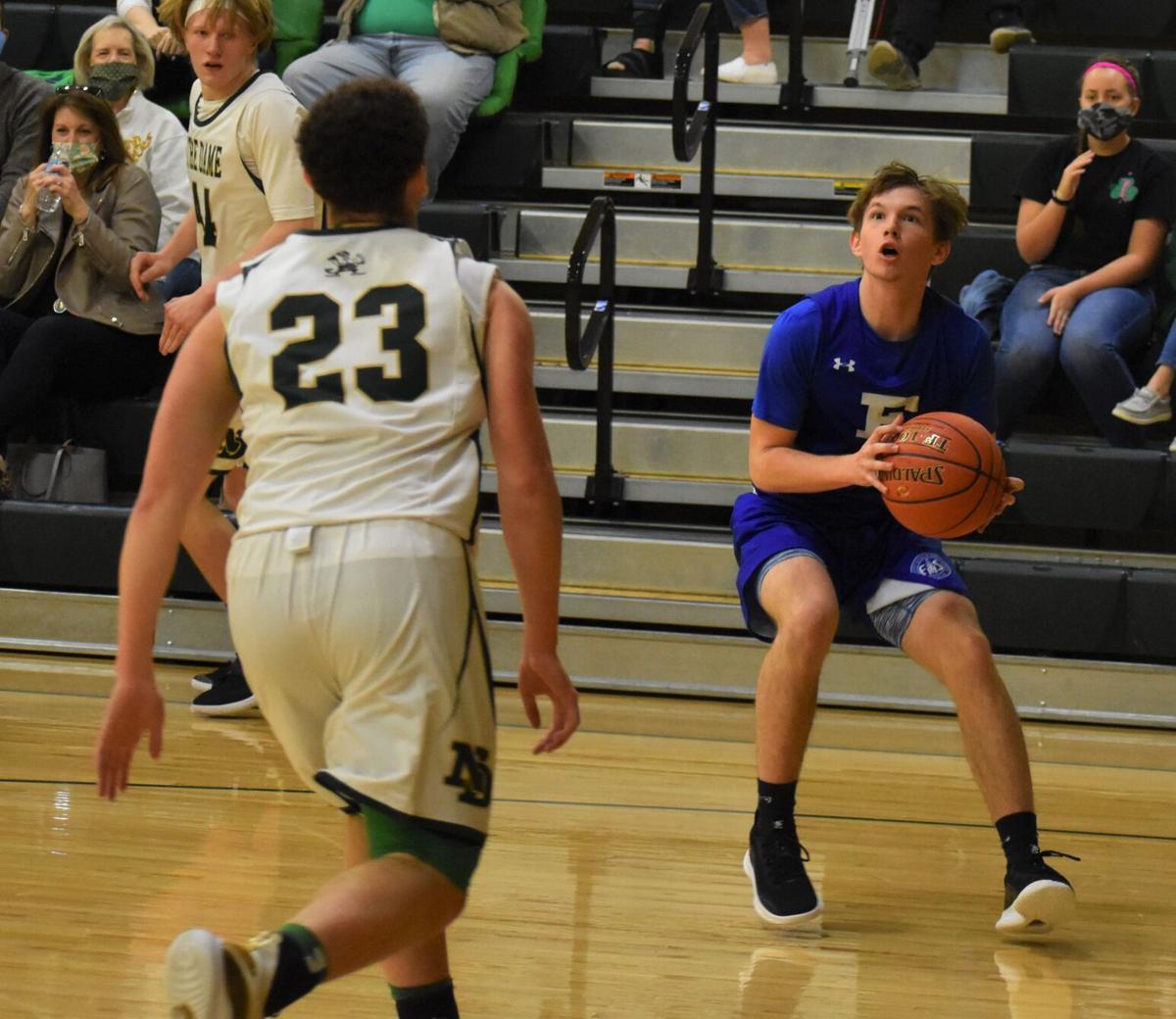 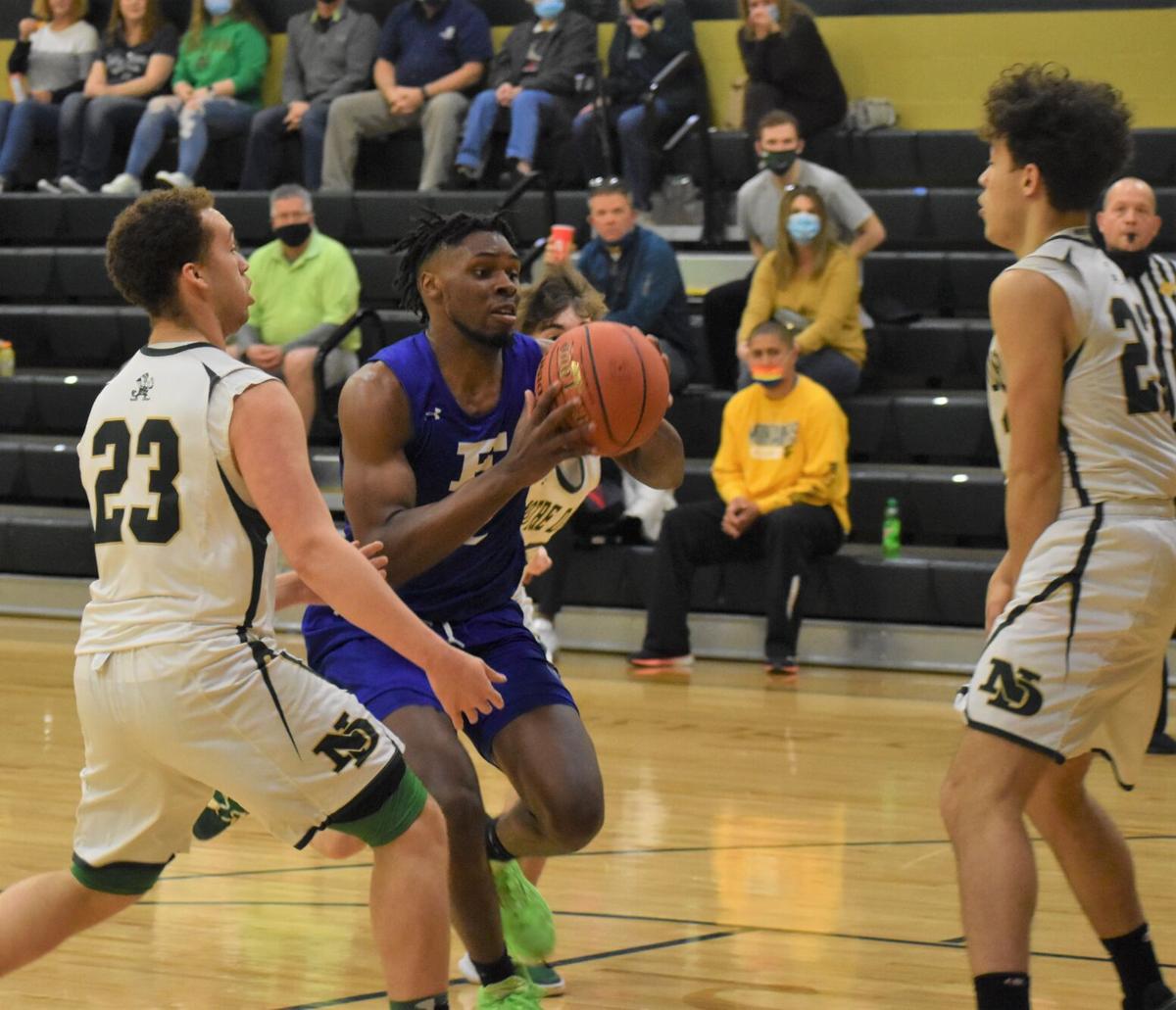 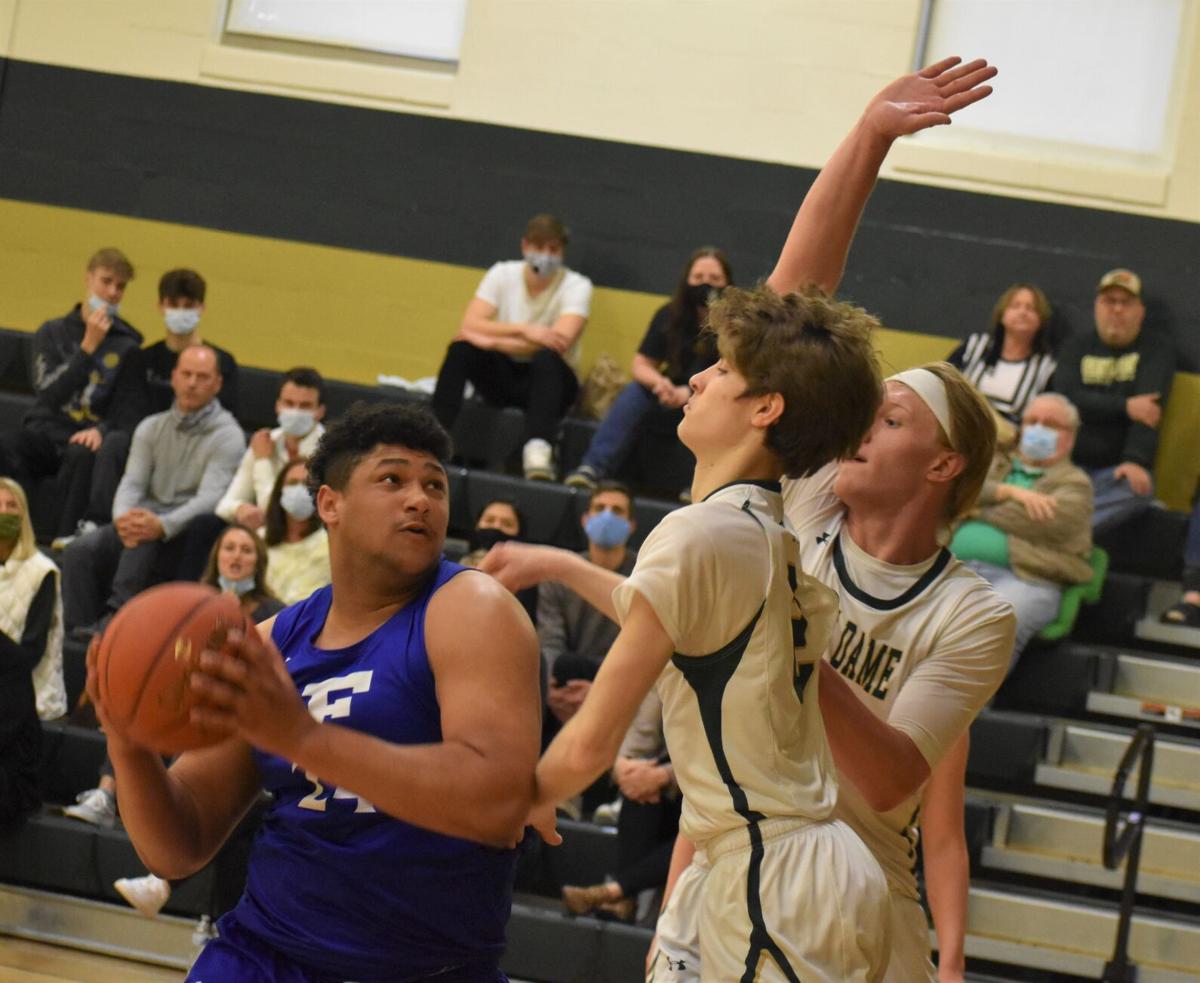 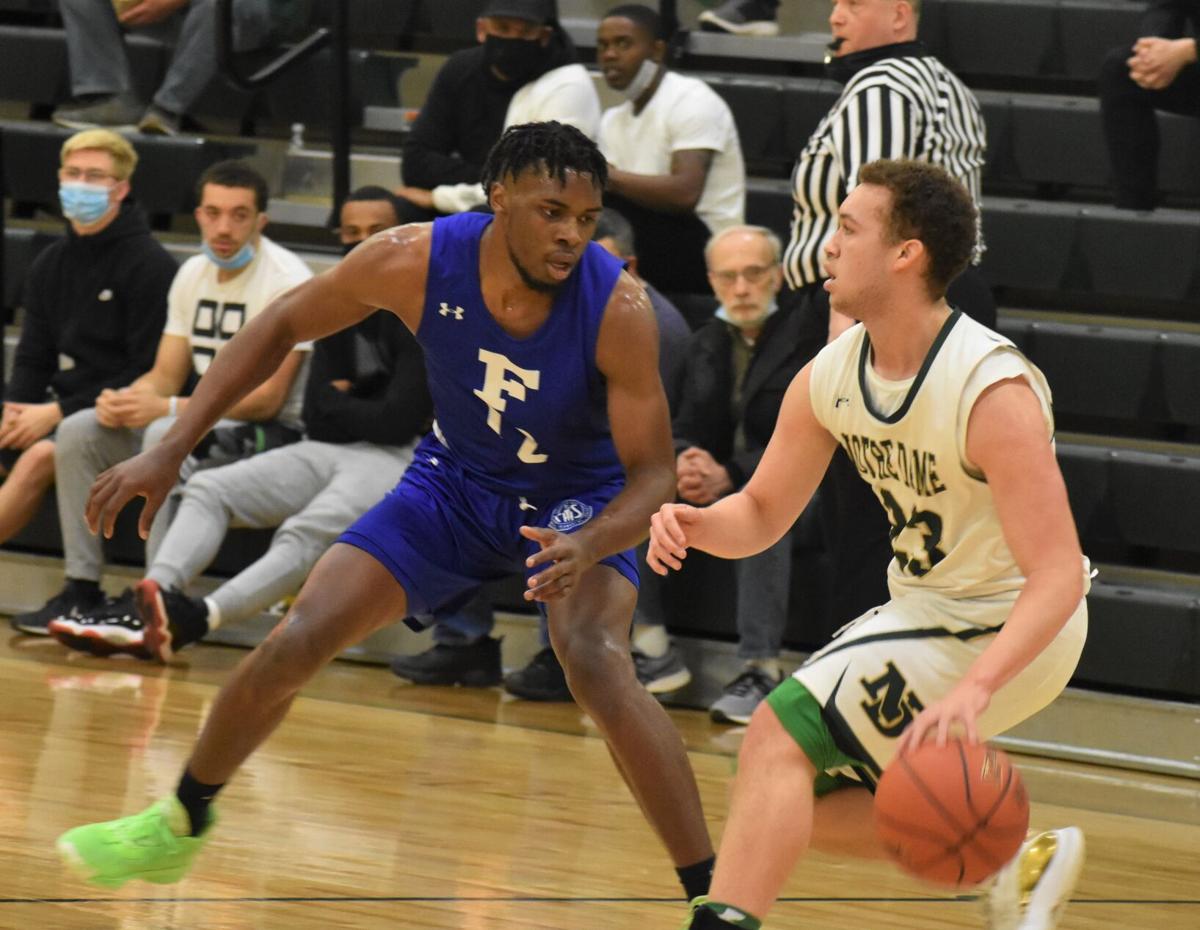 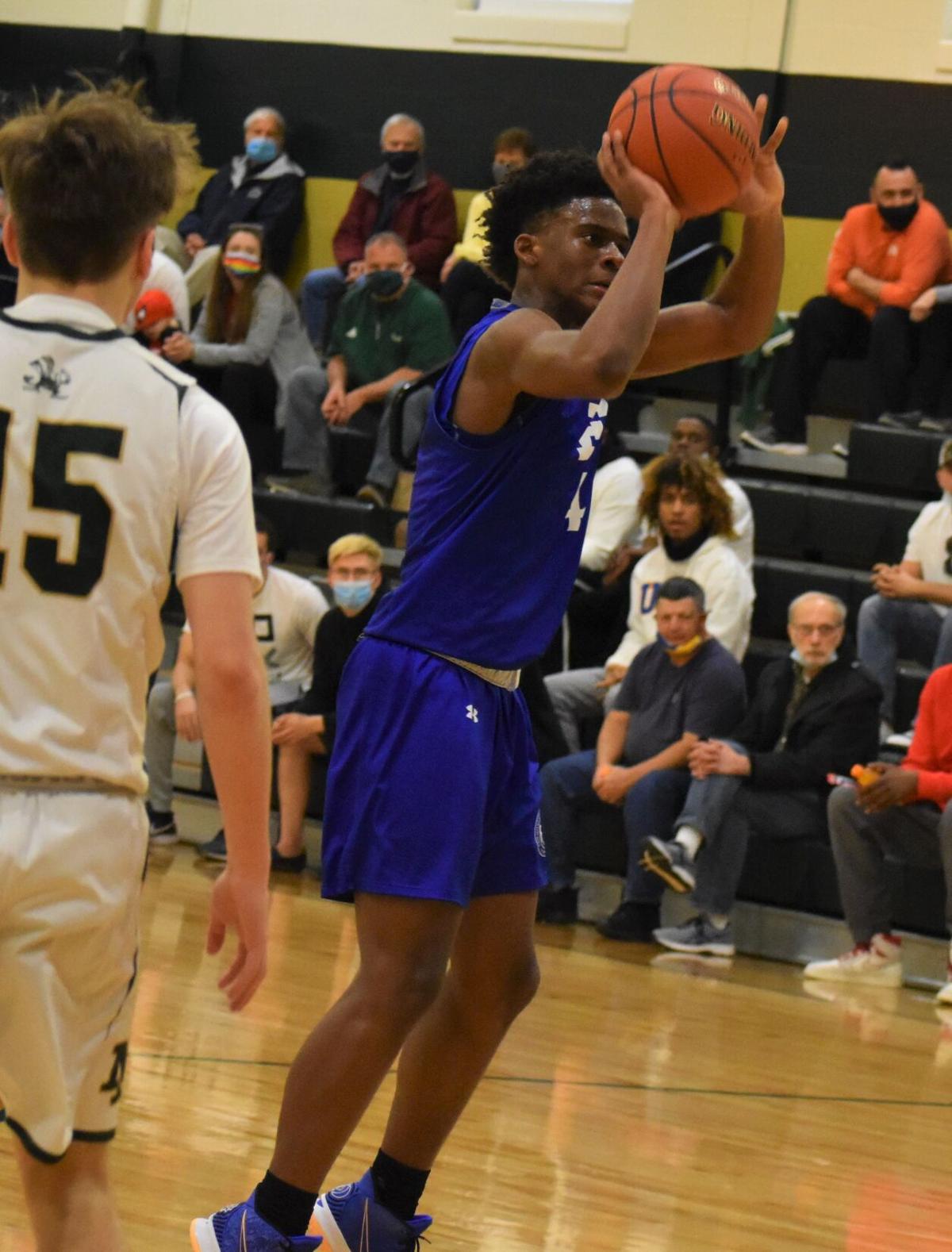 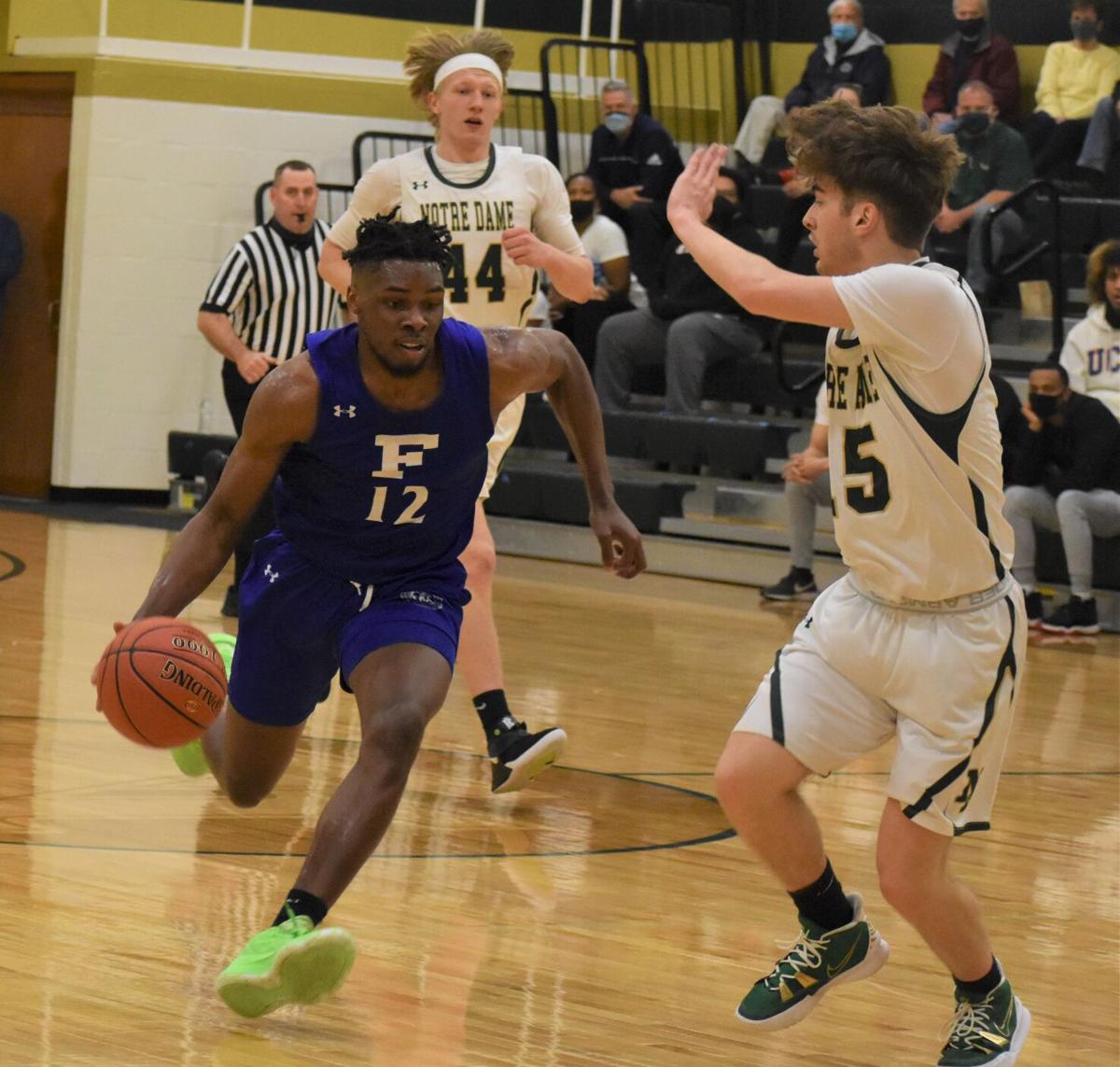 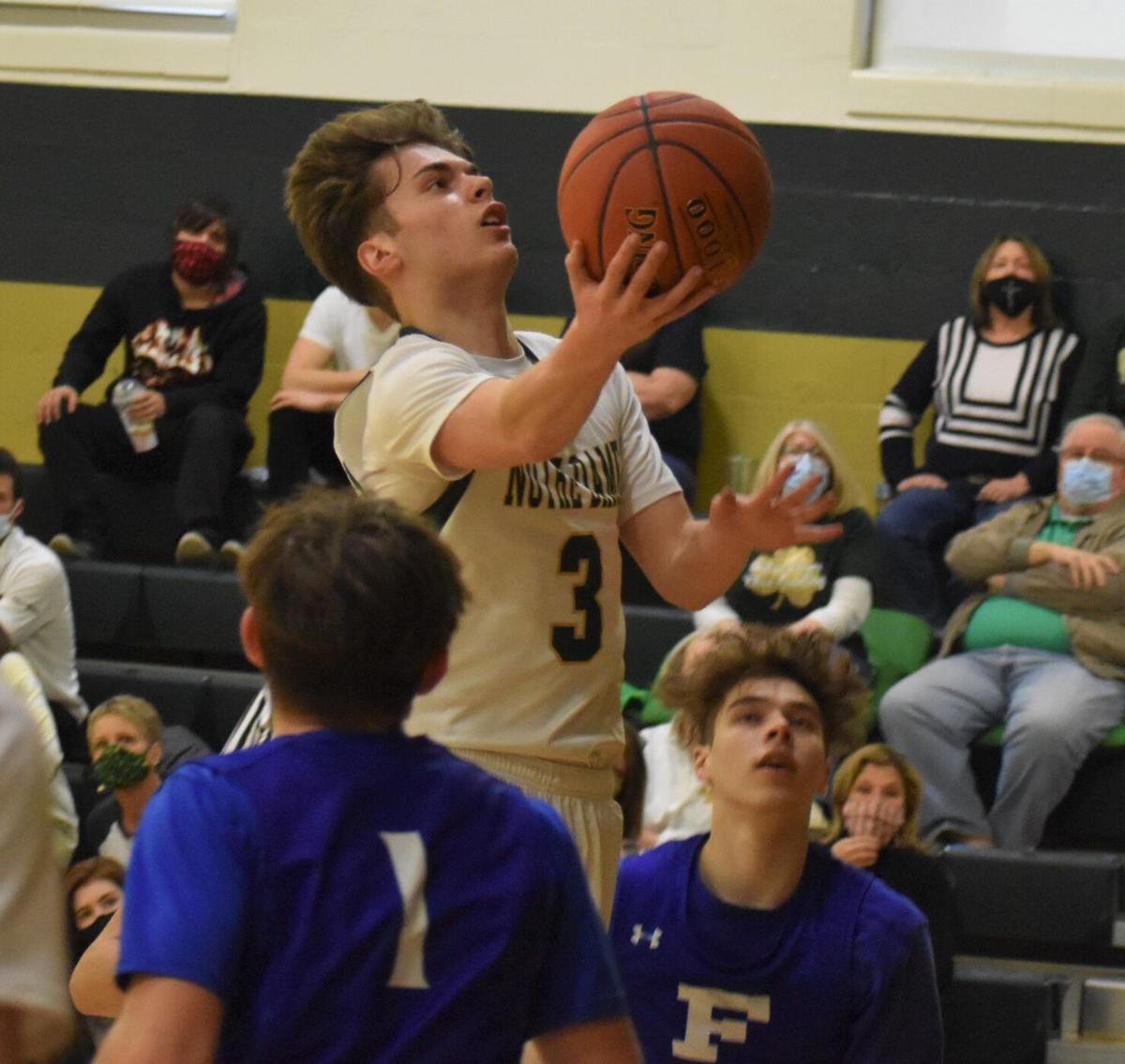 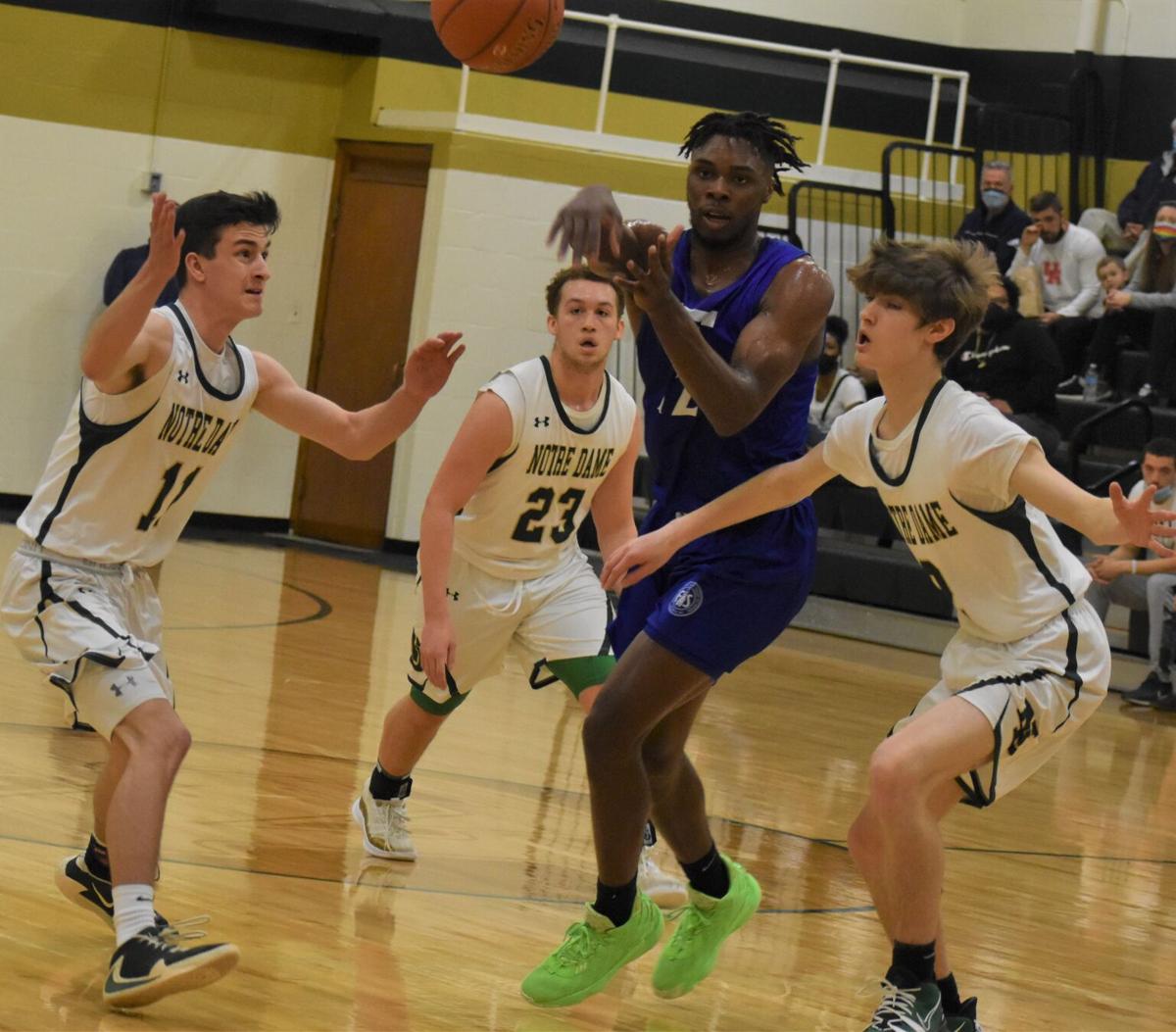 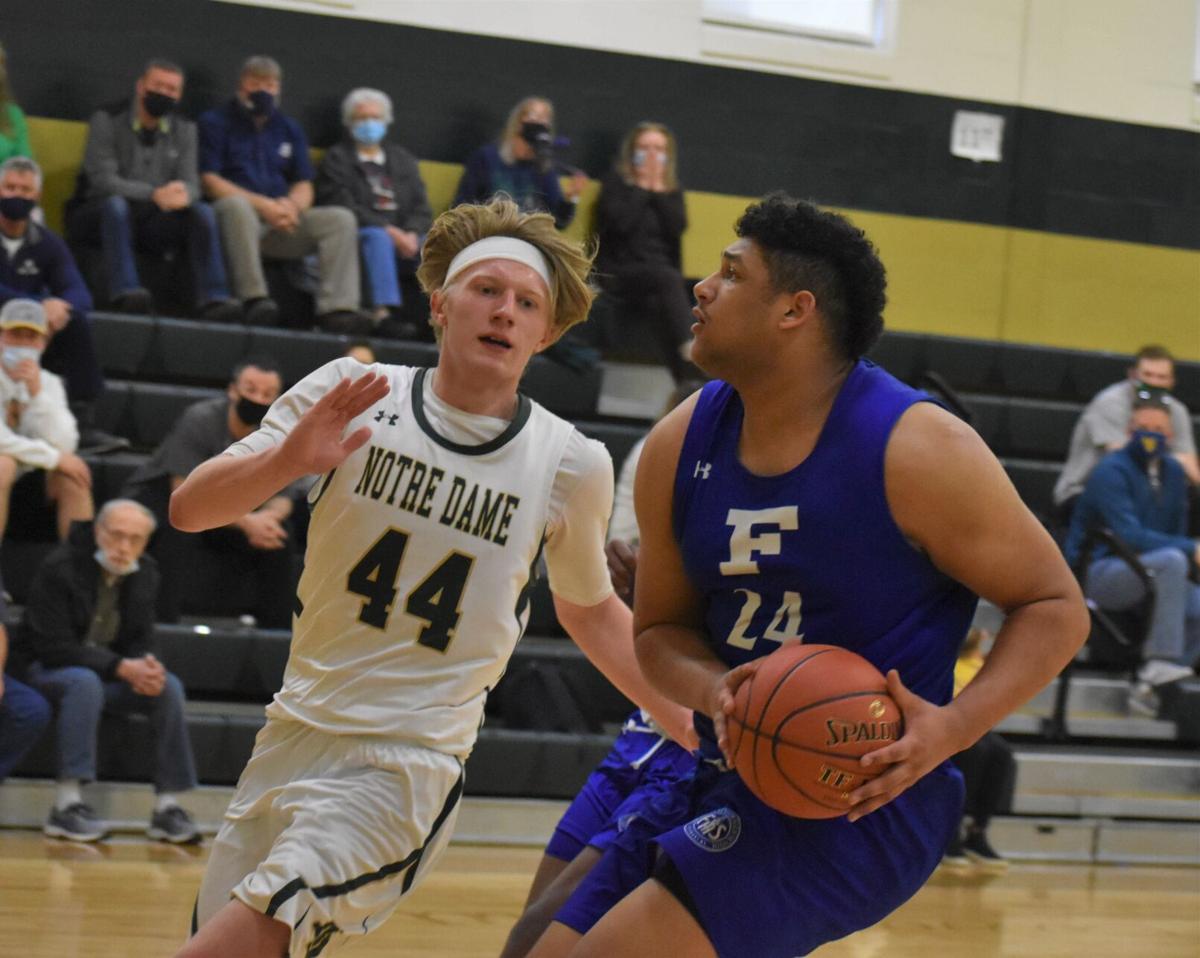 Fairmont Senior's Eric Smith prepares to go up for a shot against Notre Dame's David Goodman. 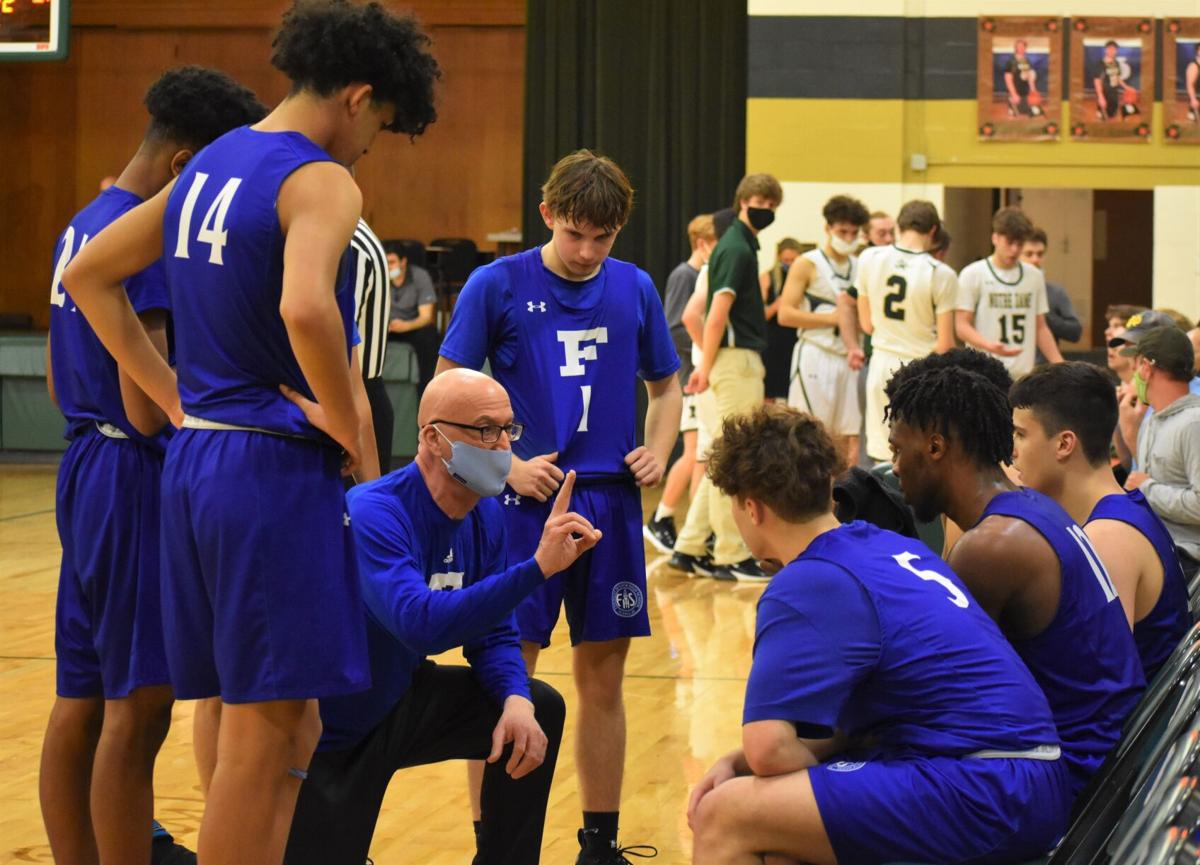 Fairmont Senior coach David Retton talks to the team during a timeout during a game earlier this season at Notre Dame High. The Polar Bears begin play in the Class AAA state tournament today at 1 p.m. against Winfield in Charleston.

Fairmont Senior's Eric Smith prepares to go up for a shot against Notre Dame's David Goodman.

Fairmont Senior coach David Retton talks to the team during a timeout during a game earlier this season at Notre Dame High. The Polar Bears begin play in the Class AAA state tournament today at 1 p.m. against Winfield in Charleston.

CLARKSBURG — The full breadth of Notre Dame’s offense knocked Fairmont Senior off balance in the first half en route to a 35-31 lead. Then an avalanche of 3s from Irish star Jaidyn West further staggered FSHS in the third quarter as Notre Dame grew its lead to six at 51-45.

But through it all, the Polar Bears stayed the course to remain standing. And in the fourth quarter, when winning time arrived, it was the Polar Bears, not the Irish, who harnessed their full collective power and roared back for a 64-59 victory to stay undefeated in what was a big-time matchup of Class AAA Top 10 teams on Saturday in Clarksburg.

“I think we really just embrace playing four hard quarters, where in the first three quarters, they gave us everything we wanted and then some, but we just played a whole four quarters,” said FSHS senior guard Bryson Flowers, who scored 11 points and put forth a master class of gritty, winning plays down the stretch. “We never gave up obviously, but we never even looked up and said, ‘Ooh, this one might be over with.’ We just kept chipping away, chipping away where eventually we were going to get a stop, or get a charge....we were gonna get something and we were gonna get going.”

No. 2 Fairmont Senior’s momentous fourth-quarter, in which it outscored Notre Dame 19-8, was a two-way tour de force, as the Polar Bears simultaneously put the clamps on the No. 9 Irish’s once-scintillating offense and brewed up its own storm of clutch shot making and offensive firepower. Fairmont Senior (11-0) held Notre Dame (3-4) to just four points and without a single field goal in the fourth quarter until a West layup hit the net at the 14-second mark, as the Polar Bears outshot the Irish 66% to 25% in the fourth quarter and won the turnover battle 5-4.

“Everything starts with our defense,” Fairmont Senior coach David Retton said, “and I can’t say enough about our team play defensively. That was the key for us.”

The comeback victory for Fairmont Senior was powered first and foremost by freshman phenom point guard Zycheus Dobbs, who played what was likely the best game of his young FSHS career, as he poured in a team- and career-high 22 points on 7-of-9 shooting while also taking on the defensive matchup against West for most of the second half. Senior star forward Jaelin Johnson added another 15 points on 6-of-11 shooting with nine rebounds and four assists for the Polar Bears while also defending West pretty much exclusively in the first half. Flowers coupled his 11 points with two rebounds, two assists and two steals, and junior center Eric Smith recorded another six points and seven rebounds for FSHS.

West led all scorers with a game-high 33 points on 11-of-21 shooting, including a ridiculous 7-of-15 from 3, to go with two rebounds, two assists and three steals for Notre Dame. Junior forward Glendon Britton was the lone other double-digit scorer for NDC as he scored 10 points, all of which came in the first half, and had seven rebounds, and NDC senior 6-foot-5 forward David Goodman scored another eight points.

“We just needed to get the win. That was all that was going through my mind was to get the win,” said Dobbs, whose big afternoon saw him score 14 of his 22 points in the second half, including seven of FSHS’s first nine points of the fourth quarter. “We just played our game down the stretch and didn’t get rattled.”

The gut check rally in the fourth quarter started with a quick personal 5-0 spurt by Dobbs, as he cashed in a pair of free throws and drilled a pull-up 3 in transition to bring Fairmont Senior within one at 51-50. West hit two of his own free throws for NDC to keep FSHS at bay until just under five minutes to play, but Dobbs delivered yet again moments later, when he dropped in a cool floater off a probe dribble for the go-ahead bucket to make it 54-53 Polar Bears.

“We’ve done the same thing all year — we just keeping running what we run and we know it’ll work out,” said Dobbs, who gashed Notre Dame all afternoon with a poised patience and savvy decision making both with and without the ball. “I feel like my jumper was going, I was producing at the basket, and I made all my free throws.”

Once the inevitability of Fairmont Senior’s methodical, dogged two-way play took control of the game, West and the Irish couldn’t wrangle it back, as the Polar Bears’ ferocious defense suffocated West with a wave of bodies on his every touch and deciphered the Irish’s once-profitable web of backscreens.

Dobbs lived in West’s personal space, trailing him tightly off the ball and pressing up on him on the ball. If West got a sliver of separation from Dobbs, either by running off screens or setting one of his own before popping out to receive a pass, the Polar Bears switched. When NDC gave West a ball screen, FSHS committed two defenders to the ball to force him to give it up, and when West drove out of isos to try to at last find a pocket of space, FSHS defenders flocked to cut off his path and draw charges.

“A lot of their stuff goes through Jaidyn as it should because he’s such a good player, and I think early on, because we were so focused on him, they started to get a lot of slips and easy buckets from the other guys. In the fourth quarter, I think we clogged the driving lanes, got out on shooters, and we were just a lot more active and having fun,” said Flowers, who himself drew three charges on West after rotating over in help defense.

“He creates a lot of havoc for you,” Retton said of West and the challenge of defending him. “JJ (Johnson), he expended a lot of energy (on West) and he didn’t get a rest, and then Zycheus, he just works defensively, and he did a tremendous job on him.”

As Fairmont Senior hemmed in West, who scored 19 of Notre Dame’s 24 points in the second half, Joseph Uram and Johnson essentially put the game away with less than two minutes to play with back-to-back huge buckets. First, with Fairmont Senior up one, Uram spun through the lane and flicked in a bank floater, and then, on the following possession, Johnson exploded on a blow-by baseline drive before adjusting to finish at the rim to give the Polar Bears a five-point advantage with 1:21 to play.

The gut-check fourth period was the endgame to what was a back-and-forth thrill ride within a supercharged atmosphere by the Polar Bears and Irish.

Fairmont Senior got up 12-7 early on, but Notre Dame ticked off a 14-4 run in response to nab a 21-16 lead early in the second quarter, as the Irish’s half-court offense hummed amid a flurry of layered screening actions, including a highlight-worthy lob dunk to Britton off a backscreen in the latter stages of the first quarter. The Irish went on to outscore the Polar Bears 18-15 for the full duration of the second quarter and take a 35-31 halftime lead after West ripped off three 3s over the half’s final four minutes.

West continued blazing the nets into the third quarter, as he opened the second half with a string of three more 3s to reach full “en fuego” zone with six consecutive makes from beyond the arc. West uncorked the first of his three straight 3s in the third when he pulled out of face-up situation after getting a mismatch on a switch. He buried his second moments later on a baseline-out-of-bounds set in which he set a screen before popping to the corner for a catch-and-shoot. Then, he tacked on his third triple with a heat-check trailer 3 that practically had the entire arena gawking.

Following a fourth NDC triple, this one by Kobe Martino off a drive-and-kick assist by Clay Martino, the Irish tied their largest lead of the game with a seven-point margin at 49-42 with under three minutes to play in the third. But from that point forward, Fairmont Senior’s defense put Notre Dame in a straight-jacket, as the Polar Bears limited the Irish to just 10 points over the final 10-plus minutes to fuel the comeback.