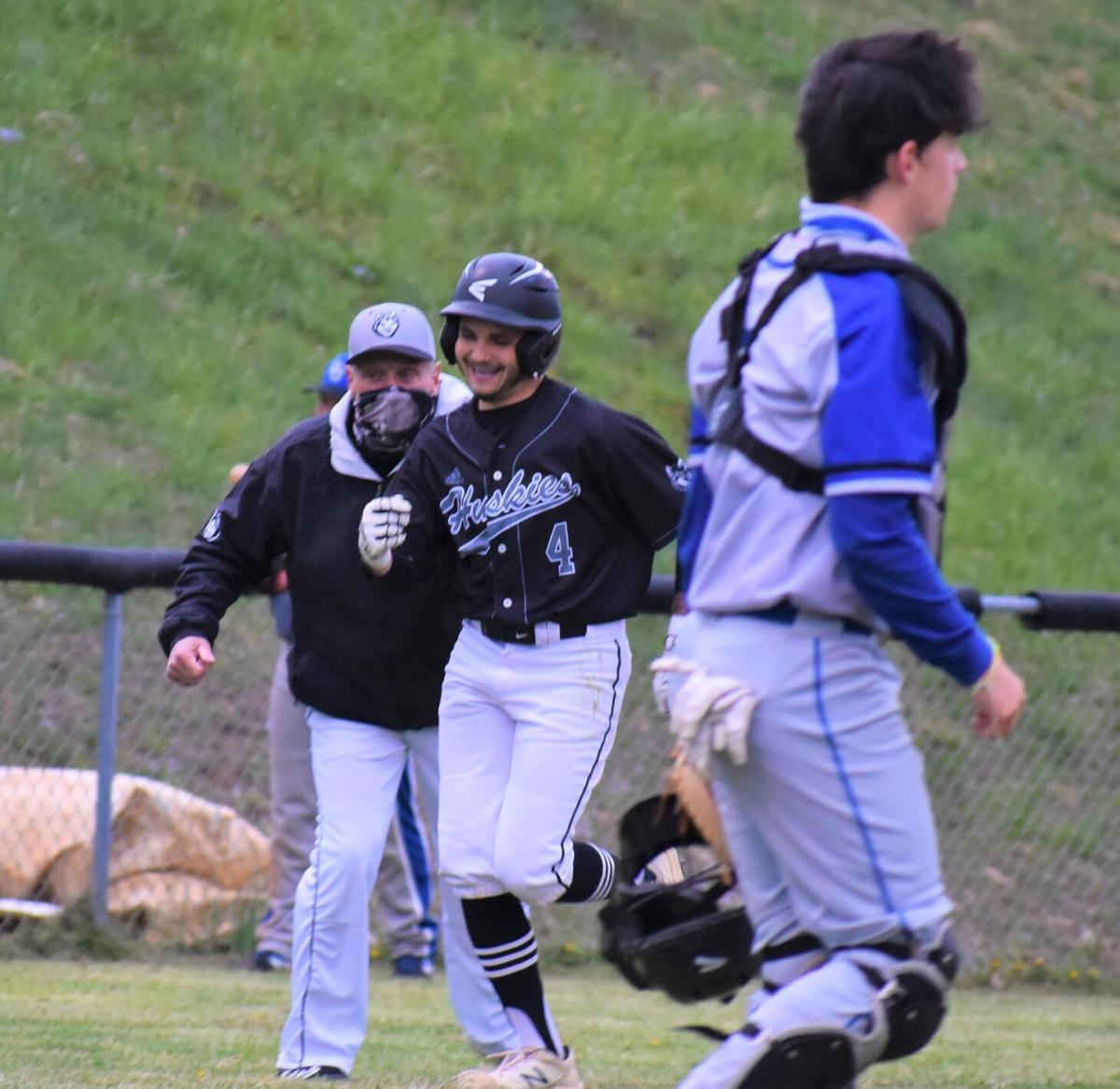 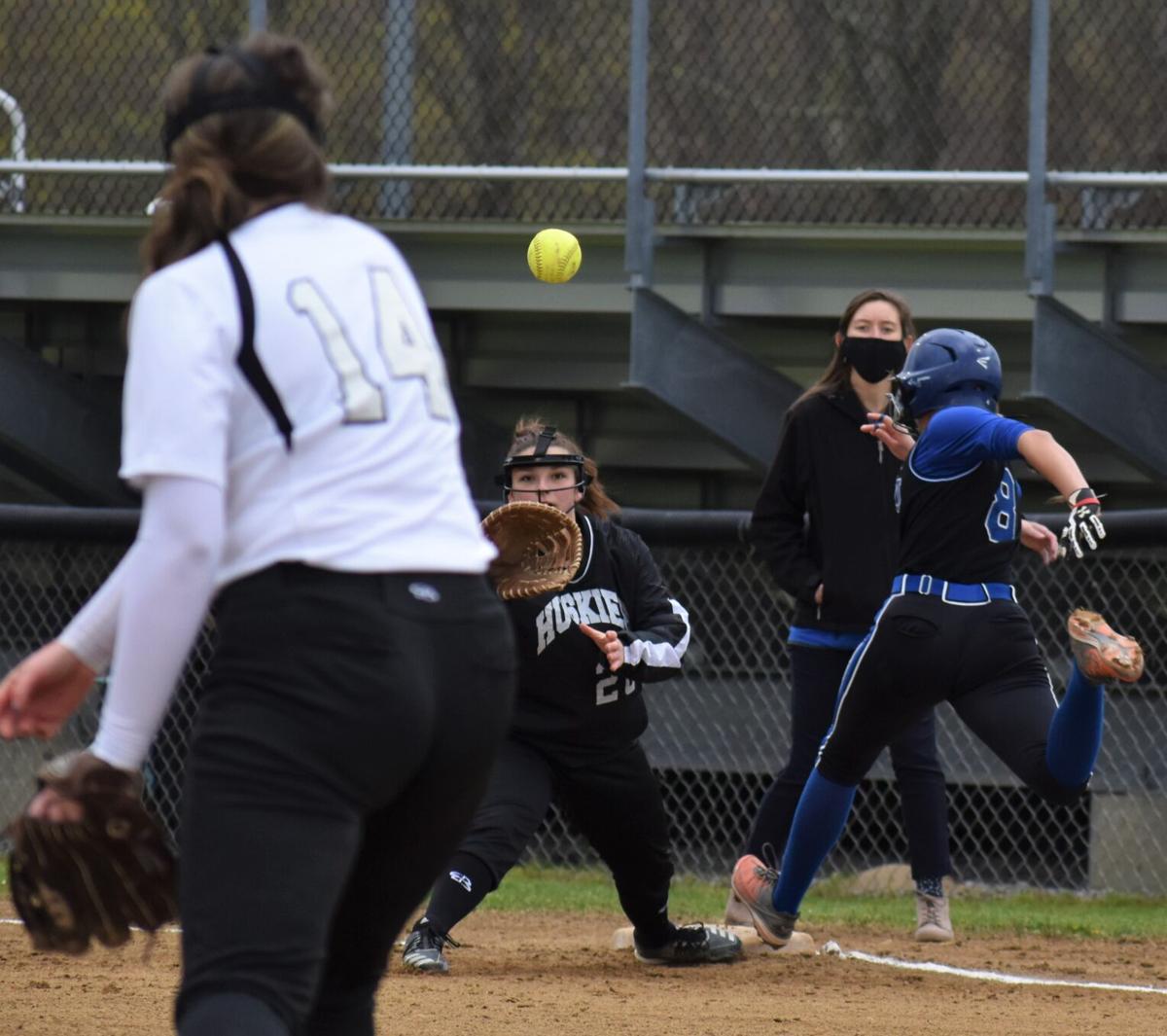 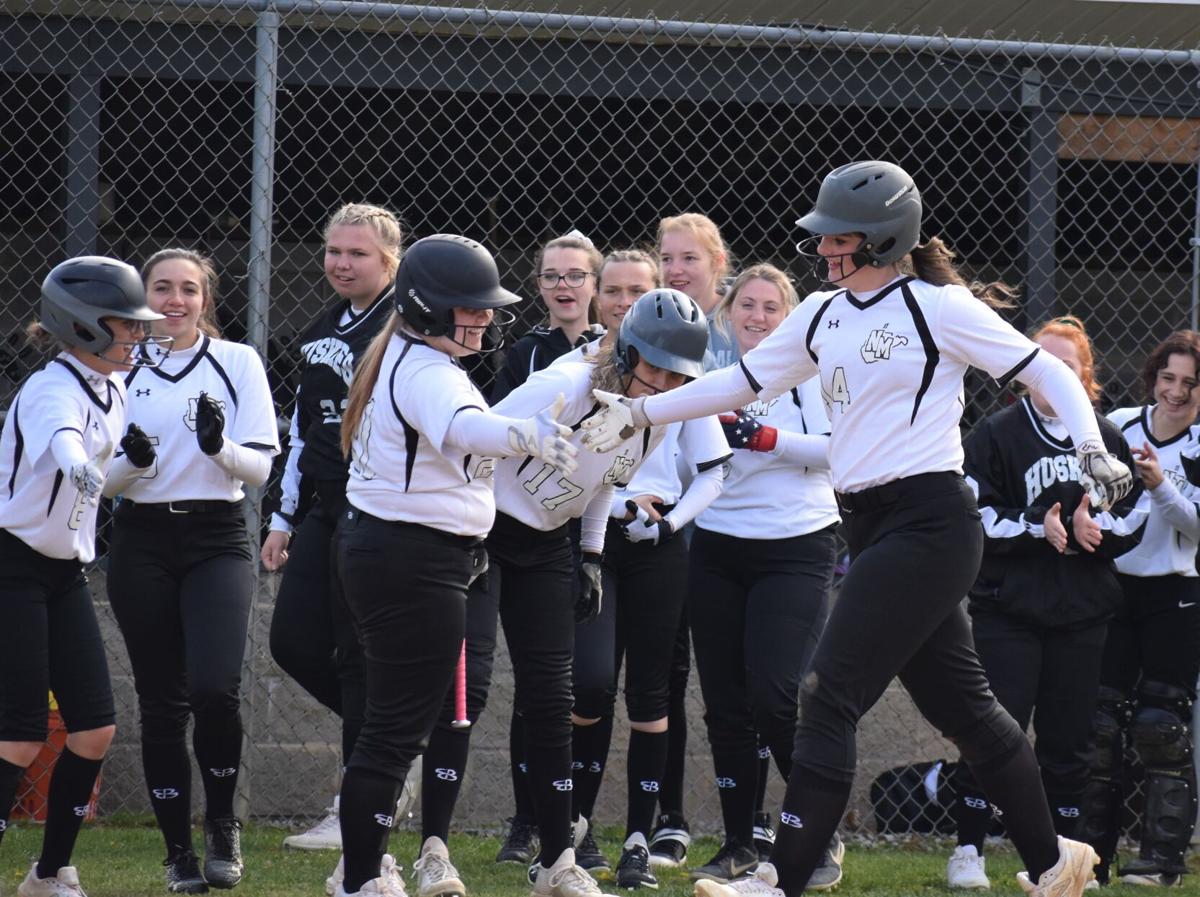 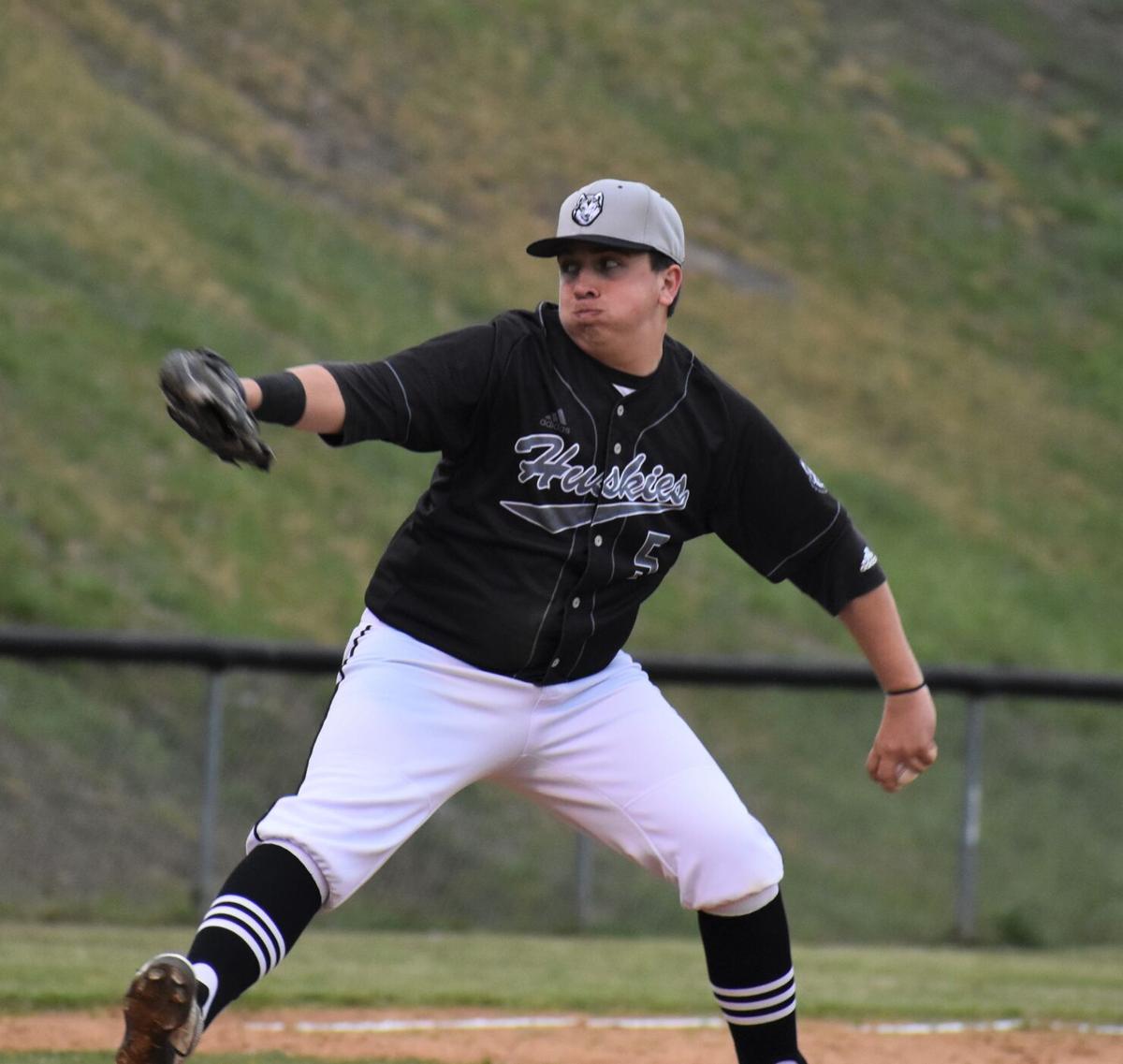 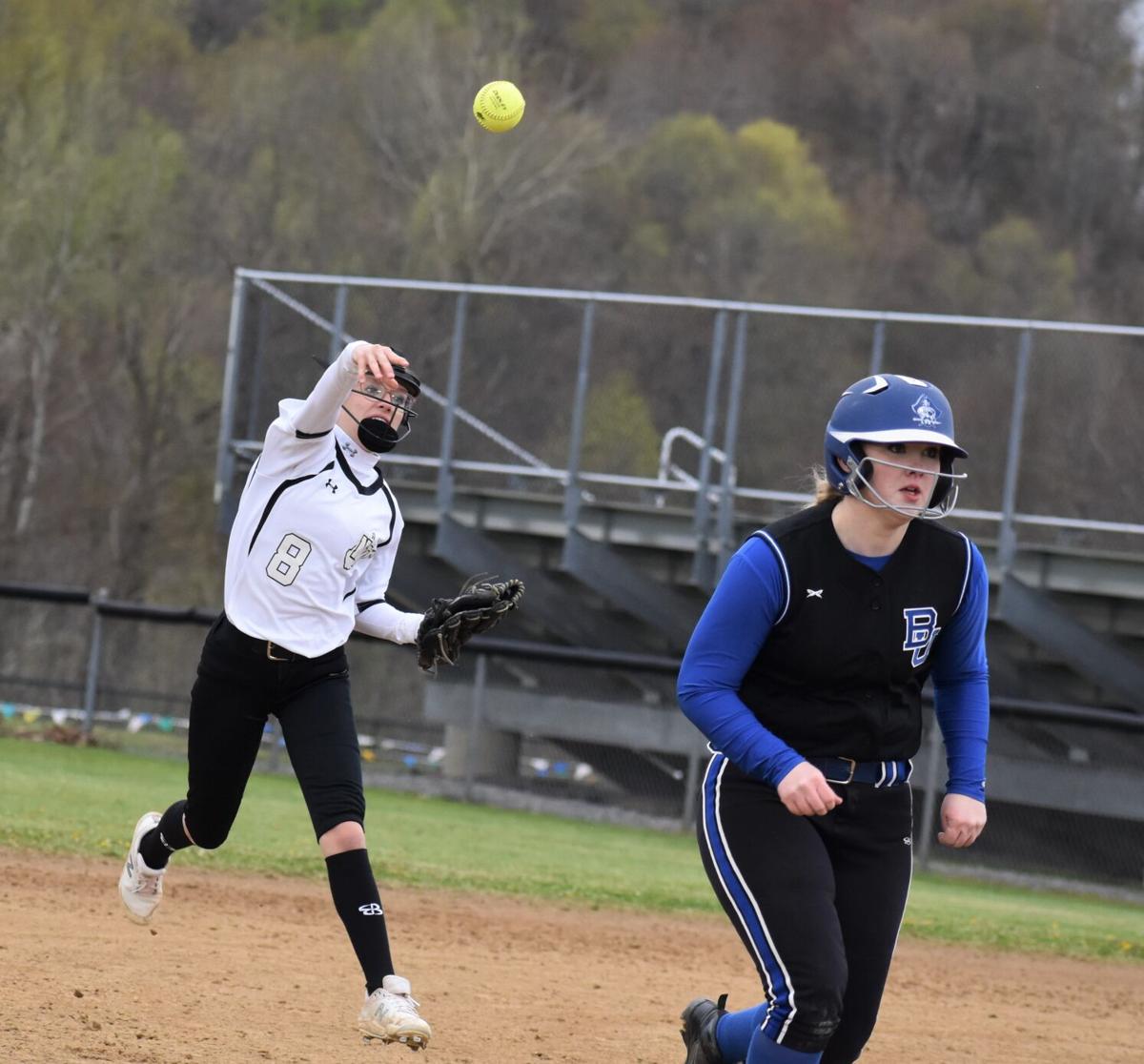 North Marion's Isabella Brescoach throws to third base in a rundown situation of Buckhannon-Upshur's Robin Ball. 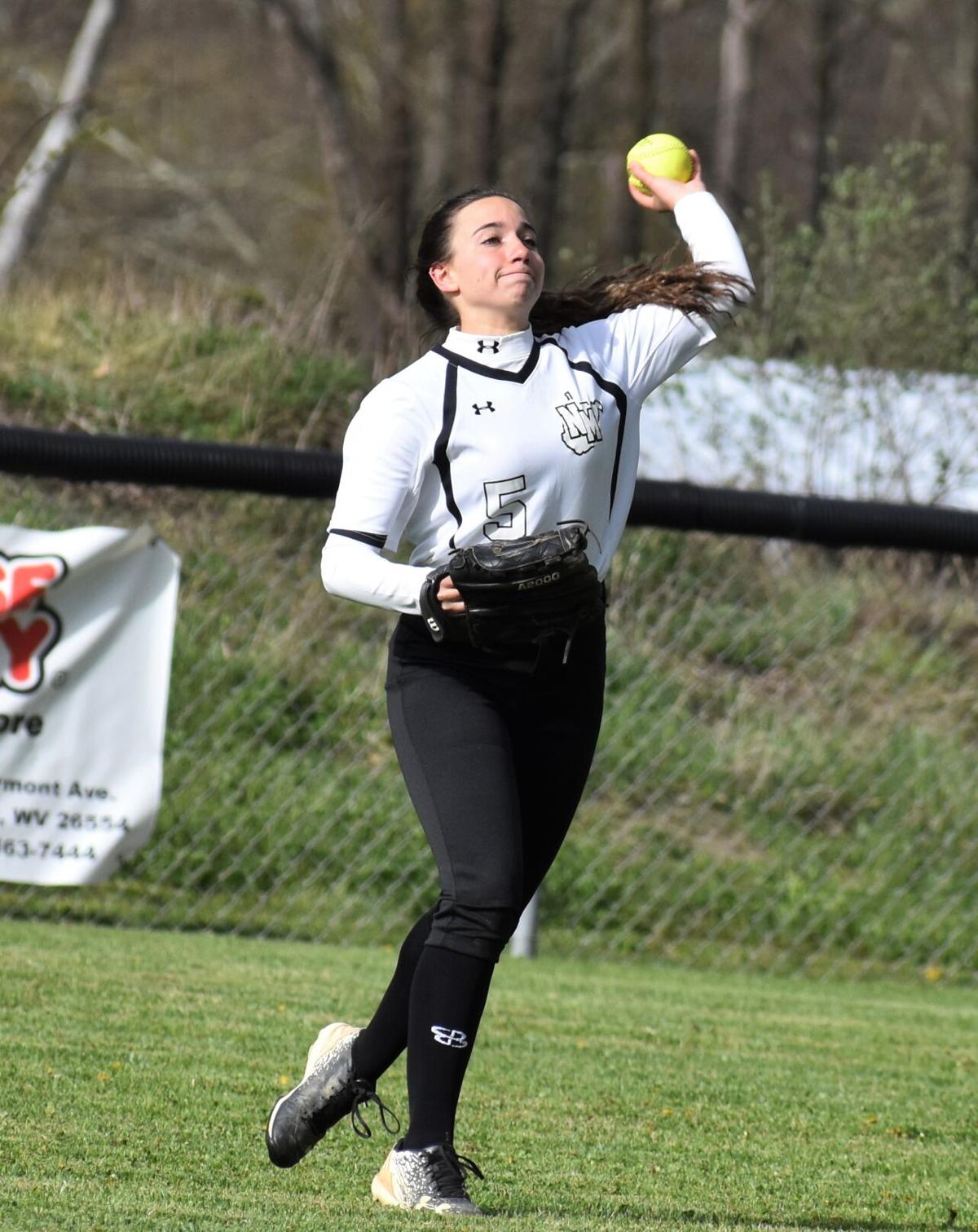 North Marion's Angelina Collins throws after fielding a ball in the outfield. 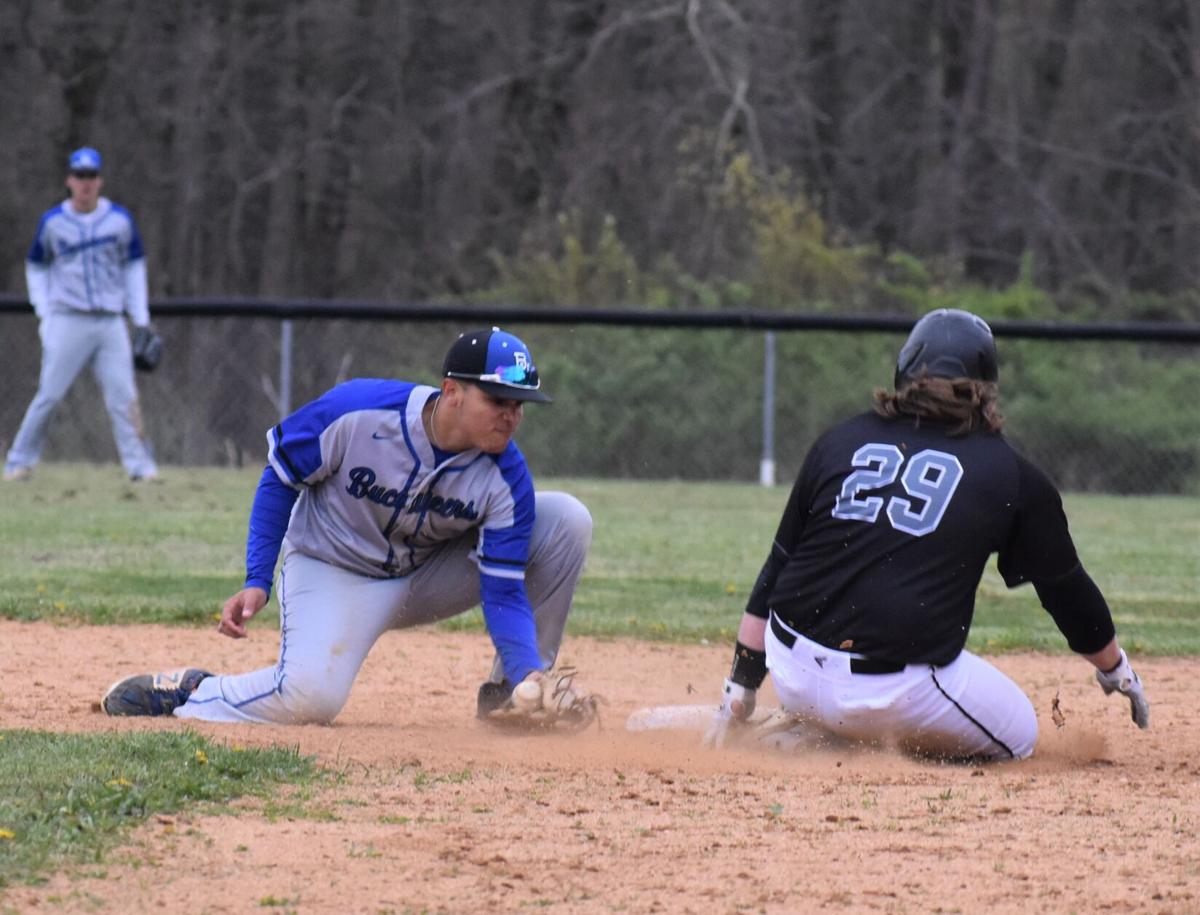 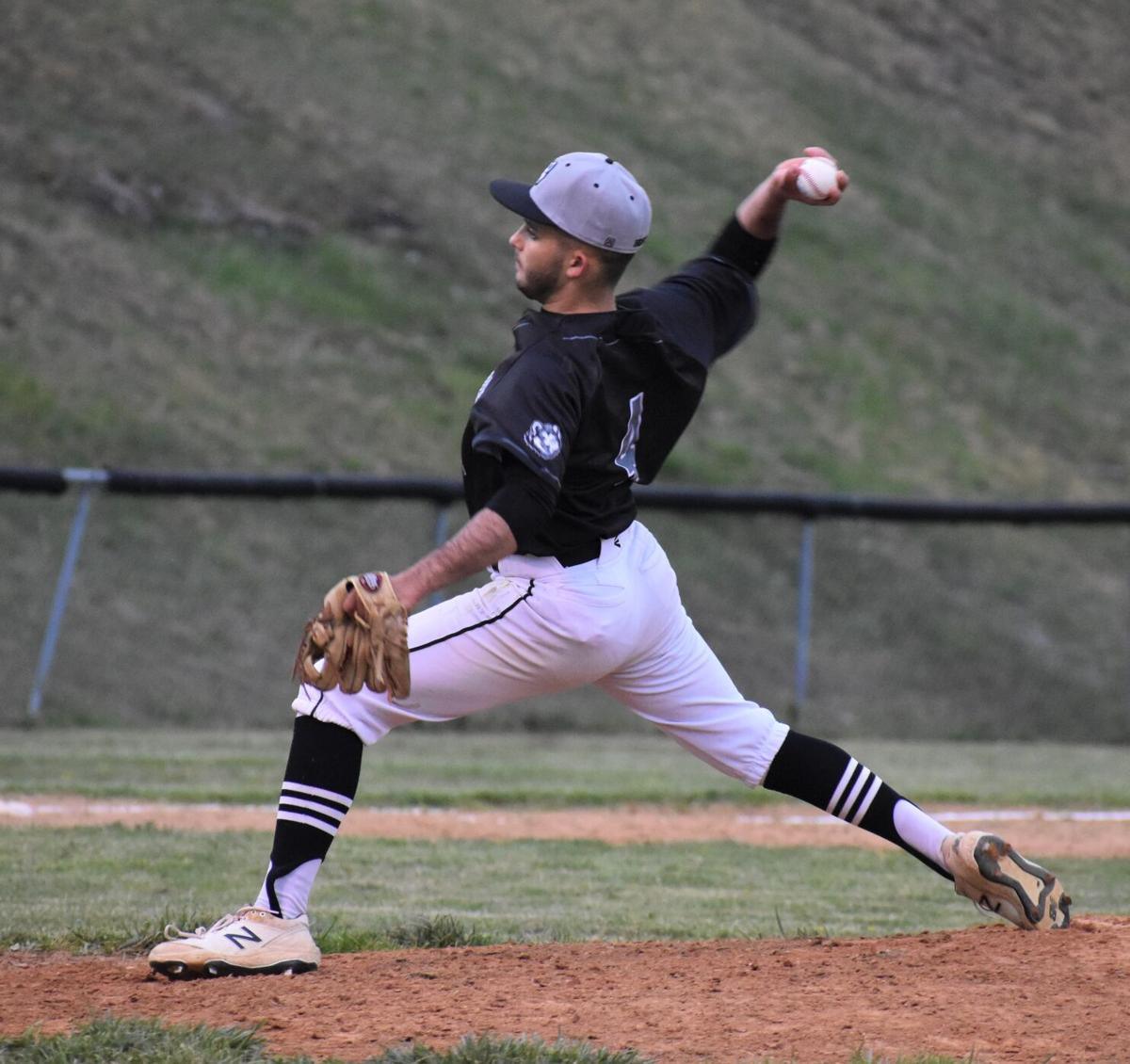 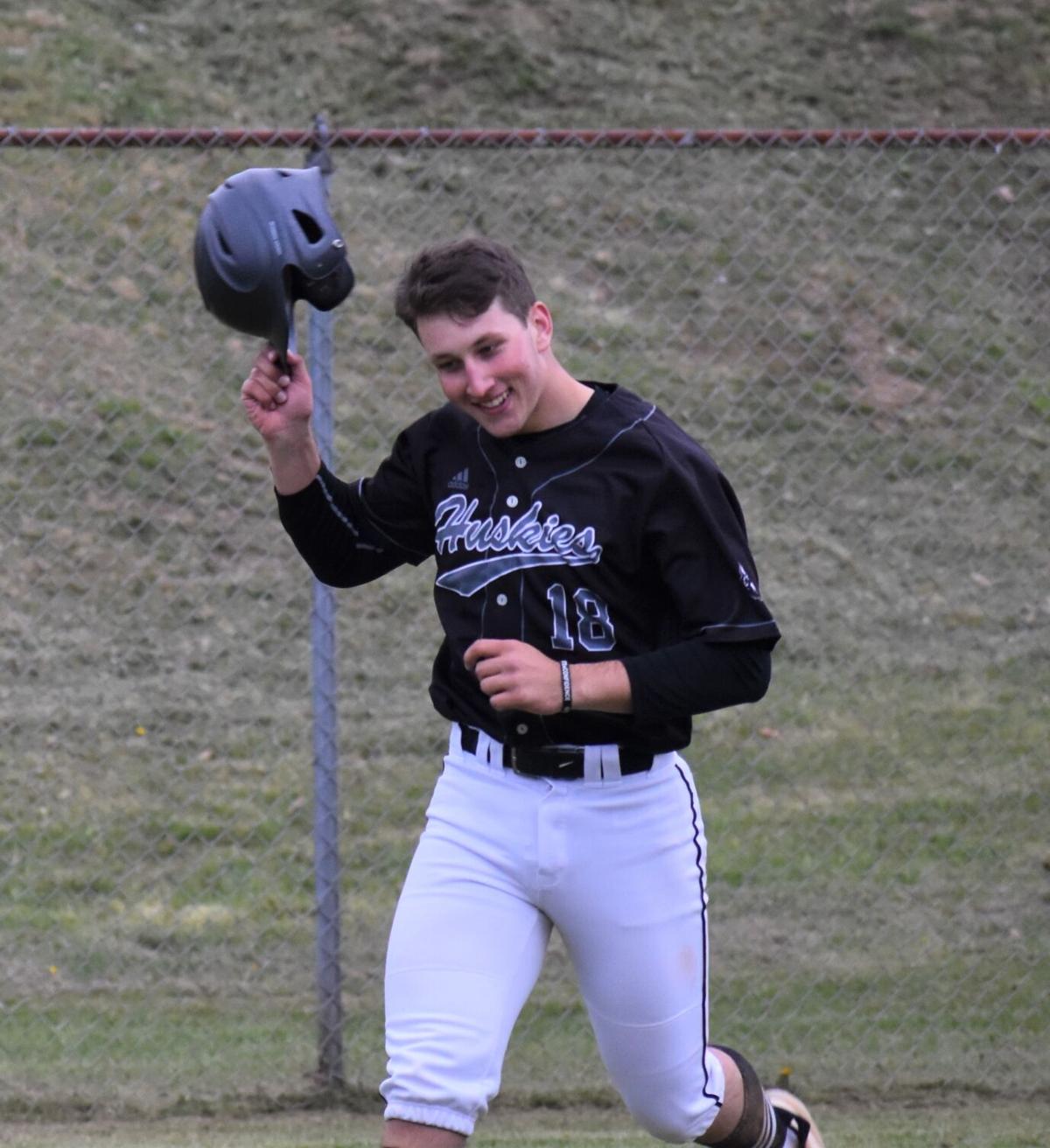 North Marion's Jace Rinehart celebrates after scoring a run as he heads to the dugout. 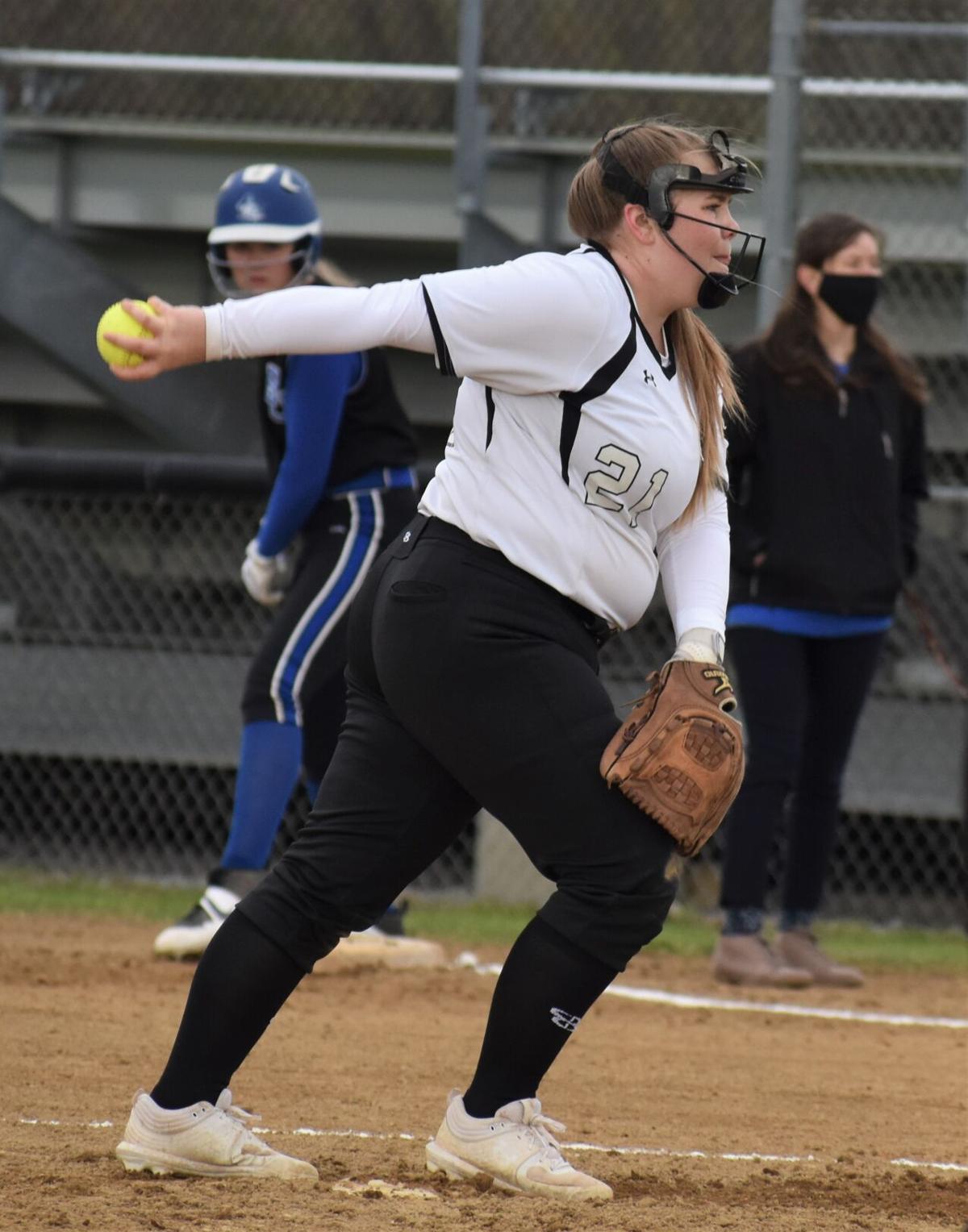 North Marion's Adrianna Floyd winds up for a pitch.

North Marion's Isabella Brescoach throws to third base in a rundown situation of Buckhannon-Upshur's Robin Ball.

North Marion's Angelina Collins throws after fielding a ball in the outfield.

North Marion's Jace Rinehart celebrates after scoring a run as he heads to the dugout.

North Marion's Adrianna Floyd winds up for a pitch.

RACHEL — North Marion’s baseball and softball teams each made their home debuts Wednesday against Buckhannon-Upshur in a pair of shortened contests that were for both better and for worse in the Huskies’ case.

The NMHS baseball team was on the positive end of Wednesday’s truncated affairs, as the Huskies blasted the visiting Bucs 14-3 in five innings. The NMHS softball team, however, was on the negative end of the spectrum, as they suffered a 16-7 defeat in six innings.

“All around, I was very pleased,” said North Marion baseball coach Vic Seccuro, whose Huskies are now 2-0 after Tuesday’s wild 11-2 extra-innings victory over county rival East Fairmont. “We got good pitching — Jace (Rinehart) started off solid — and defensively I thought we played well. We also got timely hits when we needed them, and our base running was a lot better.

“As a coach, those are all the things you want out of your team, and I saw a lot of good things today. So I’m very happy, very pleased.”

The all-encompassing showing from the Huskies against the Bucs was born out of a steady inning-by-inning display of dominance, as North Marion built up a 3-0 lead through the first inning, hiked it up to 5-0 after two, increased it further to 8-0 through three, and then exploded for six more runs in the bottom of the fourth to cruise into the fifth with a 14-0 advantage.

“We put the ball in the play very well today, we fielded very well today, we just all had a really good game today,” said NMHS junior second baseman Dylan Runner, who went 2-for-3 at the plate with four RBIs, including a three-run homer to left field in the bottom of the fourth. “

NMHS senior Jace Rinehart got the start on the mound and absolutely bamboozled the Bucs’ hitters, as he pitched four scoreless innings and allowed just one hit with six strikeouts. In the first inning alone, Rinehart tallied three Ks, as he retired BU’s 1-3 hitters in succession, all on strikes. He also recorded a strikeout in the second inning and two more in the third, as he wound up completing his four innings of work with just 52 total pitches.

Rinehart also delivered at the plate, going 1-for-2 with a pair of RBIs and a pair of runs scored.

“I knew Jace would be strong on the mound,” Seccuro said, “and I’d like to pitch him a little more, but you have to realize he’s our catcher, too, and I don’t want him getting into trouble with his arm and with him behind the plate we’re really solid. But I’m impressed with (backup catcher) Alex O’Neil, he really hung in there behind the plate and he’s been playing well.”

After Rinehart got North Marion on the right track, both on the mound and in the box, it was Runner who etched what was a thrilling and memorable two-way encore performance for the Huskies in the game’s latter stages. First, Runner made a spectacular catch in the field from his second base spot to nab NMHS’s first out in the top of the fourth when he laid out full extension to rob BU’s James Burnside of a bloop single. Then in the frame’s bottom half, Runner, with a pair of runners in scoring position and the Huskies nursing a three-run inning already, got a hold of a pitch and sent a bomb sailing over the left field fence for a three-run shot.

“I was just glad to have a good game today and get out there and play,” Runner said, when asked to pick the better of his amazing snag and three-run homer. “Since we didn’t get to play last season it’s just good to get out here and play, showcase some skills, and have fun with your friends.”

North Marion is now 2-0 with a scoring margin of plus-20 in its two victories, although Tuesday’s 11-2 win at East Fairmont was hardly anything like Thursday’s rout. The Bees and Huskies went right down to the wire Tuesday as they were gridlocked at 2-2 heading into extra innings before North Marion busted loose for nine runs in an instant to claim the victory.

“That was unbelievable, I’ve never saw anything like that,” Seccuro said of the team’s win over East Fairmont. “It was 2-2 and they could’ve won the game in the bottom of the seventh, but we go extra innings and we happened to score nine runs. We got a couple of nice hits in there, and that’s the way baseball is sometimes.”

The extra-innings explosion by the Huskies was directly tied to the exit of Bees’ ace pitcher, Cole Peschl, who had the Huskies’ hitters subdued for the majority of the game.

“You got to give them a little credit,” Seccuro said of East Fairmont. “I thought Peschl kept us off balance a little bit, he looked good and that’s always big if you have that pitcher who can do that, because he got out of some jams where we had (runners) on second and third like three times.”

The thrilling win by North Marion against East Fairmont, however, was offset by the Lady Bees handing North Marion a 9-1 loss on the softball diamond, and the Lady Huskies couldn’t quite bounce back Thursday against the Lady Bucs as they fell to 0-2. The Lady Huskies’ struggles on Thursday started early as they allowed eight runs in the top of the first, many of which were the result of either fielding errors or wild pitches. NMHS starting pitcher Adrianna Floyd gave up only two hits in the top of the first, but Buckhannon mustered an additional eight base runners by way of walks, errors, and one hit by pitch.

North Marion took a chomp out of the 8-0 hole in the frame’s bottom half courtesy of a big-time, two-run bomb of a homer over the center field fence by junior third baseman Ashley Winans. But the Bucs immediately tacked on an additional run in the top of the second, and then BU starting pitcher Jansen Kimble recorded two strikeouts for a clean bottom half to put Buckhannon up 9-2 through two and on the fast track to a victory.