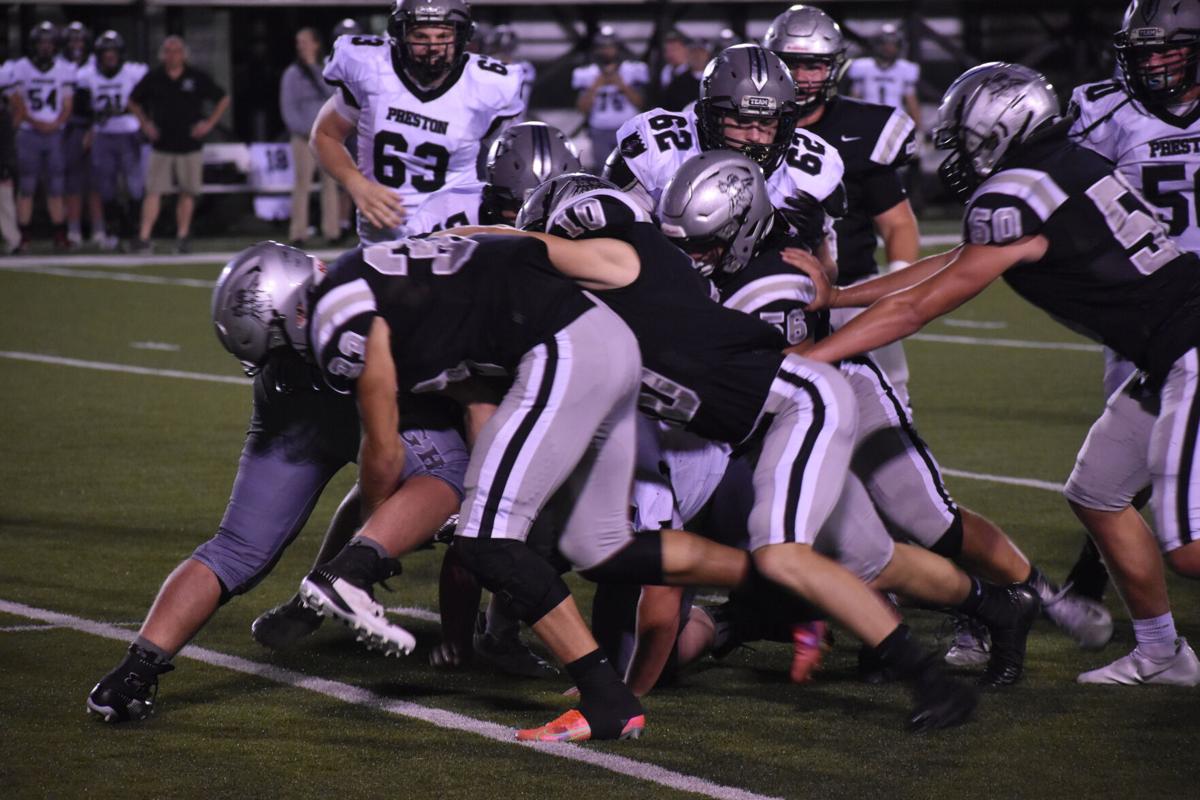 Preston County's Levi Lowdermilk is swarmed at the line of scrimmage by North Marion defenders. 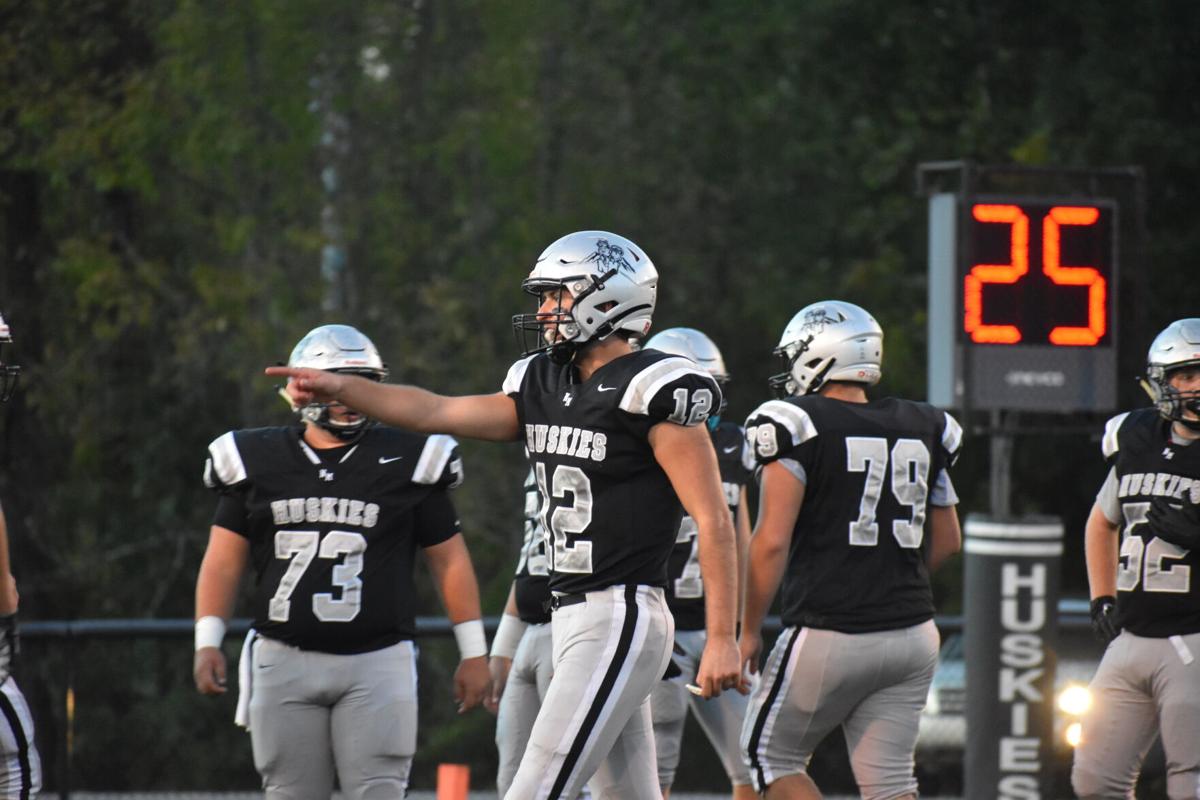 North Marion's Brody Hall warms up before the Huskies' game vs. Preston County. 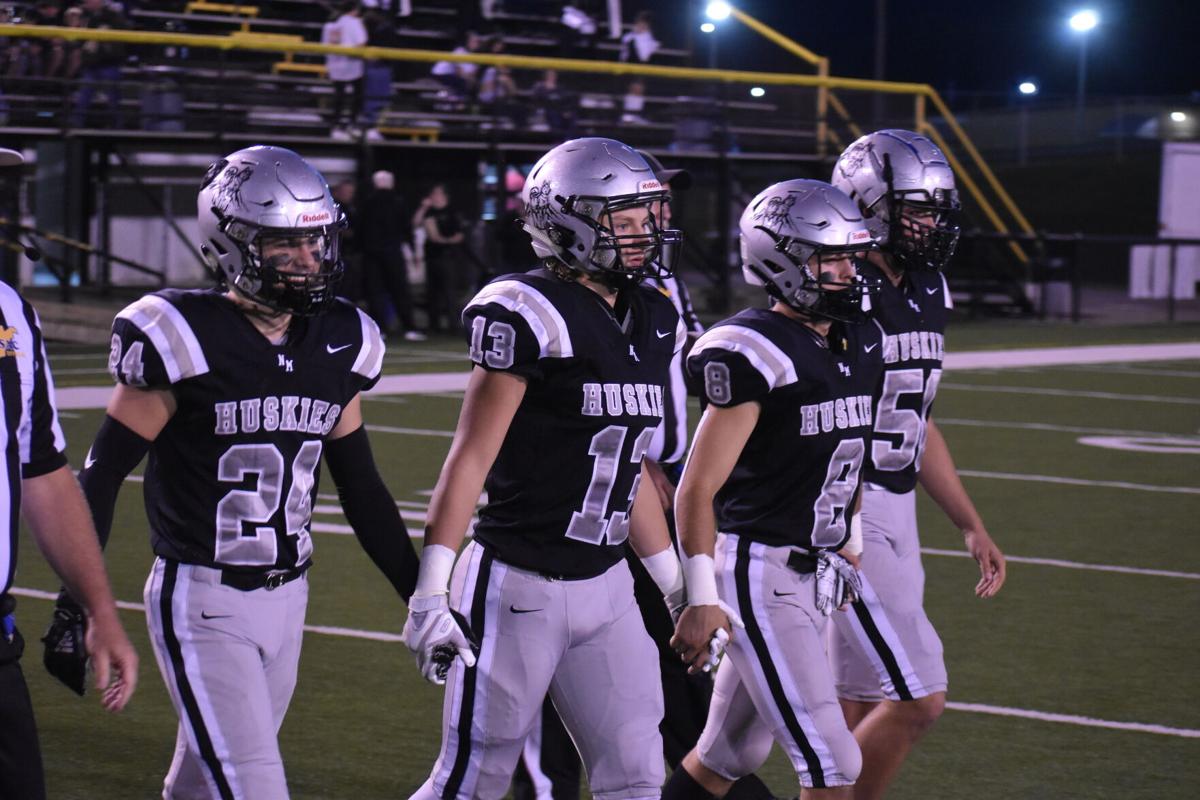 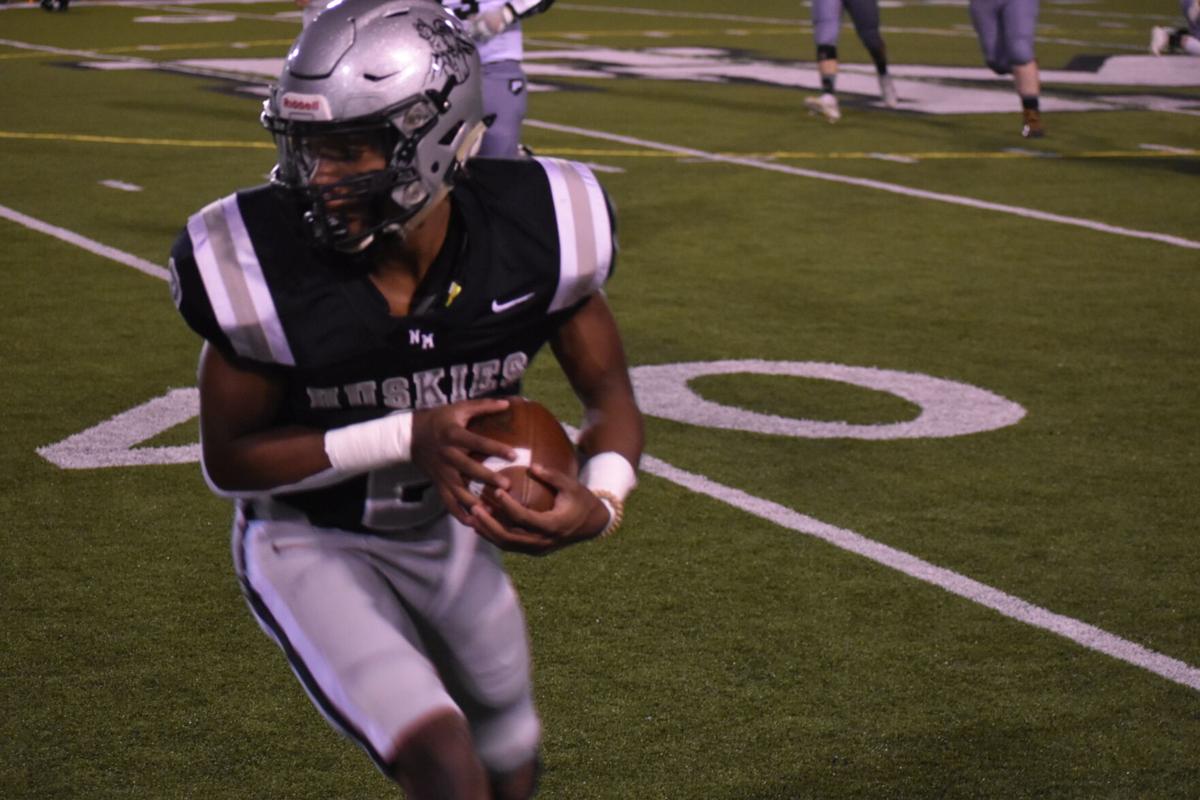 North Marion's Tariq Miller gathers a pass along the sideline at Woodcutters Stadium. 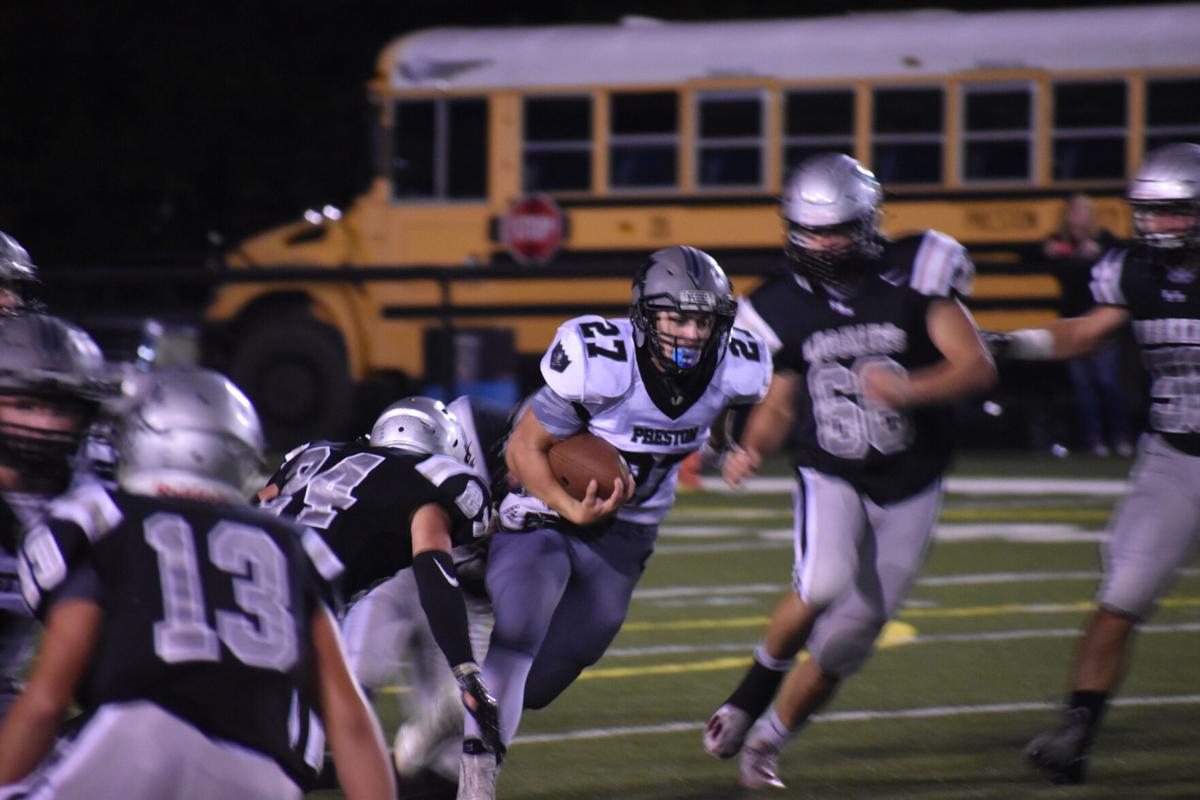 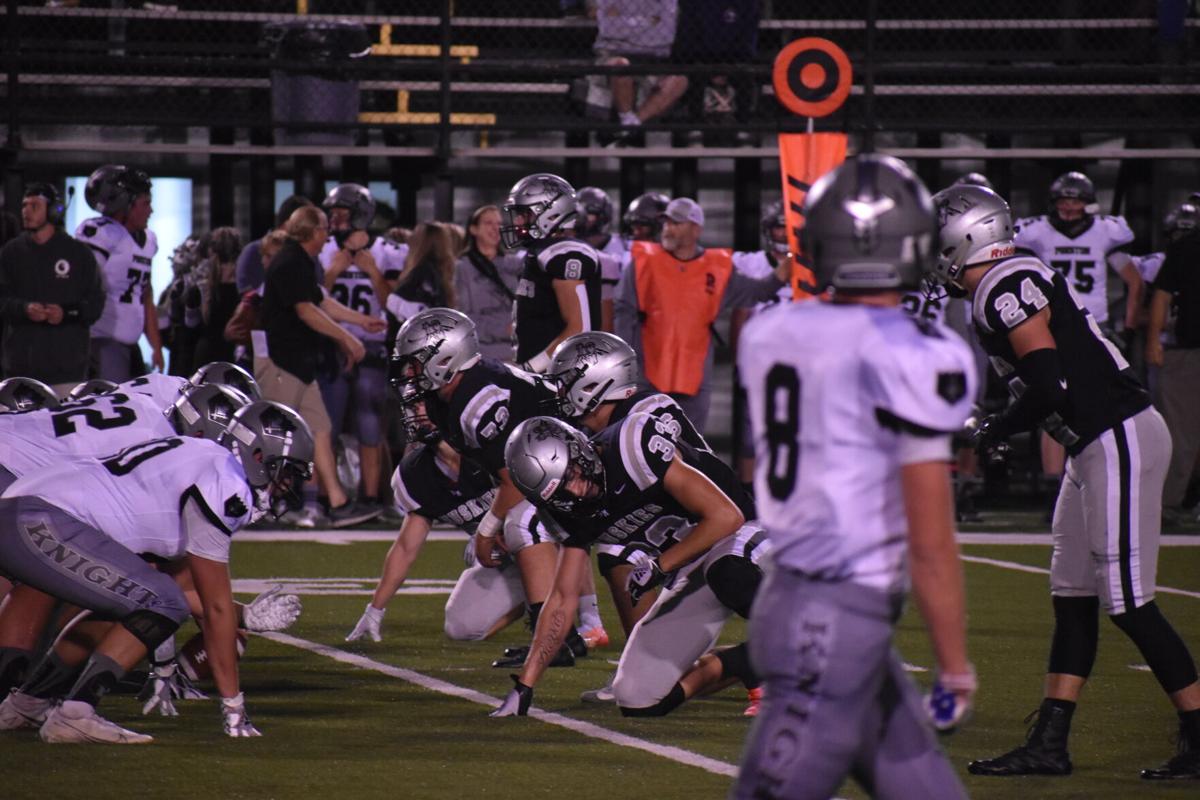 The North Marion defense lines up against the Preston County offensive line at Woodcutters Stadium. 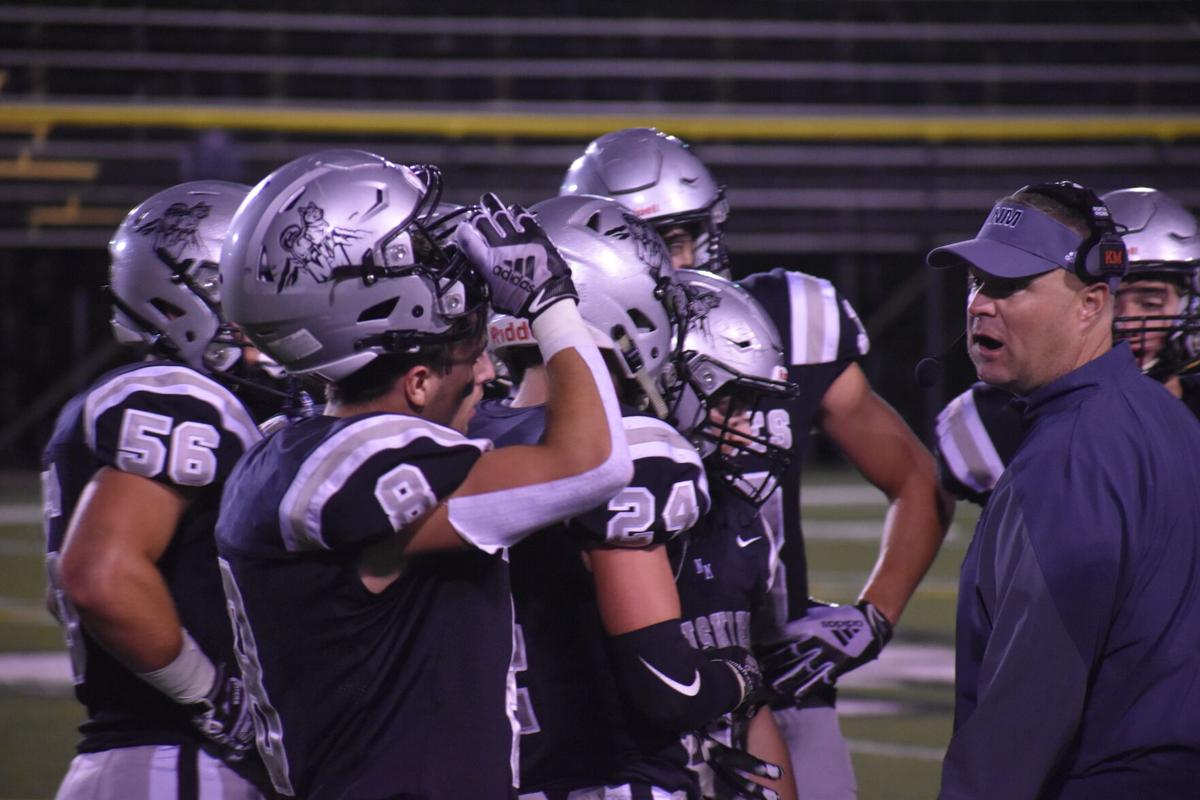 North Marion huddles during a timeout in their game against Preston County. 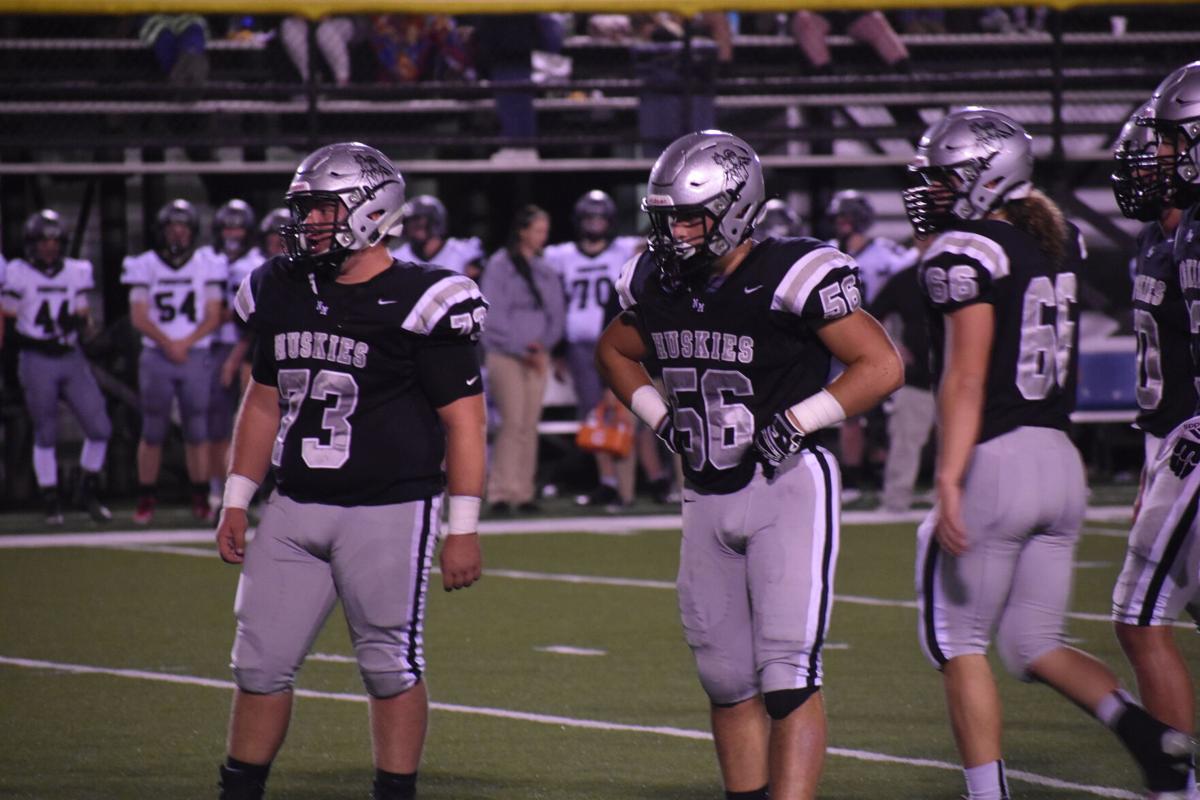 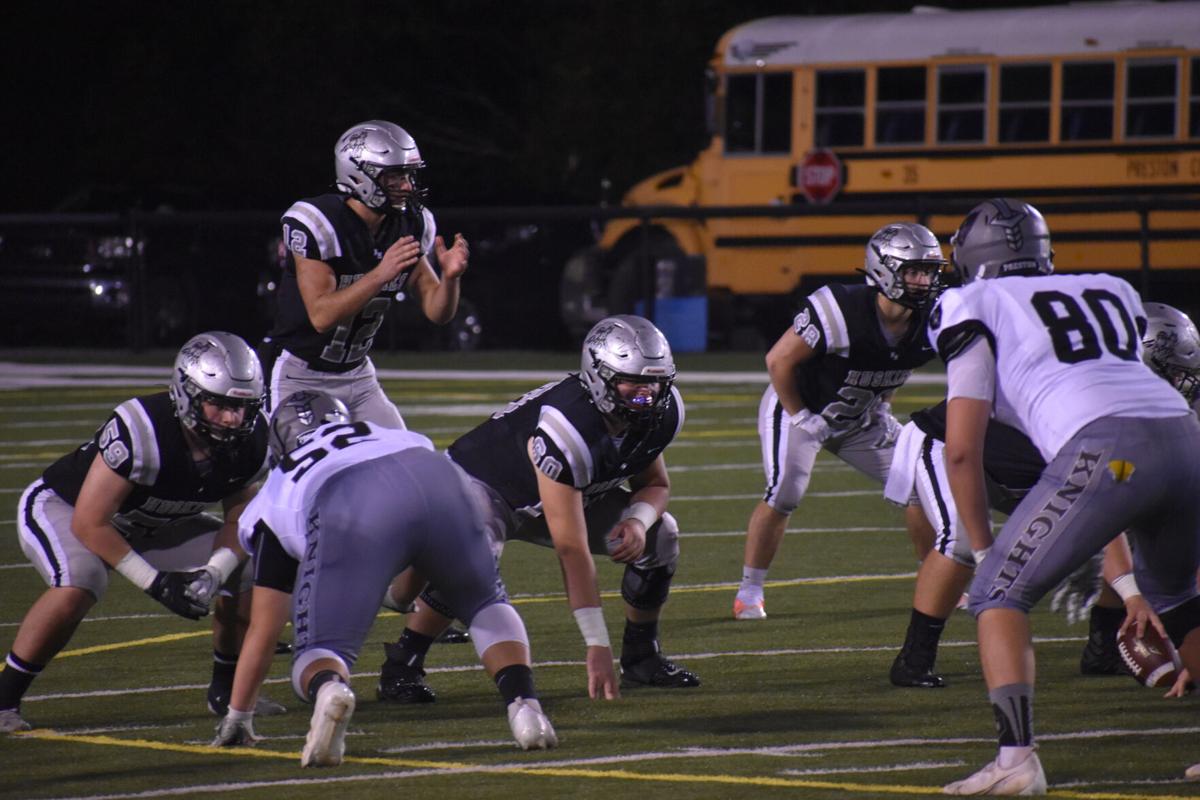 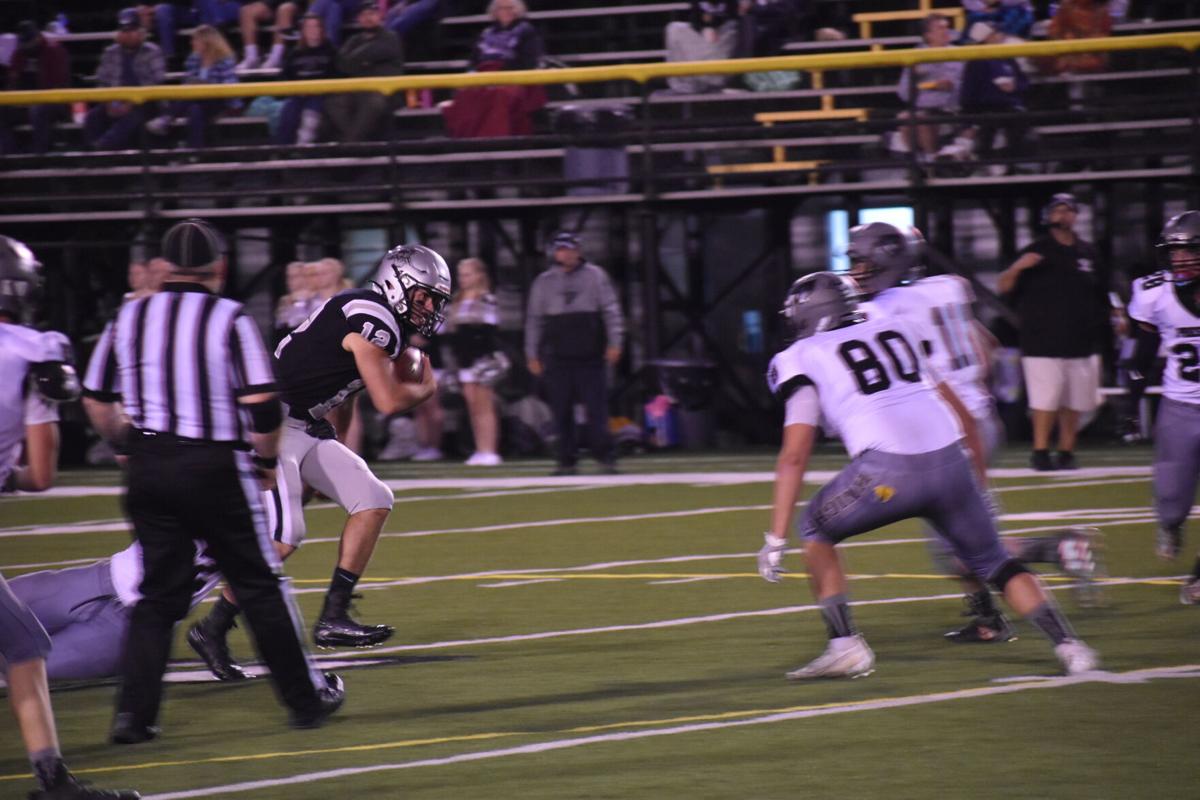 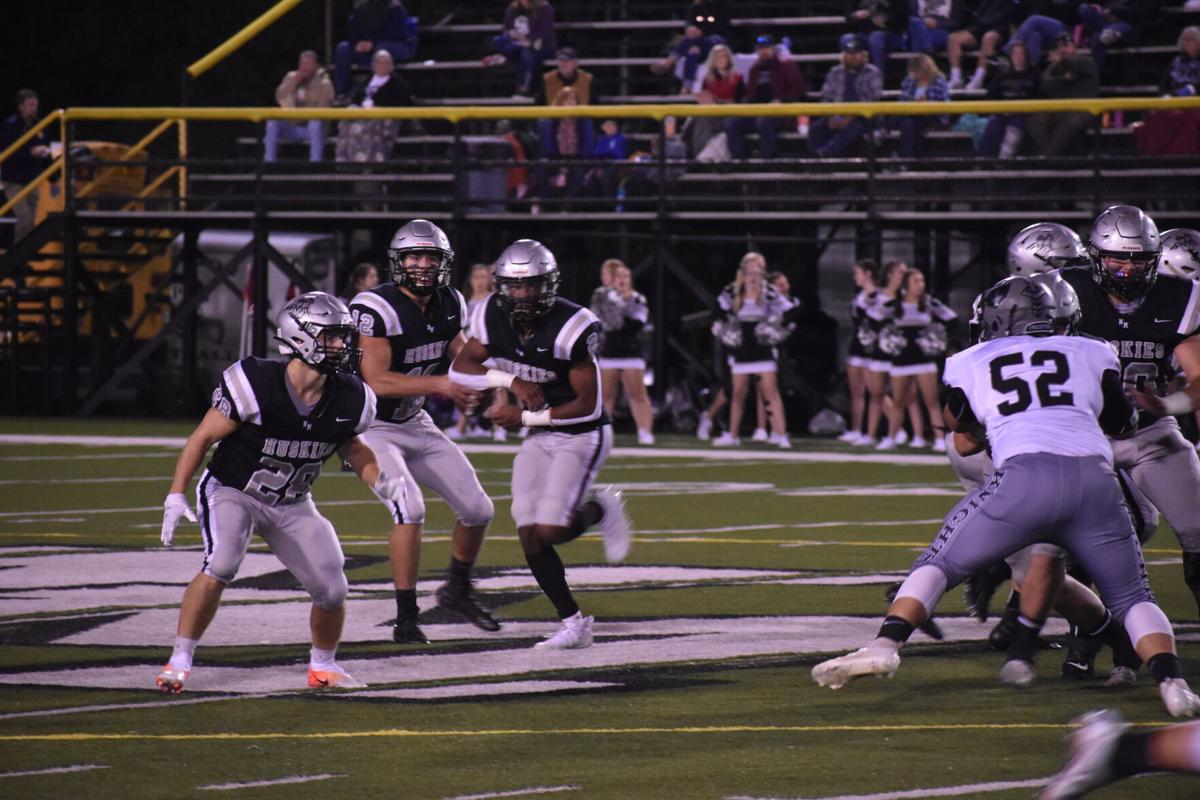 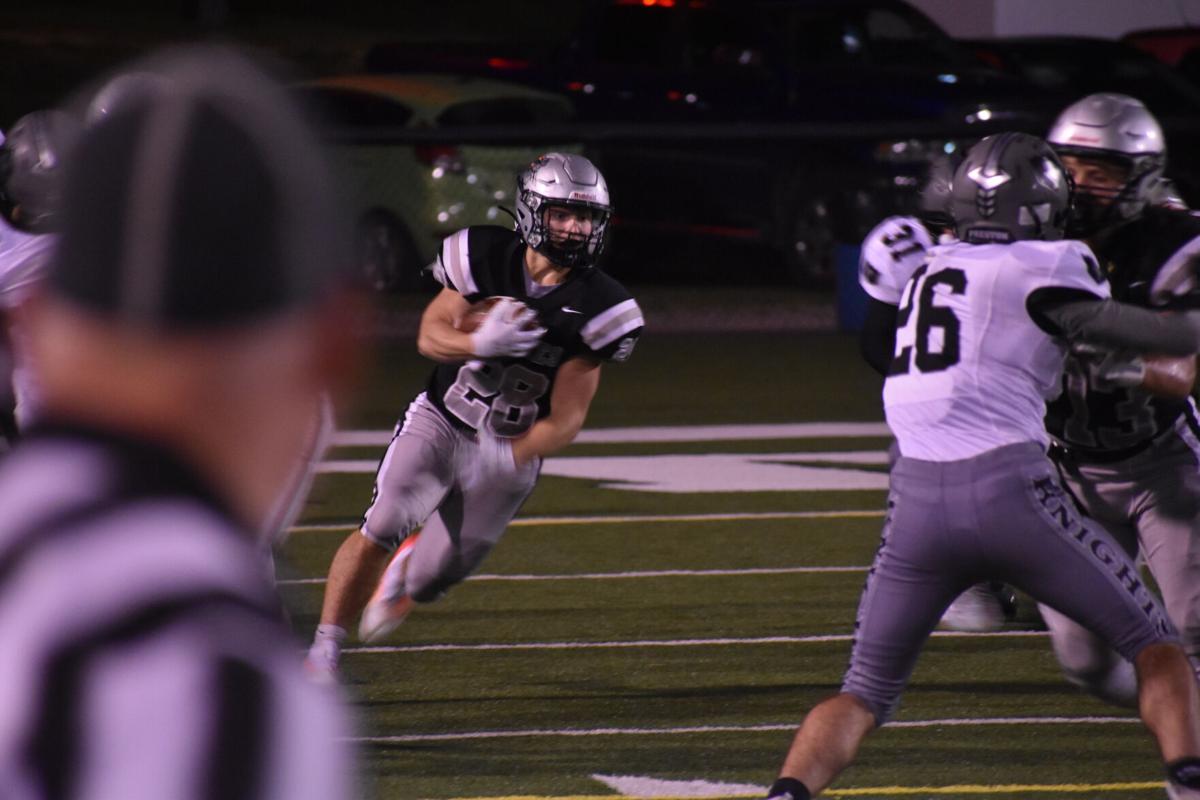 North Marion’s Gavan Lemley runs to the outside against the Preston County Knights. 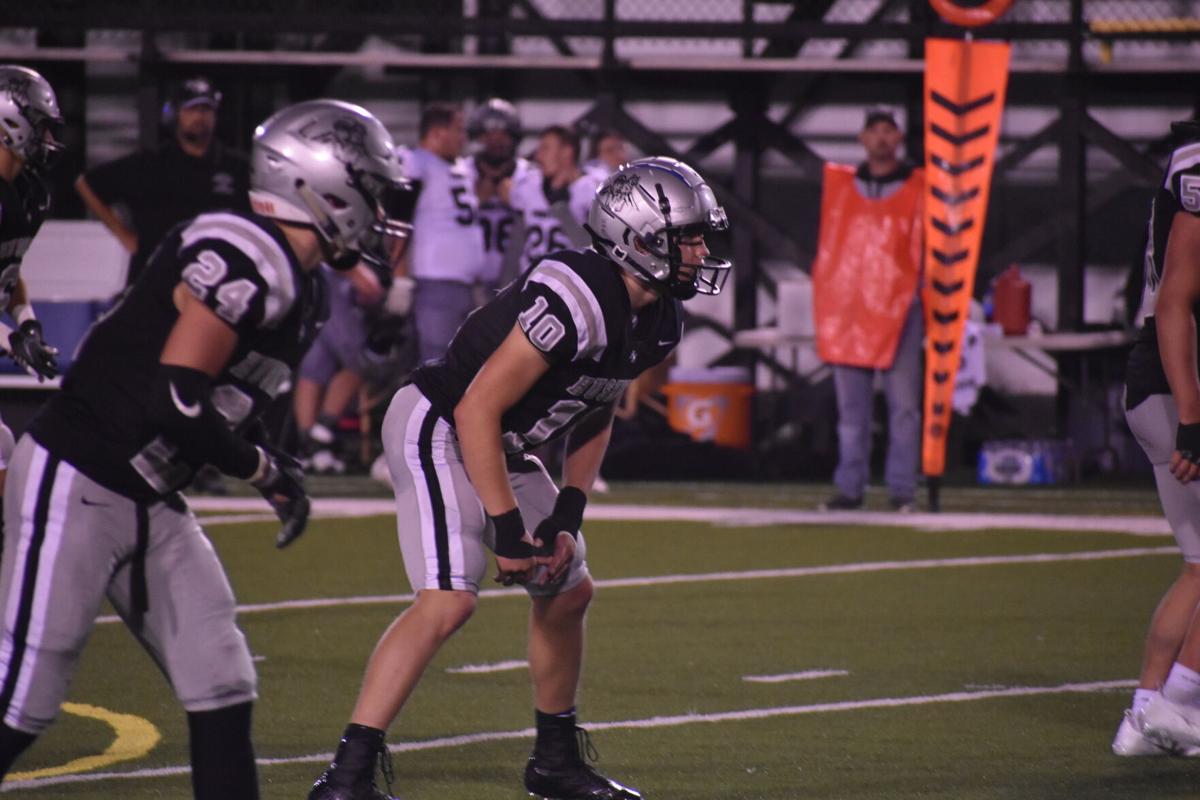 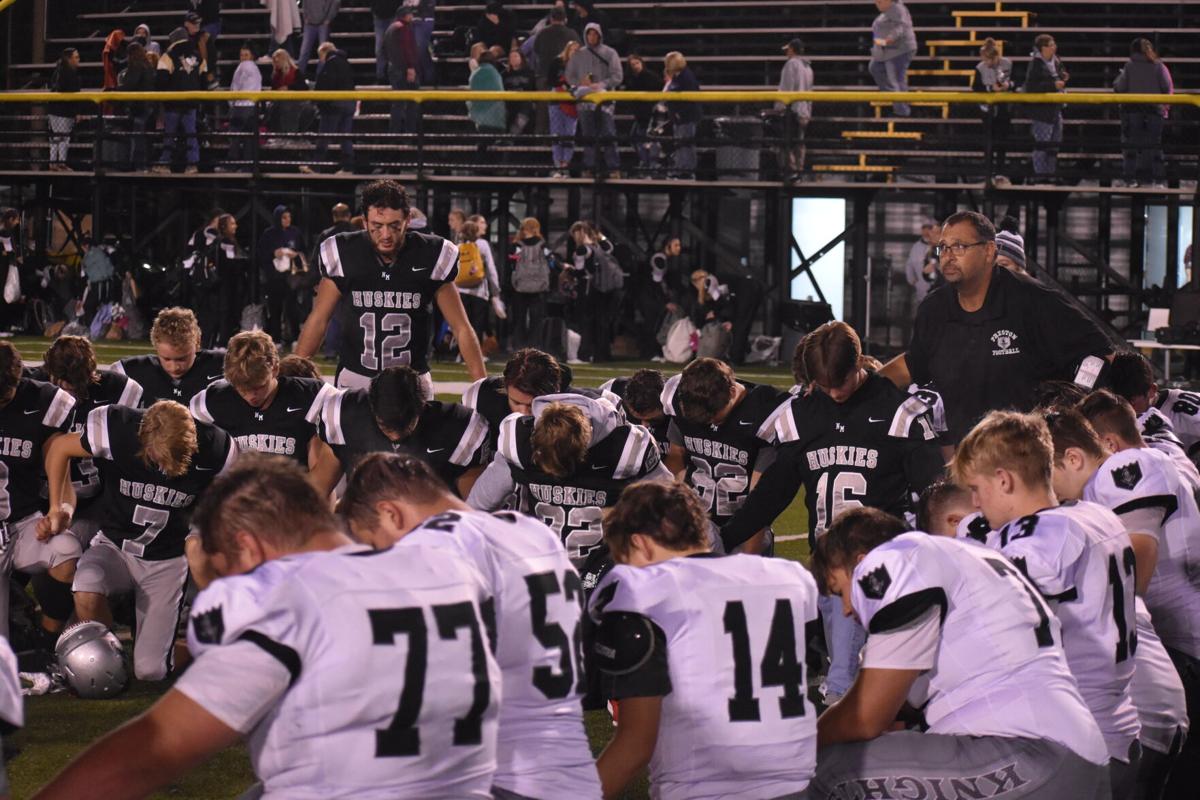 North Marion and Preston County huddle together after the game in prayer, led by North Marion's Brody Hall.

Preston County's Levi Lowdermilk is swarmed at the line of scrimmage by North Marion defenders.

North Marion's Brody Hall warms up before the Huskies' game vs. Preston County.

North Marion's Tariq Miller gathers a pass along the sideline at Woodcutters Stadium.

The North Marion defense lines up against the Preston County offensive line at Woodcutters Stadium.

North Marion huddles during a timeout in their game against Preston County.

North Marion’s Gavan Lemley runs to the outside against the Preston County Knights.

North Marion and Preston County huddle together after the game in prayer, led by North Marion's Brody Hall.

RACHEL — It had been a while since the North Marion faithful got to watch their Huskies play under the lights on the gridiron.

Having their season thrown out of whack due to different COVID issues, the Huskies took to Woodcutters Stadium Thursday to play the Preston County Knights — North Marion's first action since their week three loss to Fairmont Senior.

The Huskies secured a 31-12 victory over the Knights, in a game where North improved as the game went on.

At the onset, however, the Huskies did not come out like their coach would've liked.

"We were flat," North Marion head coach Daran Hays said. "We were excited to get out to practice, but I thought we looked really lethargic and out of character today."

North's first drive ended after quarterback Brody Hall was sacked on third down, but North would get their own defensive highlights on the ensuing Preston drive, with Landon Boone and Harley Sickles getting to the quarterback on the Knight's first pass attempt. Preston County only attempted three passes in the first half.

The game remained scoreless after the first quarter. North broke the tie with 9:50 remaining in the second quarter, as the Huskies got two chunk plays by faking jet-sweeps to Tariq Miller.

A pass to a wide-open Landon Frey on play-action went for 22 yards to get the Huskies into the end zone. And Hall would score himself after faking it to Miller before taking off and powering through multiple Knight defenders for a six yard touchdown. Hall would finish with 42 yards and a touchdown on seven carries to go along with completing eight of 12 passes for 130 yards and an interception.

Preston County's Ethan Harper tied the game with a four-yard run after a nearly eight-minute drive where Harper carried the ball 12 times. Harper and fellow back Levi Lowdermilk bruised the Huskies' defense all night. North held up well on paper, never allowing a run more than 10 yards and recording several tackles for loss from Harley Sickles, Tyler Curry, and Cody Clevenger, the bruising duo of Harper and Lowdermilk who most often made consistent, modest gains.

"[Harper] ran the ball extremely hard," Hays said. "Wasn't looking to score touchdowns on every run. He was just looking to gain forward yards and we were just riding him like a show pony all the way down to the turf for a four yard gain."

Harper finished with 31 carries for 101 yards and a touchdown. Though the Knights' would end up passing the ball 15 times, they clearly came into Thursday's matchup with a run-first mentality, only choosing to air it out when the point differential grew. Deploying plenty of heavy sets, the power run game proved a challenge for the Huskies.

"These true three-back, 31 personnel, 32 personnel teams, the key is really getting a negative," Hays said. "I feel like every time we got a negative we were in good position, whether it be by penalty, by a negative play, getting them when they ran toss, throwing an incomplete pass — which is a zero, but I kind of chalk it up as a negative — they weren't able to have explosives to the point where they could move it in two downs."

To combat the ground-bound attack, North resorted to using five down linemen, and loading up the box.

"We played some bear when they started playing straight 31 personnel and covering up all those guys," Hays said. "That's something we're going to struggle with a little bit because of size on the defense. Our defensive line is really good, but they're so used to playing in spread-out situations that at times you struggle when someone brings a true power gap scheme coming right at you — especially when they're 280 and 300 and we're 220, 230."

After Preston's slow, methodical drive left 1:47 on the clock, the Huskies offense exploded down the field, with a 31-yard Tobin Cruz reception setting up Gavan Lemley for a two-yard touchdown to retake the lead which North would only build upon as the game went on.

Lemley ended the game with two rushing touchdowns as the Huskies' lead back.

Miller started the second half off with a bang, returning a punt 66 yards with 10:14 to go in the third quarter, stretching the Husky lead to 18-6. Lemley would rush in once again from two yards out with just over two minutes in the frame to make it a 24-6 ballgame.

The clock showed 0:30 in the third quarter when Preston completed their first pass, and got their second just as the quarter ended. The Knights' drive was shaping up to be another time-consuming effort, going over six minutes, but all the work and hard-earned yards proved futile when Miller made his presence known on defense, snagging an interception in the red zone and taking it all the way back for a pick-six. 31-6 North Marion.

Miller filled the stat sheet Thursday, turning in three catches for 56 yards, two carries for 10 yards, a punt return touchdown (with a second one called back because of a penalty), and a pick six. With a few targets thrown his way that he did not reel in, it was not quite a perfect performance for the star receiver, something his coach let him know after the game.

"The one thing about Tariq is if he struggles in one area of the game he makes up in the other side," Hays said. "I jokingly said to him — 'Do we need to recruit the quarterback of the other team? Because you didn't seem to have as much trouble catching his balls as you did Brody's.' Those drops are really uncharacteristic for him, he's just letting the ball get into his pads a little bit. I was really happy to see him get a couple good carries for us in the run game, made a couple crucial catches, and then of course the two punt returns — the one that got called back I wasn't a big fan of, I went back and watched it on the TV, I'm not really sure.

"You see him make plays there, then defensively you see him bait the inside hitch route and breaks on the inside, and when he catches that thing it's pretty hard to catch him."

Preston's Harper got into the end zone again, but the scoring drive took another chunk of time off the clock, as the Knights couldn't generate explosive plays on offense. Churning all the way down to the one-yard line, Harper scored with 1:29 to play in the game. North would run a couple plays with their backups before the buzzer sounded and the score was cemented at 31-12.

With North pressing the play button on their season after more than two weeks off, the Huskies move over .500 to 2-1, and play Elkins next week. Until then, Hays sees some things to work on.

"Preston played really inspired tonight; we got a really bad habit of playing to the level of our competition right now," Hays said. "We played pretty high-level football against Fairmont Senior, particularly on the defensive side of things, but then in the East side game we didn't play very well. Then of course tonight I don't feel like we played very well. The nice thing was we were able to score in all three facets of the game which is something we talk about frequently. That was a positive but there's not a whole lot of positives to take out of this, we need to learn to play with some emotion."