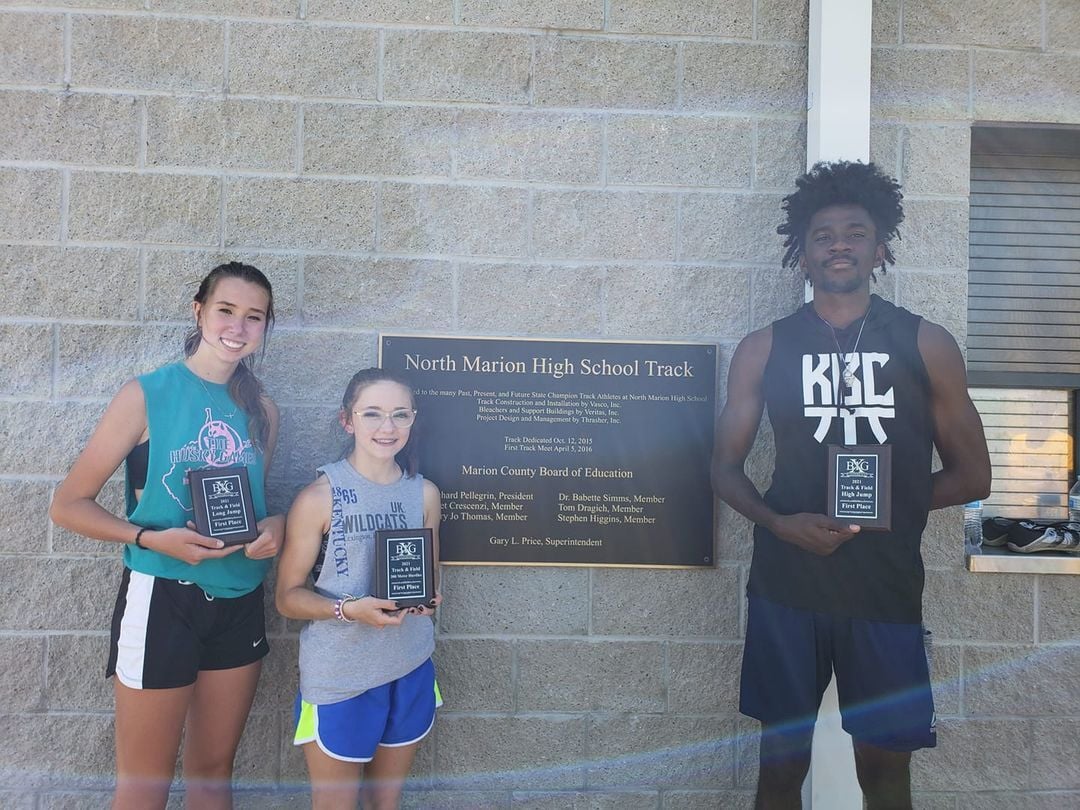 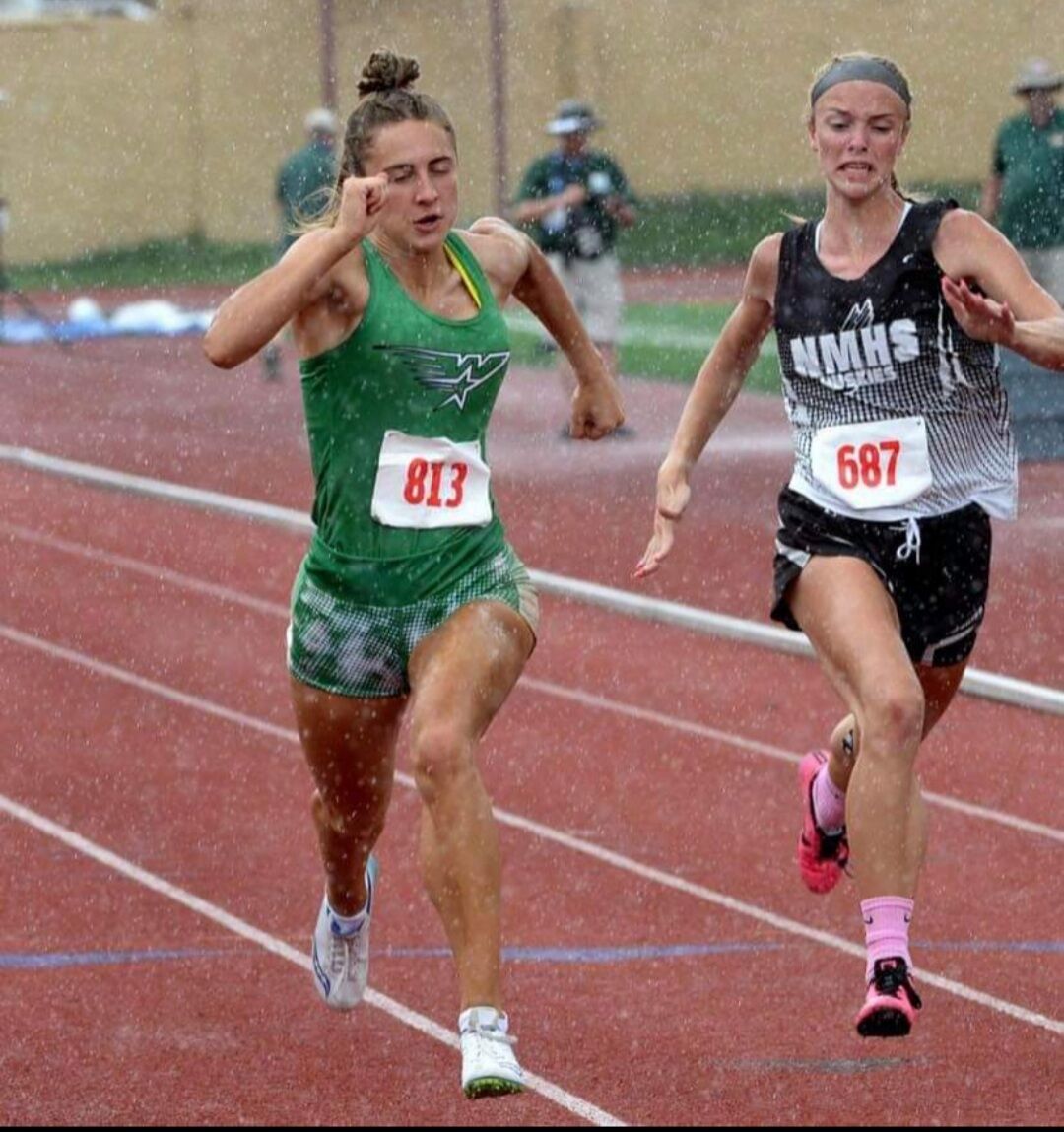 RACHEL — The North Marion Huskies’ boys and girls track teams are learning that success can be measured in different ways.

For the girls, this past season was one of realized potential, with a young squad qualifying 13 of their 14 athletes for the state meet on June 11. They ultimately secured a second-place finish with standout performances from young women who did not have any experience at states prior.

For the boys, the season was more of a struggle. The team had multiple athletes qualify for state, however the team’s achievements came less from their performance on the field, but by way of their growth during a tough season.

Growth is a key word for the entire North Marion track program these days, as both teams are at the beginning of what could be a long stretch of continuity with their current teams.

The girls fielded six freshmen and lost only one senior— Aubrey Payton, who placed sixth at state in shot put even after suffering an ankle injury in the conference meet.

The boys are a young squad in their own right, losing just two seniors. One senior, Praise Chukwudozie, started with the track team just this season, and qualified for state in three events, placing fifth in the high jump.

With so many new faces that should be around for years to come, the past season served as a sort of reset for the Huskies, but that wasn’t the expectation originally. The pandemic stopped the 2020 season from happening altogether, and changed this past one considerably. That uncertainty hurt the turnout for the track teams.

“We didn’t have a season last year,” North Marion boys track coach Keri Richardson said. “And with school being in-and-out, we had a lot of kids that should’ve returned that decided not to with COVID. And we just didn’t get new people out like we thought we would.”

“With COVID going around, lots of parents are a little eerie, and you can’t really blame them,” North Marion girls track coach Jeff Crane said. “We lost a few to that.”

While the track teams’ combined numbers usually get into the sixties, this year was not even half that. The changes didn’t stop at the team size, though.

The start of the season was pushed back, and the season itself was compressed. The usual season, starting in late February or early March and ending in May, turned into an April through June sprint, with teams sometimes going to multiple meets every week. Luckily, if there’s one thing track athletes are used to, it’s a sprint.

The first few weeks of the season were dedicated solely to practice and conditioning, as many athletes had been off for over a year.

“We worked pretty hard those first few weeks of practice just trying to get everybody back into shape,” Richardson said.

The challenges for Richardson and Crane did not stop at conditioning, but also teaching them the practices and principles of the sport.

The absence of a 2020 season created, ostensibly, two freshmen classes, as the group that were technically sophomores had yet to play in high school.

“Crane and I forgot that a lot at the beginning of the season,” Richardson said of the teams’ inexperience. “We would get ready to start a workout and we’d say ‘Go to this spot,’ and they all look at us, and we’re like ‘Oh ya, you’ve never done track before.’ So we were just getting them into it, interested in it, letting them know how everything goes.”

With a small group short on experience, expectations had to be tempered accordingly, but for the girls team, Crane quickly saw what he might have with his young athletes.

That potential very quickly turned into concrete capability for the girls team. Crane’s team had eight meets, not counting conference or state, and the lowest they placed in any of them was third. Many of these meets were against pedigreed AAA teams, like Jefferson, and Morgantown — who were the state runners-up for AAA — and teams from the Charleston and Spring Mills areas.

“Running against those kind of teams and having success against them, those to me were times when you thought ‘Hey, we might be onto something here,’” Crane said. “They fared a lot better than I thought they would. Not that I didn’t have confidence in them, but they were a young bunch, and I told them — every time I threw them into the fire they just put it out and kept going.”

The Huskies’ girls team would keep it going all the way to state, where they secured second place, highlighted by athletes like Lauren McGinty, a freshman who finished second in the 300 meter hurdle, Gabby Conaway, a freshman who placed third in the long jump, and junior Abby Masters, who placed second in the 200 meter dash, third in the 100 meter dash, and was part of the second-place 4x400 meter relay team.

Masters anchored the relay, which also included McGinty, Trinity Hine, and Cierra Parker. Hine and Parker were a sophomore and a freshman, respectively.

The North Marion girls sat at fourth before the relay, but the clutch performance by the Huskies vaulted them into second.

“We did well,” Crane said. “Matter of fact, we did exceptionally well.”

Even though the boys didn’t break any records at meets, they were focused on breaking their own records and meeting the goals they set for themselves, be it a sophomore looking to break some times he had ran in middle school, or a freshman baseball player who had not run track before trying to reach a certain mile time.

“We looked towards individual goals and all of them got so, so close,” Richardson said. “If we were to have one or two more weeks of the season we would’ve hit a lot more of those little goals. Everybody dropped their times down.”

Richardson and her team will have another chance to reach those goals next season, as both teams see a bright future ahead.

“With a second place finish at the state track meet with 13 girls, you can’t help but have really high expectations for next year,” Crane said. “I’m not saying we’re going to walk in there and win the whole thing, but we have that experience and talent coming back next year.”

Something both coaches are hoping for is a greater participation rate, and Richardson sees different reasons for why both teams should get their wish.

“Seeing the girls success, with only 14 of them out there, will really help build the girls side of it,” Richardson said. “On the boys side of it, seeing the struggle may get people to think ‘I need to get out there and help out.’ Maybe the kids already on the team will try to get some more kids to join. So I think in both situations, the success and the struggle, will hopefully get some more kids out.”

Richardson and North Marion’s boys team are hoping to build on the bedrock they’ve set up, and for Crane and the girls, they have their sights set on competing once more with their young core, which now has some experience to lean on next season.

“For a few years down the road here, you would think we would have some success,” Crane said. “And, of course, that depends on how much they are willing to work at it.”