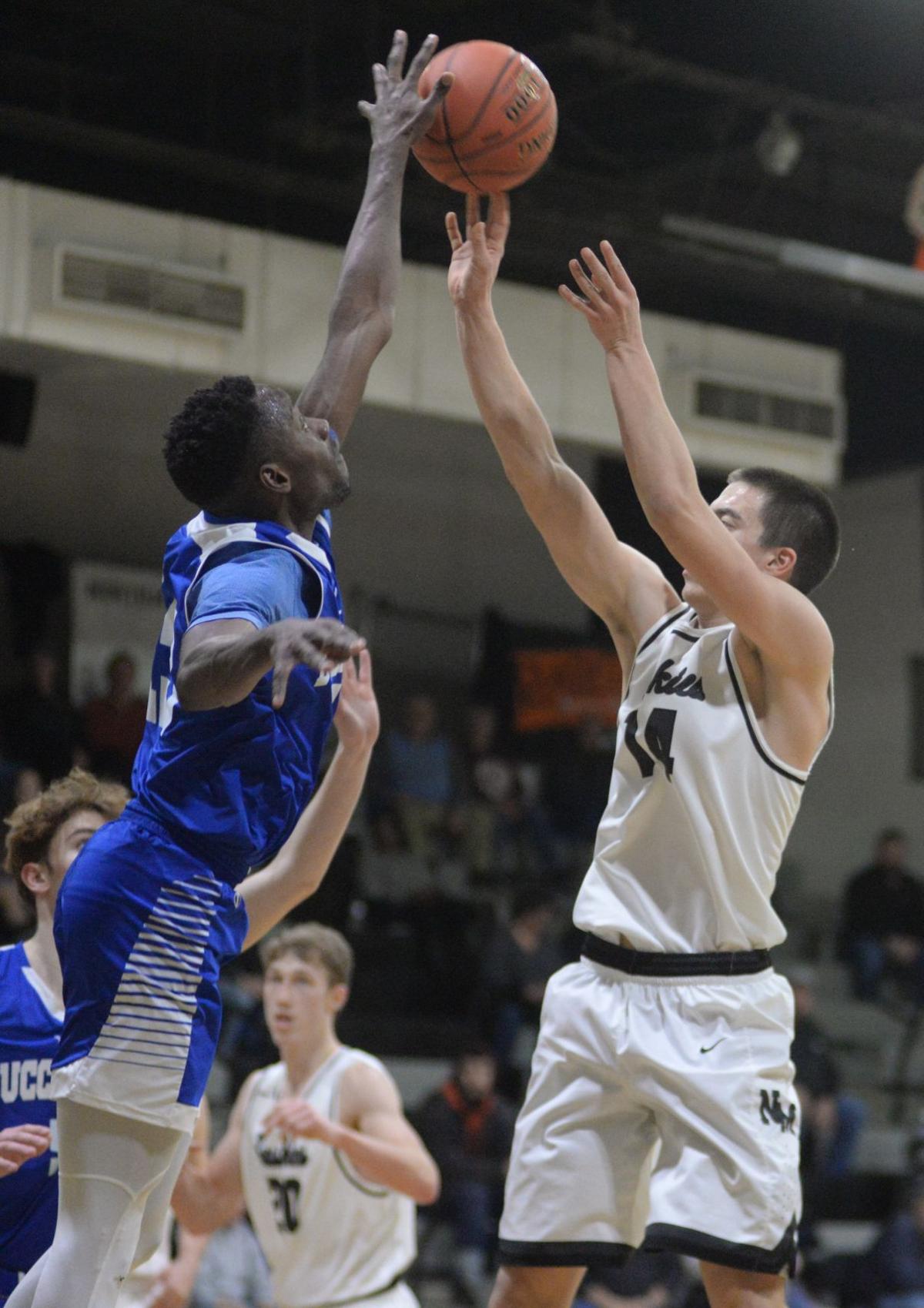 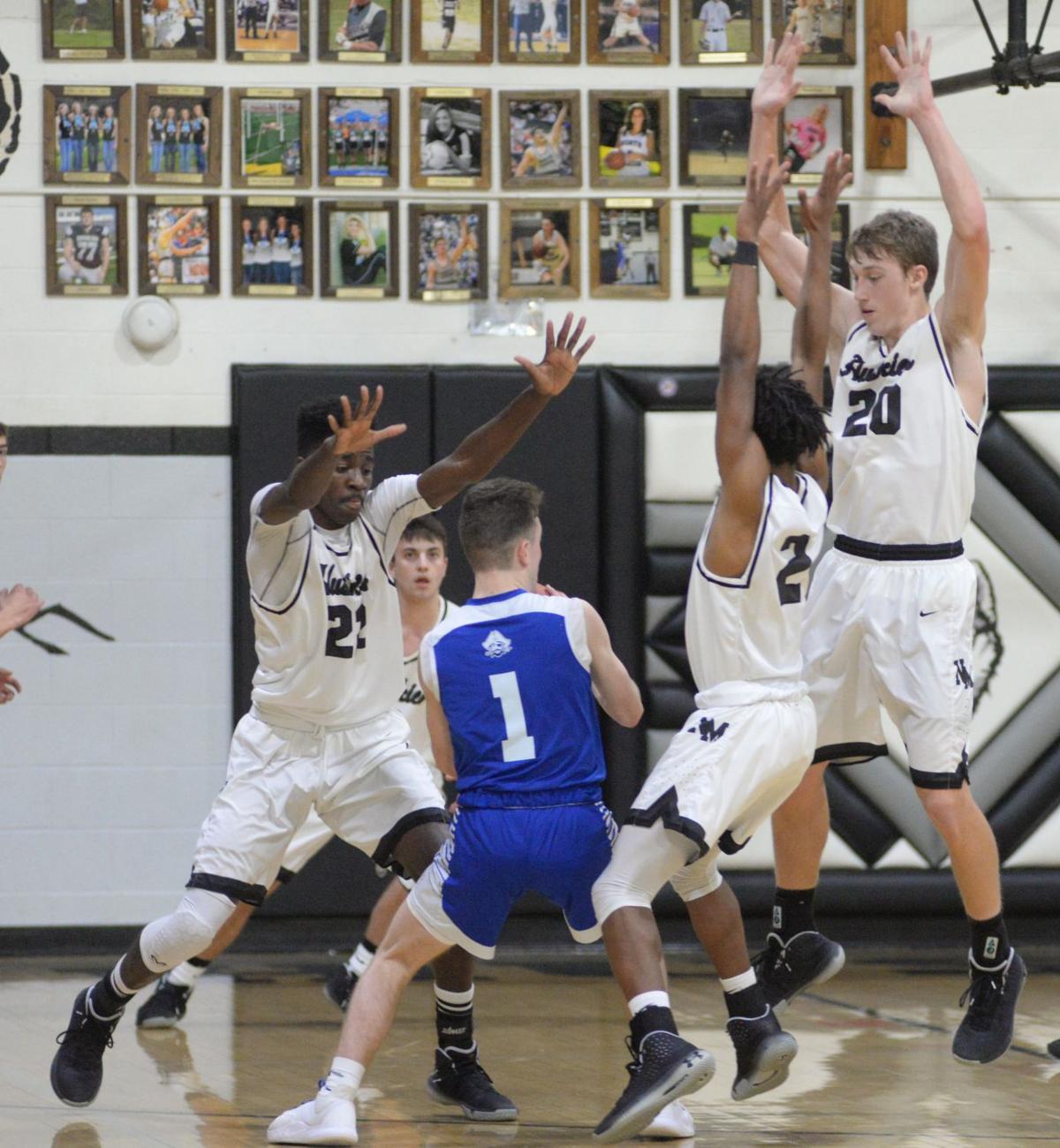 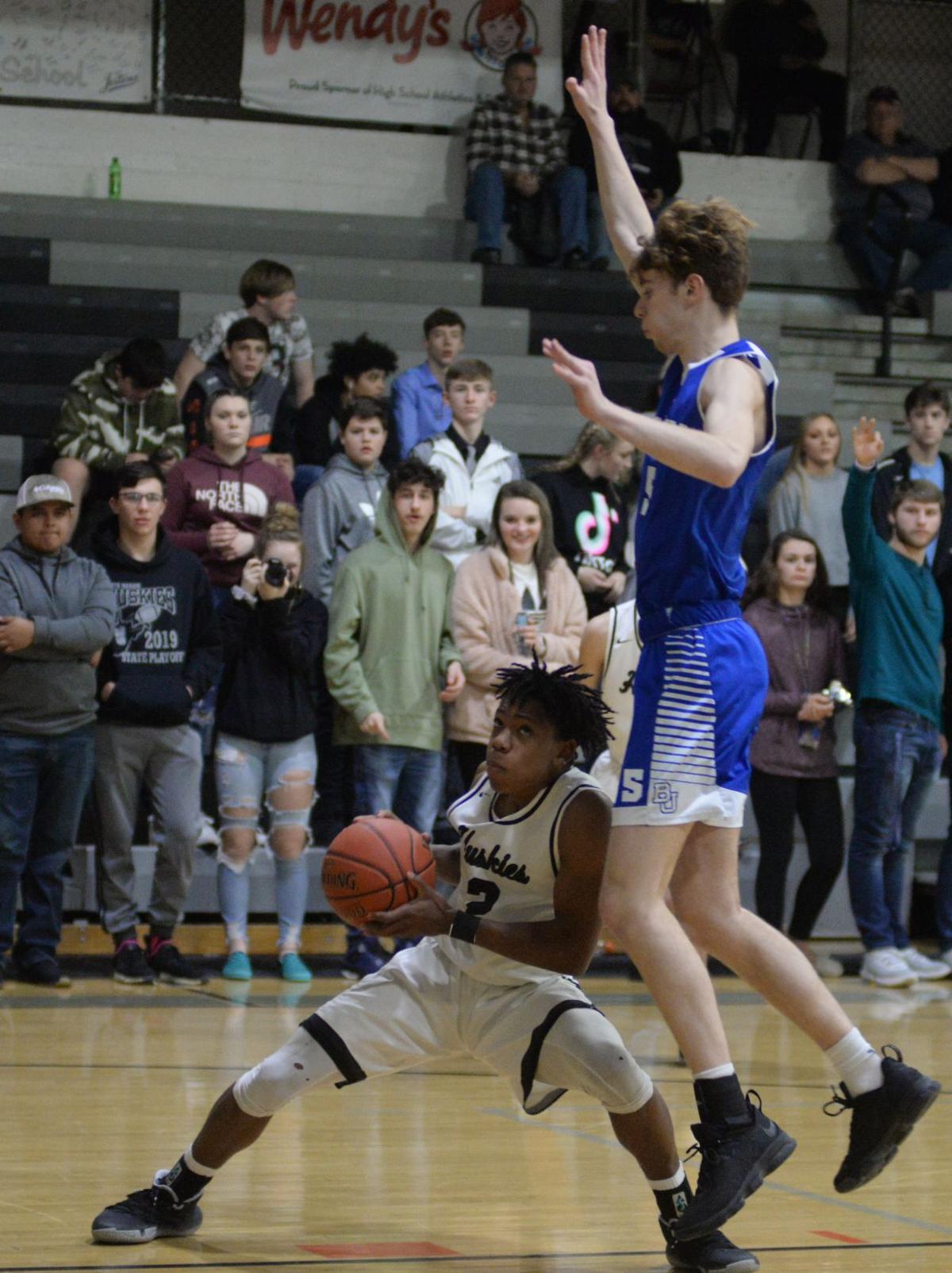 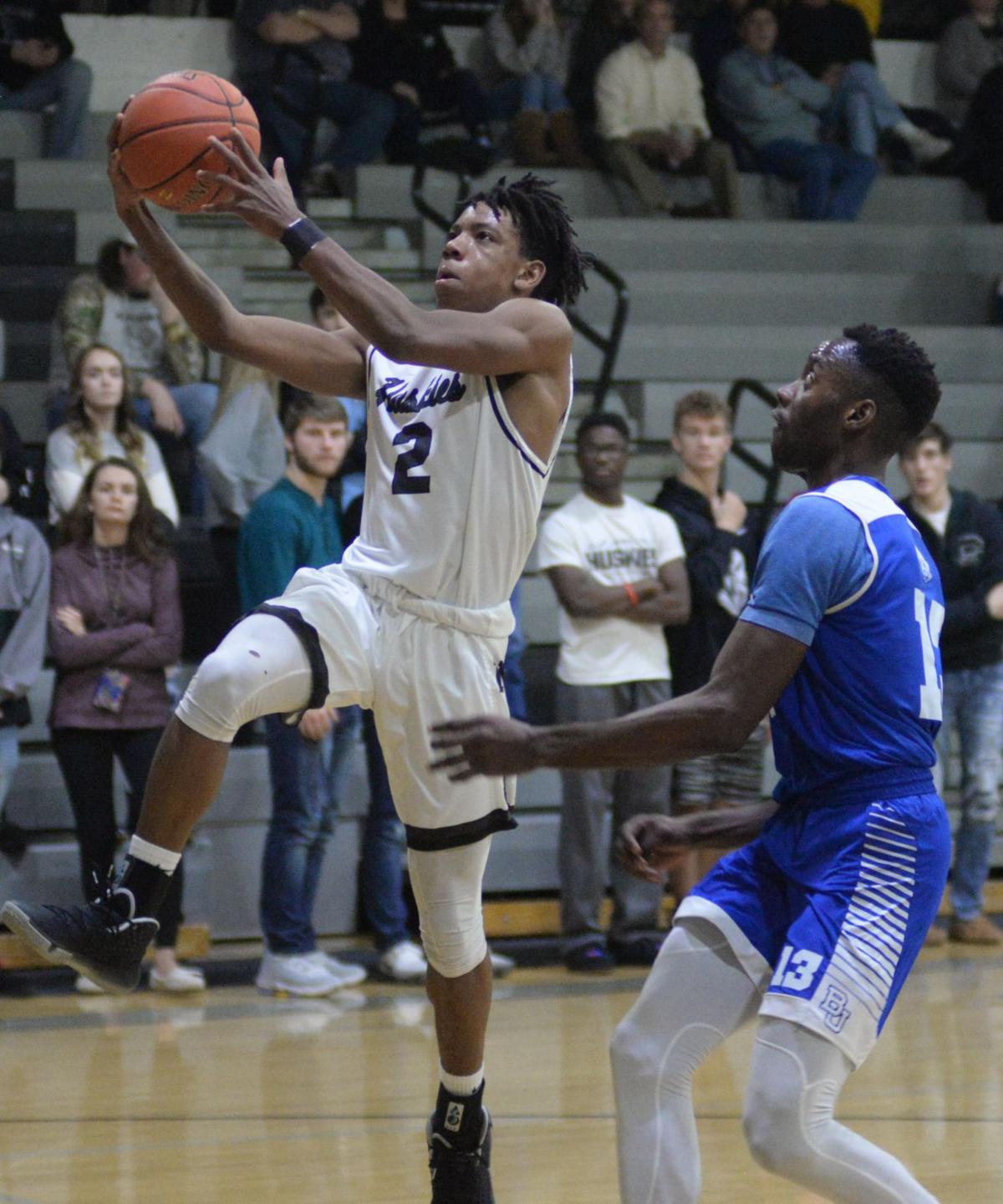 North Marion's Tariq Miller goes up for a layup against Buckhannon-Upshur's Lamer Hurst. 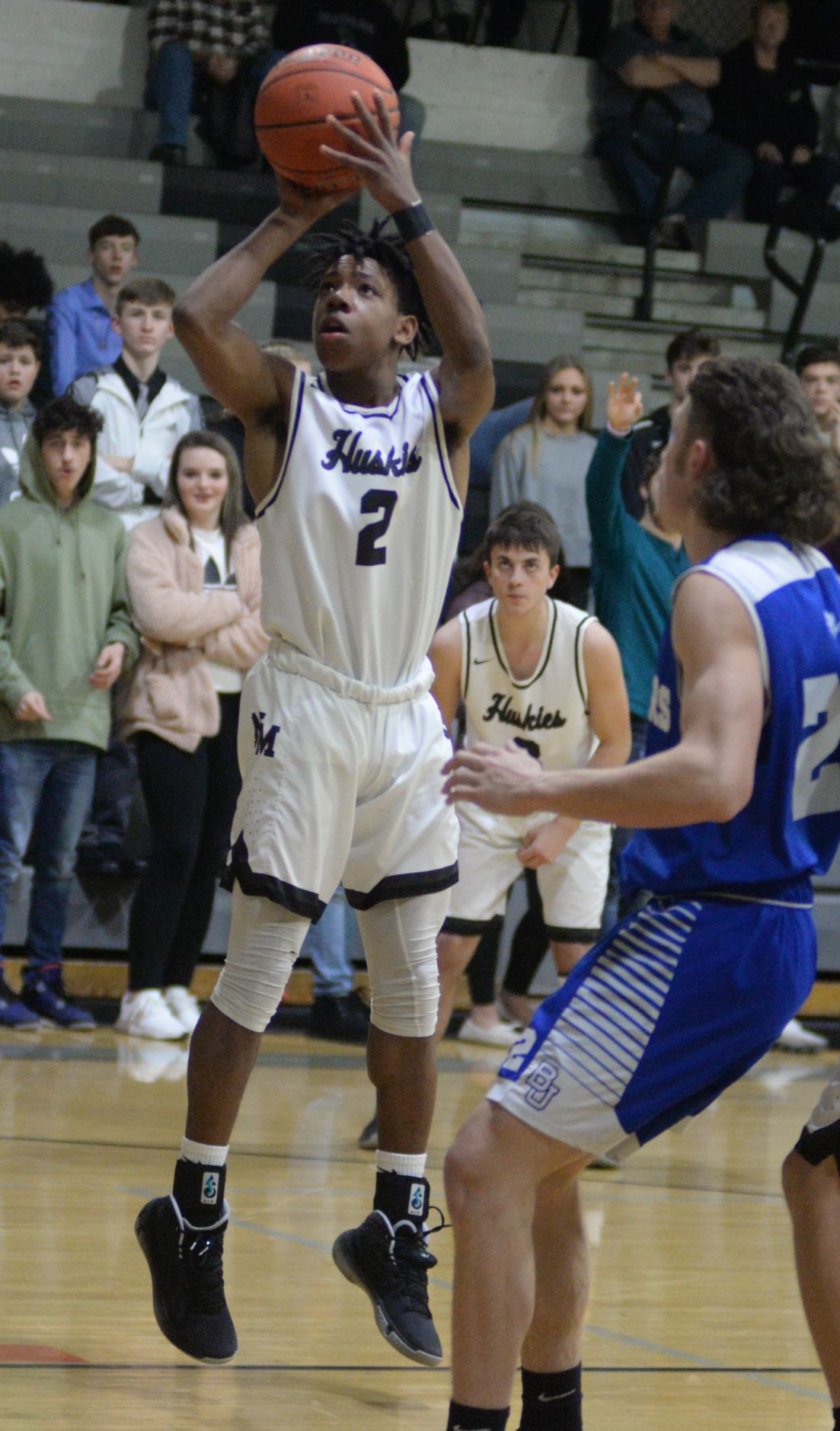 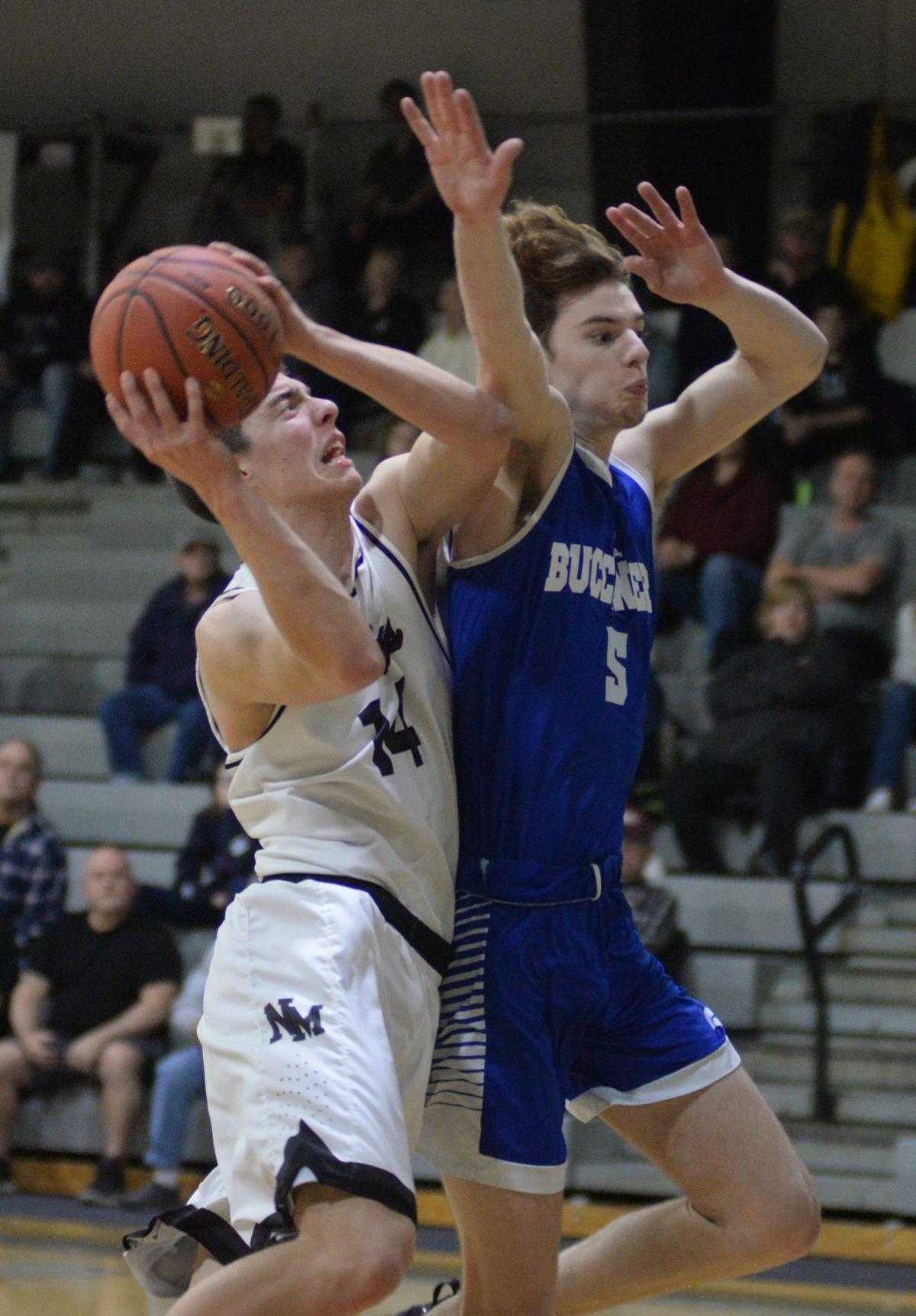 North Marion's Gunner Murphy is fouled by Buckhannon-Upshur's Will McCauley. 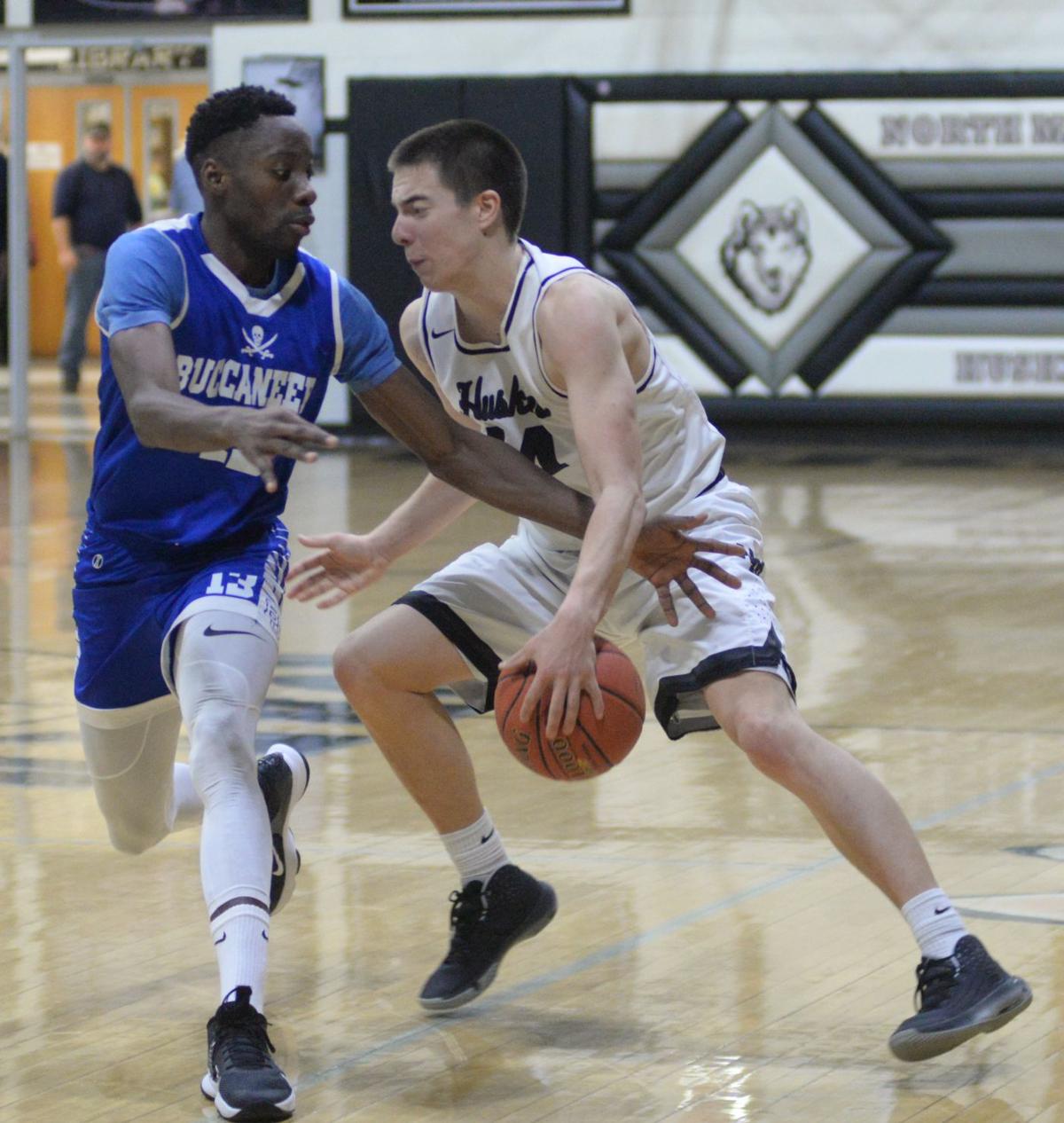 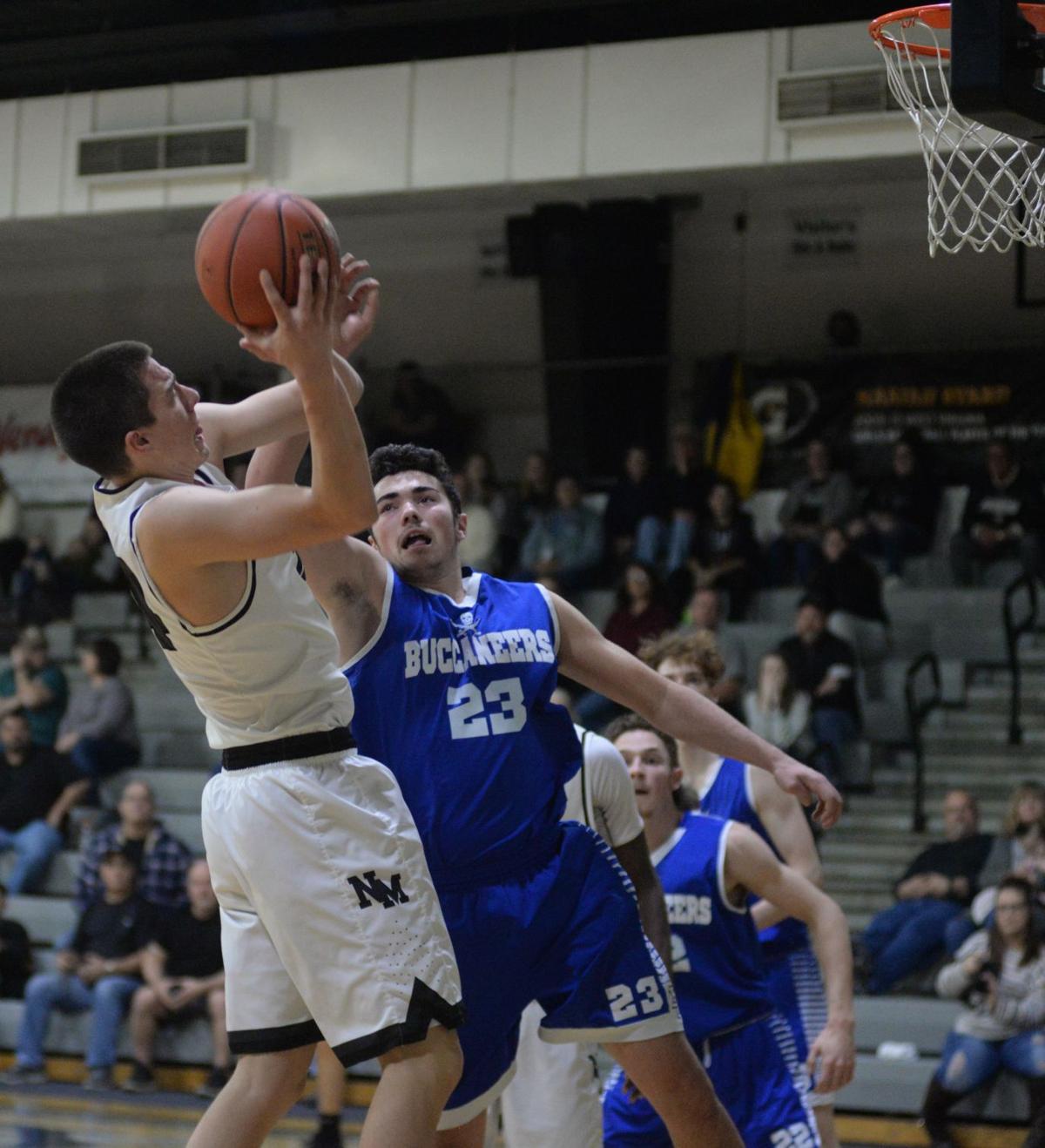 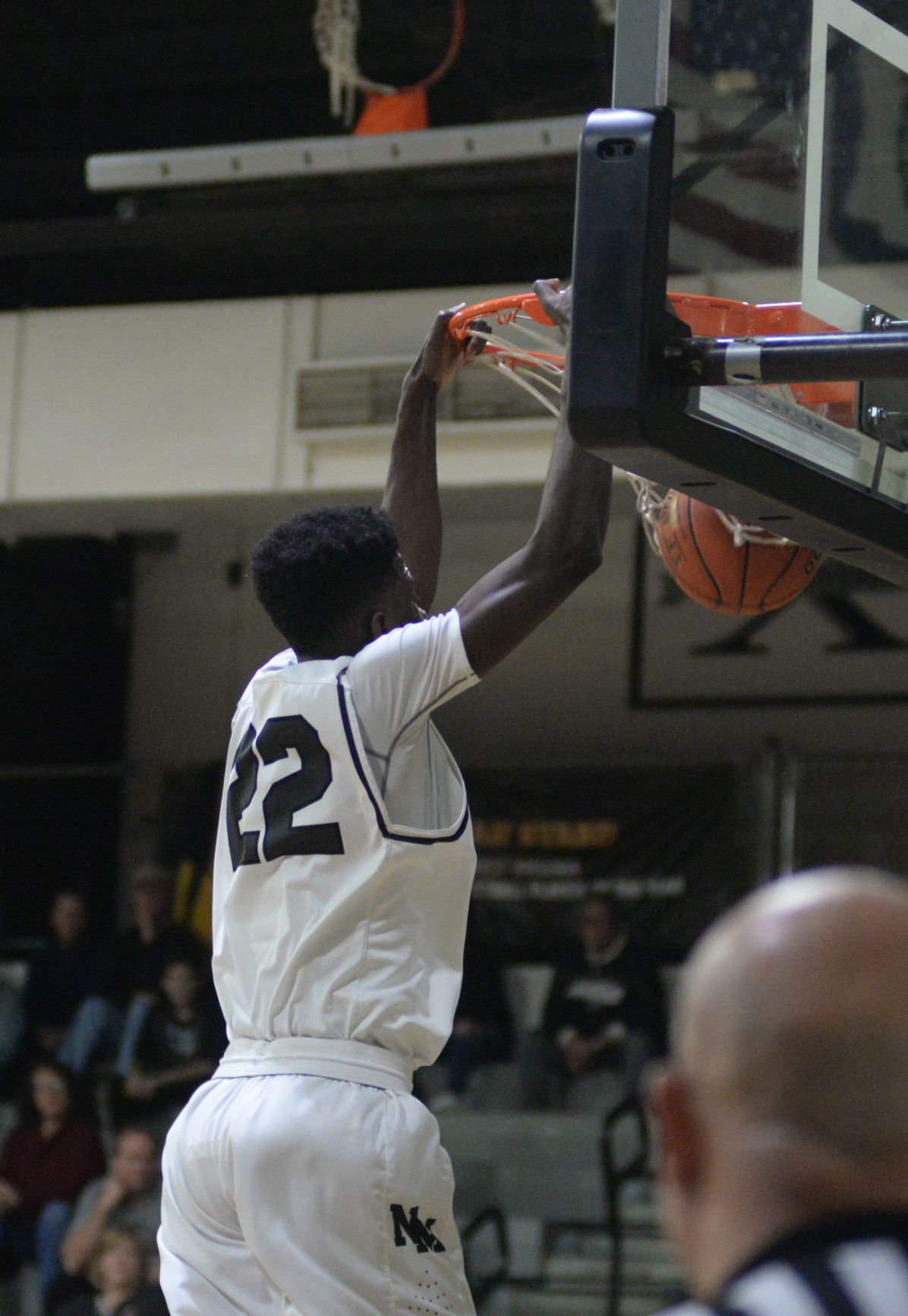 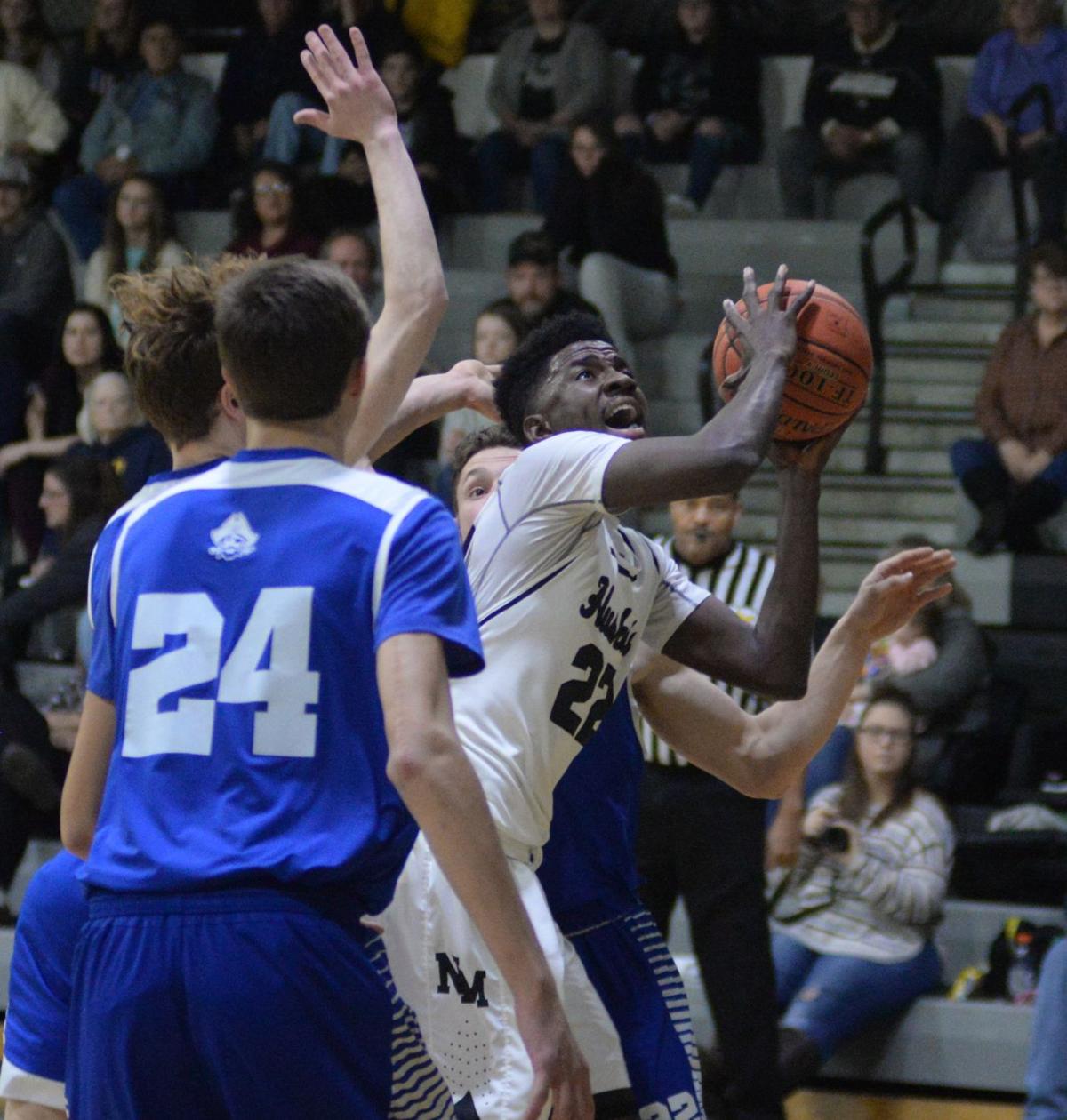 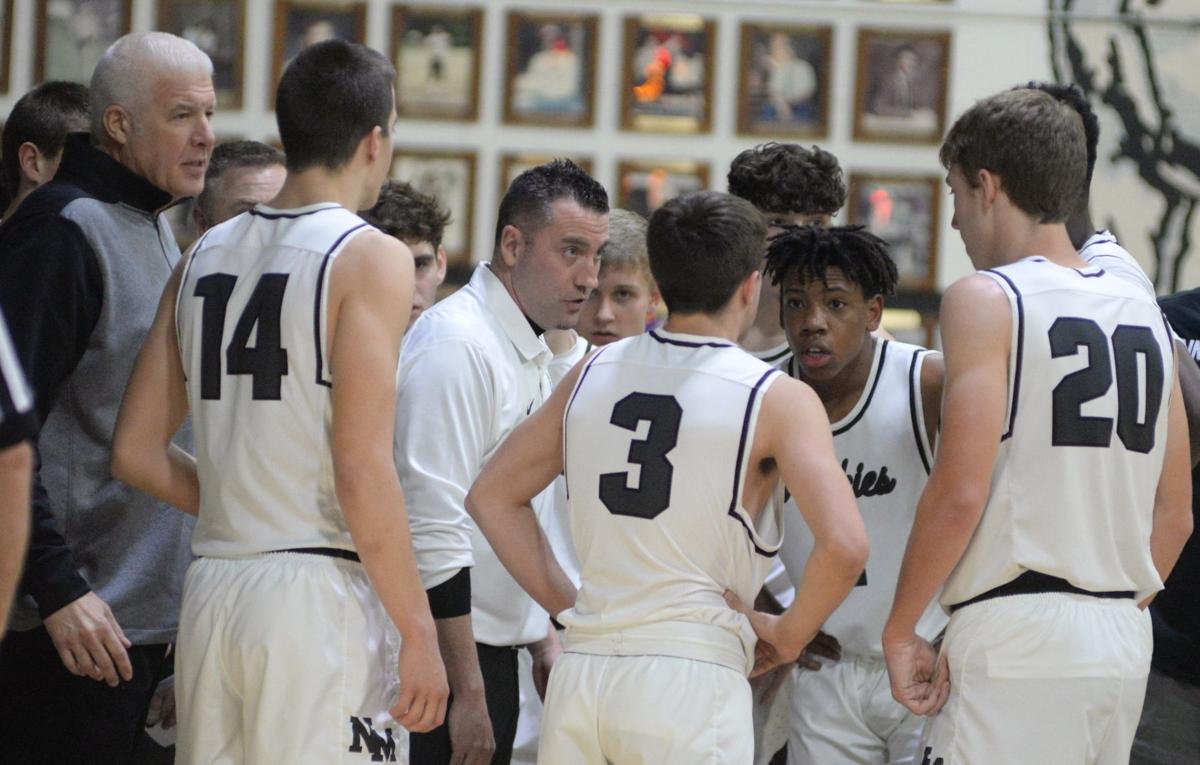 North Marion coach Chris Freeman talks to his team in the huddle. 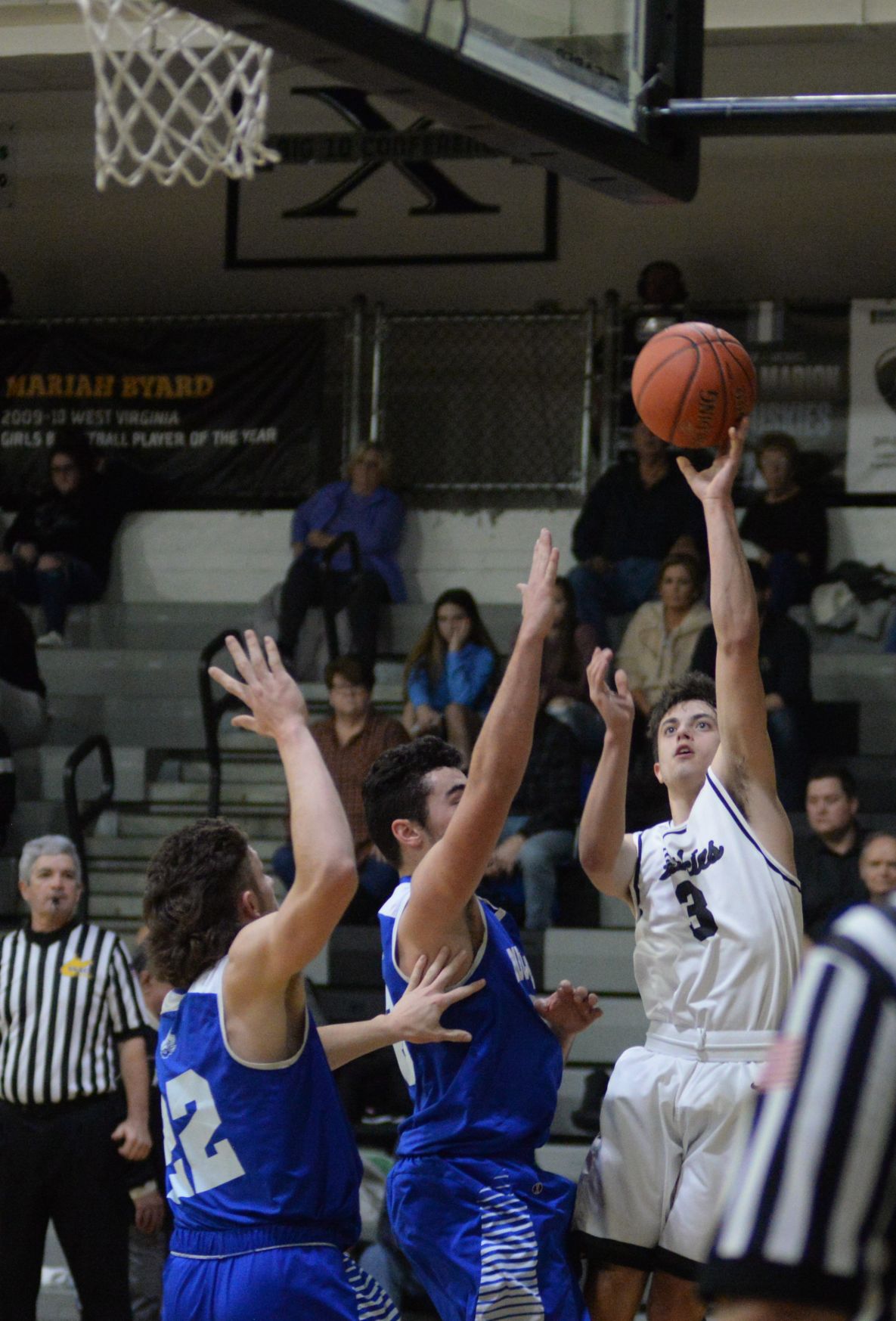 North Marion's Tariq Miller goes up for a layup against Buckhannon-Upshur's Lamer Hurst.

North Marion's Gunner Murphy is fouled by Buckhannon-Upshur's Will McCauley.

North Marion coach Chris Freeman talks to his team in the huddle.

RACHEL – For three-plus quarters undefeated North Marion High couldn’t shake a pesky Buckhannon-Upshur High squad that had the size, athletes and offensive punch to keep pace with the Huskies on Wednesday at North Marion High School.

But an NMHS team constructed on relentlessly scouring for mismatches and then prying at it until opponents break eventually bent the visiting Bucs to its will, going up by as many as 20 in the fourth quarter before nabbing a 68-57 victory.

Gunner Murphy once again poured in buckets throughout the evening, scoring a game-high 27 points for the Huskies to go with 10 rebounds. NMHS’s Praise Chukwudozie also achieved a double-double with 18 points on a perfect 7-of-7 shooting to go with 11 rebounds and four blocks. And Michael Garrett added another 14 points and seven rebounds, all of which were on the offensive glass.

Zach White scored a team-high 13 points off the bench for the Bucs, while Ryan Hurst added 10 points and dished out eight assists.

“I think with the mismatch Gunner had on the wing he could get to the rim – he got that kid in foul trouble. And then Praise I thought had a mismatch – (White) wasn’t as athletic as he was – and I thought he could take him off the bounce,” said North Marion coach Chris Freeman. “(BU’s) help side (defense) wasn’t real good, so we tried to isolate those two guys.

“They’re our go-to guys – they got to go in there and make plays and that’s what they did.”

Murphy, a bucket getter through and through, did most of his scoring in the first half, where he tallied 18 points on 6-of-11 shooting before tapering off with nine points on 3-of-12 shooting in the second half.

But Chukwudozie was there to take the scoring baton after a relatively quiet first half in which he scored just four points. He reeled off 14 points on 5-of-5 shooting after the break, including a stretch in the latter portion of the third quarter where he scored nine of 11 NMHS points that expanded the lead from 41-37 at the 4:01 mark to 52-41 by the end of the period.

“I just go through the flow of the game,” said Chukwudozie, who had 10 points in the third quarter. “If Gunner gets going I try to let him do his thing, but I noticed they were double teaming him and stuff, so I had to step up.”

During the Chukwudozie-led NMHS surge, which continued into the early stages of the fourth quarter, he dispensed the whole bag, crashing the glass for putbacks, attacking 1-on-1 off the bounce, driving downhill out of a pick-and-roll and even hitting a trail 3 from above the break. He also busted out the sauce with a Eurostep for a transition deuce and multiple elongated lateral strides to get to the foul line.

By the midway point of the fourth, NMHS has the game safely in hand up 60-41.

For the majority of the night, however, BU either traded dead even barbs with the Huskies or lingered in the 4-7-point deficit range. Their man defense made the Huskies work within their motion offense and Lamer Hurst, BU’s athletic swingman, could at least keep Murphy from breathing straight fire.

The Bucs’ offense, meanwhile, navigated the web of arms in North’s 2-2-1 full-court press and half-court 2-3 zone with baseline movement and penetration into the middle to summon just enough offense.

“We felt like with their size we may have had problems checking out, so we felt like the zone was the best thing. Then we’ve never seen them make that many 3s and we were really worried about the Hurst kid who had 29 the other night against Lewis County,” Freeman said. “But then they step out and hit some 3s, which is part of it, but I thought we adjusted well.”

The zone pretty much held Hurst under wraps as a scorer, forcing him off the 3-point arc and into the midrange area where he tried to loft rainbow floaters over the lengthy contests of Chukwudozie and Garrett. He finished the game just 4-of-13 shooting, but a series of finds along the baseline after collapsing the zone as well as kickouts to shooters breathed life into the Bucs yet.

The two teams were tied at 14-14 after the first quarter following a well-executed sideline out of bounds play by the Huskies that got Chukwudozie a lob dunk just before the horn. Murphy wedged North Marion in front in the second with a face-up triple after grabbing an offensive rebound and then another deadeye pull-up from deep above the break.

After a drive-and-kick assist from senior guard Ethan Darden to fellow senior Logan Baker for a 3 and a twisting hang jumper by Murphy, North led 31-26 at the half.

BU ticked off six points in the opening 1:15 of the third with back-to-back assists by Hurst and a four-point possession by White when he putback his own free throw miss after converting an and-one. A wide open catch-and-shoot 3 by Murphy off a driving assist by Tariq Miller and a skip pass find from Chukwudozie to Miller for a layup pushed the margin back to seven, but a Bucs spurt got them within 41-37.

But with Garrett as a second banana via timely putback and a few post-up duck-ins, Chukwudozie broke out his full palette to separate the Huskies for good to move North to 7-0 heading into Friday’s rematch with East Fairmont.