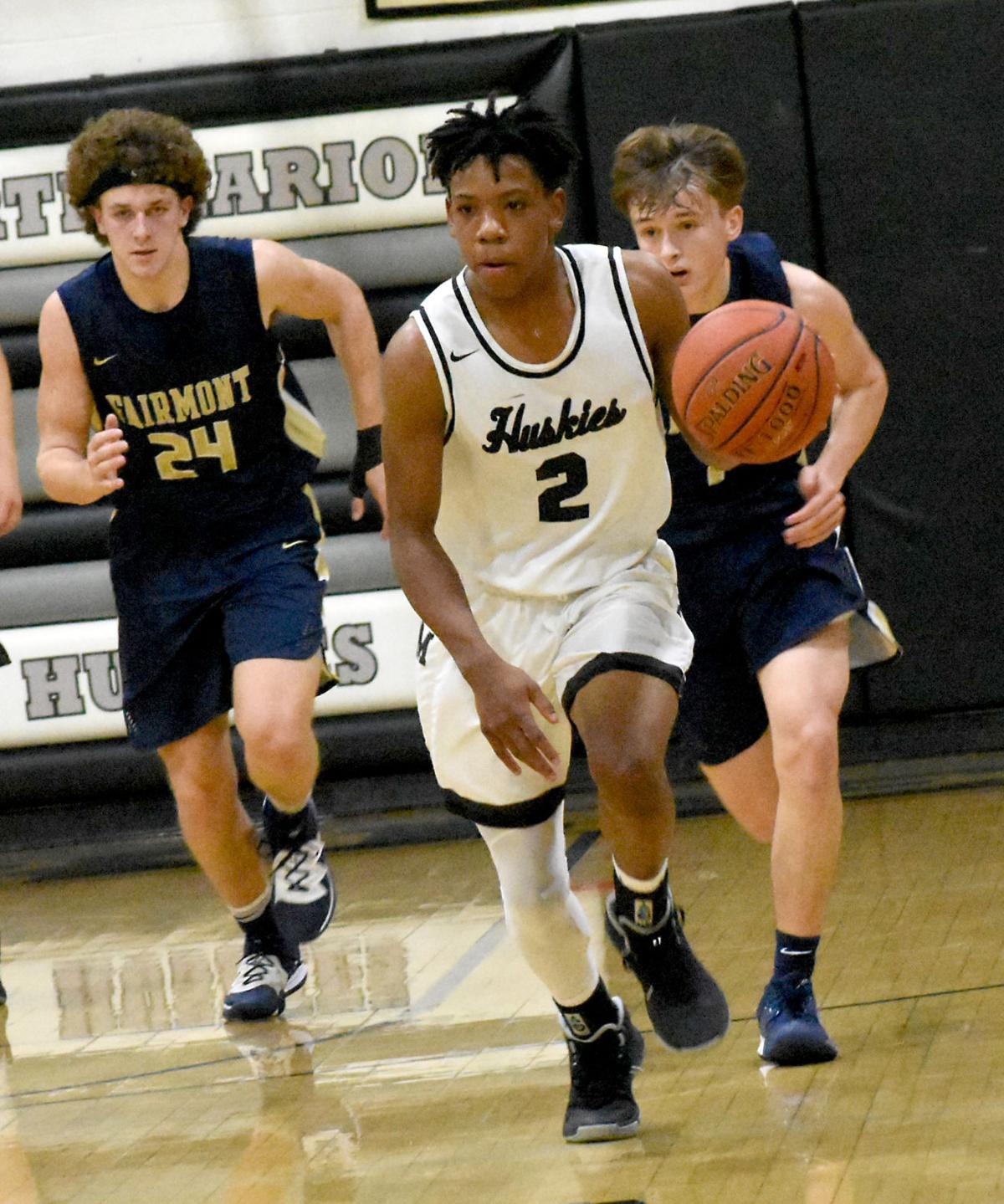 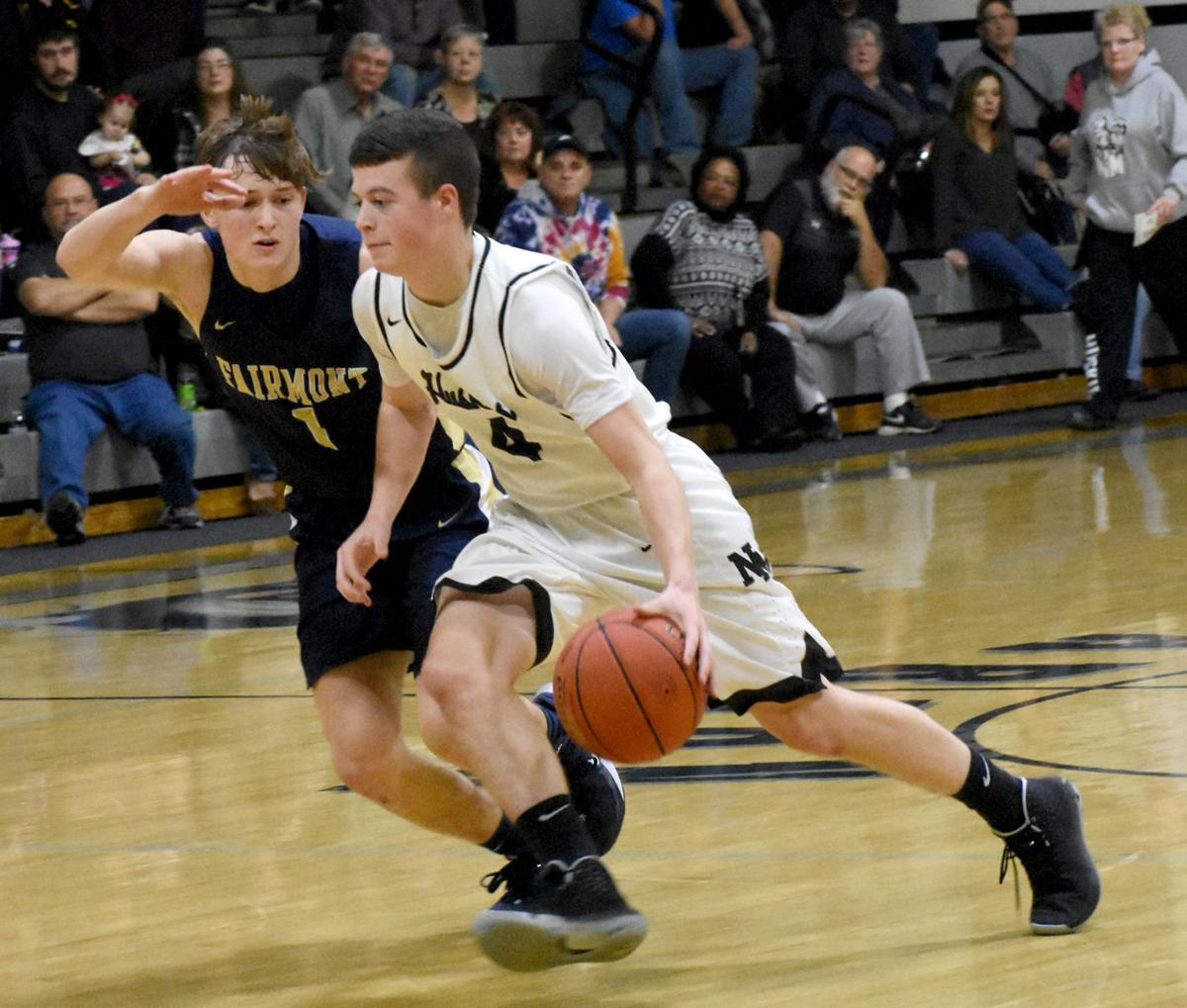 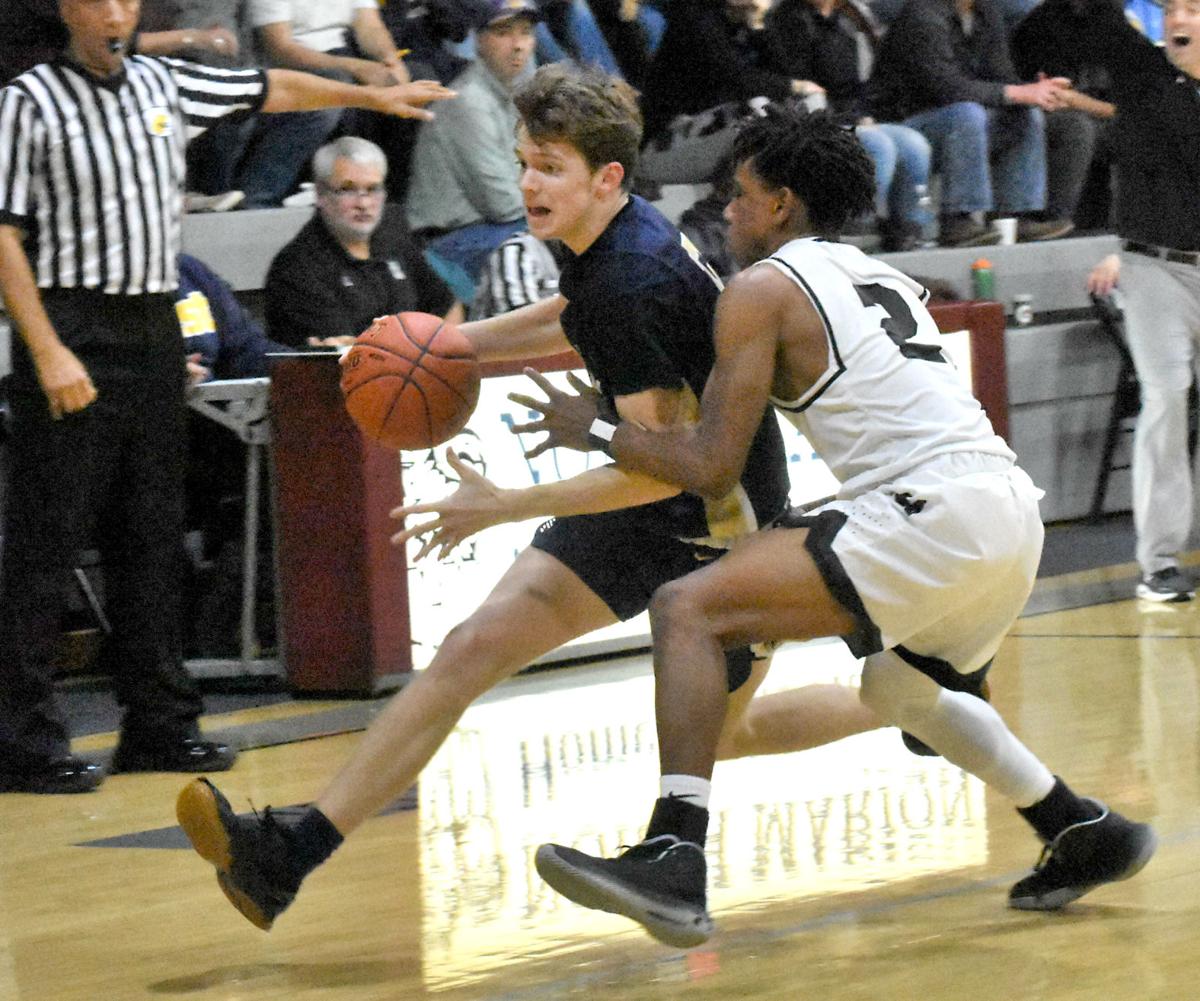 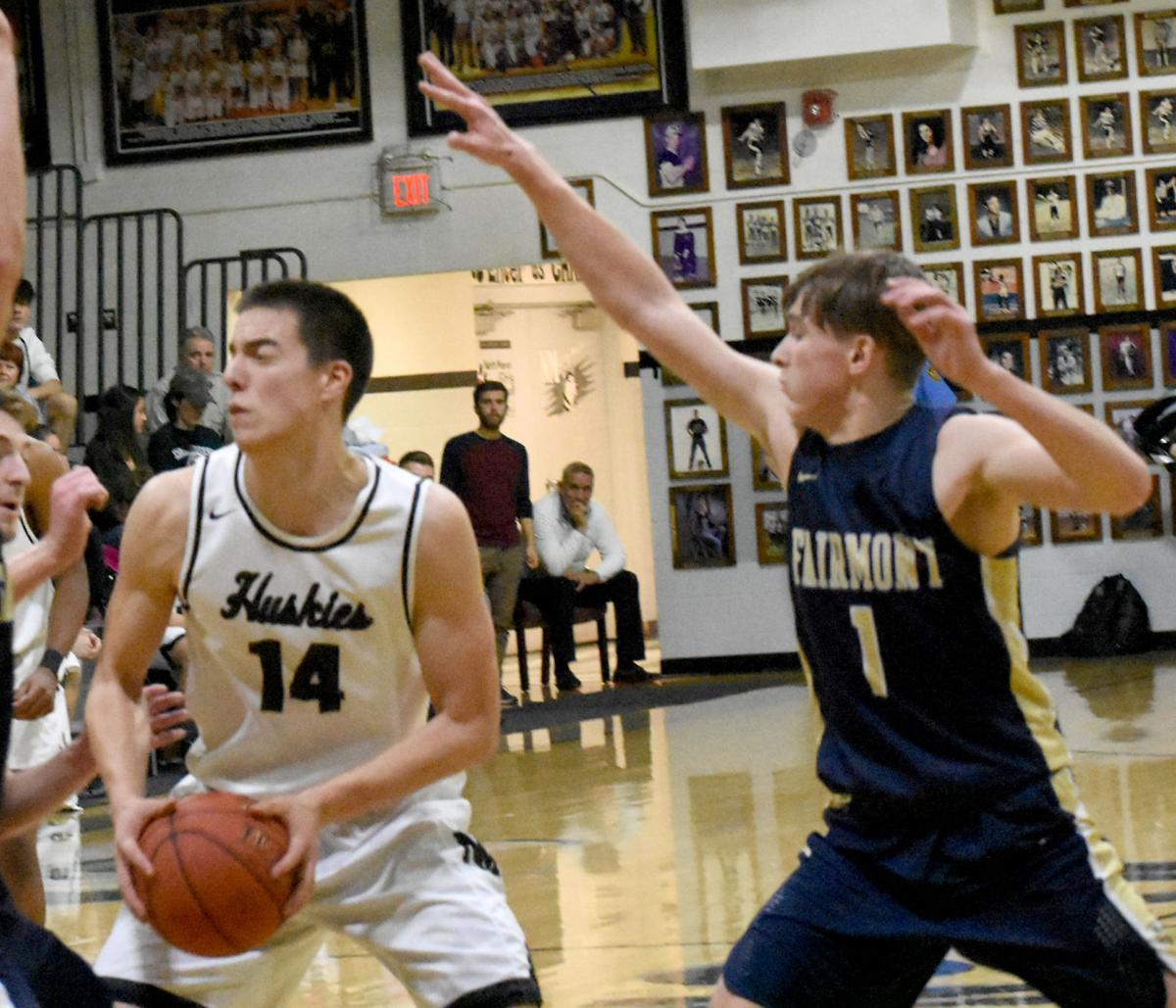 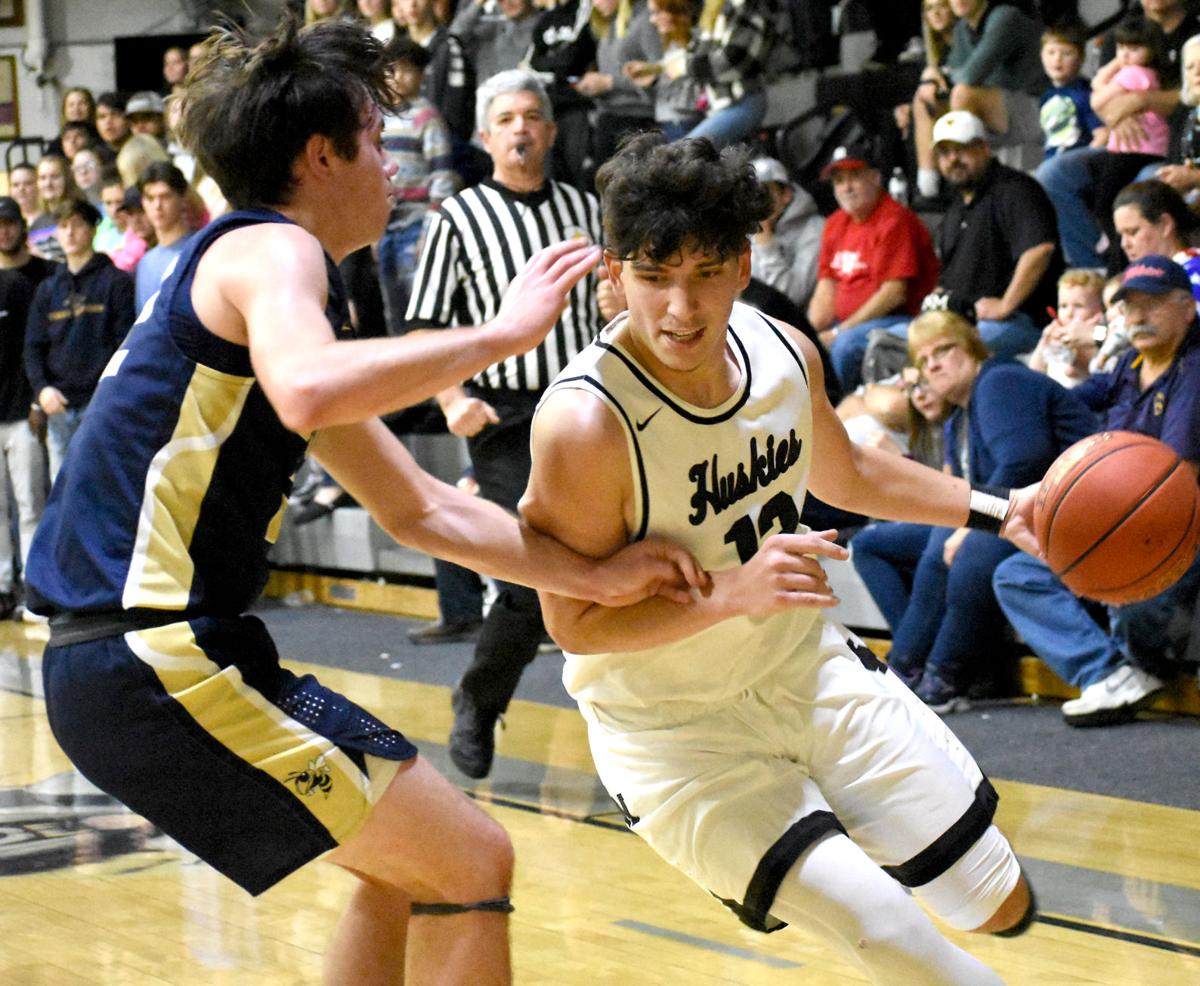 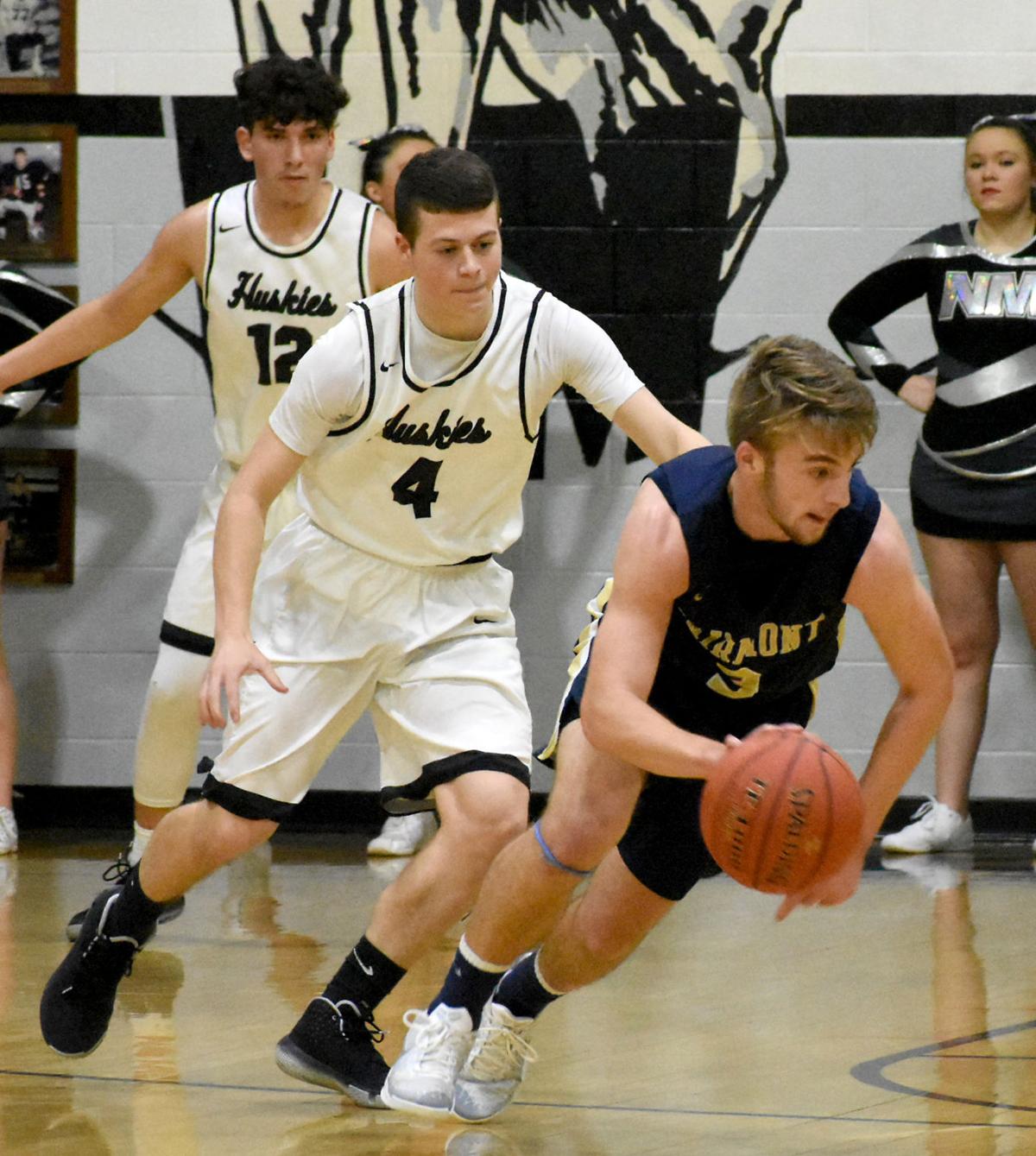 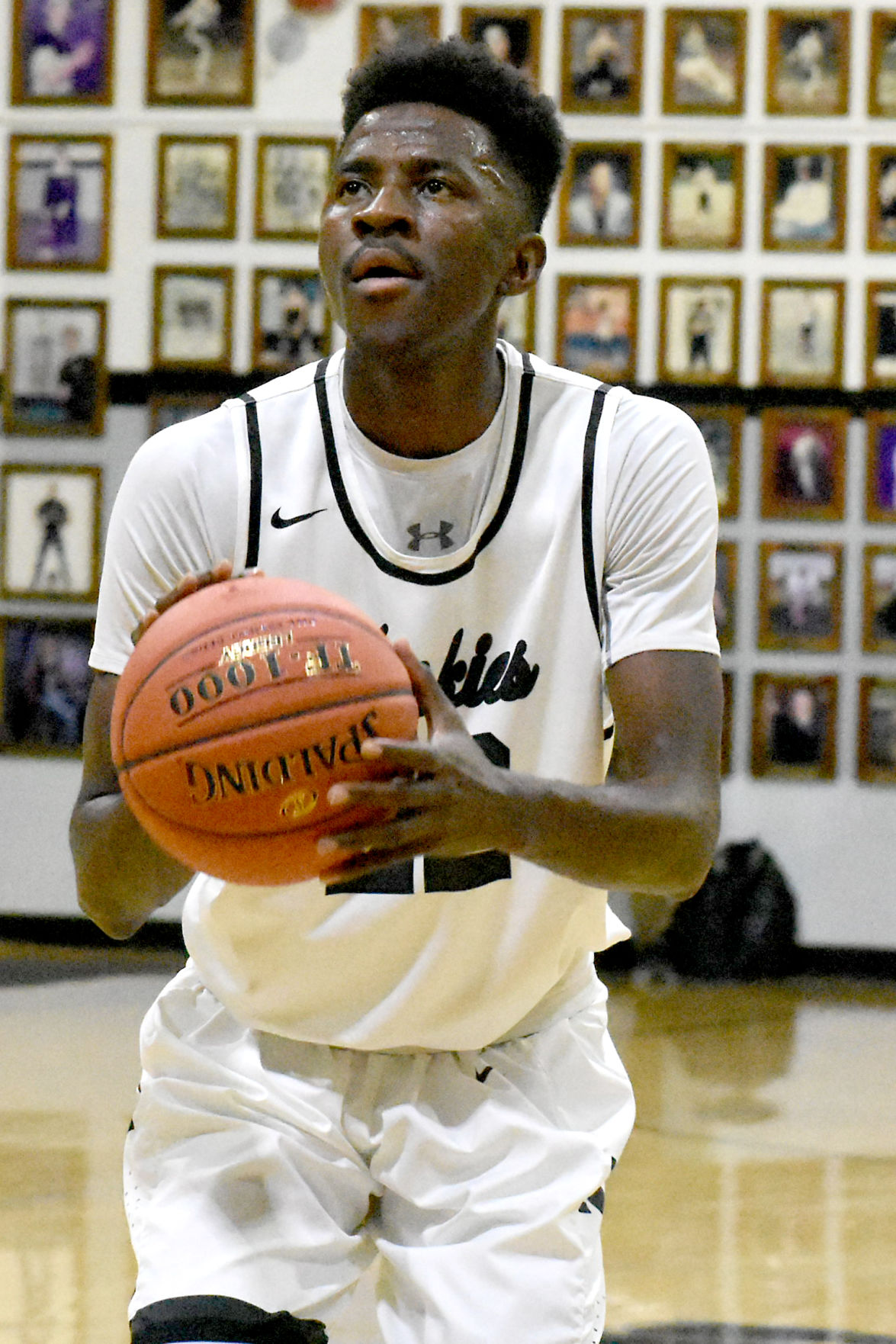 RACHEL — A pair of well-acquainted county rivals who have played a seemingly never-ending series of back-and-forth thrillers through the years, North Marion and East Fairmont battled to yet another dead-even standstill on Friday night in Rachel that wasn’t decided until the final moments.

In a game that featured 10 ties and seven lead changes, East Fairmont prepared to inbound the ball down one with 16 seconds left, somehow with a chance for a game-winner after trailing by six points just five seconds earlier. The Bees ran a bit of clock and eventually coaxed North Marion into a foul that put EFHS in the bonus and Aaron Gorman at the foul line for a 1-and-1 in a 48-47 game.

Gorman’s free throw caromed off the rim short, but in a wild scramble, East’s Ethan Harvey tracked down the miss and passed to Gorman out of a crowd for a deep look at a game-winning 3. Gorman’s shot glanced off the side of the rim triggering an all-out chase for the rebound between North Marion’s Cruz Tobin and East Fairmont’s Aiden Slusser. The pursuit carried out of bounds and into the gymnasium’s far corner before the mini scuffle was obscured by both cleared benches, cheerleaders and various fans who tried to get a peak at the action.

No further altercation was deemed to have happened and no technical fouls were assessed, allowing the Huskies to escape with a 48-47 victory to keep their undefeated season in tact at 8-0. The Bees dropped to 3-5 with the loss.

“It’s a county rivalry game. It was what it was supposed to be,” North Marion coach Chris Freeman said. “I thought our guys, once again, did what they needed to just enough to finish it out down the stretch.

“But East side played a heck of a game.”

“We wanted to come back and play awful hard because the opening game of the year we didn’t think we did that,” said East Fairmont coach Tyrone Asterino, whose Bees lost to North 68-49 in that game at the Hive on Dec. 14. “I’m super proud of my guys — they battled and played hard. I can’t say enough about our effort.

Star senior guard Gunner Murphy led the way for the Huskies with 21 points and eight rebounds, but a pesky East Fairmont 2-3 zone and gritty overall defensive effort made it an exhausting night for Murphy and the Huskies, who were playing their third game in five days. He finished the night 7-of-19 shooting, including just 2-for-8 in the first half, but when North Marion needed a stone-cold bucket, he was there to deliver.

With the Bees down one at 43-42 and just over two minutes to play, Freeman drew up a play out of a timeout to get Murphy loose for a 3 off a flare screen versus East’s zone. Murphy zipped off the screen moving toward the left sideline and caught the ball almost 10 feet behind the line.

He hoisted anyway...and cashed it.

Murphy’s triple put NMHS up 46-42 with a tick over two minutes left, and after playing man-to-man for the majority of the night, Freeman toggled to a 2-3 zone down the stretch to hold the Bees to just five points in the first 7:30 of the fourth quarter. The zone, along with a handful of big-time defensive plays from NMHS senior forward Michael Garrett, who had four blocks in the second half, maintained North’s lead which reached 48-42 with 30 seconds to play after a pair of free throws.

In desperate need of a bucket, the Bees clanked a jumper, but Trey Rogers, the heartbeat of the Bees all night, hustled to tear away the offensive rebound before kicking back to Gorman who buried a 3. A technical on North Marion’s Tariq Miller immediately after the shot then gave Rogers a pair of free throws — which he converted — and East Fairmont the ball for the potential go-ahead possession.

North, however, hung on after the frenetic ending to swipe a game that for so much of the night was up for grabs, swinging back and forth like a pendulum.

“He’s got to keep his head and let the coaches get on the officials to get the calls,” Freeman said of Miller’s tech, “but like I told him, he also played a heck of a basketball game.”

Miller complemented Murphy’s 21 points with a fine all-around outing as he scored 12 points on 5-of-9 shooting to go with four rebounds, four assists and four steals. Miller and Murphy were the lone Huskies to reach double figures.

Garrett was NMHS’s bulwark defensively as really the team’s lone true big for long stretches with Praise Chukwudozie encumbered by foul trouble. His rim protection was paramount, and he also made several heady rotations in the second half to seal off East’s army of back cuts and closeout attacks. Tobin, meanwhile, snatched a team-high eight rebounds for NMHS.

Rogers scored a team-high 15 points for the Bees to go with nine rebounds and four assists, unfurling a customary peak Rogers game — relentless pursuit on the boards, closeout-attacking chops, savvy cutting, and a couple of sly drop-off assists. Harvey tallied another 11 points, three rebounds and two assists for the Bees.

“Again I think our effort and execution defensively was pretty damn good,” Asterino said. “(North) has some athletes and you have to know who their shooters are and what they’re trying to do. You got to contest shots, box out, rebound — we did those things and that was impressive.”

East’s 2-3 zone evaporated any Garrett post-ups, shut off Chukwudozie’s attacking lanes and even had Murphy grinding for every bucket.

“He was tired. It was a long week,” Freeman said of Murphy, who like Garrett, played practically every minute of Monday’s game against Fairmont Senior and then Wednesday’s game against Buckhannon. “But I hand it off to him — he battled through it. He understood he had to try to get to the rim a little bit and make some different shots in the midrange.”

With Murphy under wraps, North Marion started the game just 3-of-12 shooting and were 4-of-14 in the opening quarter. East was a similar 4-of-11 from the field, but squeezed out a narrow 12-11 lead after one.

The Bees and Huskies swapped the lead four times in the second quarter, with a wing 3 by North’s Ethan Garden and an and-one underhand finish By Gorman acting as notable plays to swing the lead. The Bees ultimately kept their one-point lead at the half.

“I didn’t think our defense was very good in the first half — they were really driving the ball on us to get to the rim and we were lazy reaching in for cheap fouls,” Freeman said. “But like I said we were probably a little tired, a little exhausted.”

The Huskies re-took the lead at 30-29 on an and-one fastbreak layup by Miller that was kickstarted by a pair of Garrett blocks and they didn’t relinquish it the rest of the way, riding a series of nifty Murphy midrangers set up by jump-stop and shoulder checks as well as a few timely hoops by Miller to keep just ahead of the Bees.

North never separated by more than three points in the second half until Murphy’s late 3 and it ended up even squandering that lead in a jiffy. But when they finally needed a stop, they got one.

“We asked them, ‘Can guys dig in this last possession, man them up and get it done?’ and they said, ‘Yes,’” Freeman said of his players. “Hats off to them.”