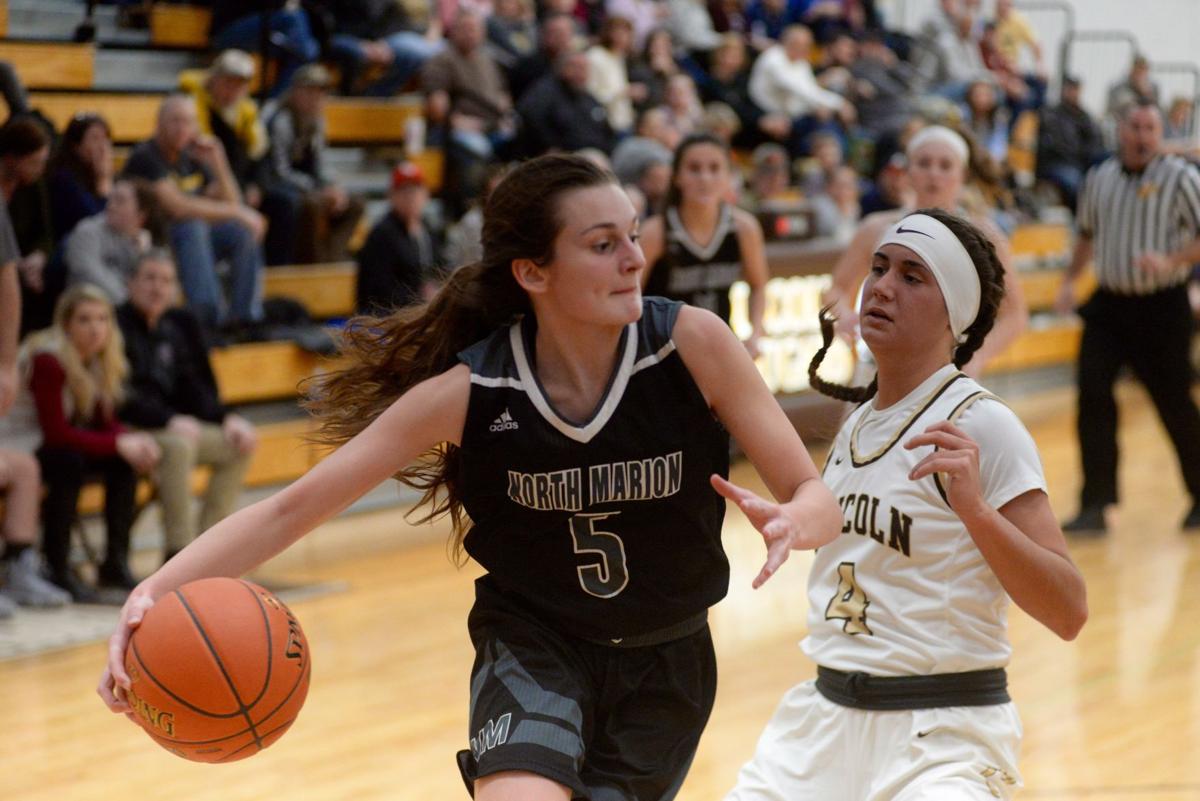 North Marion senior Taylor Buonamici drives to the rim against Lincoln in a 68-65 victory on Jan. 28. 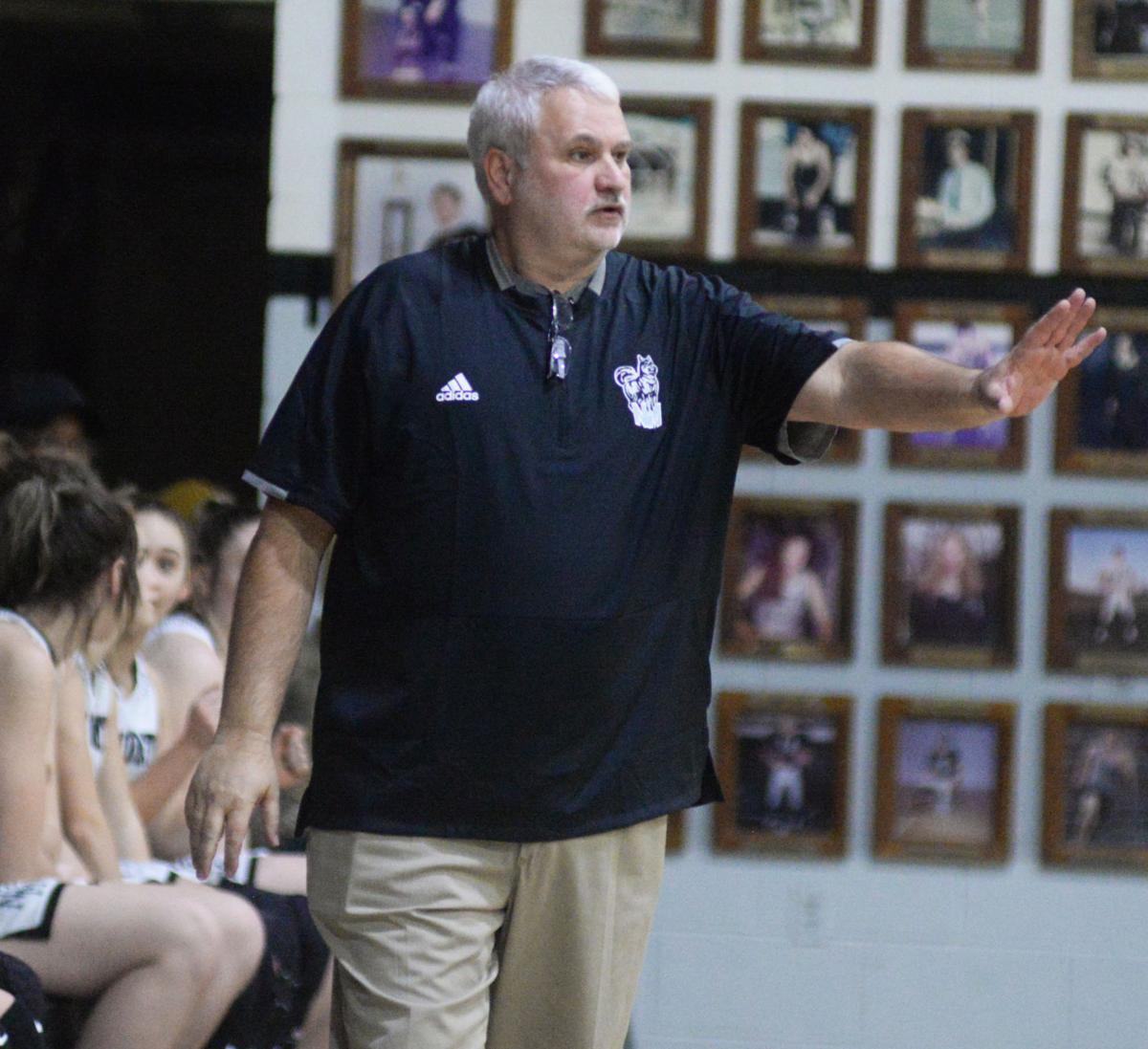 North Marion senior Taylor Buonamici drives to the rim against Lincoln in a 68-65 victory on Jan. 28.

FAIRMONT – Right up until the WVSSAC Girls’ Basketball State Tournament was suspended indefinitely just a little over two weeks ago, North Marion High showed it had all the ingredients and team-wide traits to potentially end yet another dominant regular season with the program’s fifth state title.

The Lady Huskies had one of the program’s all-time players in senior guard Taylor Buonamici leading the way, had a group of four first-year starters around her who had proven their mettle, and a legendary coach in Mike Parrish at the helm. North Marion ripped off a 21-1 regular season, claimed sectional and regional titles, and advanced to the Class AA state semifinals as the top seed before the season was suspended indefinitely.

The collective merits of the Huskies were fully recognized by the Big 10 Conference when it announced its season awards on Tuesday, as North Marion placed a league-high three players on the All-Big 10 first team. Buonamici and Parrish took home the major awards of Big 10 Player of the Year and Big 10 Coach of the Year, respectively.

Buonamici’s Big 10 Player of the Year award and first-team spot adds to what has been a top-tier career with the Huskies. She’s now a three-time all-conference selection, a two-time all-state selection, with a third on the horizon, and the 2018 Class AA state championship game MVP where she scored 33 points and made a state tournament record 21 free throws. Buonamici, who is North’s fourth all-time leading scorer, recorded averages of 17.9 points, 5.8 rebounds, 4.4 assists and 2.8 steals a game this season.

“She’s a great kid, a great person, a great student and a great basketball player,” Parrish said about Buonamici. “She’s just one of those kids who wants to win and has the desire to do what it takes. That’s the type of player we’ve had over the years – kids who want to win and put the team first. She’s done a lot for the program over the last four years.”

Denham, a junior, and Carson, a sophomore, each etched quality seasons as well for North Marion in their first year as starters. Denham, a speedy ball handler with two-way dynamism, averaged 12 points, 4.4 rebounds, 3.8 assists and 3.2 steals a game this season, while also burying a team-high 50 3-pointers. Carson, who was the Huskies’ defensive anchor at the 5-position, nearly posted a double-double for the season with averages of 11.0 points and 9.0 rebounds to go with 5.5 blocks and 1.9 steals a game.

Parrish, meanwhile, led the Huskies to a 25-1 overall record this season, including an undefeated 12-0 mark in conference play, to earn Big 10 Coach of the Year honors after North Marion won its 10th Big 10 championship during his 16 seasons as head coach. Parrish, who surpassed 300 career wins this season, now owns a career record of 310-105 (.747), with 10 conference championships, 11 state tournament appearances and four state titles during his North Marion tenure.

Fairmont Senior’s lone first-team representative in Washenitz was a two-way dynamo all season long for the Polar Bears, already proving herself to be one of the state’s top talents as a sophomore. She ripped off an eye-popping line of 24 points and 10 rebounds a game, while also dishing six-plus assists and snagging six-plus steals a night as she led the Lady Polar Bears to a 20-6 overall record and a state tournament appearance.

Jenkins, meanwhile, as the Lady Polar Bears’ second-team representative, averaged double-digit scoring and over five rebounds a game to go with about three assists and three steals a game.

“It’s very impressive that those three young ladies make second-team Big 10 and it speaks volumes about the seasons they had,” East Fairmont coach James Beckman said. “They put in the work in the offseason and during the season, they continued to grind.”

Tennant rounded out her career at East in fine fashion as the team’s senior leader and point guard. She started all 23 games and posted averages of 3.9 points, 3.3 rebounds, 2.8 assists and 2.6 steals.

“Every team needs a Mackenzie Tennant,” Beckman said. “What she doesn’t have in size, she makes up for with her heart. And, man, she’s got a heart of gold.”

Bartholow, meanwhile, led EFHS in scoring at 10.8 points a game and canned a team-high 63 3-pointers, while Stover nearly averaged a double-double at 9.9 points and 8.1 rebounds a game.

“Kierra, when she leaves here next year, she’s going to be the top shooter in East Fairmont High School history. What a sharpshooter she is, but she’s also gotten better defensively and has become more of a two-way player,” Beckman said. “And Somer, she continued to do what Somer does – she clocks in and clocks out every day and in three years I have not heard one complaint from her.”

The All-Big 10 teams and awards are selected by conference coaches.

Raymond V. Prozzillo, 85, of Fairmont, passed away on Friday, July 3rd at John Manchin Sr. Assisted Living Facility in Farmington. He was born on September 14, 1935 to Frank and Angeline Prozzillo. Mr. Prozzillo was a graduate of St. Peter's Catholic School and WVU, where he was a member of …