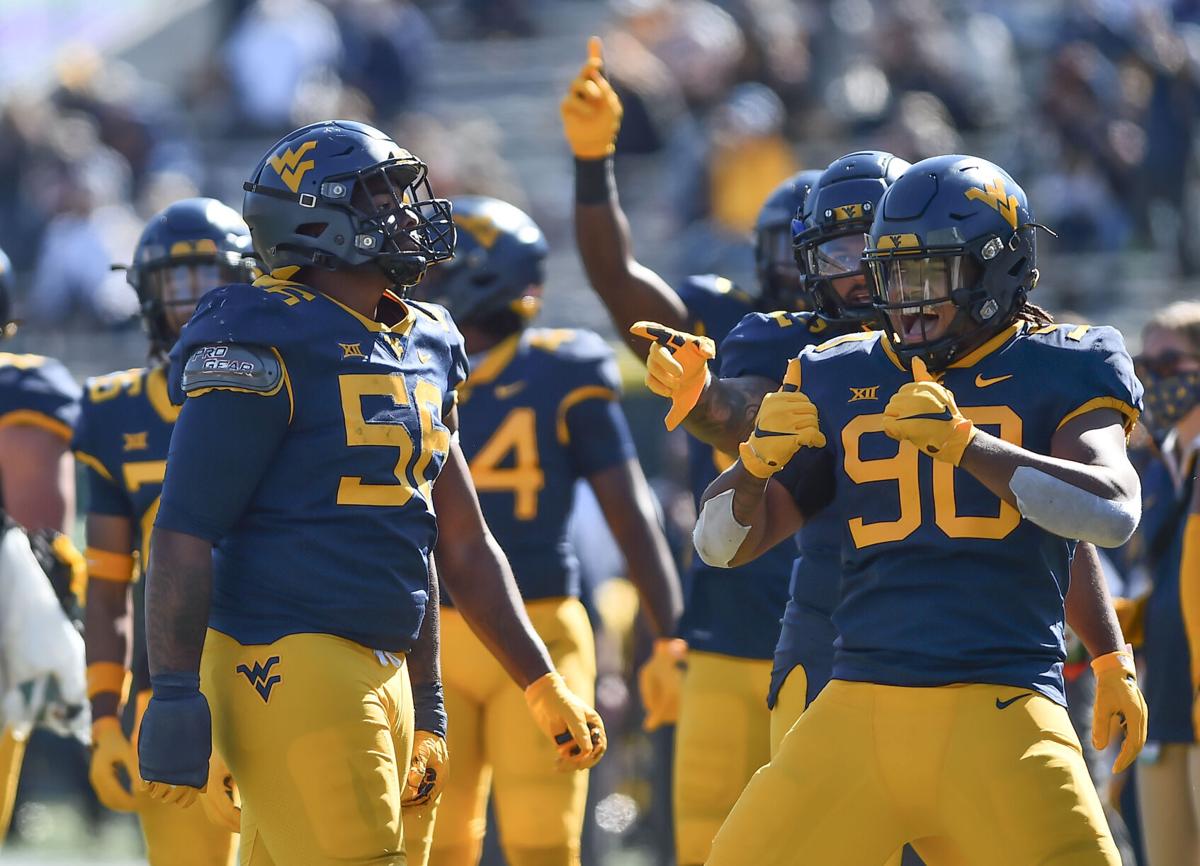 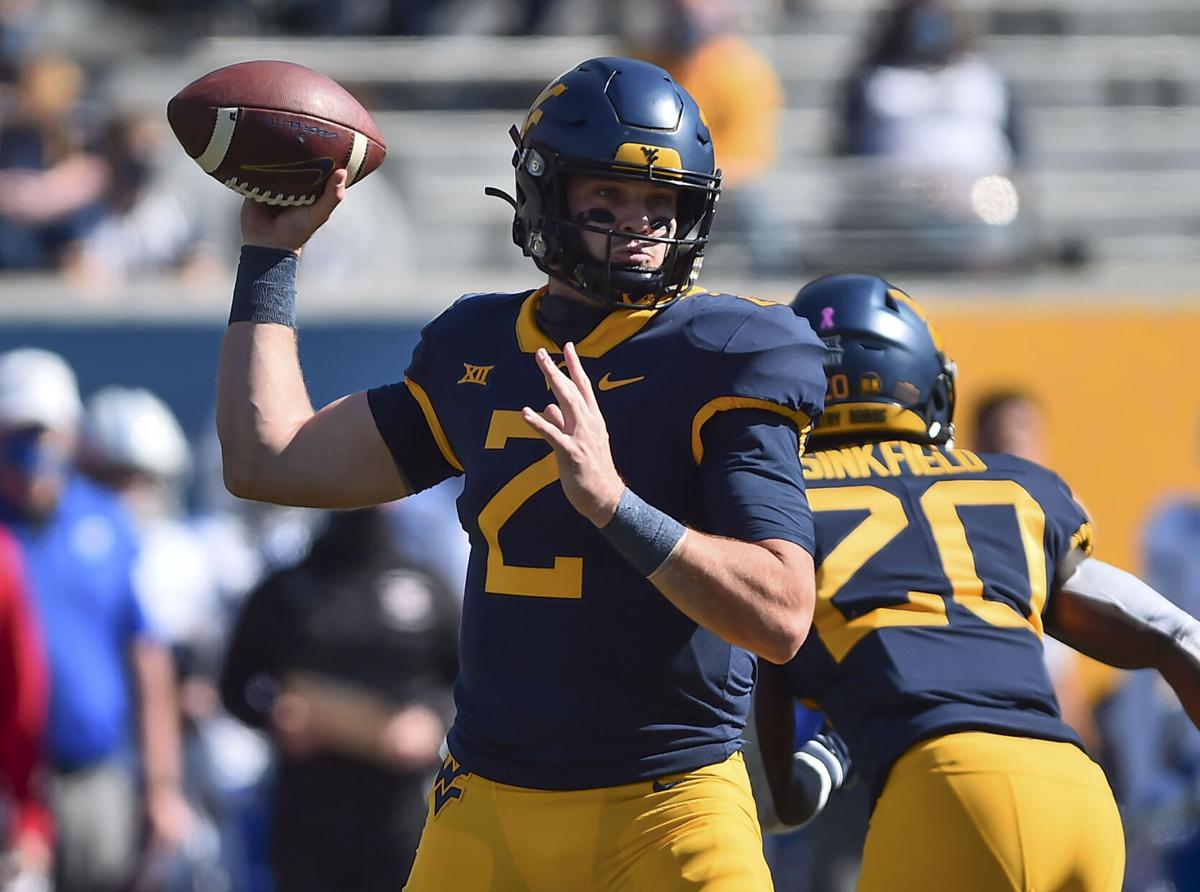 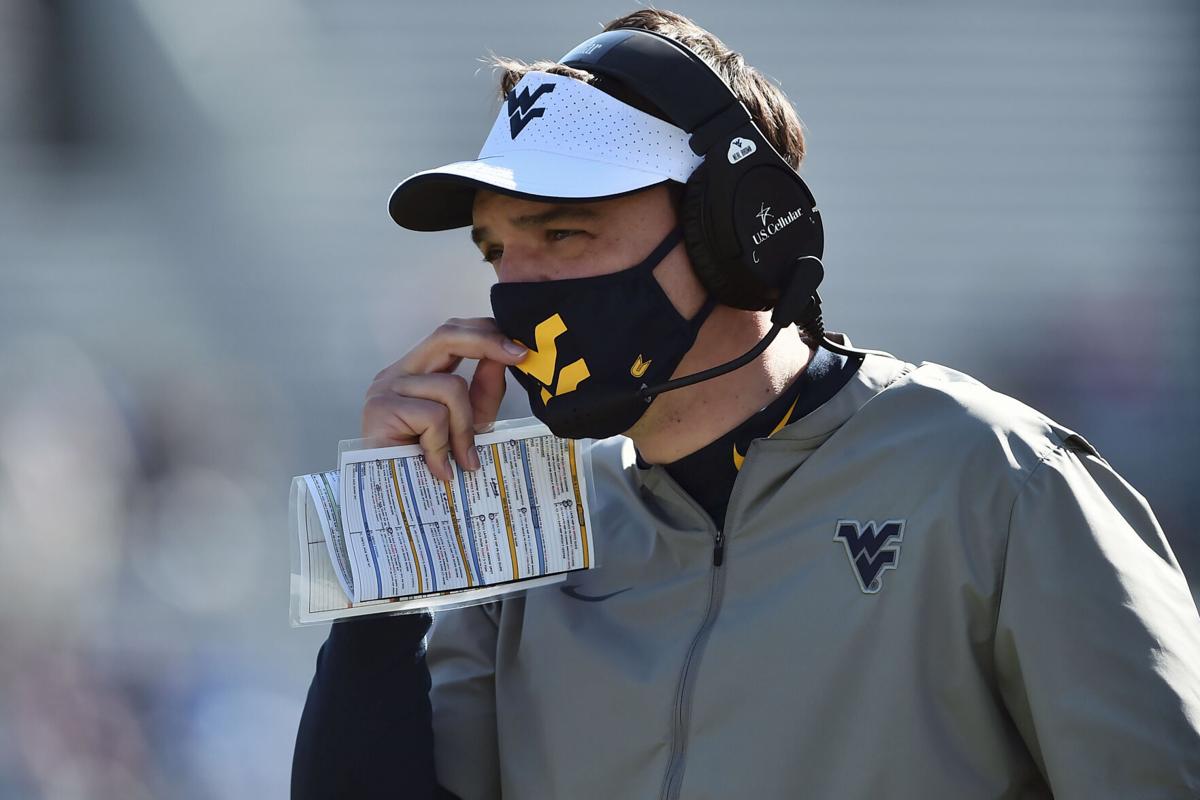 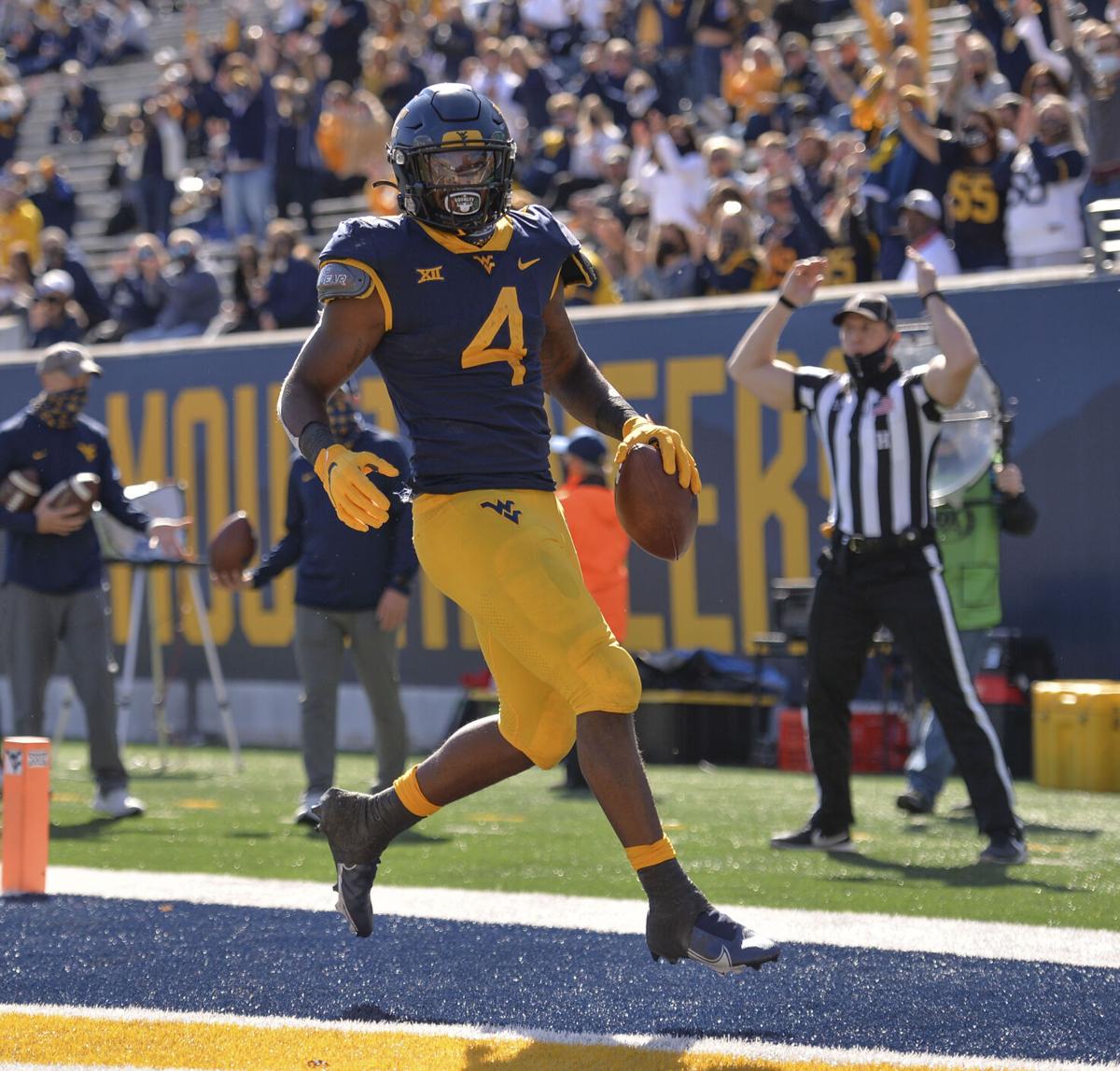 West Virginia running back Leddie Brown (4) scores a touchdown against Kansas during an NCAA college football game, Saturday in Morgantown. 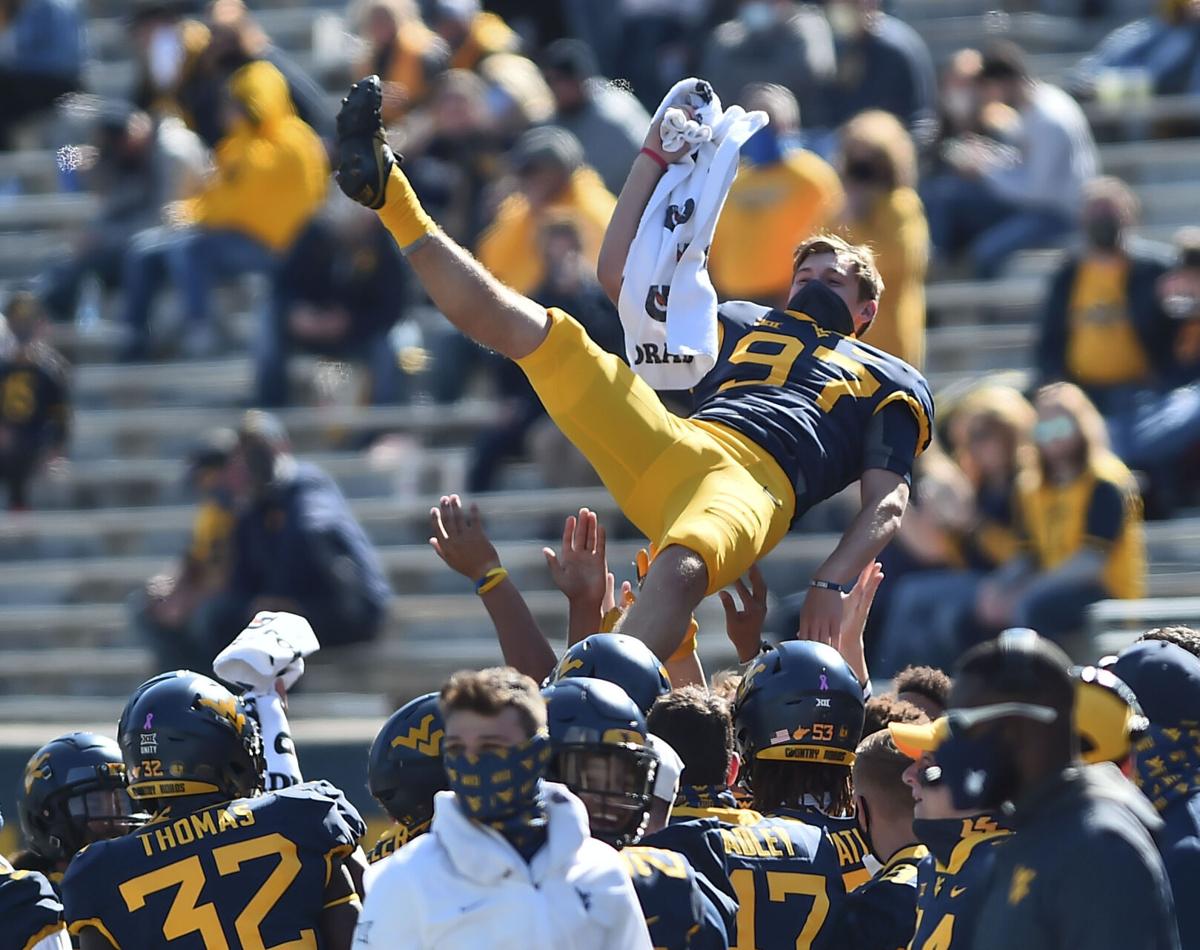 West Virginia players toss place kicker Danny King (97) into the air after a score against Kansas during an NCAA college football game Saturday in Morgantown. 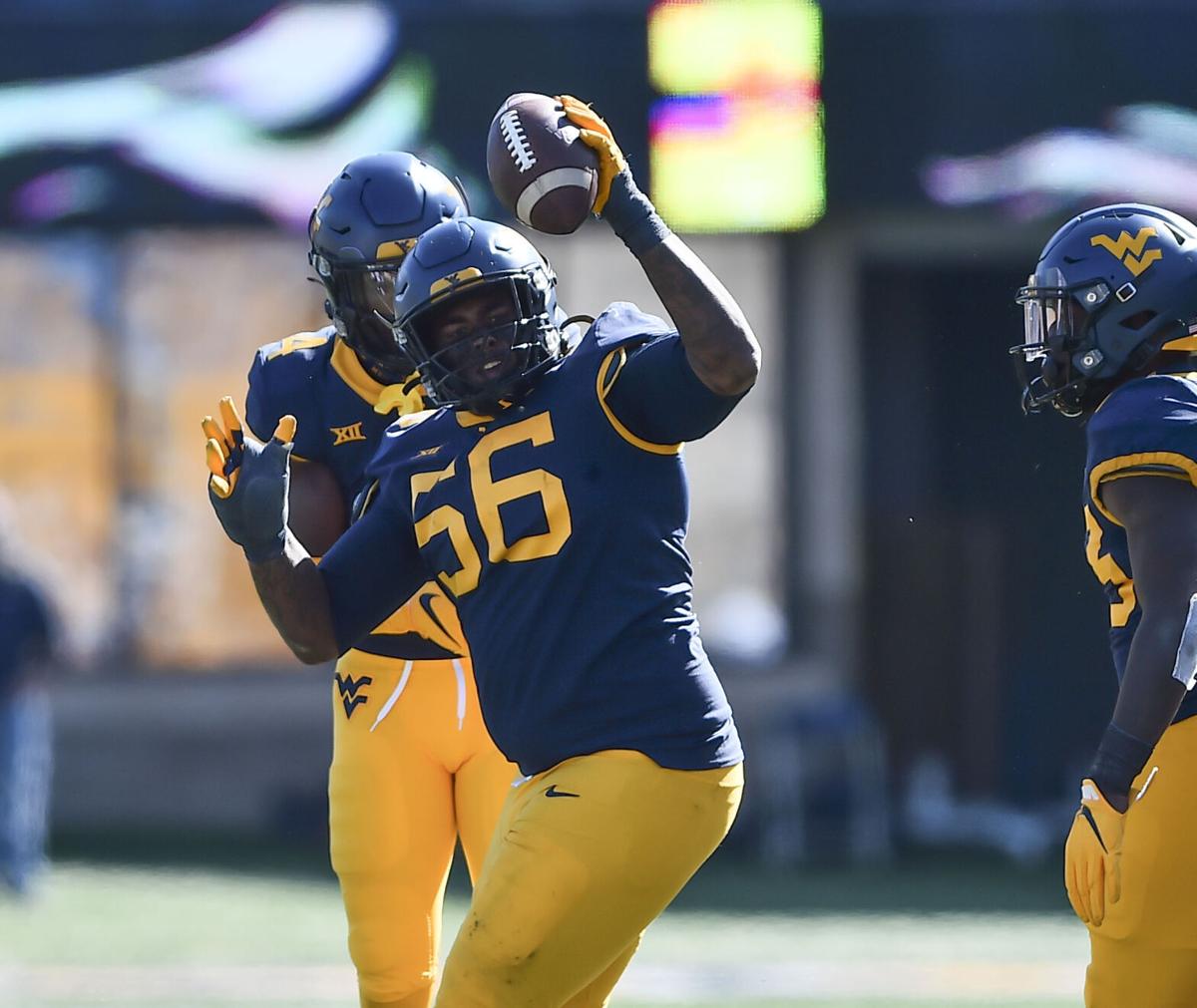 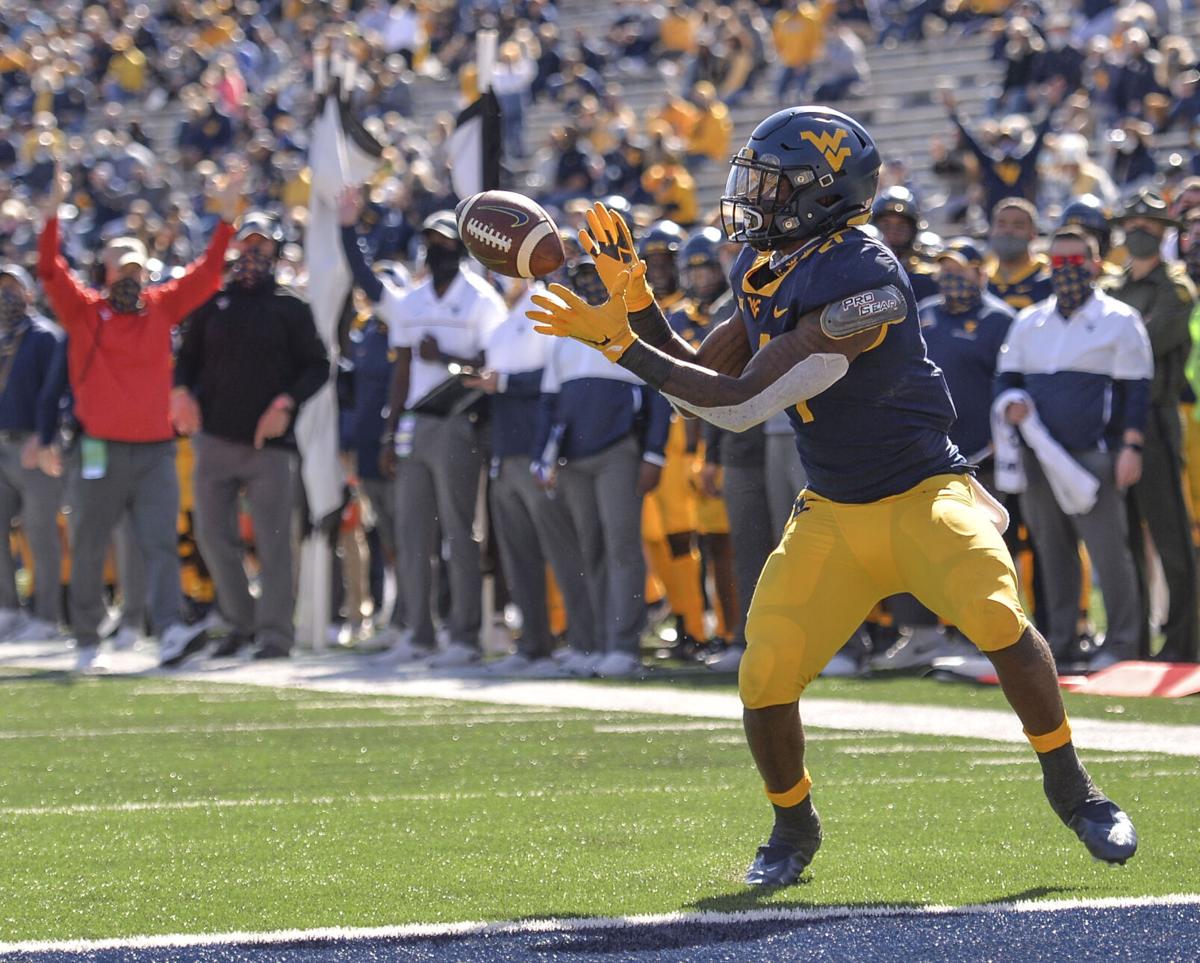 West Virginia running back Leddie Brown (4) makes a catch for a touchdown against Kansas during an NCAA college football game, Saturday in Morgantown. 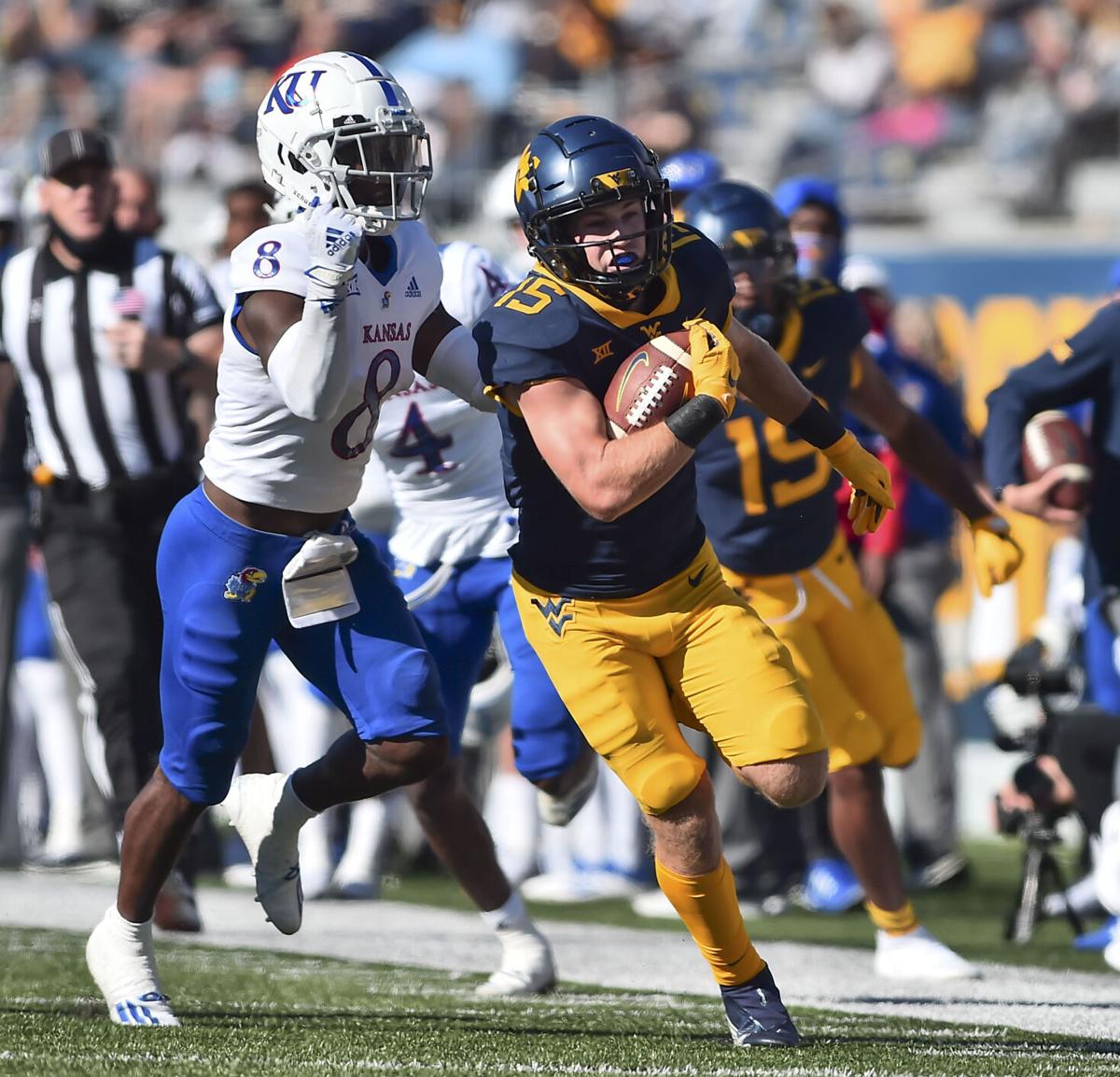 West Virginia running back Leddie Brown (4) scores a touchdown against Kansas during an NCAA college football game, Saturday in Morgantown.

West Virginia players toss place kicker Danny King (97) into the air after a score against Kansas during an NCAA college football game Saturday in Morgantown.

West Virginia running back Leddie Brown (4) makes a catch for a touchdown against Kansas during an NCAA college football game, Saturday in Morgantown.

MORGANTOWN — Fans finally returned to Mountaineer Field on Saturday and you can guess with lowly Kansas as the opposition, they were expecting to be rocking and rolling early to the beat of the Pride of West Virginia celebrating Mountaineer touchdowns.

Like why not? Kansas was 0-3, had lost 50 straight Big 12 road games and the Mountaineers were 2-1 and coming off a Big 12 victory over Baylor and were considered 23-point favorites.

But you have to remember that this is 2020 and nothing goes the way it should as Kansas jumped out to a 10-0 lead against a WVU team that closed out the first quarter with minus-16 rushing yards and five dropped passes to say nothing of a trio of penalties.

A year ago, who knows what the reaction would have been, this is a different team and Neal Brown knows far more about his team now. He made some alterations to the running game, gave Leddie Brown a dose of You Can’t Tackle Me Juice and turned loose a ferocious defense once again and put together a 38-17 victory over a spunky but overmatched Kansas team.

“I thought our fans were into it. I apologize for not giving them anything to cheer about early. The players and staff, though, responded to adversity. I’m not sure that we would have responded like that last year.”

If there were a game ball to hand out, it would be the game ball that Leddie Brown carried on the play of the game.

There was 3 minutes and 35 seconds left in the third quarter, WVU nursing a 7-point advantage, and it was 3rd and 1 at the Mountaineer 13.

They put Brown into get the first down.

He got a whole lot more, breaking loose up the middle for an 87-yard touchdown run.

The last time anyone ran 87 yards for a touchdown was a fellow wearing No. 7 named Noel Devine.

The last time anyone ran 87 yards for a touchdown as easily as did Brown was never.

The play was right out of the 1920s, just a hand-off up the middle but the line opened a crease big enough for Brown to go through untouched.

Brown’s eyes had to get as wide as Little Orphan Annie’s as he sprinted into the clear and went the distance.

“I seen a little crease.” he said. “I jumped through it and then I saw a whole bunch of green field. I just hit it.”

There was no defender in the middle of the field at all. He ran a straight line, looking like an Olympic sprinter.

“When I got to the 30 I started to peek up at the video board and I saw No. 9 was coming,” Brown said, but he did not have a chance.

That was the highlight of the day that will also stand as the highlight of his career. Brown rushed for 195 yards on 18 carries, 10.7 yards per rush. He scored one rushing touchdown and also on receiving, collaring five passes on a day when some wide receivers had the dropsies good for 35 yards.

He already — in four games — has surpassed his career high in rushing for a season and six games lie ahead and he seems to just be getting started.

“Leddie has gotten better as his practice habits have improved,” Neal Brown said. “He’s only going to get better. He’s in the conversation for the best backs in our league.”

He has given the Mountaineers a potent running game, which was something they lacked last year, but you can’t just credit him without noting the offensive line is now opening holes through which running backs can run.

The Mountaineers came into the game hoping to connect on some long passes and Neal Brown didn’t back off what he said about making that effort. The game’s first pass was a long one to Bryce Ford-Wheaton that he dropped.

“It’s frustrating not connecting on more of those long passes,” Ford-Wheaton said.” I think I have to capitalize on opportunities better.”

Which was something he did later in the first quarter when he latched on to a 33-yard scoring pass from quarterback Jarret Doege for WVU’s first score of the game.

Doege had an up and down afternoon. He had at least six passes dropped on him, Brown said it cost at least 75 passing yards, but for the game he finished with 26 of 44 for 316 yards — his first 300-yard game — with three touchdowns and an interception.

“I thought Doege played much better. The interception he threw was on a screen pass. That’s one he’d like to have back, but goes for 318 yards. We tried to throw the ball downfield. Some of them were successful, some weren’t. We have got to continue to get better in that aspect. We’re getting close,” Brown said.

And while the offense cranked up from the second quarter on, the defense remained a powerful force. Kansas gained only 157 total yards, 95 in the air and 62 on the ground. They had only one offensive touchdown, that off a tipped pass, and added another score late in the game when Pooka Williams ran a kickoff back 97 yards for a touchdown.

While Leddie Brown was clearly the offensive star, the defense had a monster day from any number of players — Josh Chandler with nine tackles and a pass break up, Tykee Smith had eight tackles, two for a loss and pass break up, Jeffery Pooler had six tackles, four solo, two sacks and two-and-a-half for a loss.

And then there was defensive player of the year, Darius Stills — the nose guard — laying full to make a diving interception of a pass tipped by Tykee Smith.

And finally, freshman defensive lineman Akheem Mesidor, who the coaches believe is a budding star, had six tackles, five solo, two sacks and 2.5 tackles for losses.