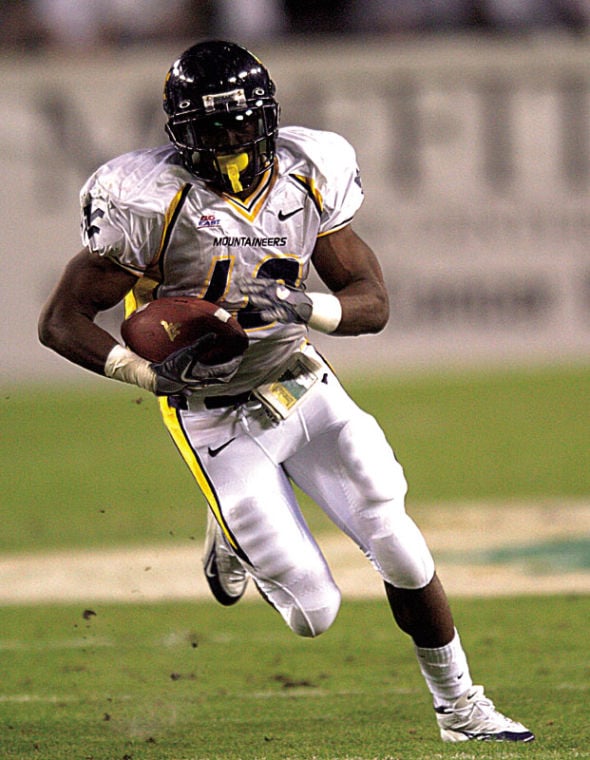 In this 2014 file photo, West Virginia University running back Steve Slaton has a clear lane up the field after taking a handoff in a game. 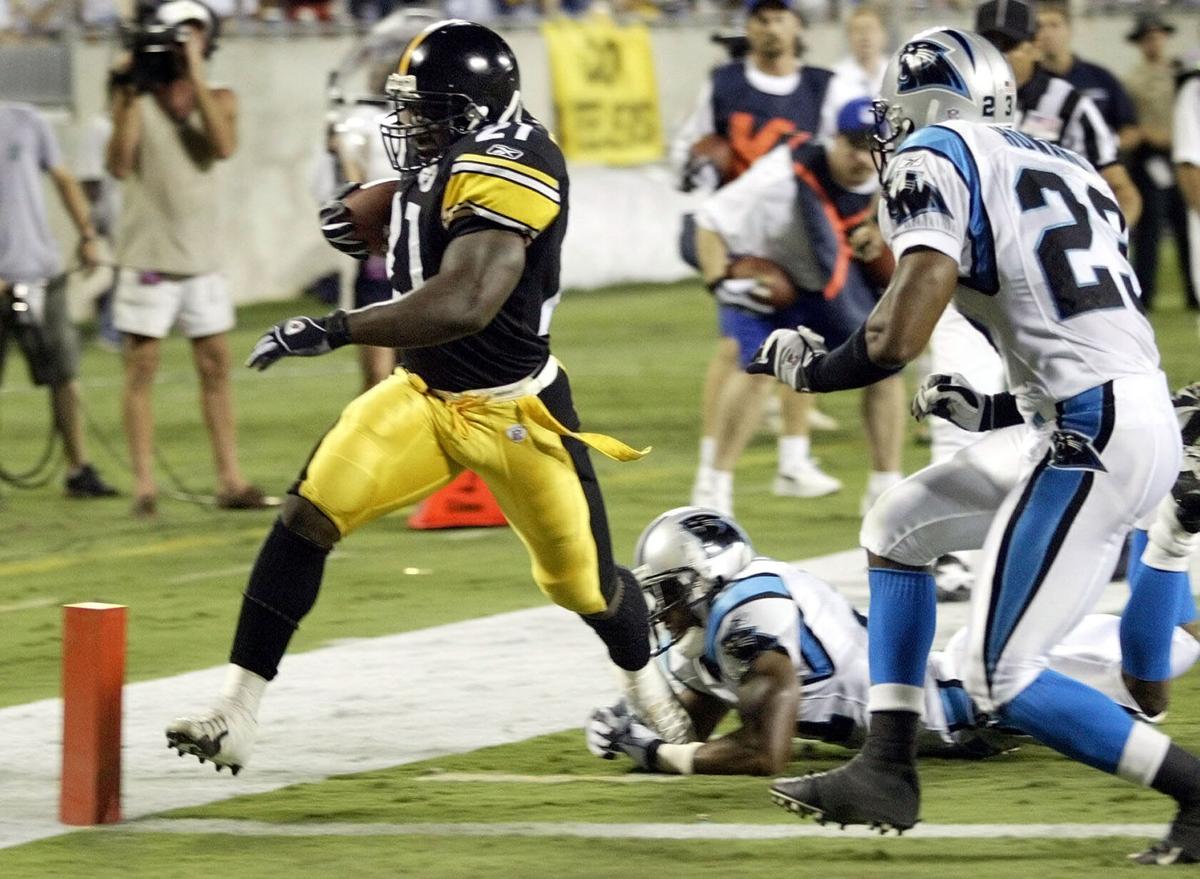 Pittsburgh Steelers’ Amos Zereoue, a former WVU running back, scores during a game against the Carolina Panthers in 2003.

In this 2014 file photo, West Virginia University running back Steve Slaton has a clear lane up the field after taking a handoff in a game.

Pittsburgh Steelers’ Amos Zereoue, a former WVU running back, scores during a game against the Carolina Panthers in 2003.

MORGANTOWN — Without any football games to look at in the heart of the COVID-19 pandemic and with the prospect of college football starting up in the fall still shaky at best, it has become necessary to create our own football competitions.

That’s far better use of social media than drudging through political character assassinations and pet pictures, although pets are far cuter than any politicians in the public eye.

So it was that we held a 16-man contest to find your favorite West Virginia running back of the modern era and, considering how Don Nehlen and Rich Rodriguez liked to run the football, it was a strong field.

Surviving the first round in which we had eight groups of four backs each to get to an Elite Eight were Amos Zereoue, Avon Cobourne, Noel Devine, Steve Slaton, Owen Schmitt, Kay-Jay Harris, Quincy Wilson and the entry of Rushel Shell and Dreamius Smith who tied in their voting.

So we played off the Elite Eight and wound up with a Final Four of Zereoue, Cobourne, Slaton and Devine, who barely edged Quincy Wilson, 54% to 46%.

The Final Four matched up Zereoue and Devine in one bracket and Cobourne and Slaton in the other, leading to a Final of probably the two most exciting and productive running backs in WVU history, players who on the surface seemed quite different yet had a number of striking similarities.

Oh, yes, they were different.

Anyone would be different than Zereoue, who was straight off the pages of a body building magazine.

The school listed Zereoue at 5-foot-10 inches tall, which was generous at best. Look at it this way, when he went to the Pittsburgh Steelers as a third-round draft pick after bypassing his senior year, he was listed a 5-8, making him “The Incredible Shrinking Man.”

WVU also listed Zereoue at 200 pounds at WVU, but to be honest, his thighs weighed that much.

He was power, then speed.

Slaton, on the other hand, was far more speed than power … each represented the offensive philosophies of their coaches. Nehlen was more of an old-fashioned, I-formation power guy while Rodriguez built a team around speed, speed and more speed.

Zereoue was a lone back in the backfield, really, as far as carrying the ball went, which meant defenses would key on him in the running game.

For example, when WVU played before 80,000 fans at Notre Dame in 1997, Zereoue carried 32 times, fullback Leroy White carried twice and back up tailback Curtis Keaton carried once.

When the Mountaineers played Georgia Tech in a bowl game that same year, Zereoue carried the ball 17 times and no other running back touched, quarterback Marc Bulger who carried five times, mostly running for his life from the pass rush as he lost 28 yards on those “carries.”

Slaton, on the other hand, had Owen Schmitt to keep teams honest on the inside and as a crushing blocker for him and had what was up until that time in college football the game’s greatest running quarterback ever in Pat White.

There was a difference between Slaton and Zereoue, too, in that Slaton played on teams that were more successful than Zeroue’s teams.

In three years, Zereoue’s teams went 23-13 and lost all three minor bowls they played in while Slaton’s teams went 33-5 with victories over Georgia in the Sugar Bowl, over Georgia Tech in the Gator Bowl and the stunning upset of Oklahoma in the Fiesta Bowl, although Slaton was hurt on his first — and only — carry of that game.

A third difference was their arrival on campus.

Zereoue was one of the greatest players Long Island, N.Y., ever produced, setting a Long Island record of 5,360 yards and 59 touchdowns at Mepham High while twice winning the Thorpe Award given to Nassau County’s best player, an achievement that neither the immortal Jim Brown nor Matt Snell matched.

While Slaton was a high school star in eastern Pennsylvania, where he rushed for more than 6,000 yards and 73 touchdowns and was highly recruited. He originally chose Maryland but at the end of recruiting, the Terps opted to give his scholarship to a player named Morgan Green.

That turned him loose for WVU, who at first wanted him as a defensive back, a situation that did not last long once Nehlen saw him with the football in his hands.

Both players enjoyed early success, Zereoue became an immediate sensation when he took a handoff form Chad Johnston on his first college carry and took it 69-yards to a touchdown against Pitt in the opening game of the 1996 season.

Slaton took a bit longer to make his mark, carrying in just one of the Mountaineers’ first four games before finally getting a chance against Virginia Tech, where he carried 11 times for 90 yards, following that up with his first collegiate 100-yard performance by gaining 139 yards against Rutgers.

But it was in the Louisville game, which also was White’s coming out party as he came off the bench and joined Slaton to lead WVU back from a 24-7 fourth-quarter deficit to win 46-44 in three overtimes.

All Slaton did that day was gain 188 yards on 31 carries while scoring five running TDs and also a received score. The six TDs were a school and Big East record while the game announced the arrival of WVU as a national power.

Slaton ended the season giving himself a national name as he led the Mountaineers to a thrilling and stunning upset of Georgia in the Sugar Bowl — played in Atlanta due a hurricane in New Orleans. He set the Sugar Bowl rushing record of 204 yards on 26 carries, then the second top rushing performance in BCS bowl history, also scoring three touchdowns, two on a pair of 52-yard runs.

Strangely, that would be the only standout bowl game of the six Slaton and Zereoue played in — the two combined for just 168 rushing yards on 64 carries, a 2.6 yard per carry average, with two touchdowns in the other five bowl games in which they played.

Their pro careers were somewhat similar, Zereoue played seven years, Slaton five, Zereoue rushed for 2,157 yards with 10 TDs and a career 3.9 average per carry while Slaton rushed for 1,896 yards, a 4.3 average with 13 touchdowns.

There was one other similarity. After his career was over, Zereoue opened a restaurant in New York and Slaton went to culinary school and became a chef.

So who was your favorite WVU running back?